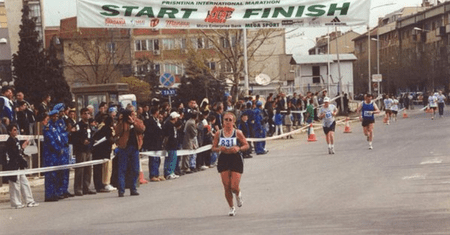 Image courtesy of the Prishtina Half-Marathon

The Kosovo selection of our Global Anthology has been published with permission by author Jeton Neziraj and translator Alexandra Channer.

The ambulance was driving Shamim, a patient from Bangladesh, from his room in the neighbourhood of Dardania, in Prishtina, to the Medicus Clinic, located on the outskirts of the city. Shamim was going back to the clinic after an unexpected complication that occurred two days after he had sold his kidney. The ambulance drove along Mother Theresa Street, turned onto Bill Clinton Boulevard, and then took the road out of town.

The ambulance had turned on its sirens and was moving fast. Sweat was beading on Shamim’s waxy face. He gripped the edge of the stretcher with his hand and tried to endure the pain. After the operation they had told him that everything would be all right, but there had been a complication, and instead of being on a plane going home, which is where he would have liked to be, he was now in an ambulance rushing him back to the clinic. It weaved between the cars that let it pass, but the road was blocked at the main roundabout near the Hotel Victory. Two uniformed policemen had put up a red cordon here, and were asking the cars to wait because, as they said, “something important was happening in town.”

About 30 marathoners, all women, were running downhill along the road toward the finish line. People on both sides of the road were clapping, encouraging the runners to keep going. There wasn’t much further to go. Two kilometres at most. Near the finish line, there was a small podium, and on it there were various important people, from politics and society, including the President of Kosovo.

This was a historic event for all of Kosovo. Not only was it was the first marathon organised since the war, but it was Kosovo’s first-ever all-women race. Kosovo Radio Television was even broadcasting the marathon live. Among the marathoners was Lola, the famous anchor of Kosovar Chronicles, an investigative TV program known for uncovering scandals. It was watched by everyone, including, of course, the president.

When the ambulance approached the cordon, one of the policeman gestured to the driver to stop and wait. The marathon had to finish; Kosovo needed a winner that day. Shamim gritted his teeth and tried to hold himself together, but he was losing strength. The doctor accompanying him in the ambulance was encouraging him.

“Everything is going to be alright, Shamim, everything will be alright. After this sort of operation, complications are possible. But, it will all be fine. Do you have a family?”

Shamim wanted to answer, but he had neither the strength nor the words. He looked at the doctor, but could only groan faintly. And then he thought about the European man, Frank, to whom he had sold his kidney two days ago. He imagined him opening the door and going into his garden, a garden full of lovely flowers. To one side, by the door of the house, his wife and young daughter were waiting. Shamim opened his eyes again, he looked at the doctor, he took his pulse. Shamim tried again to think about Frank, but he couldn’t.

The ambulance. The female marathoners. The crowd. The police. The red cordon. Shamim. Frank. The kidney. The president.

The ambulance driver hooted his horn again, and one of the police gestured to him to stop, because as he said, the marathon would be over soon and one woman runner would be victorious.

All the women sprinted with an extra burst of energy, and so did Lola. Sweat poured onto the tarmac of that main road in Prishtina, the one that led to the Medicus Clinic.

The president stood up and cheered Lola on, then turned to someone near her:

“This is new tarmac, recently laid, we inaugurated it just one week ago, together with the minister of transport.”

Lola was leading the 29 other women. She was about 10 steps ahead of them.

“What the hell is going on? They’ve blocked the main road for a useless marathon. And not for real marathon runners, but for a bunch of girls. Since when did women in this country start running marathons? Is this really the most important thing they need right now? Fine, let them run, let the ladies run, but couldn’t they have at least planned the route somewhere else? Eh? I can’t believe it. This place is going downhill, Shamim. Things shouldn’t happen like this, damn it. If this job was different—if you weren’t here illegally—I would get out of this ambulance right now and grab that policeman by the throat. I wouldn’t care at all about this marathon. A man’s life is worth more than ten, hundreds, or even thousands of marathons, Shamim. But, since we did this job illegally, I have to restrain myself, I have to keep quiet and wait. And you have to wait too. Hang in there, Shamim, hang on, you’ll make it.”

The ambulance driver honked his horn again, and then the Kosovo policeman frowned, took off his hat and went over to the ambulance.

“What’s the rush? Can’t you see you cannot pass?”

“I have a man who is ill. I have to take him to the clinic.”

“The marathon will be over soon, in a few minutes at most. I’m afraid we can’t stop the marathon. We have to have a winner tonight in Kosovo.”

Only when the policeman finished his explanation did he ask about the patient in the ambulance, the wretch inside who tossed and turned, fighting for his life.

The driver was forced to lie. The president had signed a law five years before that made organ transplants illegal.

Lola crossed the finish line. She raised her hands in victory and then threw herself into her husband’s arms, who had been joyfully waiting for her. Finally, one of the policeman removed the red cordon blocking the road. The ambulance moved off, fast. Lola, the investigative journalist, won the race, that long and historic marathon. Kosovo had a winner that day, but Shamim never knew. He died two minutes before arriving at the Medicus Clinic. At 5:03 pm, to be exact.

The president congratulated Lola, and then she put a medal around her neck. Everyone watched this very special moment, all of those who were there that day as well as the others, who were watching the marathon on the television. And then, Lola spoke:

“I dedicate this medal to my country. Thank you, everyone. This country is going to make it, just as we’ve always dreamed. Now, let’s get to work.”

Shamim’s body was deposited in a forest long after night had fallen. There was no other way. He had come to the country illegally, every trace of his existence had to be erased. All that remained of him was his kidney… somewhere in Europe, alive… It functions well and Frank feels good with it.

Translated from Albanian by Alexandra Channer. Read our interview with Jeton Neziraj here.