The Best Things to See and Do in Palermo 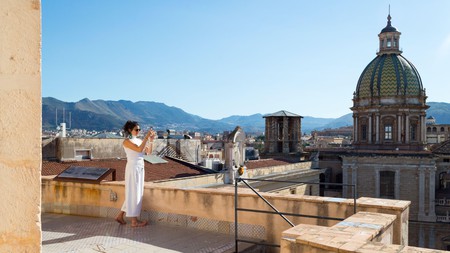 The capital of Sicily, Palermo sits at the edge of Europe and at the heart of the ancient world. Its centuries-old, cultural mix means you’ll find souk-like markets and mosaic-tiled churches, alongside the best Mediterranean street food and bars that deliver a knockout Aperitivo Hour.

Surrounded by mountains on Sicily’s northwestern coast, Palermo was founded by Phoenician traders in the 8th century. It’s been shaped by many different cultures over the centuries, from Greek and Roman to Byzantine and Arabic – a legacy that’s reflected in its varied cuisine and architecture. Here’s our pick of the best things to see and do in the Sicilian capital, from snooping backstage at Italy’s largest theatre to visiting a catacomb populated by 8,000 human skeletons.

See all the essentials in Palermo, as well as the rest of Sicily, on the 10-day Best of Sicily Tour with Culture Trip.

Marvel at the Cattedrale di Palermo 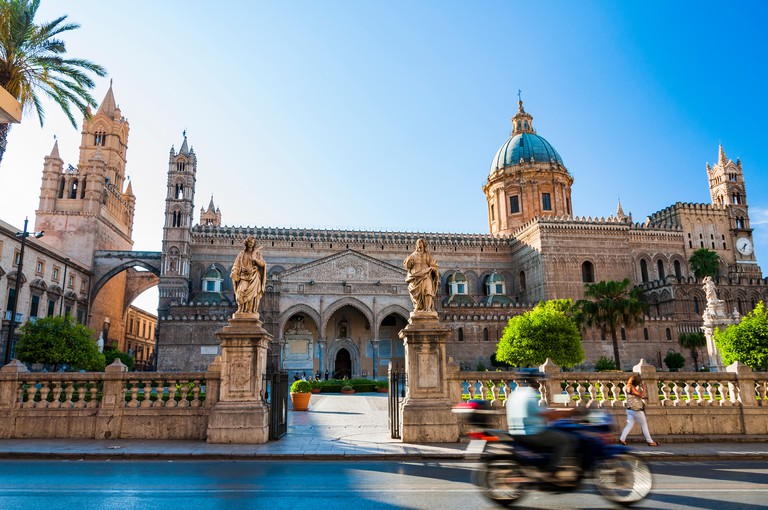 © M Ramírez / Alamy Stock Photo
Palermo Cathedral was built by Sicily’s Norman rulers towards the end of the 12th century, on the site of a Byzantine church that served as a mosque in the 800s. You can spot the Arabic origins in the far left column of the portico. Highlights inside include the ornate tombs of Emperor Henry VI and his son Frederick II, and a golden tiara that belonged to Frederick’s wife, Constance of Sicily.

Cafe, Restaurant, Italian, $$$
Facebook
Email
Twitter
Pinterest
Copy link
Share
Situated a few streets back from the port, opposite the Massimo Opera Theatre, Vespa Café is one of the best places in town for an early evening drink and snack. Sit at one of the tables on Via Orologio and order an Aperol spritz and the sharing platter, easily enough for two people. The contents are decided for you, depending on what the kitchen has available that day – but are likely to include olives, mini burgers, some kind of pasta dish and breadsticks.

Peek inside the Catacombe dei Cappuccini

Mummified corpses line the walls at the Capuchin Catacombs, a series of underground burial chambers, housing the remains of 8,000 monks and Palermitans. Laid to rest between the mid 16th and early 20th centuries, these macabre attractions are pinned to the wall and dressed in attire specified in advance by their former occupants. Particularly spooky is the amazingly well-preserved corpse of Rosalia Lombardo, who died in 1920 at two years of age. No photography is allowed inside.

Each of Palermo’s neighbourhoods has its own market, but the three biggest are Vucciria, Ballaro and Capo. Viccuria is the scruffiest and extends down Via dei Frangiai. Ballaro, on and round Via Dalmazio Birago, is the largest and best for street food. Capo clogs Porta Carini and Sant’Agostino streets with stalls selling everything from spices and olives to fish, meat and vegetables. Stop frequently for buffitieri (hot snacks that are meant to be eaten on the street).

For a bite-on-the-go, head to this typical Palermitan bakery, situated down the road from the Piersanti Mattarella Park (or English Gardens). As well as a great selection of freshly-baked loaves and sweets, it serves up some of the best Sicilian-style pizza in town. Named sfincione, it’s a rectangular slice of thick focaccia, usually topped with tomato sauce, onions, herbs, cheese and anchovies. Order a slice or two to take away and find a shaded spot in the Mattarella. 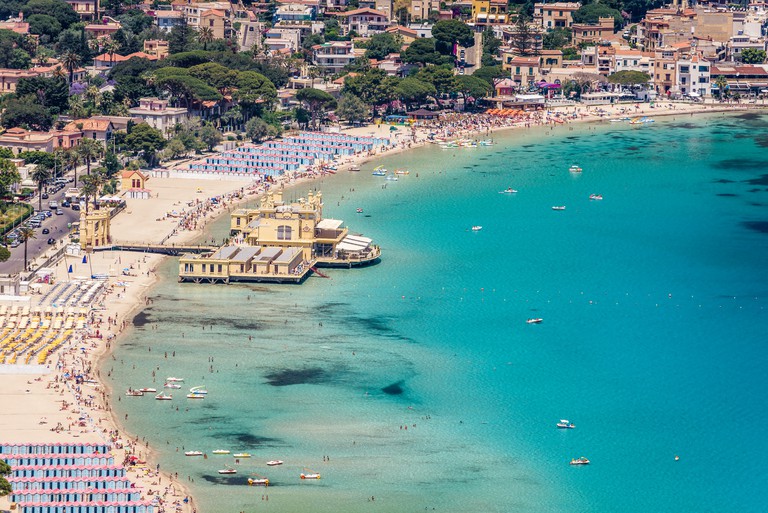 © Roberto La Rosa / Alamy Stock Photo
The top weekend beach for Palermitans, Mondello is situated a 20-minute drive north from Palermo, just outside the Capo Gallo Natural Park. A spacious curve of white sand lapped by calm, transparent waters, it’s the perfect setting for swimming, tanning and admiring Mount Gallo. After a day under the rays, head to Touring Beach Cafe for snacks and cocktails on a waterfront terrace. Mondello quickly becomes crowded during high season, so arrive early to claim your space.

Feast on arancini at Bar Touring

Simple, canteen-style Bar Touring is situated a 45-minute walk from central Palermo, but it’s worth the trek to taste the arancini. These are deep-fried rice balls, usually filled with pea and ham risotto or mince slow-cooked in tomato sauce. Here, they’re absolutely enormous, golden and crispy on the outside and creamy within. Follow with a slice of home-made pistachio cake, an espresso or one of the many flavours of gelato available.

Watch the opera at Teatro Massimo 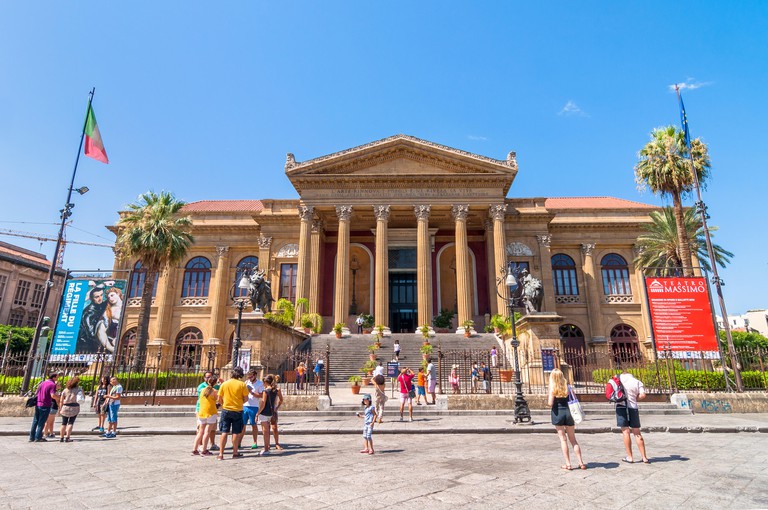 © Eddy Galeotti / Alamy
Opened in 1897 with a performance of Giuseppe Verdi’s Falstaff, Teatro Massimo lies at the heart of Palermo’s cultural scene. The five-storey-high building is the largest theatre in Italy, with capacity for 1,247 spectators. Experience its flawless acoustics by attending an opera or ballet performance – there’s something on at least every weekend. Explore the building on one of the guided tours, which take you around the auditorium, the backstage area, the sitting room of the Royal Box and up to the rooftop terrace.

Now serving as an ostentatious headquarters for a training and research company, this pink gothic castle was originally built as a luxury hotel for entrepreneur Michele Utveggio between 1928 and 1933. Perched atop the 350-metre (1,148 feet) Mount Pellegrino, it occupies a site offering views over Palermo and out to sea that Goethe thought were the most beautiful in the world. To decide whether you agree with the poet, visit the viewing platforms that surround the castle – it’s 90 minutes on foot from central Palermo.

Need somewhere to stay in Palermo? Book one of the best hotels in the Sicilian capital through Culture Trip now – and don’t miss the best local restaurants in Palermo on your trip.

This is an updated rewrite of an article originally by Luca Pinelli.