The Top 10 Things To Do And See In Catania 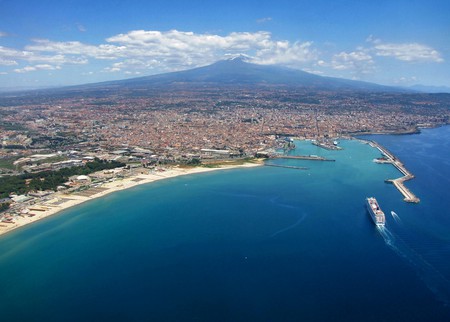 Catania is the second-largest city in Sicily and is located on the east coast of this Italian southern island. It is the perfect place for a holiday, considering its cultural importance, its position and weather, and its enchanting views of past and present alike. There are so many things tourists should do that it might become bewildering to spend a couple of days in this wonderful city, so here are ten priorities you should definitely make time for. 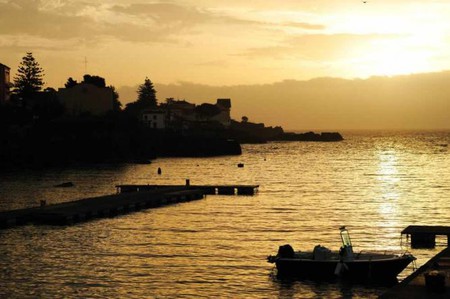 A triumph of Baroque style, this square boasts several buildings which tourists cannot miss. Palazzo dei Chierici, built at the beginning of the 18th century. Palazzo degli Elefanti, now the Town Hall, and the Duomo di Catania, the cathedral of the city. At the center of the square lies the ‘Elephant Fountain’ which bears the symbol of the city, a small elephant, which in turn supports an obelisk. Next to Palazzo dei Chierici there is another fountain, the ‘Fontana dell’Amenano’, dedicated to Amenano, a subterranean river since the eruption of Etna in 252 BC, and one of two rivers which run through Catania. 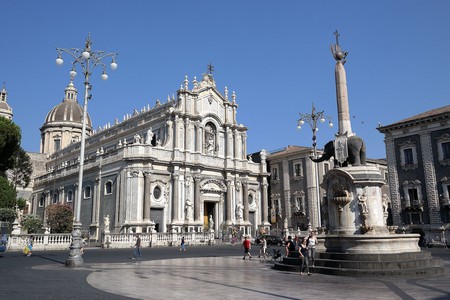 This is possibly the most renowned beach in Catania. The presence of black rocks and ashes as a result of volcanic activity makes San Giovanni li Cuti the most characteristic natural place in the city. In the summer it welcomes locals trying to escape the heat of the city to bask in the beautiful sea air. It also harbors several wooden boats which are still employed by local fishermen, thus making this place a cultural as well as a natural point of interest. 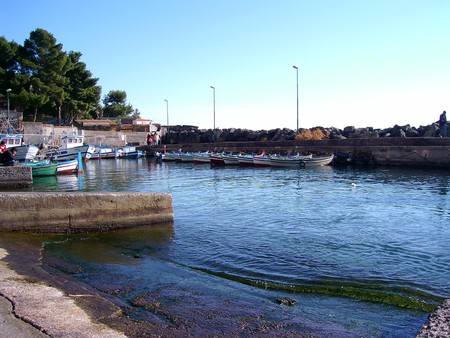 Built in the later half of the 13th century, this castle survived an earthquake in 1693, and before that a volcanic eruption in 1669, when the lava flow from Mount Etna came so close as to fill the moat. Over the course of its dramatic existence it has been used to accommodate the Aragonese dynasty, and later became a famous prison. Today it houses the Civic Museum of Catania and has done so since 1934. The castle has a rectangular plan, with a large circular tower at each corner. It features a courtyard surrounded by halls of architectural significance with archaeological remains, artefacts and artwork dating as far back as the Classical Era of Ancient Greece and Rome. 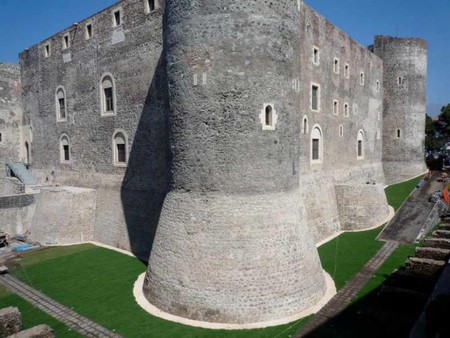 This surprisingly short street is lined with an incredible number of buildings definitely worth a visit. Besides the four churches, all designed and built in truly Baroque style, via dei Crociferi ends in the sumptuous Villa Cerami, which today houses the University of Catania’s Faculty of Law. The Church of San Benedetto deserves a special mention, with its beautiful paintings and frescoes and the innumerable lamps hanging down from the ceiling. The sheer quantity of artifacts housed in these churches is enough to warrant a visit. 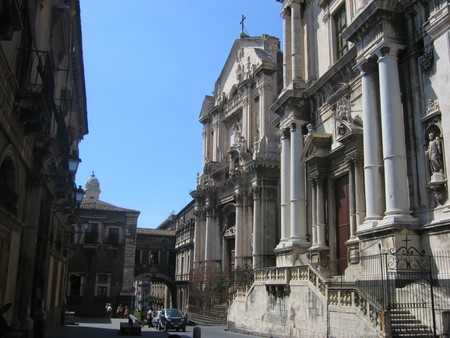 Dating back to the 2nd century AD, this theater has only partially been brought to light by excavations in the first half of the 20th century. It is made of lava stone, brick, and marble and maintains its oval shape. Whether you have a passion for archaeology and antiquity or not, this place must definitely be visited, preferably under direction of a guide who can revive the past for you. Parts of this amphitheater are still concealed under Piazza Stesicoro as well as under the nearby streets via Manzoni and via Penninello. 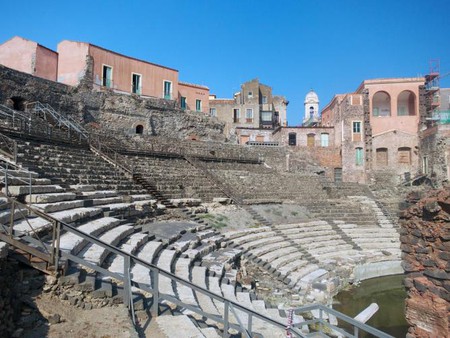 Located in the heart of the city, just a few meters away from Piazza Duomo, Catania’s fish market cannot be missed. Considering it is situated on the coast, the sea is a dominant part of the atmosphere of the second-largest city in Sicily and there is no better way to experience it than by strolling through this market. With its bright colors and peculiar smells, accompanied by the unabashed shouts of the fishmongers selling their wares, this is the best place in Italy to buy locally-sourced, quality seafood in an exciting, memorable atmosphere. 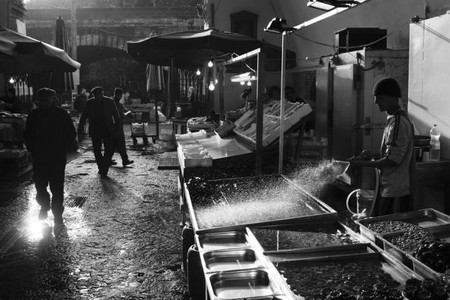 This street connects Piazza Duomo to the foot of Etna, the immense volcano casting its shadow over Catania. From the south end of Etnea, you can admire the elegant churches and palaces which line this street, all against the backdrop of the sublime Etna with all its natural grandeur. Moving on from Piazza Duomo, tourists can see Piazza Università where the local Faculty of Arts of Humanities can be found, as well as Piazza Stesicoro, one of the most vibrant squares in Catania. There’s no better way to see Catania’s beauty than by walking up this street. 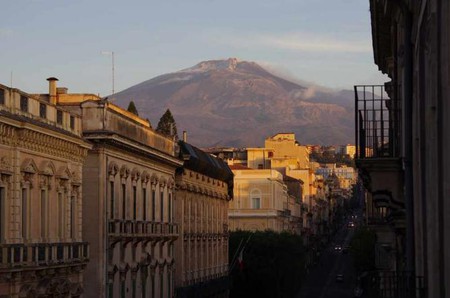 Morning on Via Etnea | SNappa2006/Flickr

The vast territory surrounding the volcano Etna is a protected National park, with paths running both around and up and down the mountain. It is possible to have a leisurely walk through the villages at the foot of the Mount Etna or even to climb to the top for those who wish to have an enchanting view of Catania and the Ionian Sea. Etna Park offers the best landscapes tourists can dream of, so it is definitely something to check off your to-do list. 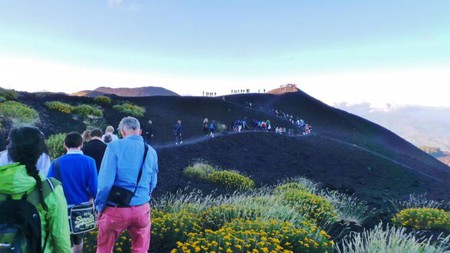 Besides being a hostel and restaurant with a fabulous wine bar, Agorà houses a natural lava cave with the river Amenano coursing through it in its basement. This is a river which was buried by lava centuries ago and which can be observed only in a few places scattered over the city. Agorà Hostel is one of these and is easily accessible owing to its central location and 24 hour opening times.

In 1693, an eruption struck the city and buried its 16th-century counterpart, which is still visible here and there in Catania. Two rivers, Amenano and Lognina, as well as a whole lake named Nicito were buried by lava, but several churches retain their access to this lower, older level of the city. It is still possible to visit sections of what has survived and is a must-see for those fascinated by the mysteries of the past. 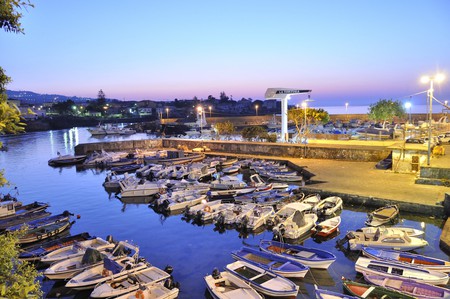