The Top Things to See and Do in Assisi 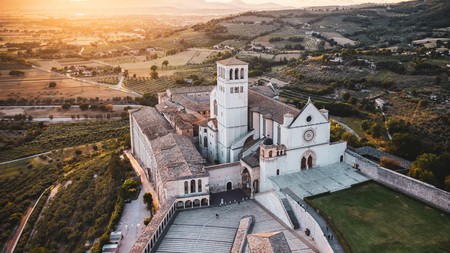 Best known as the birthplace of St Francis, one of Italy’s most famous patron saints, Assisi is a popular destination for pilgrims. Yet you don’t have to be religious to appreciate the town’s beautiful scenery, spectacular architecture and rich culture. Assisi is also a foodie’s paradise with mouth-watering meat, cheese and fine wine at the heart of town life. Here are the best things to see and do while you’re visiting this Umbrian city. 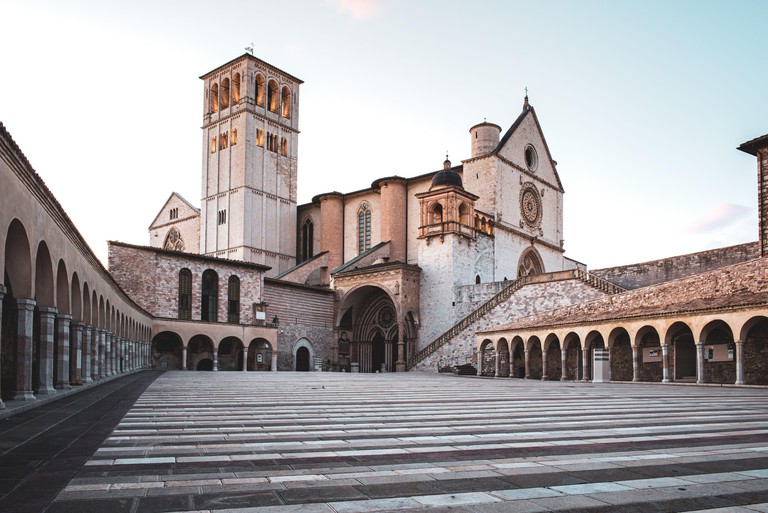 ©Alessandro Bosio / Alamy
The Basilica di San Francesco is the final resting place of St Francis of Assisi. It’s the jewel in the historical town’s crown. Made up of two 13th-century churches, the older Basilica Inferiore and the Gothic Basilica Superiore, the complex boasts numerous frescoes by Giotto and his fellow masters Cimabue, Lorenzetti and Martini. These include one of Italy’s most famous works of art – 28 frescoes depicting the life of St Francis. The Basilica’s Upper Square gives unrivalled views of Assisi’s skyline. 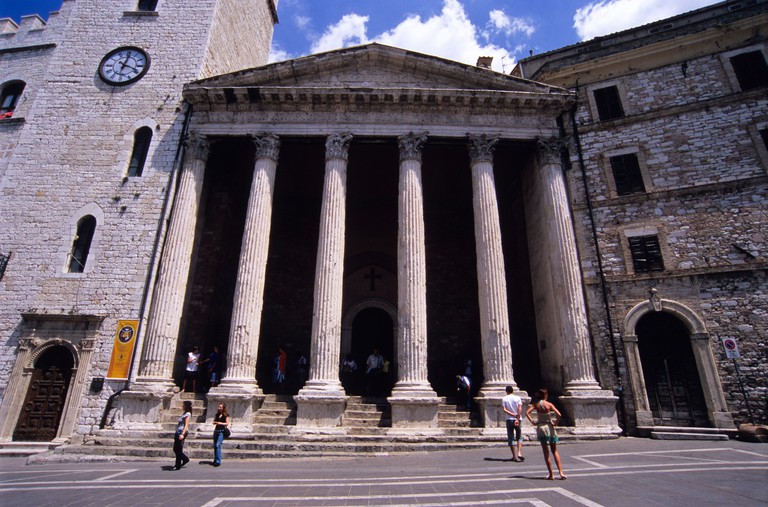 © yannick luthy / Alamy
Located in the heart of Assisi’s Piazza del Commune, the six columns of the ancient Roman temple, the Tempio di Minerva, are impossible to miss. Built during the reign of Augustus in the first century BC, the pagan temple was abandoned when Rome converted to Christianity. Later, it became the headquarters of the Commune of Assisi in 1215. Still standing after 2,000 years, the temple is now home to a church. 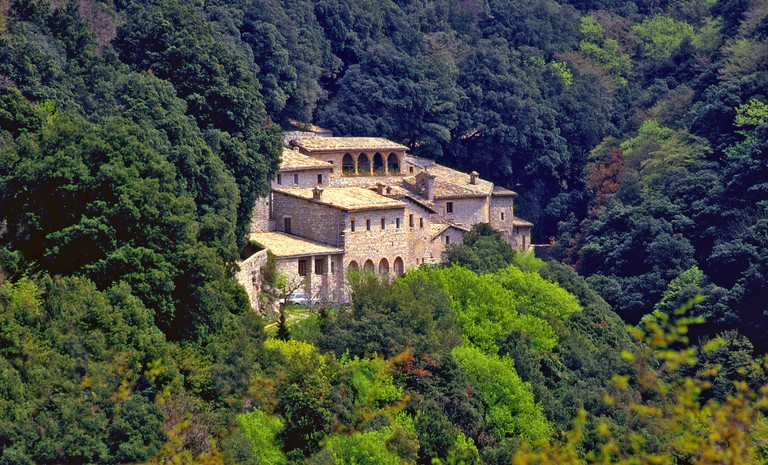 © lugris / Alamy
Mount Subasio Park has numerous trails, suitable for all abilities, so there’s no excuse not to put on your walking boots and immerse yourself in the Italian wilderness. The spectacular views from the summit take in the surrounding meadows, dense oak woods and hillside olive groves. You can also see Assisi itself, which was built from the rose rocks of the mountain. Along the way, you’ll discover Roman ruins, see wild orchids and perhaps hear a wolf in the distance. 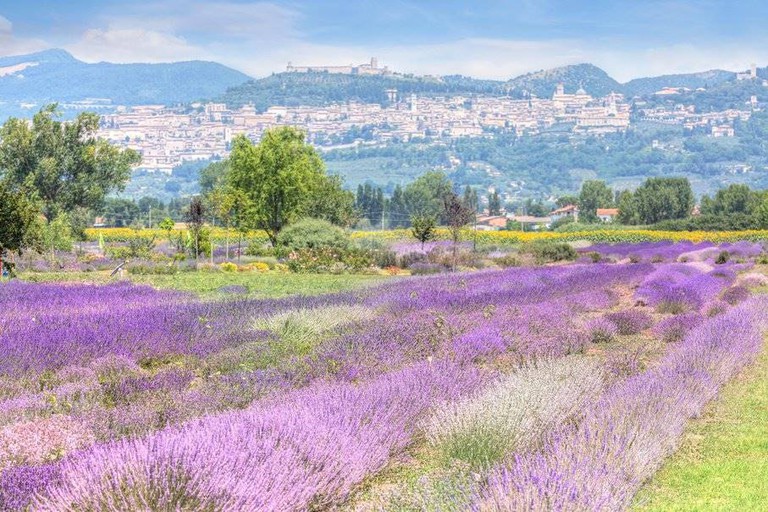 © Joana Kruse / Alamy
Breathe in the calming aromas of the lavender fields of Assisi, home to more than 60 species of lavender. Here you can buy all manner of plants as well as special lavender oil, which promises to help you get a restful night’s sleep. Guided tours of the fields are available and, in June and July, the nursery plays host to the local lavender festival. 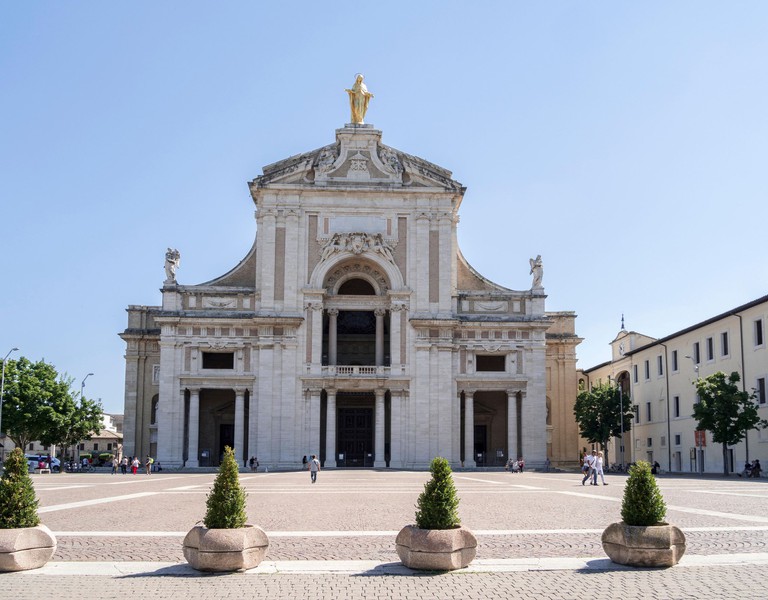 © Biblio Photography / Alamy
This Basilica is where St Francis renounced the world to live alongside the poor, thereby starting the Franciscan movement. The Chiesetta of Porziuncola is the little church he was given by the Benedictine monks and it was his favourite place until his death in 1226. Don’t miss the rose garden where – legend has it – St Francis rolled around naked to punish his body for its sins, but the rose thorns miraculously disappeared as they touched his body.

If it’s delicious local delicacies you’re after, then Terra Umbra Antica has it covered – from Umbrian wines and olive oils to tangy pecorino cheese or a sumptuous cured-meat platter. The prosciutto makes the ideal filling for one of the small food store’s generously stuffed sandwiches and there’s even a little tasting table where you can sample their specialities. Don’t miss the baci di Assisi (almond kisses) – to die for. 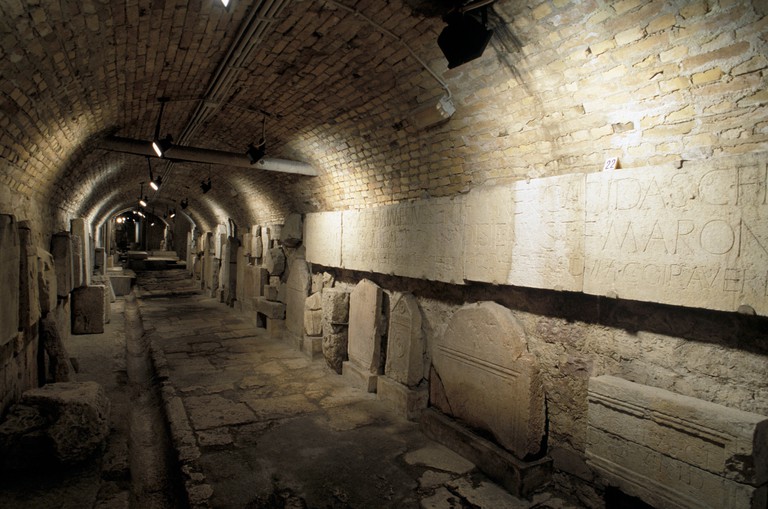 © REDA &CO srl / Alamy
Deep beneath the Piazza del Commune are the remains of Assisi’s ancient Roman forum; once the hub of the town’s religious and political life. Discovered during archaeological digs in the 19th century, venture down 4m (13ft) past the Romanesque crypt to get a closer look at the fascinating ruins. Among the highlights are the magistrates’ podium whilst the archaeological museum is home to multimedia displays that help bring the past back to life. 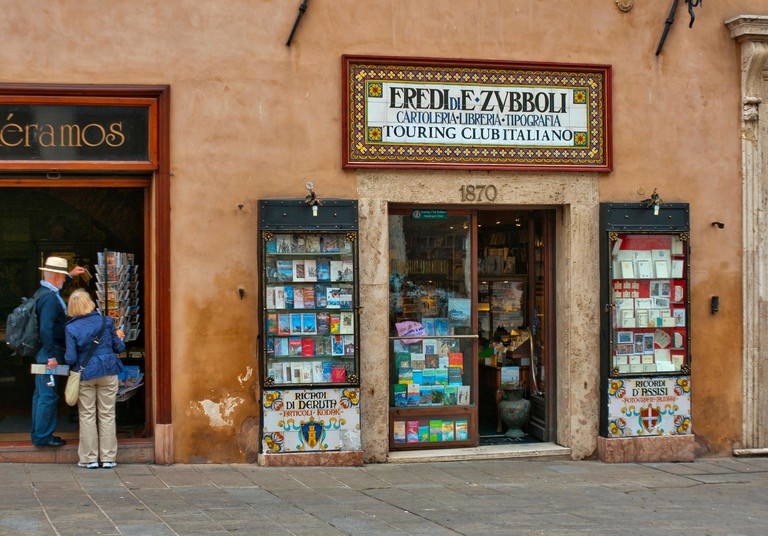 © Hemis / Alamy
For unique souvenirs, head to the Libreria Tipografia Zubboli, where you can buy artisan stationery, all crafted using traditional methods. The company has been making these items since 1870. There’s a huge array of products to choose from including personalised writing paper and leather-bound notebooks. Bookworms will be blown away by the library, which is stuffed full of specially bound novels, historical literature, books about art and even Italian classics such as Pinocchio.

Admire the view from the Rocca Maggiore 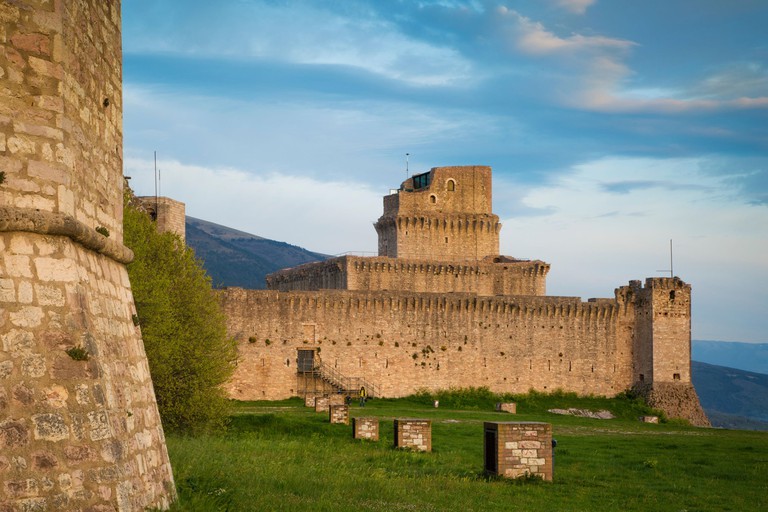 © Brian Jannsen / Alamy
Standing proudly on top of a hill, the Rocca Maggiore gives the perfect bird’s eye view of Assisi. Built in 1174 to defend the town, the fortress was destroyed in 1198 after a riot to prevent it from falling into the hands of a papal governor. However, it was rebuilt in 1365 and is now a popular spot for tourists. Visit the Maschio tower for the best spot to take a photo of the Umbrian valley between Perugia and Foligno.

Tuck into craft beer and burgers at Umami Beer

Once you’ve soaked up Assisi’s history and culture, be sure to take the time to enjoy its other pleasures. Umami Beer’s owner and beer sommelier Roberto will help you navigate your way through the modern restaurant’s huge choice of Italian and international craft beer, while the mountainous burgers, made from prime cuts of local meat (or veggie alternatives) and homemade buns, will definitely leave you feeling happily stuffed.

Discover where you can stay in Umbria, or pick one of the best hotels in Perugia, now bookable via Culture Trip. You’ll want to try Perugia’s restaurants, or head to Florence where there are a host of attractions you won’t want to miss.