Between Florence and Rome, in the hills of Tuscany steam rises from bubbling natural pools and terraces

Volcanic activity can create wonders in unlikely spots. Between Florence and Rome, in the hills of Tuscany, you’ll find market towns, farmland and rocky outcrops – and, in the middle of it all, steam rising from bubbling natural pools and terraces.

Visitors here can splash around in the warm, bright-blue water, relax on the rocky steps and get pampered in nearby spas. 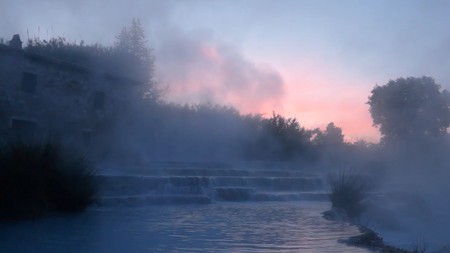 The waters of the gods

This is the Cascate del Mulino, part of a larger group of springs called the Terme di Saturnia. The springs have been running for over 3,000 years, trickling through the earth from nearby Mount Amiata. Legend has it that the gods Saturn and Zeus were battling when a stray lightning bolt landed here, splitting the earth, causing hot water to bubble up and – according to some versions of the myth – sparking a Golden Age for humanity.

The waters at the Cascate del Mulino (waterfalls of the mill) are heated to around 37.5C (100F), and you may feel pretty utopian as you float in the milky pools, which are rich in minerals and thermal plankton. The water cascades over natural rock steps, leaving the neighbouring farmland and stone cottage shrouded in steam.

The water is said to soothe the skin and aid respiratory and circulatory health. It also smells strongly of sulphur, which some people find off-putting. While you’re far from city life, the surroundings aren’t perfect – there can be litter, and construction work nearby is ongoing. But this bubbling corner of Tuscany offers a warming – and free – spa experience in the Italian countryside.

It’s justifiably popular, and it can get busy, especially on weekends: head here early. The warmth and changing light are especially appealing at sunrise, and the colder months can actually be a great time to visit, as the water keeps you warm in the chilly air – just bring a woolly hat to warm yourself up afterward. By contrast, during the day in summer, the heat makes the pools less appealing and gives you all the more reason to arrive early.

How to see the Cascate del Mulino

The hot spring is around a two-hour drive north of Rome, and three hours south of Florence. There’s no entry fee, but there are toilets, showers and a café – though many people take their own picnics. It’s worth bringing flip-flops as the rocks can be slippery.

Thefts from cars are sometimes reported – keep valuables hidden. Buses run from the town of Manciano, and trains go as far as Orbetello, which is connected to Manciano by bus.

As well as the pools themselves, there are several spas in the area, including the Terme di Saturnia resort. Here there are large natural pools (big enough to swim in, unlike the cosy pools at the Cascate del Mulino), plus a wide range of beauty and health treatments, a hotel and a championship golf course.

The surrounding area has plenty to offer. The easily carved local tufa rock has been crucial to the region’s history, and there are cave dwellings, rock corridors (called vie cave) and ancient tomb complexes to explore – including the Necropoli di Sovana, which dates back to the Etruscans and features a carving of a winged sea demon. Towns such as Pitigliano and Sorana are good bases, set among the rocky ridges and dramatic scenery that defines the province, and there are good B&Bs and agrotourism in rural areas.

Further afield, the rest of Tuscanny is yours for the taking, with other thermal resorts, historic towns and beaches among the attractions of one of Italy’s most compelling regions.