The Coolest Neighbourhoods in Florence, Italy 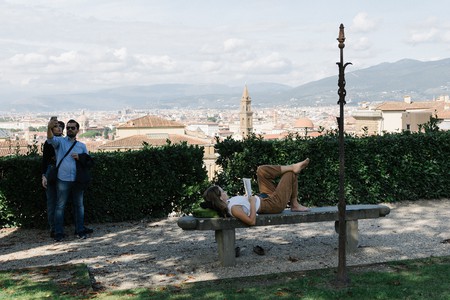 From its village-like outer districts to gentrified hipster haunts, discover the coolest neighbourhoods in Florence. 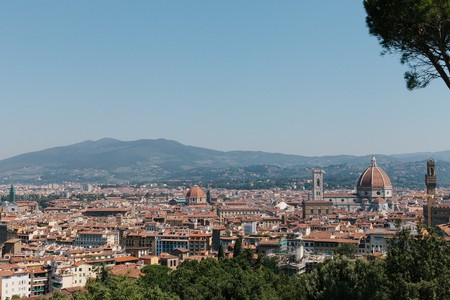 Florence might be small in terms of permanent population, but it punches well above its weight when it comes to historic cultural sites.

It’s not just about the landmark-studded districts of the city centre either – beyond those tourist hotspots, there are outlying areas packed with interesting places to eat and drink, independent shops and artsy cafés to explore. Here, Nardia Plumridge, author of Lost in Florence, talks us through her favourite neighbourhood hangouts in the Tuscan capital.

Sant’Ambrogio, located east of the city’s famous Duomo, is one of the few central neighbourhoods in Florence to retain a village-like charm. Daily life buzzes around its fresh food market in Piazza Lorenzo Ghiberti. Open from 7am, the market’s outside stalls have colourful, seasonal fruits and vegetables stacked on trestle tables, while inside the wrought-iron market building an incredible variety of meats and cheeses are displayed under gleaming glass counters. 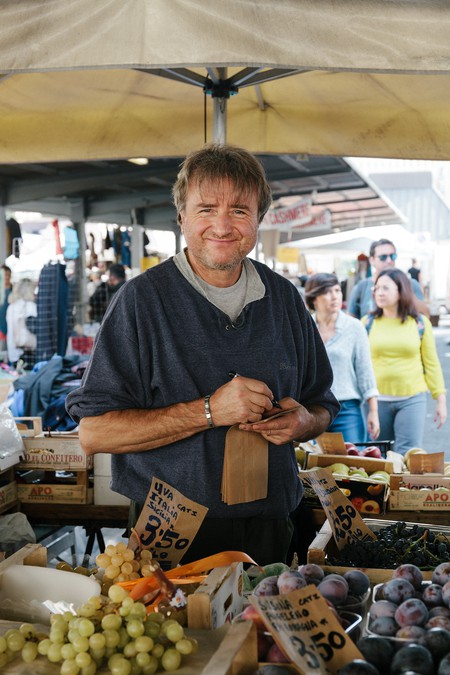 On Sant’Ambrogio’s cobbled lanes, locals spill outside cafés, sitting al fresco for morning coffees, perhaps on the terrace at Cibrèo Caffè, or a few blocks north on the leafy Piazza Massimo D’Azeglio. Come midday, La Cucina di Pescepane on Via Giosuè Carducci is an excellent stop for a light fish lunch, before dropping into Société Anonyme to browse the latest European fashions. At dusk, rum aficionados should head to Café 19.26, or for live music and film screenings, swing by former jail Le Murate, which has been transformed into a café and nightlife hub. 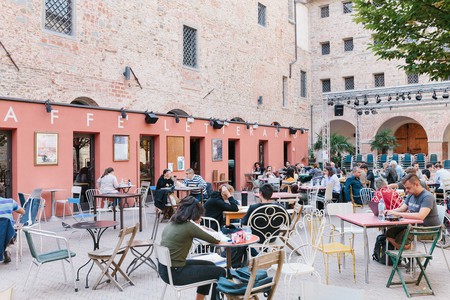 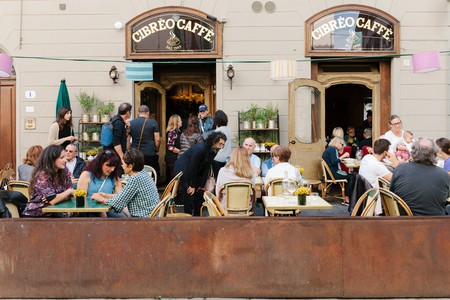 Once a run-down district, the past few years have seen the San Lorenzo area, around Florence’s train station, undergo a serious upgrade. Via de’ Ginori houses many of the newest hipster haunts in the neighbourhood, like café/homestore/florist La Ménagère that is always heaving from morning until night. 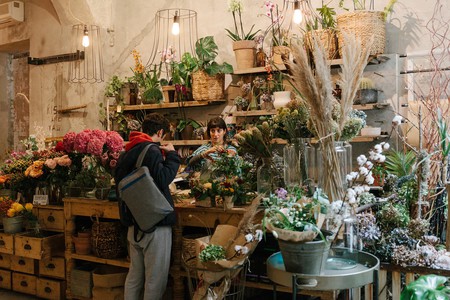 San Lorenzo is a great neighbourhood for food and drink. A few doors down from La Ménagère, at biodynamic venture SimBIOsi, diners tuck into fresh pasta, pizza and panini, while My Sugar, with its handmade gelato lovingly made on-site by a young husband and wife team, is a local favourite.

A block away, San Lorenzo’s food market, which dates back to 1874, now boasts a slick food court on its upper deck serving quality cheap eats until midnight. Pizza lovers can grab a table at Da Michele, the sister restaurant to the original Naples branch made famous in Eat, Pray, Love, which now boasts a stand-alone eatery. 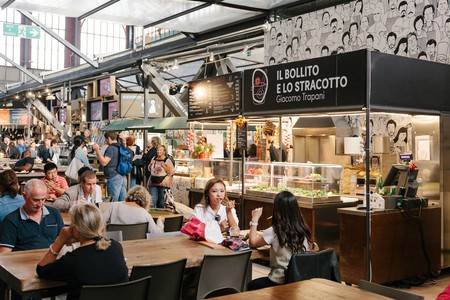 Outside Florence’s old city walls but worth the walk from the city centre, the neighbouring northern districts of Le Cure and Campo di Marte are quiet residential areas.

For a great, authentic Florentine experience away from the main sites, peruse Le Cure’s flea market on Piazza delle Cure (daily from 7am) then grab a sweet treat from Gelateria Cavini. For the artsy, the Mud Pottery Club on Via Faentina, where you can unleash your inner Michelangelo with clay, is well worth a go.

Down the road heading east, the 19th-century quartiere of Campo di Marte may lack the Renaissance charm of inner Florence, but its sports and entertainment options more than make up for it. You can swim in the local piscina (pool), stroll the leafy paths along Viale Malta, or catch a show at the Nelson Mandela Forum. Football fanatics can flock to Artemio Franchi Stadium to watch local team, ACF Fiorentina, in action.

If you’re planning on dining in the area, book a table at Ristorante Pizzeria Stadio for local cuisine, or for an ice cream, pop by Gelateria Pasticceria Badiani, which has been open since 1979 (try their Buontalenti ice cream flavour). Come sunset, luxury hotel Il Salviatino, a former private villa dating back to the 15th century, serves its cocktails with a spectacular view.

The southern side of Florence is renowned for its bohemian feel and artisan workshops. Santo Spirito is a particularly popular neighbourhood in the area, centred on a leafy piazza lined with eateries perfect for an al fresco lunch or a sunset aperitivo. Pop into Basilico di Santo Spirito, the neighbourhood’s namesake church, whose simplistic facade is something of a visual trick. Within its walls you’ll find mesmerising, ornate Baroque styling. Be sure to seek out the church’s “secret” side room, which has a Michelangelo crucifix on display. 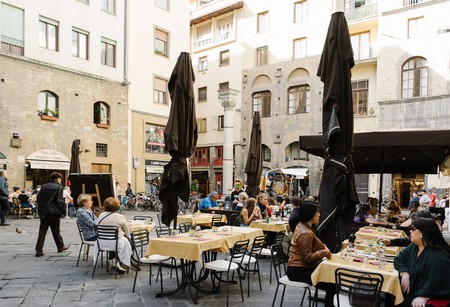 For shopping in this neighbourhood, head to Via Santo Spirito for fashion at Santo Spirito 9, jewellery at Angela Caputi and handmade gladiator sandals at Francesco. Further south, along Via Romana you’ll find homewares, food shops and the gates to the green oasis of Boboli Gardens. 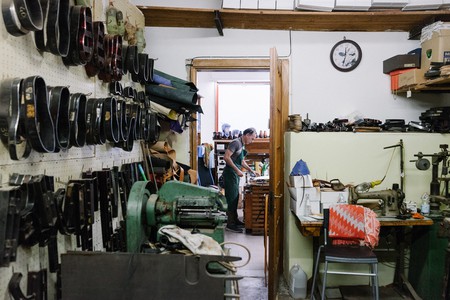 A minute and quaint part of the city’s Oltrarno district (south of the river Arno), San Niccolò is buzzing with new ventures, especially along Via San Niccolò. These make it a brilliant neighbourhood for shopping, and recent new openings include scent shop Sileno Cheloni and the perfume museum of Lorenzo Villoresi. Be sure to stop by jewellery maestro Alessandro Dari’s museum-like showroom, before checking out the modern street art within the creative space of Clet Abraham. 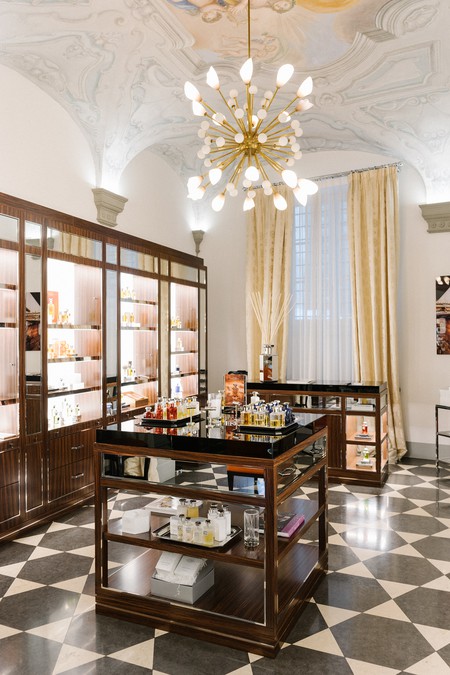 Luxurious linens are on display in the 11th-century church showroom of Busatti, a Tuscan brand that has been making refined homewares since 1842, while further along Via San Niccolò the terrace at The Speakeasy is ideal for a Spritz under the shadow of nearby medieval tower, Porta San Niccolò. 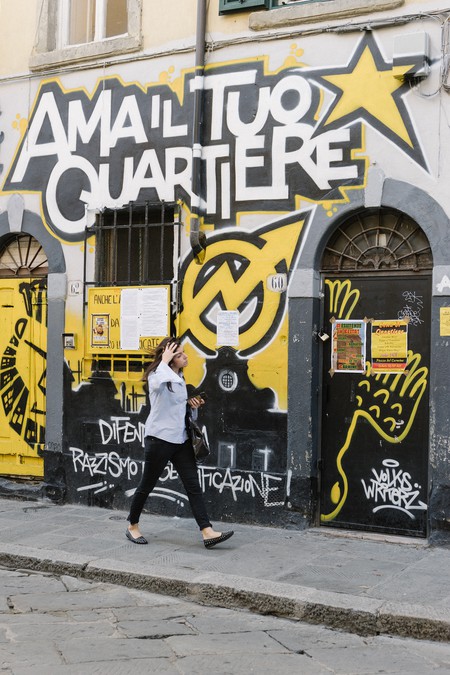 The sculpture on display at Galleria Romanelli, which is one of the oldest studios of its kind, takes you back to a bygone era of Florence, as does the fresco splendour within the Brancacci Chapel in the church of Santa Maria in Piazza Carmine. For a greener escape, the small but quaint Piazza Tasso is complete with basketball courts and benches ideal for sitting and enjoying a gelato, perhaps from La Sorbettiera at number 11r. 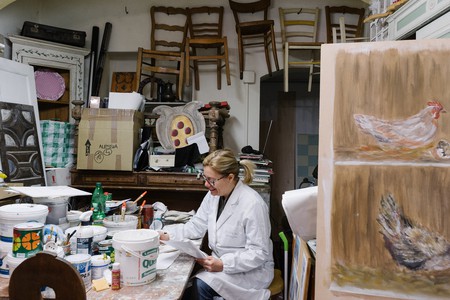 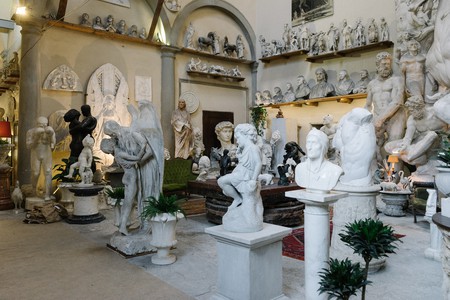 Not officially in Florence, but still considered by many as part of the city, the hilltop enclave of Fiesole boasts Roman roots and is a worthwhile escape from the hustle of the inner city. It’s worth coming for the morning market in the Piazza Mino, where antiques are on sale the first Sunday of every month, before hiking the cobbled lane towards the monastery of San Francesco to look down over Florence from the heavens.

Lunch has to be on the sunny terrace at La Reggia degli Etruschi, which serves classic Florentine dishes with a modern twist. Eatery Coquinarius boasts a garden for sunset cocktails, as does 15th-century Villa San Michele, now a luxury hotel. In summer, classical and progressive jazz concerts are held in the remains of the old Roman theatre for Estate Fiesolana. 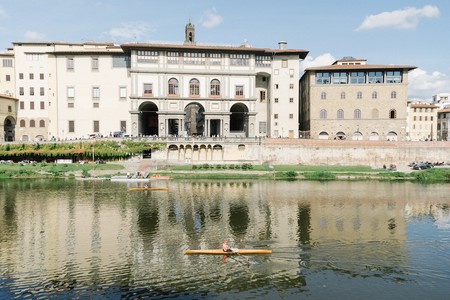 This is an updated version of an article originally created by Nikki Crowell.