The Best Things to Do in Cortona, Italy 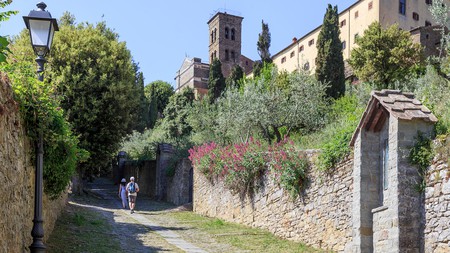 This hilltop town tucked in the Tuscan province of Arezzo is an artistic centre in the Chiana Valley – which shows in its villas, museums, top-tier restaurants and ceramics shops.

The Medieval, walled town of Cortona perches prettily on a hilltop, with uninterrupted views over the manicured farmland of the Val de Chiana (Chiana Valley). Its handy location makes it a good base from which to explore both Tuscany and Umbria, with regular trains into Florence taking an hour and a half. The steep, narrow streets can be tricky to navigate, but the views of Lake Trasimeno from Piazza Garibaldi (or Piazza Carbonaia, as it’s known to the locals) are worth the effort. It is known to many as the cultural and artistic heart of the Arezzo region, so you’ll find plenty to feast your eyes on here, as well as your belly. Here are the best things to do in Cortona, Italy.

This museum of religious art is small but perfectly formed, with nine rooms displaying masterpieces from the second century BCE to the modern day. The museum’s collection was brought together after World War II, creating a significant and unique body of work. Highlights include one of the most famous works of the early Renaissance, Fra Angelico’s fresco of The Annunciation. The artist’s careful use of light and spatial depth signifies the transition from Medieval art to the Renaissance. Don’t miss it. 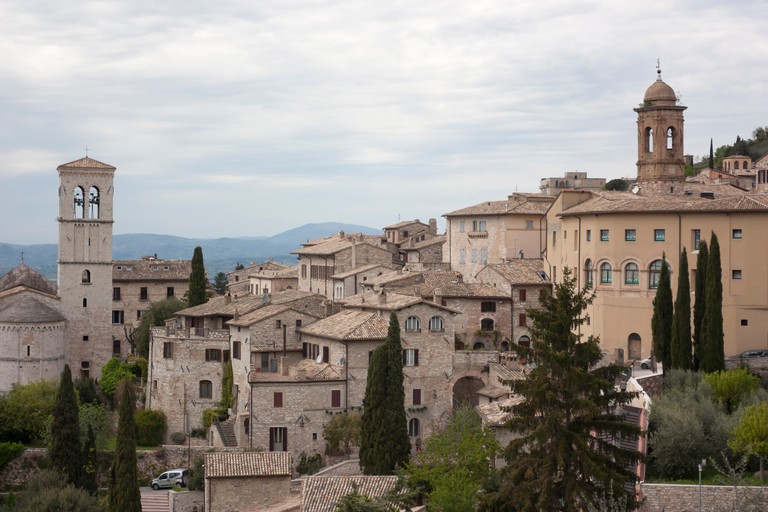 This impressive stone monastery lies at the foot of Mount Sant’Egidio, where St Francis of Assisi, one of Christianity’s most venerated religious figures, came to pray and preach in 1211. Assisi and his followers frequently stayed in this tranquil spot while doing their religious work around the area, although the building work didn’t begin until after his death. Come to experience the meditative magic of this isolated place, where the gentle sounds of the waterfall blend harmoniously with ecstatic birdsong. It’s not hard to see why the patron saint of animals and ecology chose to rest his head here.

Dream of romance at Villa Bramasole 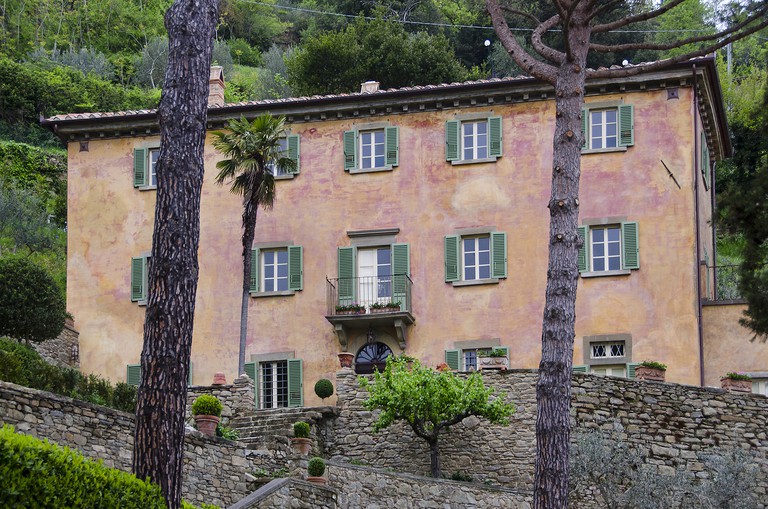 Bramasole, the house made famous for its renovation in the book and movie, "Under the Tuscan Sun," by Frances Mayes, sits on the side of the hill outside of Cortona, Italy, with very steep gardens and lots of stone walls to hold up the terraces. | © chapin31 / Getty Images

Set amid olive groves, vineyards and sunflowers, Villa Bramasole is the archetypal Tuscan villa. It was brought to the public’s attention thanks to Frances Mayer’s book and ensuing film Under the Tuscan Sun. The story tells of an American divorcee, Diane Lane, buying and restoring an abandoned rural Tuscan villa after learning of her husband’s affair. Her new life in Tuscany is filled with colourful characters and – spoiler alert – the promise of a new romance.

This family-run wine estate has been producing baracchi grapes since 1860, but Riccardo Baracchi and his son Benedetto replanted and revived the property in 1997. Now, the father and son offer the very best of sangiovese, syrah, merlot, cabernet sauvignon and trebbiano wines from their hillside idyll. Book a room, and sleep among the vineyards at the 17th-century Tuscan villa, Il Falconiere, for peaceful nights and beautiful views across the surrounding valley from the rose-scented terrace. 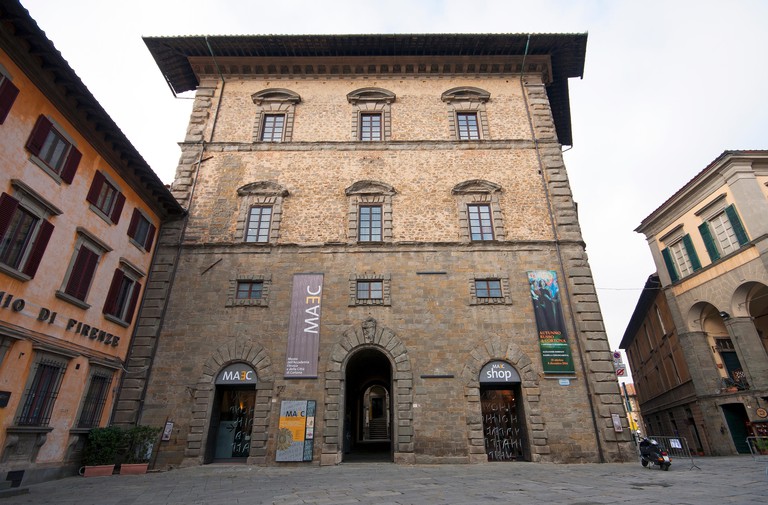 The Academy lies within the historical Palazzo Casali, which also houses the Etruscan and Roman Museum of Cortana, known locally as MAEC. Set aside a few hours to discover some of the most exquisite works created by the Etruscan civilization. The Academy itself is located on the upper floors of the building, tracing the beginnings of this ancient people and includes an exhibit of a funeral boat dating back to 2000BCE. For an authoritative look into the region’s origins, this is one you shouldn’t miss. 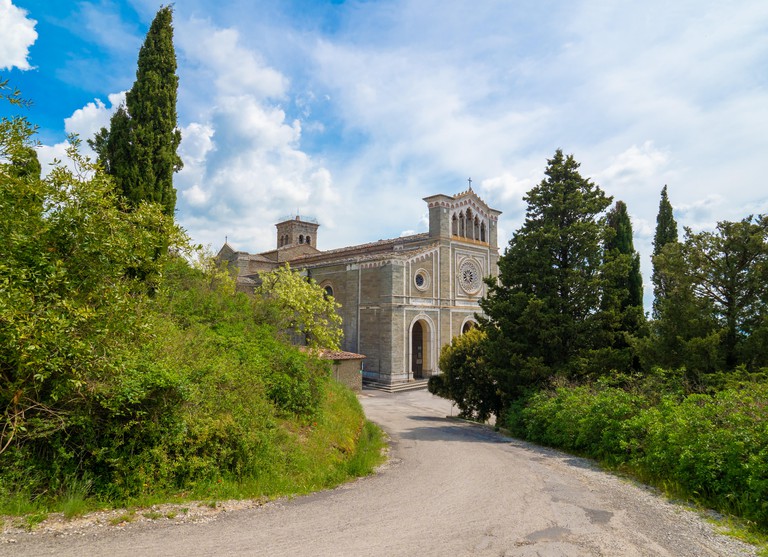 This neo-gothic basilica is dedicated to Saint Margaret of Cortona, a Roman Catholic saint native to Cortona who was known by her fellow friars as “the Franciscan Mary Magdalene”. She had a colourful history, transforming herself from sinner to saint in her own lifetime – and is now the patron saint of prostitutes as well as the homeless, orphaned and mentally ill. Only the rose window and bell tower are part of the church’s original architecture, but Margaret’s body still lies inside. The basilica offers sweeping views over the neatly cultivated Chiana Valley.

Pretend to be a knight at Castello di Montecchio Vesponi 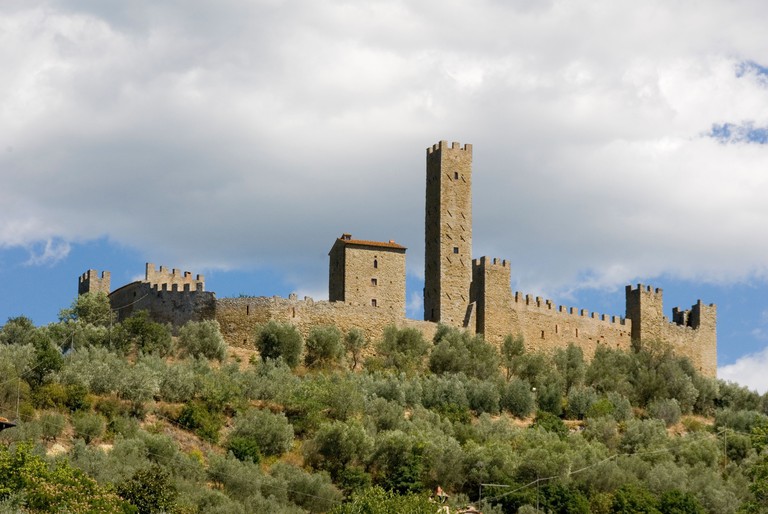 At 364m (1,194ft) above sea level, the Castle of Montecchio Vesponi dominates the Chiana Valley with its defensive battlements and lofty tower. This Medieval fortress, in a crenellated ring topping a hill carpeted with olive trees, is considered to be one of the best examples of its kind in the whole of Tuscany. Although, now, it’s a private residence, you can still get a crack at pretending to be a knight of yore, on a private tour made by appointment only.

If people-watching were a sport, then Bar Caffe Signorelli would be an Olympic arena. As it’s perpetually busy, you might have to fight for the attention of the harried waiters, but it’s all part of Signorelli’s charm. Choose a pastry from the overstuffed glass counter, order a frothy cappuccino, and watch the hustle and bustle of everyday Cortona life pass by.

Restaurant, Italian, Mediterranean, Vegetarian, $$$
Facebook
Email
Twitter
Pinterest
Copy link
Share
Robert Redford and Ralph Fiennes are just two of the famous faces you’ll find on the walls of the Osteria del Teatro, with handwritten thank-you notes to Emiliano Rossi, the restaurant’s Michelin-starred chef. Rossi brings Renaissance recipes to life with a light, deft touch, creating modern masterpieces for the locals and luminaries who rub shoulders in his cosy, traditional trattoria. Even the pasta here is second-to-none – especially the one that comes smothered in truffles and porcini mushrooms.

Get a unique souvenir at Terrabruga Ceramics

Giulio Lucarini is one of the master potters at Terrabruga Ceramics, which specialises in the rustic yellow and green ceramics that the studio is famous for. Get behind the potter’s wheel to be taught how to create your own Tuscan masterpiece, or just watch the experts at work. And be sure to bring a piece of Tuscan craftsmanship back home with you.

You’ll need to rest your head after a day in the Tuscan sun, so take a look at the best hotels to book in Cortona with Culture Trip, and pay the top restaurants in the area a visit.