How to Spend Three Days in Milan 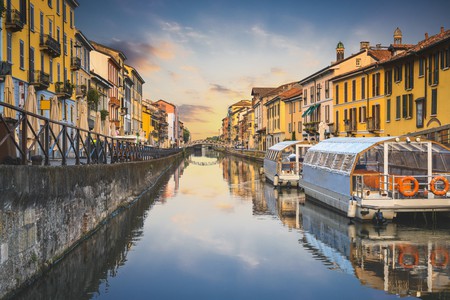 Milan is often a convenient layover between other destinations in Italy, but if you have limited time in this city and don’t know where to look, you could seriously miss out on some beautiful and unique experiences. With the gorgeous canals of Navigli, the majestic Duomo, numerous renaissance paintings, old and new architectural highlights, aperitivo and food specialties to consider, you can capture the highlights of Milan in just three days.

Breakfast is mandatory at Pasticceria Giacomo for its signature “bomba di Giacomo”, a puff pastry filled with mascarpone cream and wild strawberries. Then the day starts with a visit to the Duomo Cathedral. The stunning Gothic cathedral is a treasure of the city, and it contains over 3,000 statues, 700 figures, and 135 gargoyles. If you have time, it is highly recommended that you head to the rooftop to experience the breathtaking views across Milan.

Just a stone’s throw from the Duomo is the famous Galleria Vittorio Emanuele II, which is a shopping plaza, architectural masterpiece and colloquially known as the city’s living room. Conceived as a commercial street to connect Piazza Duomo to Piazza della Scala, the Galleria is full of high-end boutiques, like Prada, Gucci and Louis Vuitton, as well as historic cafés, like Caffè Biffi and Bar Camparino, where you can book a table for lunch. The Neoclassical building with an iron and glass roof and glass-roofed arcades was built by the famous architect Giuseppe Mengoni. Tradition says that rotating three times with your heel on the genitals of the painted bull, portrayed in the mosaic on the floor of the gallery’s octagon, brings good luck. The roof of the Galleria is open to visitors on weekends and by reservation only. Starting from Highline Galleria, you can stroll on the panoramic walkway for 250 metres (820 feet) along the roof, which the architect used to monitor the construction of the building. Today, the Highline Galleria sidewalk hosts a series of exhibitions, shows and installations, surrounded by the stunning view of the Duomo. 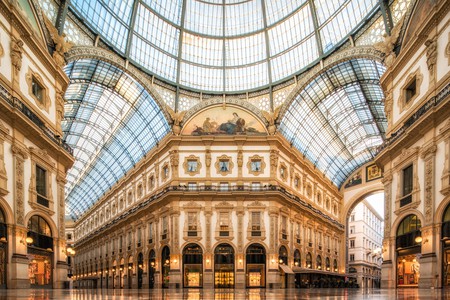 From the Galleria Vittorio Emanuele II, head to the artsy Brera District a couple of blocks away. The area is full of small art galleries and boutiques, and it houses the famous Pinacoteca di Brera. This prestigious art gallery (and academy on the upper floors) has been scaling the list of the most visited venues in Italy. Here, you can find a vibrant collection of masterpieces like Mantegna’s Lamentation Over the Dead Christ or The Supper at Emmaus by Caravaggio. After the visit, walk towards Castello Sforzesco (Sforzesco Castle), which will bring you back to the 15th century. The estate has a long history. First, it belonged to the Visconti family, then it became the home of the Sforzas, known as the rulers of the city. The latter, who were also known for their passion for art, hired several artists, like Donato Bramante and Leonardo da Vinci, to decorate it. Nowadays, the castle contains a few museums where visitors can see the famous Pietà Rondanini by Michelangelo. Next, a visit to the nearby Convent of Santa Maria delle Grazie is a must, as it houses Leonardo da Vinci’s masterpiece, The Last Supper. 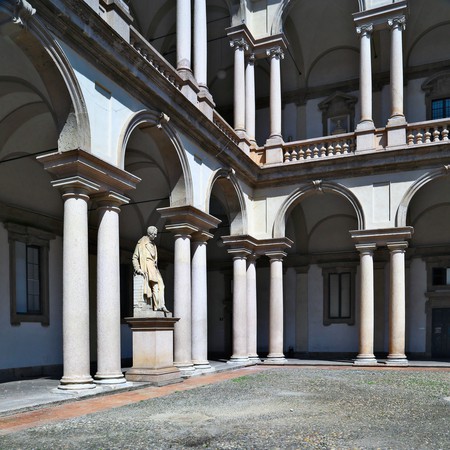 After having your own supper, put on your best attire because you should most definitely spend the whole evening at La Scala, the famous theatre with its Neoclassical interiors. Before seeing one of its legendary performances (like Tosca), stop in the museum that houses a collection of costumes, accessories and photos of historical shows. The Scala also offers some guided tours to explore the beauty of the theatre and the Ansaldo Workshop, where professional designers make the costumes and scenery for the performances. Another good way to enjoy the old theatre is to go to the free rehearsals of the Filarmonica della Scala, a series of concerts in preparation for the main show.

If you love architecture, start your day exploring the area around Porta Nuova, the ambitious urban redevelopment project that involves the Garibaldi, Isola and Varesine districts. Head to Piazza Gae Aulenti, where, among water basins, lighting installations and skyscrapers, you’ll find 23 golden “trumpets” designed by the artist Alberto Garutti. The installation is now one of the most visited pieces of public art in the city. The reason is obvious once you see it: the trumpet sculptures stretch to different levels of the underground shopping plaza beneath you, transporting the sounds of each area up to the surface, depending on which trumpet you listen to. The experience is even more spectacular if you take time to explore the bright Solar Tree, the beautiful solar LED lamp designed by Ross Lovegrove for Artemide, located in Piazza Cesar Pelli. 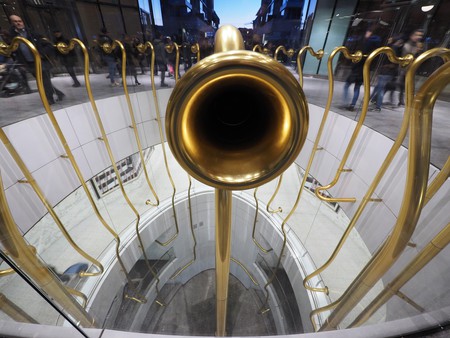 Relax with lunch at Osteria dei Vecchi Sapori, which serves traditional Milanese recipes. Then continue on to the Hines complex of Porta Nuova, comprised of numerous buildings. King of the area is the Unicredit tower, the tallest in Italy (230m/755ft), designed by Cesar Pelli and the Milan-based studio Piuarch. The futurist building hosts the Alexander McQueen showroom, the Porta Nuova info point and a Nike store. Located on the ground floor of the tower is the new Feltrinelli RED bookcase (Read, Eat, Dream), where you can quietly read a book while eating a piece of cake. This popular literature venue offers free concerts, aperitivo, foreign language lessons, book launches and readings. 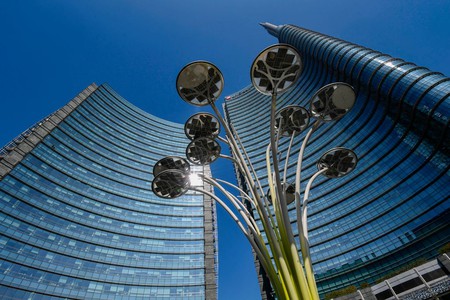 Nearby, the Porta Nuova district is home to two of the most famous Italian towers. First is the Vertical Forest by the notable architect Stefano Boeri. This is an innovative project that invites a new way of urban living that’s more sustainable and closer to nature. From here, head towards the Biblioteca degli Alberi (“Tree Library”), an impressive 95,000-square-metre project designed by the landscape architect Petra Blaisse (of the Inside Outside studio in Amsterdam) and built by Coima. The space is equipped with more than 450 trees and thousands of plants of over 100 different species. Additionally, there are areas dedicated to sports, running tracks, vegetable gardens, food kiosks and thematic flower beds. Not far from the Biblioteca degli Alberi is one of the quintessential Milan fashion landmarks: the glamourous 10 Corso Como. This lifestyle concept store was founded by Carla Sozzani, former fashion editor and publisher, and sister of the famous Vogue Italia former editor-in-chief, Franca Sozzani. The location itself seems to be designed like a magazine. You can find a fashion section, a food area with a refined café, a gallery displaying new talents and a bookstore. 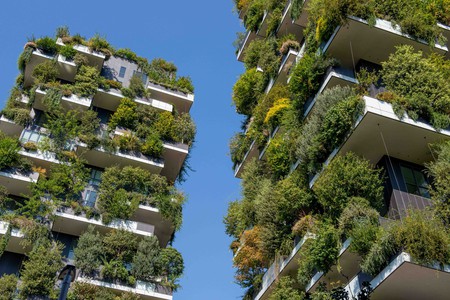 Late afternoon, around 6pm, start with an aperitivo at Radetzky Café. The bar, opened in 1988, embodies the essence of what once was called the “Milano da bere” (Milan is for drinking). This tradition, where your first drink is accompanied by free food, began in the ’80s and solidified Milan as the capital of aperitivo. If you want to do as the locals do, you should order either an Aperol Spritz or a Negroni Sbagliato, two of the signature drinks of the city. Food is always abundant and usually displayed on the counter. Grab your plate and fill it with focaccia, pasta, salad and all the stuzzichini available.

After eating to your fill, head to Il Piccolo Teatro, one of the most popular theatres in Milan founded by the great play director Giorgio Strehler, theatre entrepreneur and director Paolo Grassi and his wife Nina Vinchi Grassi. From 1999 to 2015, the theater was the home of one of the greatest artists and play directors of Italy, Luca Ronconi. Il Piccolo Teatro also hosts one of the most prestigious Italian theatre schools, Scuola Paolo Grassi. 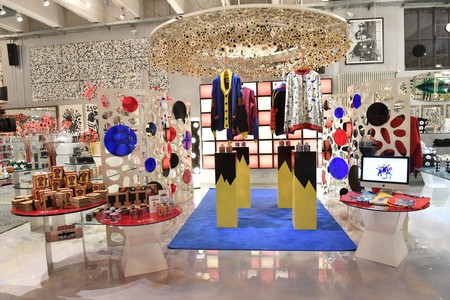 Start your day at Palazzo Reale, home to one of the biggest museums in the city. You need a ticket to see the exhibitions, but the courtyard of the Royal Palace is free to visit. From here, head to the Biblioteca Ambrosiana, which is famous for its huge collection of Leonardo da Vinci’s sketches and notes called the Codex Atlanticus. The library has more than forty volumes, so you can pretty much spend all morning here. But if you’re interested in moving on, go to Basilica di Sant’Ambrogio, the 12th-century basilica dedicated to Milan’s patron saint. 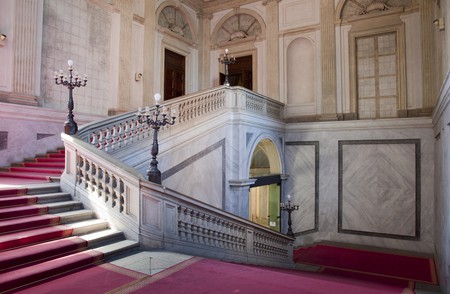 Lunch is served at Peck, a heaven for foodies. It’s a bit expensive, but the menu is worth it, full of authentic Italian recipes dressed with a contemporary touch. Just try the pappardelle cacio, pepe e pere (a pasta dish with pears), for example. The restaurant is also a marketplace where you can find products from all over Italy. Peck is close to via Torino, one of the most crowded streets in the city, full of boutiques and home decor stores. If you walk along via Torino, you’ll end up at the Basilica San Lorenzo Maggiore, which is defined by its Roman columns. This is a favourite hangout spot for many people at the piazza in front of the Basilica. 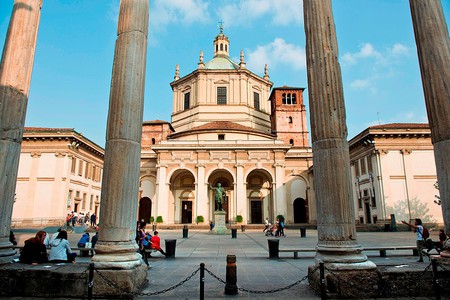