A Pocket Guide to Polignano a Mare, Italy 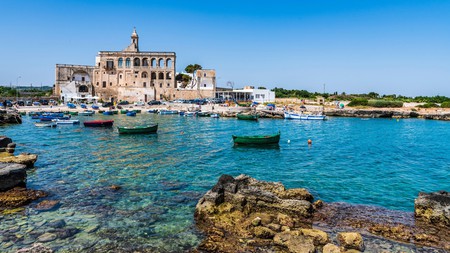 San Vito Abbey is part of the historical fabric of Polignano a Mare, one of the most beautiful towns in Italy | © Nicola Simeoni / Alamy

Iconic Italy can be found at Polignano a Mare, a historic coastal town in Puglia. Chill out at brilliant beaches, including picture-perfect Lama Monachile and family-friendly Porto Cavallo, explore your way through the scenic Itria Valley and visit the Old Town to see white house-lined alleys brought to life with colourful shutters and greenery. Visit beautiful churches, sip wine in sun-drenched squares and dine in romantic seaside caves with help from our handy Polignano a Mare travel guide.

Explore Polignano a Mare and so much more by booking a 10-day tour of Southern Italy now on Culture Trip.

Walk to the townside viewpoint of Terraza Santo Stefano to spot the iconic seascape of Polignano a Mare’s beach Lama Monachile, also known as Cala Porto. This small beach sits beneath limestone cliffs, topped with the town’s whitewashed buildings. Take in the view, then pass under the Lama Monachile Bridge to chill out on the pebbled beach and dip in the Adriatic. 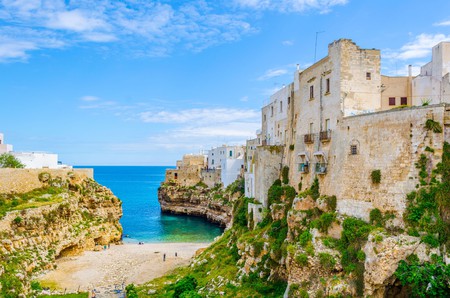 Things to do in Polignano a Mare

Get lost in the Centro Storico (Old Town) and you’ll still be sure to find Piazza Vittorio Emanuele II, the town’s atmospheric main square. Grab a table and sip rich Italian coffee as you admire the Palazzo dell’Orologio, or Clock Palace, that heads the square. While you wander the streets, look out for poetry written on the walls; you’ll see the musing by a local poet, known as Guido Il Flâneur, at the Vicolo della Poesia.

Book a ticket to Puglia’s only contemporary art museum, the Fondazione Museo Pino Pascali. Opened in 2010 in a former abattoir, this non-profit foundation exhibits work by renowned Apulian artists like Pino Pascali and boasts excellent seaside views. Afterwards, head to San Vito Abbey, 5km (3mi) from town, in a quaint fishing harbour. The abbey’s construction began in the 10th century and it retains a 17th-century staircase, Baroque features and a Romanesque-style church. Though you can’t go inside the abbey, grab a table at the nearby restaurant to sip wine while enjoying a view of the marvellous structure. Visiting mid-June? Don’t miss celebrations for San Vito, Polignano’s patron saint. 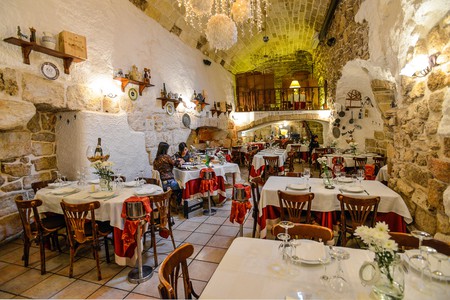 Of course, Polignano is blessed with fine Italian dining. Dine in an ancient cave at Grotta Palazzese that’s hosted banquets since the 1700s, or go al fresco on their spectacular seaside terrace. In the Old Town, Antiche Mura serves well-executed local dishes like veal scaloppini, while Specchia Sant’Oronzo is loved for stuffed pasta and views of the town. Round off the day at wine bar Al 9 Aperitivi, which pairs local pours with heaped meat and cheese boards, or enjoy a cocktail at trendy rooftop Aquamarea.

History of Polignano a Mare

Archeological research dates human presence in Polignano’s surrounding caves to the Paleolithic Age, settlements to the Neolithic Age and a village to the Bronze Age. Polignano as we know it originated, it’s thought, in the 4th-century BCE. Historians believe Dionisius II of Syracuse founded Polignano (then called Neapolis), and it became a base for the shipping trade across the Ionian to Greece. In Roman times, Emperor Trajan established the Via Traiana (built between 108-110 CE) connecting Benevento and Brindisi through Polignano. The Lama Monachile Bridge was part of this historic road. 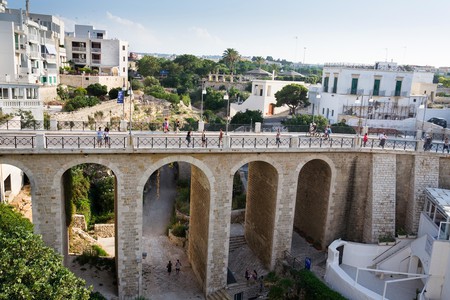