Rome’s most iconic fountain is a wonder to behold. Standing 26 meters tall, 49 meters wide and intricately decorated in the Baroque style, the Trevi Fountain is an unmissable sight in the city. Built on top of an ancient water source, it has recently gone through an intensive restoration and cleaning by the Fendi luxury fashion house. There’s no better time to visit the Trevi Fountain and learn about its history.

The Trevi Fountain is as curious as it is splendid. In spite of its grandeur, it lies sandwiched between small streets, where you barely hear the sound of rushing water before you round the corner and are greeted by this monumental structure. The fountain is located at the junction of three roads and more specifically it is built upon the ‘terminal point’ of the Acqua Vergine, one of Rome’s most important aqueducts that transports drinking water to the Eternal City. Acqua Vergine is the modern aqueduct that evolved from the Aqua Virgo, developed by Marcus Vipsanius Agrippa in 19 BC out of a desire to provide citizens with access to quality public services.

The Roman Empire had a unique and illustrious relationship with water, and Ancient Romans were skilled engineers who were able to orchestrate incredible feats for their time. With carefully devised aqueducts, water from surrounding hills flowed to the city thanks to the laws of gravity, and was subsequently stored in cisterns that created an energy vacuum, propelling the water to spray out of dedicated fountains. Rome is famous for its hundreds of nasoni, or ‘nose-shaped’ fountains with continuously running water, though these are relatively simple in design. The city’s elite often choose to demonstrate Rome’s cultural finesse through aesthetic means and the Trevi Fountain indeed follows this trend. 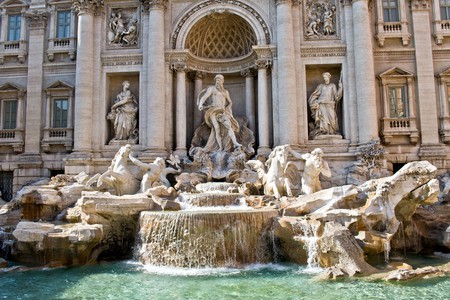 Though a fountain had existed at the location of the Trevi Fountain since ancient times, it wasn’t until 1629, Pope Urban VIII commissioned Gian Lorenzo Bernini to sketch renovations, that the fountain began to take its current shape. When the pope died, the project was abandoned, though some of Bernini’s suggestions were incorporated in designs a century later. In 1730 Pope Clement XII held a contest to re-design the fountain, and the Roman-born architect Nicola Salvi was ultimately awarded the project. Work began under Salvi’s direction in 1732 and was completed in 1762 by Giuseppe Pannini after Salvi’s death in 1751. 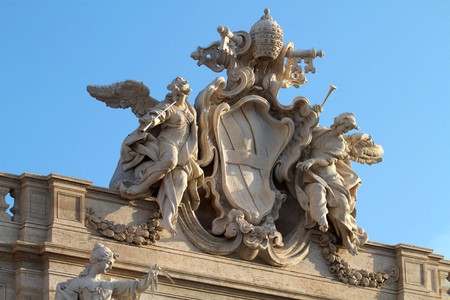 Intricately carved out of Travertine stone sourced from nearby Tivoli, the fountain depicts Oceanus, god of water, in the center niche, flanked by Abundance and Salubrity. Below the gods are a number of hippocampus and tritons adding symmetry to the fountain. At the top of the fountain sits the Papal Coat of Arms, suspended by angels.