Foods You Must Try in Florence, Italy 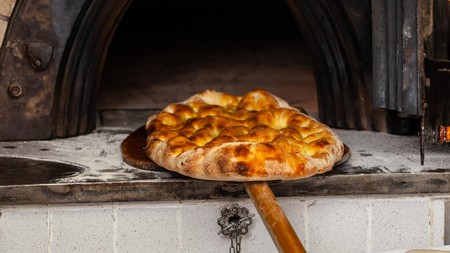 Italian cuisine is famous worldwide, but before you can understand the food, you first need to understand the history and geography of the country. Florence, in Tuscany, has a medieval history that influences the traditional staples of Florentine and Tuscan cuisine. Read our guide to the foods you must try on your trip to Florence.

You can enjoy a guided walking tour of Florence with Culture Trip by joining our immersive 10-day Northern Italy adventure, led by our local insider.

Of course, this list kicks off with Florence’s most famous dish, bistecca alla Fiorentina, or Florentine steak. It’s a large t-bone cut weighing anywhere from 1kg-4kg (2lb-8lb), fire-grilled, pink on the inside, seasoned with salt, pepper and a squeeze of lemon, and traditionally cooked over roasted chestnuts for a smoky flavour. Remember, do not ask the chef to cook the steak to your liking. You wouldn’t want to offend the chef or the Florentine tradition – Florentine steak is made one way. Be sure to share with a friend, because it is huge. Its price is per kilo, which is stated on the menu, and it’s customary for the server to bring the uncooked beef to the table before the chef cooks it, so you can both admire and approve your soon-to-be dinner. 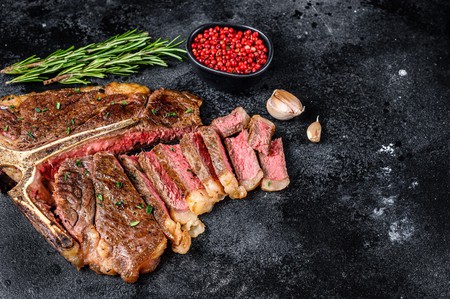 This is one of those common-folk dishes from Florence’s medieval period. Florentines seem to be divided when it comes to this street food dish; some love it, some hate it. It is a sandwich made with thinly sliced tripe that’s been boiled in broth, seasoned, and served either on a plate or in a sandwich. You can order it with spicy red sauce or herby green sauce, or even bagnato (with wet bread, and little bit of gravy) from outdoor markets or street vendors around the city. 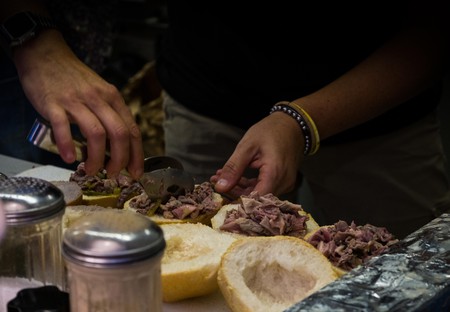 Papardelle is a long, wide, flat pasta usually paired with a heavy sauce, such as a ragu. Cinghiale is wild boar (traditionally wild, but now usually free-range from a farm), but the dish can also be made with wild hare, goose or rabbit. Wild boar is surprisingly delicious, with a rich flavour and texture that makes for a luxurious ragu. 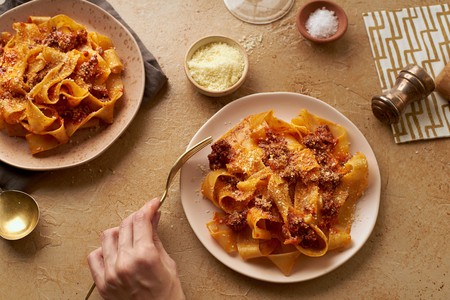 Pappardelle usually arrives with a heavy sauce, such as a ragu | © The Picture Pantry / Alamy

Florence has some of the best gelato in Italy. Avoid the sellers with bright mountains of artificially coloured gelato and over-the-top garnishes. Small batch is the way to go. Another little secret from a gelato connoisseur is if the colour of the pistachio flavour is anything brighter than a dull greenish brown, keep walking – it’s not good quality, handmade gelato. You deserve better. 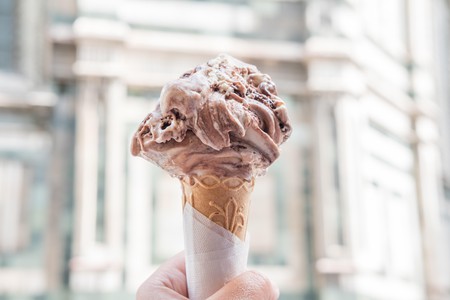 This dish can be found almost anywhere in Florence since it contains two delicious local ingredients, truffle and porcini mushrooms. Tagliatelle simply means cuts, since the pasta is thin, long and flatter than fettucine and can come is different sizes. The pasta is tossed in the mushroom sauce, with vegetables providing texture. The combination of these two mushrooms makes for a fantastically flavourful, yet simple dish. 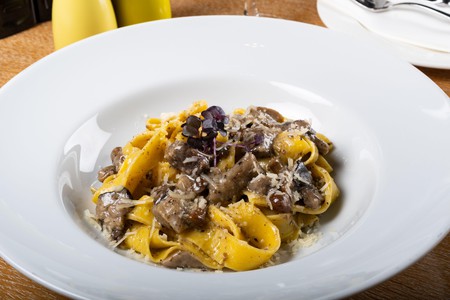 Tagliatelle from Florence is favoured for its use of local ingredients, including truffle and porcini mushrooms | © Cristina Alexe / Alamy

This is simply an appetiser with assorted types of bruschetta – small pieces of Tuscan bread topped with different sauces, purees or vegetable salsas. One of the most traditional antipasto toscano is a chicken liver paté on top of a crunchy Tuscan bread. Also order tagliere (a Tuscan meat and cheese board) to try a mix of everything. 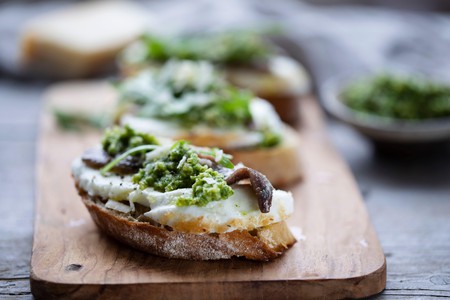 Crostini is an appetiser with assorted types of bruschetta

Literally translated as reheated, this traditional Tuscan dish is a soup made with stale bread, tomatoes, beans (usually cannellini) and any other in-season vegetables, along with herbs. Pappa al pomodoro is another dish using the same ingredients, but served mashed together, and cold, similar to the Spanish gazpacho but less liquid. What started as a dish of the people during the medieval period, using anything in the house, is now one of Florence’s most hearty comfort foods. 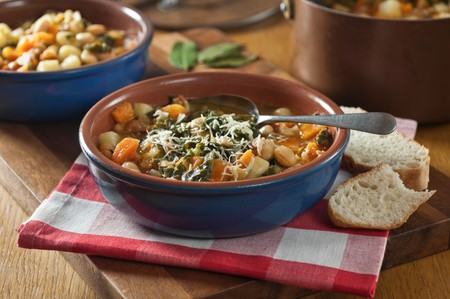 You may notice in Florence that the bread served at your table isn’t anything special and is a bit, well, bland. That’s normal. Florentine bread is bland and dense with a hard, crunchy crust. That’s because it’s traditionally made without salt. It is said that in the Medici period, there was a feud between Pisa, a large port city in Tuscany, and the Medici-owned area of Florence. Because of this feud, Pisa cut off the salt supply to any lands owned by the Medicis, forcing the common population to go without. They still use the salt-free recipe today, even with the access to salt. Italians love their traditions. 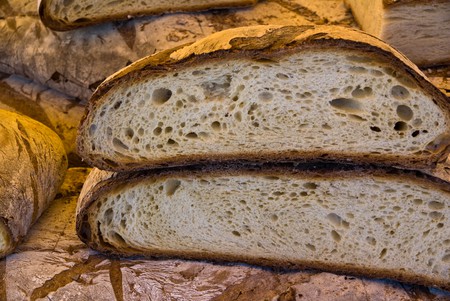 Florentine bread is known for being bland and dense with a hard, crunchy crust | © Wenetu / Alamy

Similar to what most people know as focaccia, schiacciata (meaning smashed) uses more salt and oil to give this thin, smashed bread its look and flavour. It’s used to make sandwiches, eaten alone before dinner or as a salty afternoon snack. It can be also topped with herbs, topped with olives or cheese, or even baked with grapes (a traditional dessert of the medieval period). 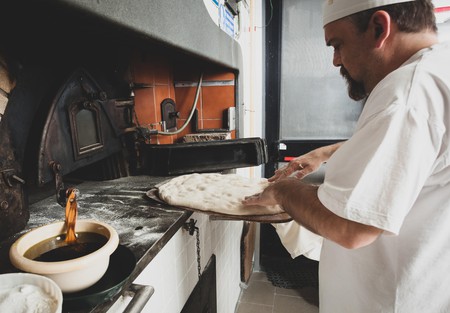 A typical Italian breakfast is a pastry, commonly a cornetto (Italian for croissant), eaten while standing at a bar before sipping a cappuccino. The Florentines love them stuffed with apricot jam (albicocca), blackberry jam (mora), wildberry jam (frutti di bosco), or with honey (miele), cream (crema), chocolate (cioccolato), and even Nutella. Almost every dessert you find in Florence will have this selection of flavours. Obviously coffee in Italy is a must. Order a normale (a single shot of espresso), a macchiato (shot of espresso with a dash of steamed milk) or a cappuccino (a single shot of espresso with milk). Italy uses milk steamed to a creamy perfection instead of foam. 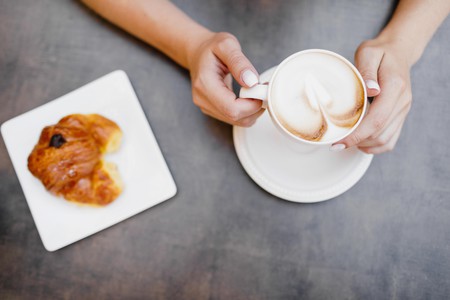 Pici is a traditional Tuscan hand-rolled pasta that’s dense and a bit chewy, which is why portions are small. Enjoy it with a sauce made with wild boar from Siena. 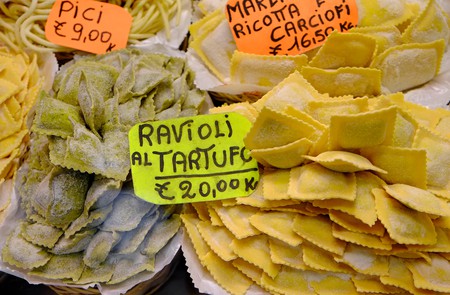 Pici is a dense, rather chewy pasta similar in shape to spaghetti | © David Burton / Alamy

Tagliere, a meat and cheese platter, is great as an appetiser, a light meal in the summer, or even just a snack to taste different meats and cheeses with a friend. Prosciutto, salami, and finnochiona (made with pieces of fennel for a different flavour and consistency than traditional salami) usually feature, plus different types of pecorino cheeses (sheep’s milk cheese). Bigger platters have grilled vegetables, slices of Tuscan bread, and sometimes a marmalade or honey. 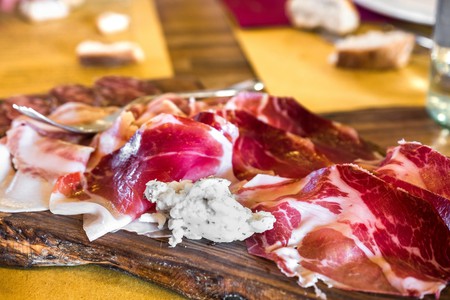 Although the name reminds you of the salty bread mentioned above, this is actually the name of a sweet Florentine cake. Rectangular in shape, this soft, spongy yellow sweet is made in one flat layer, covered in powdered sugar, and easily identified by the large fleur-de-lys stencilled in cocoa powder on top. Traditionally eaten around the time of Carnivale, this cake can be found in just about every bakery in the city at any given time of year and has become a staple of Florentine desserts. 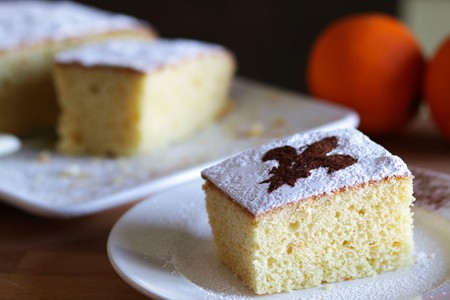 Speaking of classic desserts in Florence, cantucci are known all over the world as biscotti, but in Italian that is actually the generic word for cookies. These small almond cookies can be found anywhere and also have modern variations including with hazelnuts or pistachios in place of almonds. As a dessert, the classic recipe is served with thick amber dessert wine called vin santo. Dip the cookies in the wine to soften them, then enjoy. 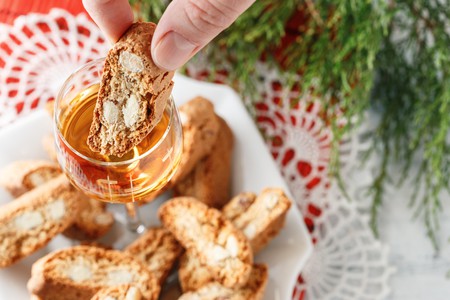