The English Market | © William Murphy/Flickr
Cork’s River Lee forks around the island that holds the city, with bridges breaking up the compact centre at unexpected junctures. The result is an urban area small enough to cross on foot but filled with meandering routes that defy a linear grid. Luckily, the majority of these must-sees could easily be checked off in just a few days, so rather than trying too hard to keep your bearings, let yourself get a little bit lost in the magic of Cork in between.

Cork’s answer to Dublin’s Kilmainham Gaol, this was the prison where the government kept Irish rebels during the Irish War of Independence and Civil War. One such inmate was none other than Constance Markievicz, the revolutionary nationalist who acted as second in command at St Stephen’s Green during the 1916 Easter Rising. Now a museum, the gaol is one of the city’s most unique points of interest. 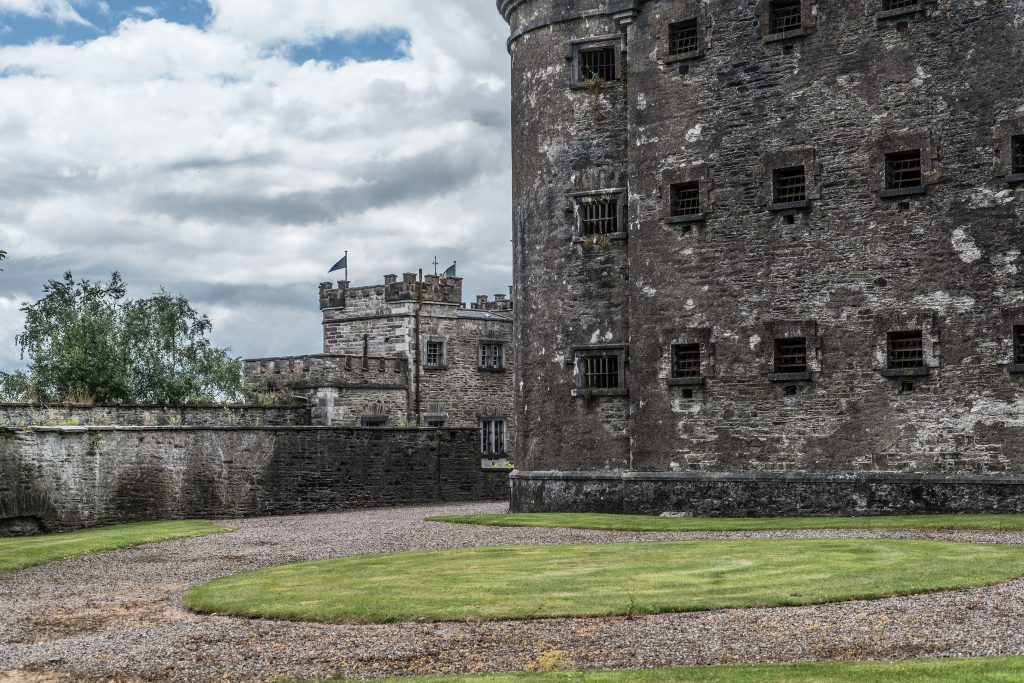 There’s no shortage of historical monuments in Cork City, but the Red Abbey goes way back to the 14th century. Given its name for the red-tinged sandstone used in its construction, the Abbey’s picturesque tower is the city’s only remaining structure from its medieval past. Like many of Cork’s must-sees, it’s tucked away in a residential area, but at only a five-minute walk from the city centre, it’s well worth the detour. 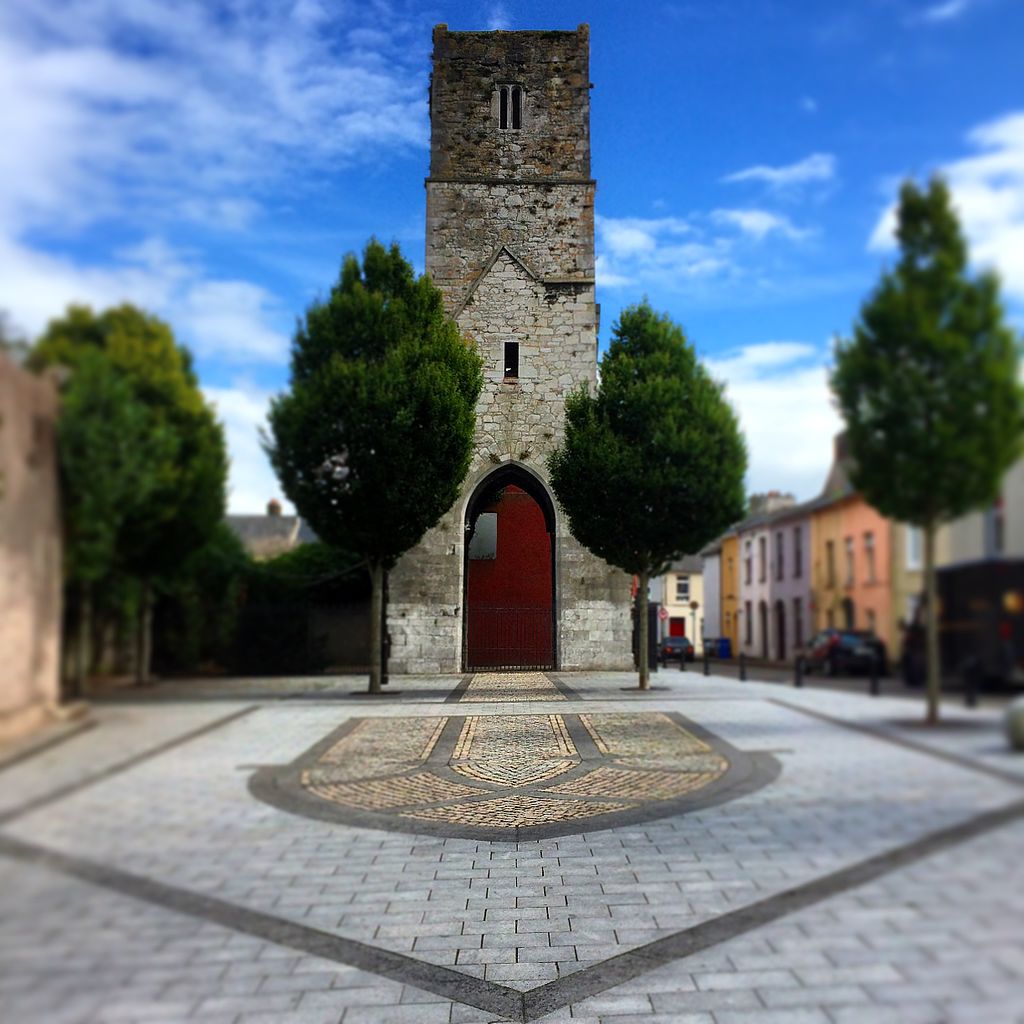 Art Gallery, Opera House
Map View
Wideoinstalacja Exhibition at the Crawford Gallery | © Anna Konik/WikiCommons
The Crawford Art Gallery, just beside the Opera House, houses a wide array of art from classical paintings to video installations, presented in beautiful surroundings. Fresh visiting exhibits rotate frequently, and the permanent collection is anchored by a selection of Greek and Roman sculpture casts. The on-site café, surrounded by a selection of the gallery’s artworks, is an ideal spot for recharging with a light lunch or tea and cake on vintage china.
More Info
Open In Google Maps
Emmett Place, Centre, Cork, County Cork, Ireland
+353214805042
View menu
Visit website
Visit Facebook page
Send an Email
Give us feedback

Referred to as ‘the beating heart of theatre in Cork’, the Everyman is a sumptuously decorated Victorian theatre located in a listed building on MacCurtain Street. It attracts the best of theatre, comedy and music, but if you can’t get tickets, swing by the Palace Bar where the shows’ musicians and actors often drink alongside audience members. The Everyman is the main venue for the annual Guinness Cork Jazz Festival (held in October), so use the nearby Metropole Hotel as your base if you want to completely immerse yourself.

The Father Mathew Statue on Cork’s Patrick’s Street is a mainstay of the city’s landscape, evinced by public protests from residents following a proposal to move it a less prominent spot in 2000. Theobald Mathew, a well-known priest who practised in Cork, was at the forefront of the temperance movement (the establishment of abstinence societies) in Irish cities during the 1830s and 1840s – which claimed success for significant reductions in violent crimes. He was also heavily involved in efforts to mitigate the impact of the cholera epidemic in 1832 and the famine of 1845–1849 on the people of Cork City. 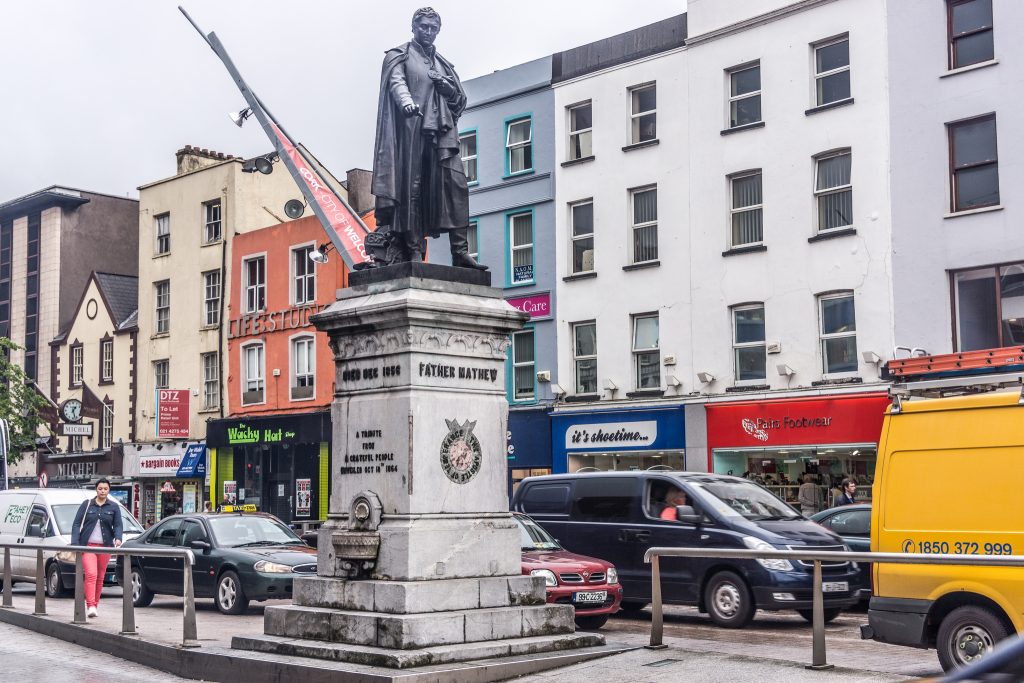 Harry Clarke’s stained glass transcended the literal religious depictions to the level of a fine art form. It’s worth a little wander out towards the university (UCC) to the south-west of the city centre to visit Honan Chapel, where Clarke installed a kaleidoscope of his most iconic work. There are also some incredibly intricate and surreal mosaics on display, including a stream of fish swimming up the aisle and star sign symbols nestled in Celtic weavings. 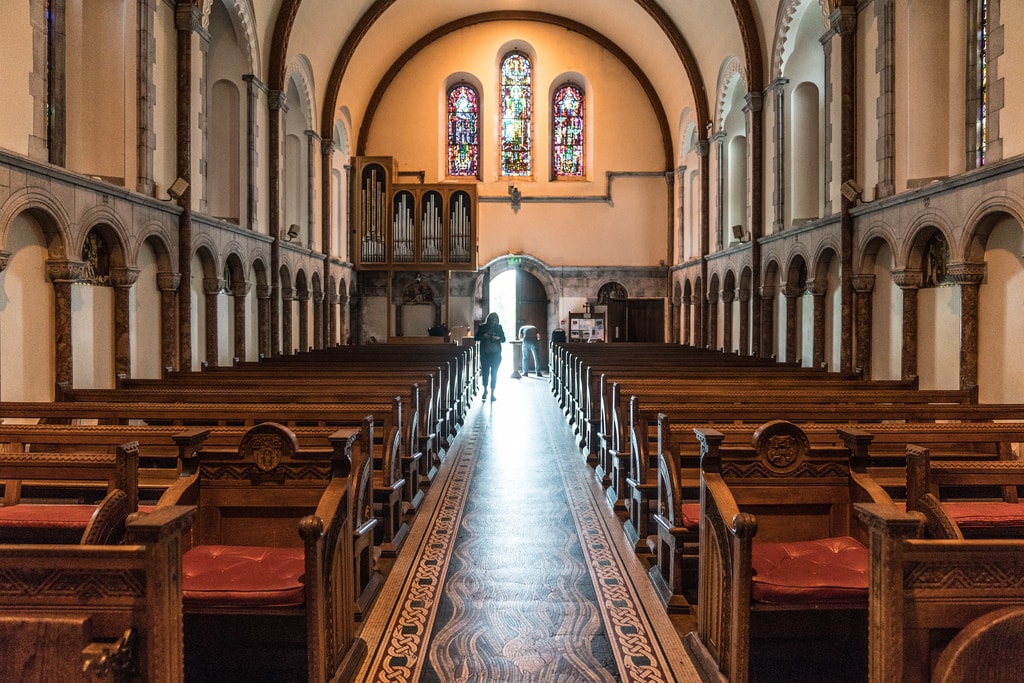 Church
Map View
Shandon Bells & Tower St Anne's Church, Cork
Those who are up for a bit of a climb would be hard-pressed to find a better way to get the lay of the land in Cork than a trip to St Anne’s Church, home of the Shandon Bells and tower. A walk up the slightly steep terraced streets of Shandon and a further 132 steps up the bell tower will reveal 360-degree views of the city and the memorable experience of ringing the bells. Reminders of the church’s history – dating back to 1772 – are everywhere, from the imposing and intricately detailed stained glass to the exposed internal workings of the still-working bells.
More Info
Open In Google Maps
Church Street, Shandon, Cork, County Cork, Ireland
+353214505906
View menu
Visit website
Visit Facebook page
Send an Email
Give us feedback

While you’re in Shandon, drop into Shandon Sweets, a small-scale sweet factory and shop run by the Linehan family for the past 89 years. A mural of lollipops and clove rock on the outside wall leave no doubt of what to expect inside, where visitors can watch the candy makers create traditional boiled sweets and drool over the myriad flavours they sell. Simply packaged bags of acid drops or butter nuggets make excellent little gifts (for others or yourself!).

Dan Linehan from Shandon Sweets I called up recently and Dan gave me a tour and a demonstration of sweet making. This place is an absolute treasure 🙂 I'd forgotten about the little Brus bags of broken sweets they sell #corkcity #likefood #corkfood #fblogger #irishfoodie #instafood #corkeats #cork #shandon

Surrounding Cork’s Public Museum, the urban oasis of Fitzgerald Park provides a riverside escape from shopping and sightseeing. A mere 10-minute walk from Cork’s centre but worlds away from city life, this is a perfect spot to take a picnic and watch the tips of mature trees skimming the Lee or venture across the ‘shaky bridge’. It also has an excellent playground and duck pond (plus the odd fairy door) offering fun for the entire family. If you find yourself in need of a stretch on a weekend morning, yoga classes take place at 10 am every Saturday throughout the summer, with proceeds going to the homeless charity The Simon Community. 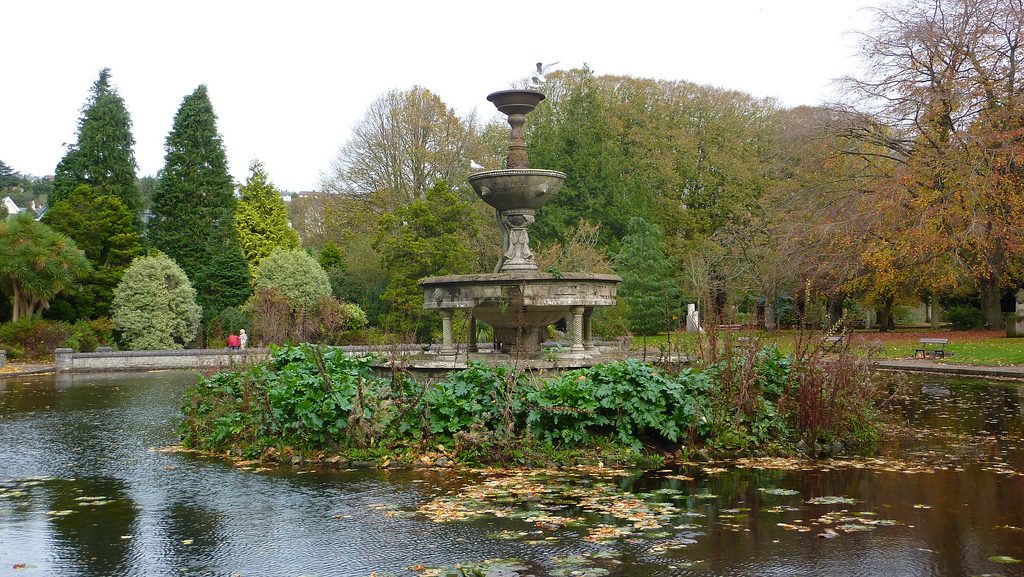 Blarney Castle and its tranquil gardens provide a reprieve from the buzz of the city centre but are only a quick bus or taxi journey of eight kilometres (five miles) away. This impressive castle – the oldest elements of which date back to the 1200s – is most well known for housing the ‘stone of eloquence’, said to give those who kiss it ‘the gift of the gab’. Previously, you really had to earn this gift, being lowered upside-down by your ankles into the space that the stone occupies, but luckily, you now at least have some metal railings to hold onto as you dip yourself down to reach it. 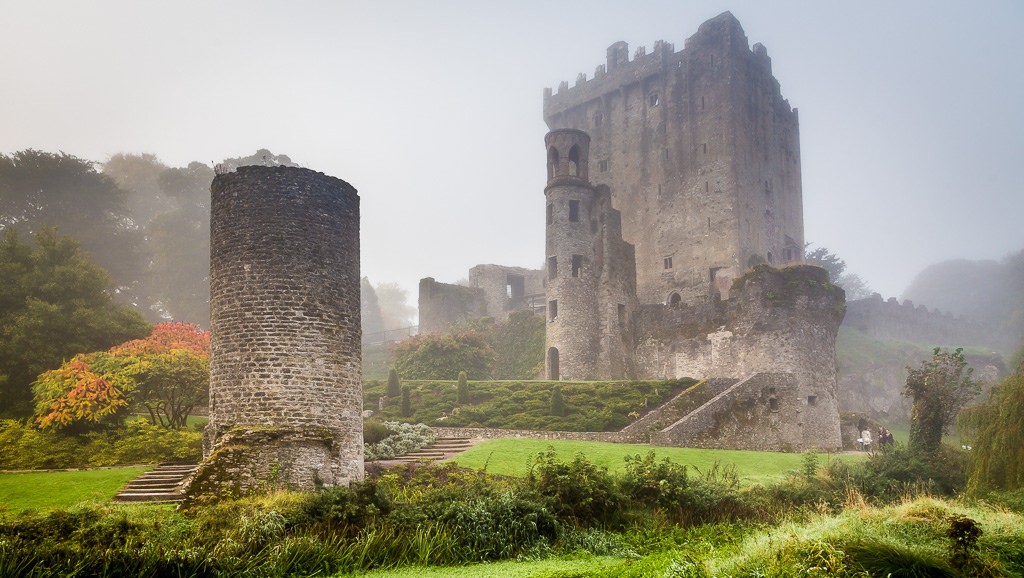 Fans of musician Rory Gallagher will want to fit in a visit to his memorial on Rory Gallagher Place (formerly Paul Street Plaza). The elegant iron sculpture features a guitar and a swirl of Gallagher’s most well-loved lyrics. The nearby Rory Gallagher Music Library on Grand Parade houses a dizzying array of Gallagher memorabilia, along with all types of music and related media. 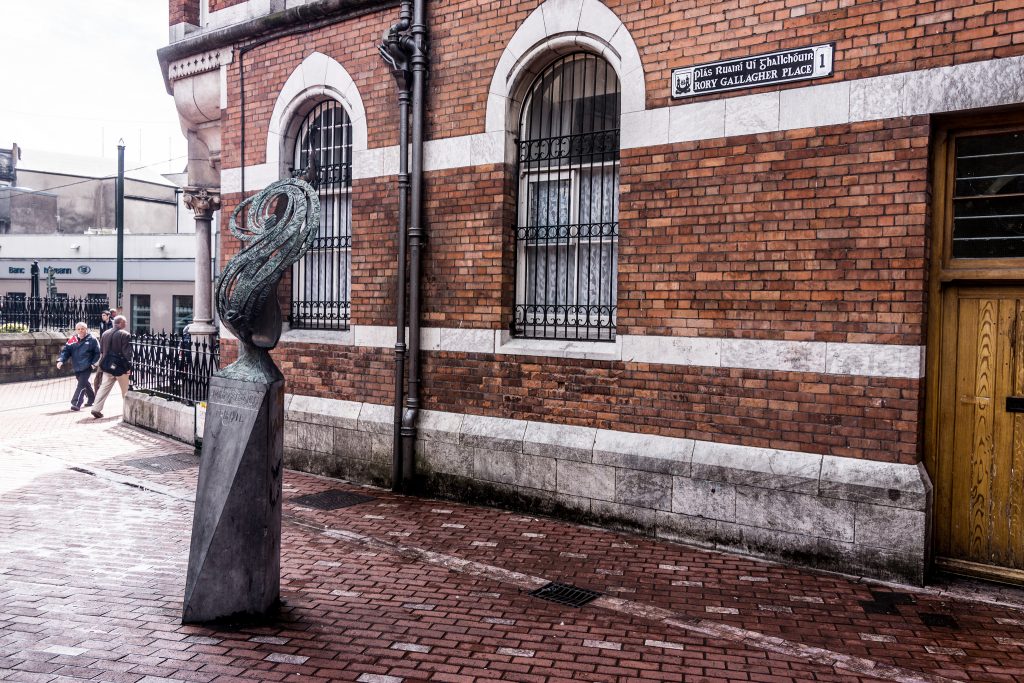 The National Monument on Grand Parade, erected in 1906, is a testament to the rebellions of 1798, 1803, 1848 and 1867. Cork is often known as the ‘Rebel City’ of Ireland, and four of the five statues here are devoted to revolutionaries – Wolfe Tone and Michael Dwyer of the 1798 Rebellion, Peter O’Neill Crowley of the Fenians, and Thomas Davis of the Young Ireland movement. The mythic figure of ‘Mother Erin’ is the central statue. 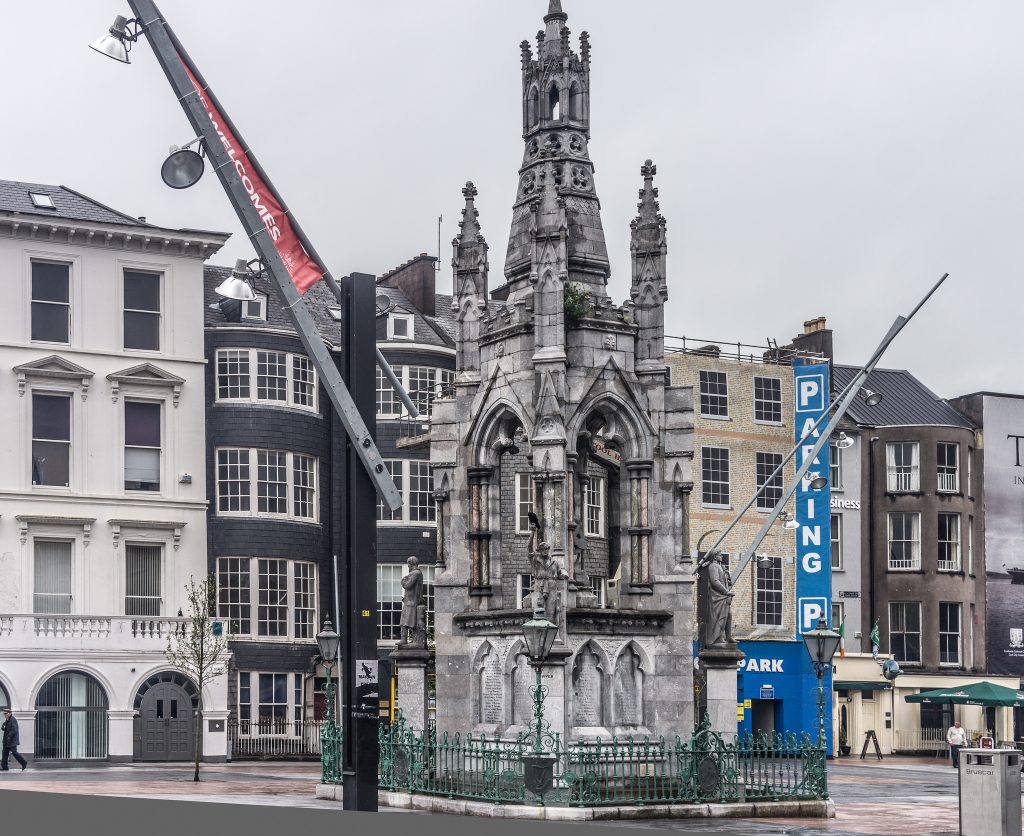 The first major work of Victorian architect William Burges, St Fin Barre’s Cathedral had gone significantly over its proposed budget of £15,000 by the time of its completion in 1879. Details such as the gilded ‘resurrection angel’ perched atop the roof may not have come cheap, but the result is an exemplar of ecclesiastical architecture. The cathedral has excellent acoustics, so consider it a bonus if you’re lucky enough that your trip coincides with one of their regular concerts. 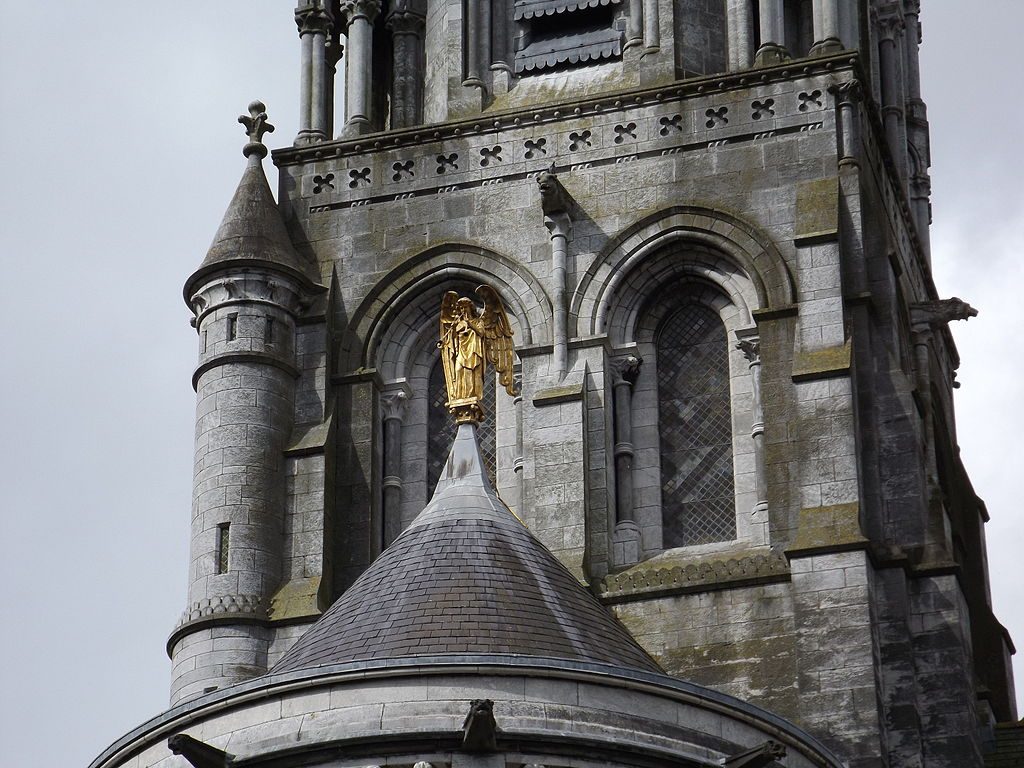 Market
Map View
English Market Cork | © Klabauter2/WikiCommons
The English Market is a well-loved social and cultural institution in Cork, as well as a place to find all types of deliciousness. A wander through this foodie warren gives an insight into the city’s reverence for provenance, from the family businesses that have anchored the market for generations to exciting new producers and artisans, all showcased in the most atmospheric of surroundings. Sample the market’s best offerings while people-watching from the mezzanine café.
More Info
Open In Google Maps
Princes Street, Centre, Cork, County Cork, Ireland
+353214274407
View menu
Visit website
Visit Facebook page
Send an Email
Give us feedback

Tucked away behind Bishop Lucey Park, around the corner from Patrick’s Street, is this portal to another time. Burial grounds don’t always make city must-see lists, but this is one of only two Huguenot cemeteries in all of Western Europe and commemorates an oft-forgotten refugee experience. Its creation was completed in 1733 as the final resting place for the most prominent Huguenots, who had fled religious persecution in France to live in Cork City and its environs. 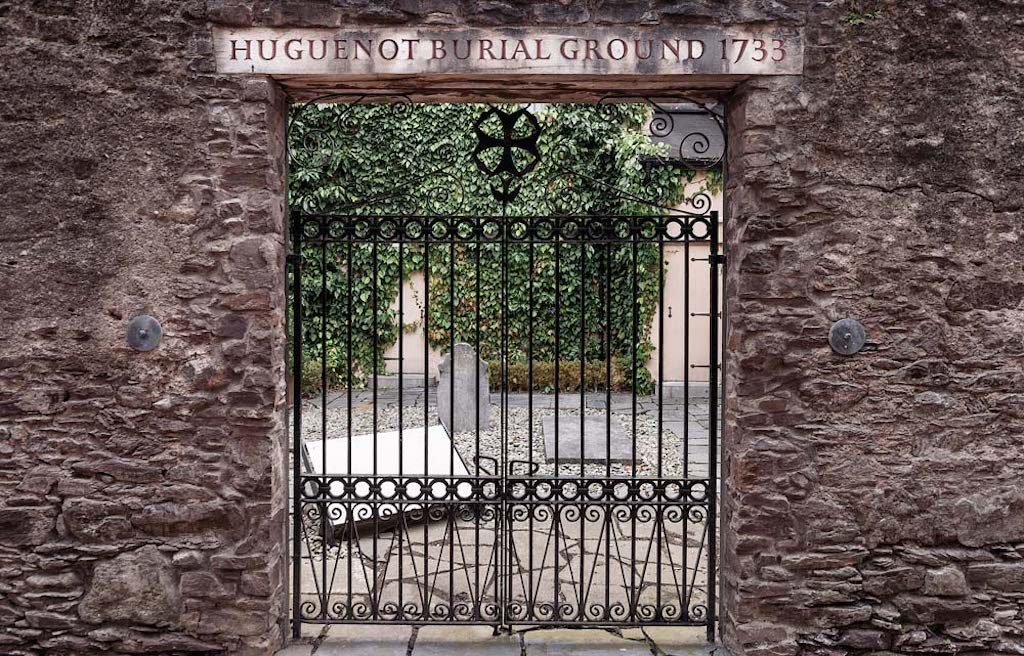 Cork Arts Theatre is an intimate venue, allowing the audience to feel as if they’re part of the show. An excellently curated calendar of events is presented to only 100 audience members at a time, and the cosy on-site bar extends the feeling of having somehow stumbled off the beaten bath. Check out their summer lunch-time series for shows that easily squeeze into the most jam-packed days of work or sightseeing.

St Peter and Paul’s Church is a beautiful refuge just off the main high street drag of Patrick’s Street, showcasing the best of 19th-century craftsmanship and architecture. The church holds baptism, marriage and death certificates dating back to 1765, so beyond its pretty face, it can serve as a useful resource for visitors who want to trace their family connections in the area. 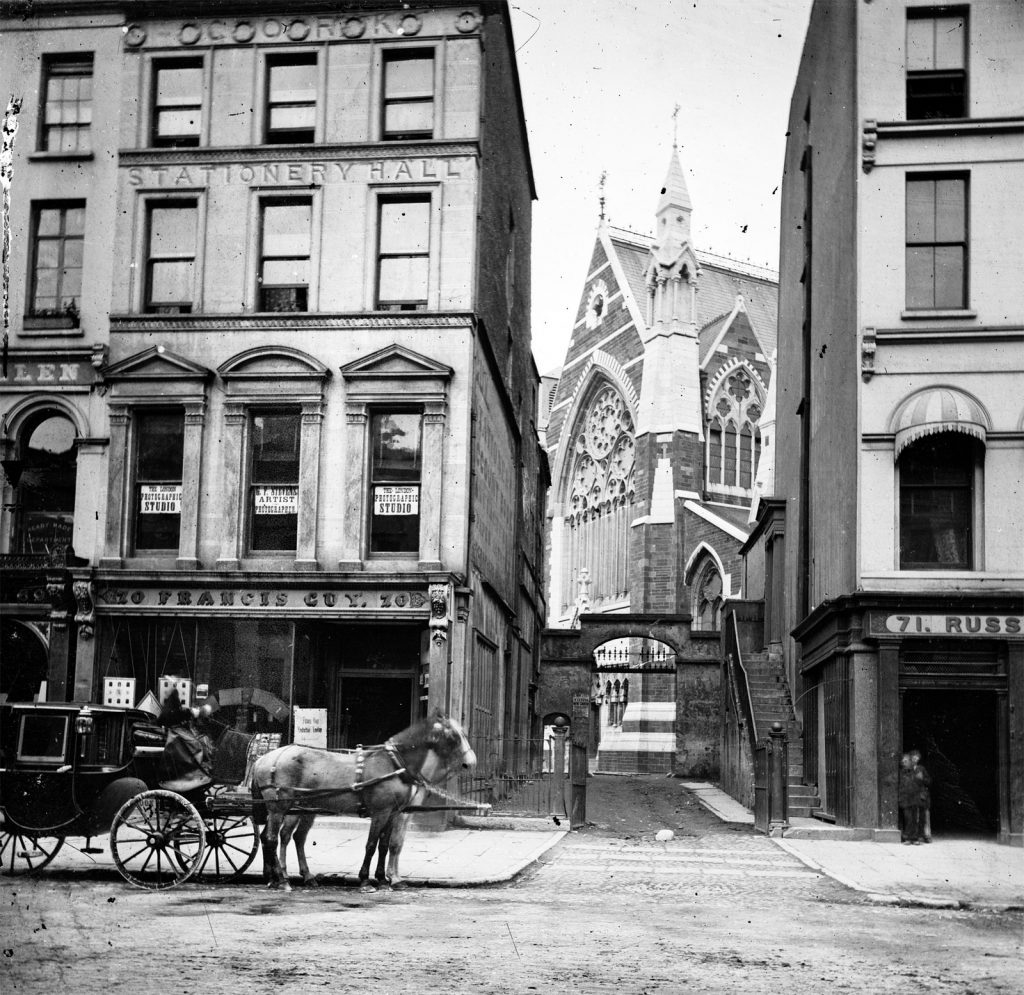 A visit to Blackrock Castle Observatory is a fascinating opportunity to explore an astronomical observatory within what is said to be the oldest surviving structure still in use in the city. This unique attraction effortlessly balances an appreciation of local maritime history with a view beyond our own planet to give a dose of perspective. 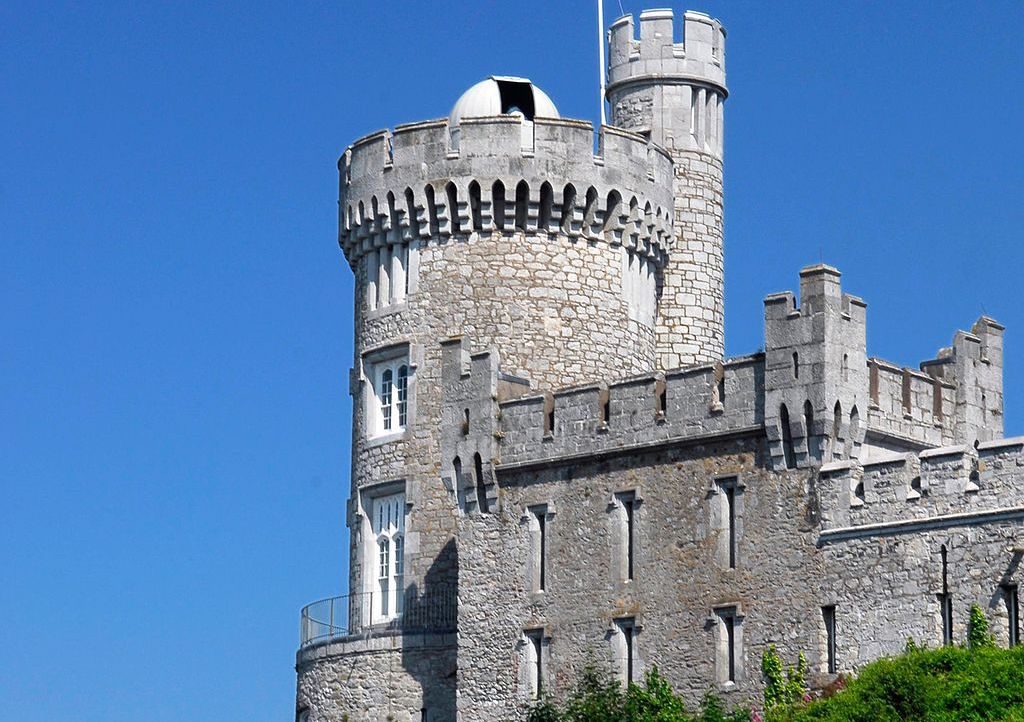 Described as ‘one of the finest remaining examples of a classical coastal artillery fort in the world’, Camden Fort Meagher dates back to 1550. Forming part of the harbour’s fortification system, it expanded gradually over the centuries. You can now wander through the deserted, windowless ramparts and around its craggy stone walls for an eerie insight into the history of Cork’s maritime defence. The fort is a 40-minute taxi or hour-long bus trip from the city and sits at the mouth of the harbour – once there, the picturesque town of Crosshaven is well worth lingering in for lunch. 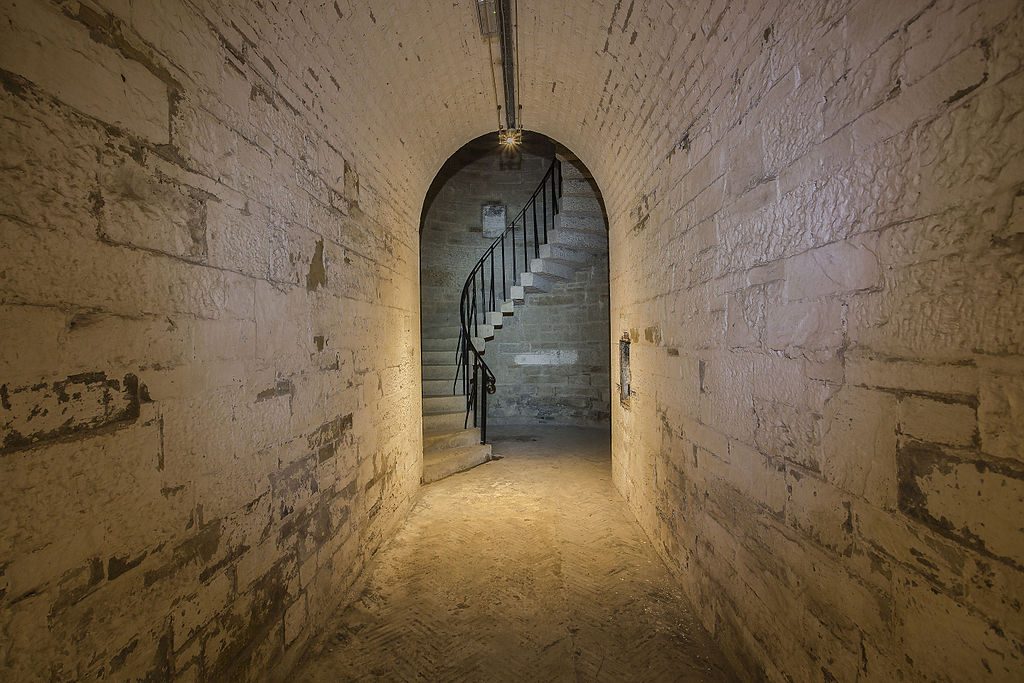