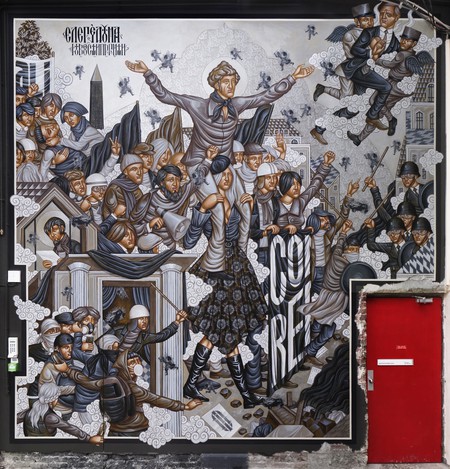 As one of the pioneering artists in the street art scene that flourished in the 1990s in Greece, Stelios Faitakis is famous for his allegoric paintings, where he combines the Greek orthodox iconography with street art. The man who used to sign his graffiti designs with the moniker ‘Bizare’ is among the few artists who refuse to leave the country despite the ongoing financial crisis.

After graduating from the Athens School of Fine Arts, Faitakis is among the best-known artists in Greece. Though he rose to fame as a street artist, he now prefers the quietness of his studio. Not because he grew snobbier with age, but simply because he often takes more time than he used to to create his paintings and murals. 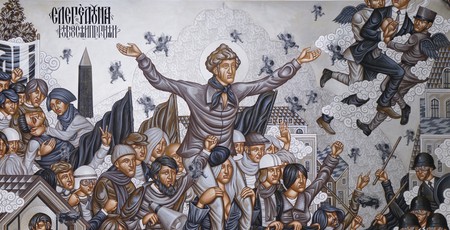 Faitakis’s work is the fruit of various influences, such as graffiti, Mexican muralism and urban culture, and includes subjects ranging from history and politics to social unrest, resulting from his extensive observations of society as whole. His trademark is the intensive use of the color gold and images of halos, which he uses to remind the viewer that there is always a higher level of existence, even though we are not conscious of it. 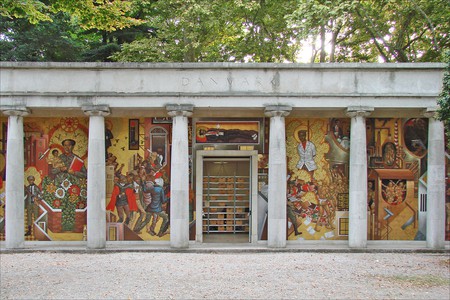 Throughout his career, Faitakis’s works have been presented at many international shows, such as the first Athenian Biennale ‘Destroy Athens’ in 2007, the Venice Biennale in 2011, the Kiev Biennale in 2012, and in a group exhibition entitled ‘Art in the Street’ in Los Angeles. More recently, Faitakis was commissioned to do murals at the Palais de Tokyo in Paris for the occasion of the fifth annual Jean-François Prat Award, for which he was nominated in 2014.

One of the highlights of his career was when Faitakis was invited by the Wynwood Walls in Miami and travelled to America for the first time. His mural for the occasion depicted his impressions of the collapse of American society. 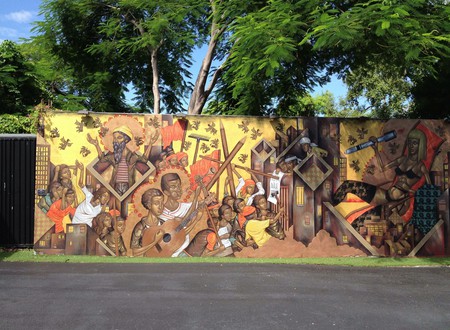 Living and working in Athens all his life, Faitakis hasn’t considered moving out of Greece to escape the crisis, as he believes it offers a lot of themes on different levels; the key is simply to open your eyes and start exploring.

If you are interested in Faitakis’s works, drop by the Breeder Gallery in downtown Athens. The gallery, set in a former ice cream factory, aims to facilitate the long-term development of international and Greek artists’ careers.