Inside Lindsay Lohan’s Nightclub in Athens 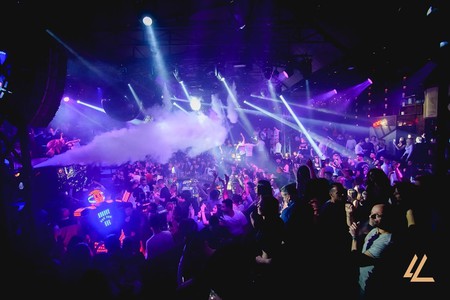 What does a night inside Lindsay Lohan’s Athenian nightclub look like? Culture Trip investigates.

If you grew up knowing Lindsay Lohan as the aspirational lead of Parent Trap, Freaky Friday and Mean Girls, then a trip to her nightclub in Athens could only elicit excitement. Lohan’s departure from acting was bemoaned as a tragedy by many of her fans. Thankfully, one of her many new enterprises (alongside fighting Grand Theft Auto and becoming a spokesperson for laywer.com) is doing its bit to revive the magic of her on-screen presence. Not, though, in the way you might expect.

Situated on the border of Gazi and Metaxgeouia, LOHAN is an anomaly in the area. The street runs from central Athens to the northern suburbs, passing one of Athen’s best-kept secret gardens. Nearby, bouzoukia clubs and concert venues draw more traditional Greek acts. It’s not the first place one might expect to find a Hollywood star’s nightclub. LOHAN was a disruptive presence when it arrived in 2016.

But two years on and LOHAN continues to make its mark. On any given night, you’ll find a host of shiny black Range Rovers in the concrete parking lot outside. Bouncers guard the doors imposingly while party-loving men and women ready for a Big Night Out check themselves off of the guest list. It’s all heels and open-collar shirts – more reminiscent of a scene from Mykonos in peak summer than the laid-back style of locals.

LOHAN specialises in bringing international DJs to the space and providing ‘a premium dance experience.’ Lohan and businessman Dennis Papageorgiou co-founded the club. On the opening night of LOHAN, Lindsay cited the refugee crisis as one of the main reasons for wanting to open the club. Some years later, the charitable narrative may have been quietly removed, but the desire to create a space where people can come together and savour a wild night remains.

The club isn’t somewhere that many Athenians seem to go, but it certainly has its audience. Entry usually costs €15, and if you want to get a VIP table, there’s a minimum spend of around €600. That’s cheap by some standards, but unless the allure of a super-club appeals, it’s easy to get cheaper entertainment elsewhere in Athens. LOHAN is a destination for clubbing in the most extreme iteration. If you’re not committed, you’re not going to have a good time.

The design of the space enforces this message. The atmosphere of decadence promises something decidedly different, especially in a city struggling with an economic crisis. Bright pink flowers and neon lights outside promote the escapist experience offered. The overall impression is loud and hedonistic.

Inside, spectacle abounds. There are smoke cannons and sparklers, dancers dressed as robots, and dancers dressed in little, who move above the crowd, whipping up the atmosphere. Night-long light shows keep the people entertained, and the occasional confetti cannon means you’re never short on novelty. The DJs cater to a specific kind of house-loving audience, and they do it well.

By the 5.30am close, the crowd is sweaty, drunk and elated. Lindsay Lohan’s nightclub might be a far cry from her wholesome acting career, but it’s proof that she still knows how to entertain.