Depiction of a hunting scene on a dagger found in Grave Circle A, Mycenae, 16th century BC | © Unknown/WikiCommons

For more than a century, archaeologists have been intrigued by the origins of the Bronze Age Minoan and Mycenaean cultures, which populated the island of Crete and the mainland respectively. But a recent DNA analysis has revealed that the two ancient civilizations were actually genetically similar and that they descend from the early Neolithic farmers.

According to a genome-wide association study, published in the science journal Nature, the Minoans and Mycenaeans most likely migrated from Anatolia to Crete and mainland Greece 1,000 years before the Bronze Age. Furthermore, the study points out that modern Greeks are probably descendants of the Mycenaeans. But let’s back up a little. The discovery of Minoan and Mycenaean civilizations in the late 1800s provided a much-needed glimpse into the European Bronze Age, a period which was only previously known through Homer‘s Iliad and Odyssey.

Excavations revealed that Minoans flourished in the island of Crete around 3,000BC, that they had advanced technological and artistic knowledge and were among the first literate civilisation in Europe. The Mycenaeans, on the other hand, prospered in continental Greece during the second millennium BC and both civilizations had a lot in common such as the use of Linear B, which is an ancient form of Greek. 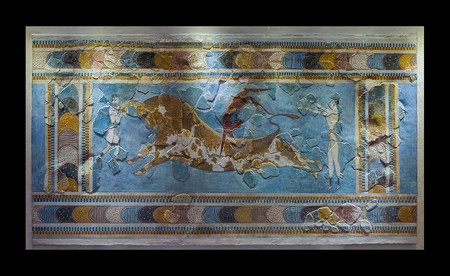 For over 100 years, the origins of these two civilizations puzzled the archaeologists who believed they both were descendants of distinct populations. However, with this new analysis carried out by an international team of researchers from the University of Washington, Harvard Medical School and the Max Planck Institute, as well as archaeologists and other collaborators in Greece and Turkey, genomic DNA from the human remains dating from the Bronze Age collected in mainland Greece and Crete, as well as southwestern Anatolia, has been studied in depth.

The results of the study indicate that the Minoan and Mycenaean civilizations were genetically similar, but not identical to modern Greeks. Apparently, Minoans and Mycenaeans descended mainly from the early Neolithic farmers, who migrated from Anatolia (or modern-day Turkey) thousands of years before the Bronze Age, plus there was some genetic input from populations originating from the Caucasus and Iran. This shows that subsequent migrations from the East occurred after the arrival of the first Neolithic farmers.

The ancient city of Mycenae, in Greece | © Andreas Trepte/WikiCommons

Another interesting fact is that the Mycenaeans also had traces of ancestry from the Eurasian Steppe and Armenia, which wasn’t the case for the Minoans. This implies that a previously unknown migration event from the northern steppes reached mainland Greece, but not Crete. Furthermore, the study shows that modern Greeks are related to the Mycenaeans, but with some dilution of the early Neolithic ancestry. As such, it seems that there is indeed a sense of continued ancestry in the Aegean, but that most likely, the populations were not isolated at all.

While this new study does not solve all the questions, it provides important answers and helps build a clearer idea of the origins of Greek civilization.