The Best Things to See and Do in Tilos Island, Greece

An island far from the crowds of the more popular Rhodes, the little island of Tilos, with its rugged mountains, verdant hills and picturesque beaches, is one of the few remaining islands where visitors can experience authentic island life. Tilos, in the Dodecanese, is one of the greenest places in Greece, and seduces travelers in search of respite and tranquility. Here are the best things to see and do in Tilos.

Take a walk in Mikro Chorio

A deserted village between Livadia (the main port) and Megalo Chorio (the island’s capital), Mikro Chorio boasts ruins of imposing buildings and stone houses. Abandoned after the 1940s, this ghost town has a small bar that only runs during the summer, as well as a stunning whitewashed church that overlooks the settlement. Don’t visit without exploring the 14th-century castle built by the Knights of the Order of Saint John. 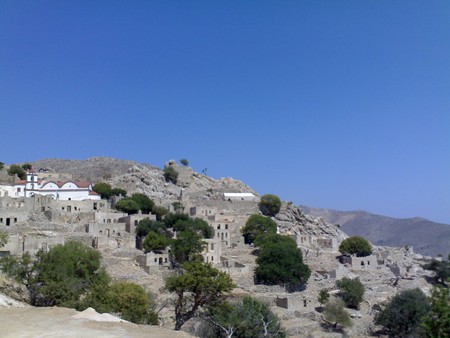 Spend the day at Livadia beach

The main port of Tilos, 7 kilometers from Megalo Chorio, has traditional houses, picturesque churches and the ruins of medieval castles nearby. The highlight is certainly its beach, located next to the port. Well organized, this is a long sandy beach where you will find sunbeds and umbrellas as well as cafés and tavernas in which to enjoy a delicious meal after a long sunbathing session. 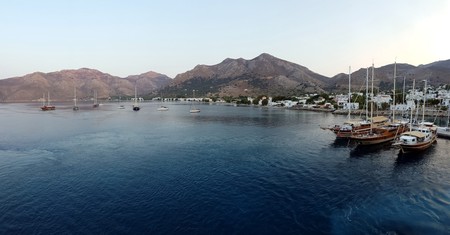 While the construction project for an archaeological museum in Tilos is underway, you can still enjoy archaeological and paleontological finds at the museum Tilos, housed in the town hall in Megalo Chorio. Get acquainted with statuettes, sculptures from the Classical and Hellenistic periods, and ancient inscriptions and pottery. The paleontological collection includes fossils of dwarf elephants, the only extinct species of elephant found in Europe. These were discovered in the Charkadio Cave, near Megalo Chorio. Once you are done, make sure to stroll around the alleys and streets and get lost in the small capital. 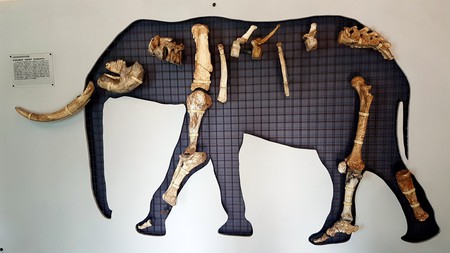 Located 2 kilometers south of Megalo Chorio, at the centre of the island, the Charkadio Cave has become an important sight after a phenomenal discovery of 1971 by the geologist and speleologist Nikolaos Simeonides. His team brought into light Neolithic artifacts, including hunting tools and pottery. But the most important discoveries were of the fossilized bones of elephants, turtle and deer within the cave. According to scientists, dwarf elephants lived on Tilos 45,000 years ago and disappeared about 4,000 years ago.

The Taxiarchis Church, also known as the church of the Archangel Michael, is one of the oldest monasteries in the Dodecanese. This peaceful haven, built in 1425, is located within the castle of Megalo Chorio, and stopped operating in the 19th century. You will be charmed by its pebbled yard, as well as by its carved wooden iconostasis from the 19th century and impressive bell tower. 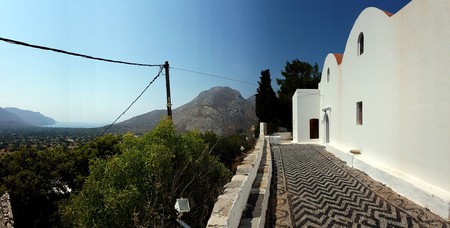 Explore the medieval Castle of Tilos

Located on top of Megalo Chorio, the castle was built by the Knights of Saint John in the 15th century, while the church of Archangel Michael located within was built later on. Once home to an entire village, the castle was deserted around the 18th century, when piracy was prohibited. While not much remains of the castle, the external wall, the cisterns and the ruins of the nearby Messaria fortress, built around 1366, are visible. This is also an excellent place to watch the sun sets over the Bay of Agios Antonios.

Perfect your tan at one of the beaches

Crystal-clear waters, idyllic stretches of sand and pebbles: this is what you get in Tilos. While the most popular beach is Livadia, there are plenty of other beaches to discover, such as the quaint Agions Antonios, with its small fishing harbor, or the beautiful Plaka, tucked in the western part of the island. Eristos beach is also a favorite, thanks to its golden sand, but we are pretty sure the pebbled shores of Lethra will still charm you. You will also find beaches accessible only by boat, such as Skafi, Agios Sergios or Tholos. 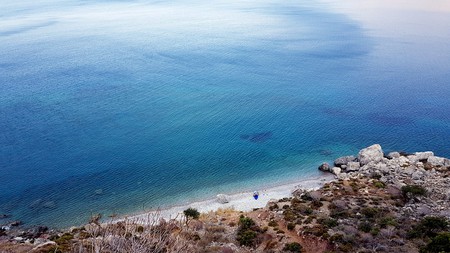 Visit the Monastery of Agios Panteleimonas

Undeniably the most important church on the island, the Monastery of Agios Panteleimonas, dedicated to the protector of the island, is worth a look. Standing at the end of the only road on the island, this important site of pilgrimage was built in the 15th century and includes spectacular Byzantine frescoes. Set in a lush area, the monastery is also home to a wooden iconostasis dating from the 18th century.

Take advantage of the old pathways

Tilos is a paradise protected under the Natura2000 network, and the best way to explore it is hiking. Thanks to the networks of old marked tracks, you can wander inland, discover the fascinating and unspoiled nature of the island and quickly understand why ecology is dear to the locals. Take it all in, smell the local flora and open your eyes. You may come across abandoned churches at the bend of a track or stumble upon forgotten ruins. You may never want to leave this green paradise. 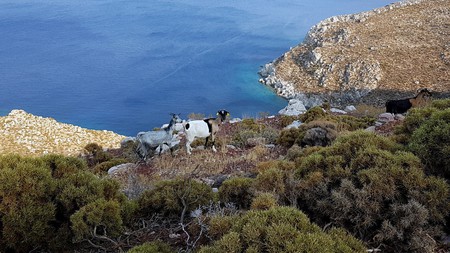 Since the whole island is an ecological park, Tilos is home to over 100 bird species, some of which are endangered or rare. Come with your gear and you may catch a sight of a peregrine, a Bonelli’s eagle or an Eleanora’s falcon. Just remember not to be a nuisance to them.