The Best Restaurants in Paxos, Greece 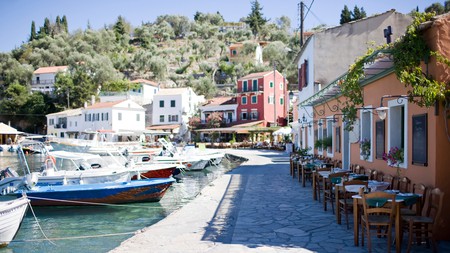 Look out over bobbing boats while you dine on Paxos, Greece | © Henry Lederer / Getty

The restaurants in Paxos, Greece, are a feast for the senses. Velvety Greek yoghurt, honey-drizzled feta and boat-fresh fish are served in romantic garden courtyards and beachside spots on this idyllic Ionian isle. Here’s our pick of the best places to eat.

Reached only by boat from neighbouring Corfu, the low-key Ionian island of Paxos has a slow-going charm that seeps into its Venetian-influenced culinary traditions. The scenic main harbours of Loggos, Lakka and Gaios host seafront restaurants, while small-scale Greek tavernas await among olive groves and off-the-beaten-track beaches. From sea-hugging, fish-serving terraces to smart Mediterranean-inspired hangouts, these restaurants serve up a treat. 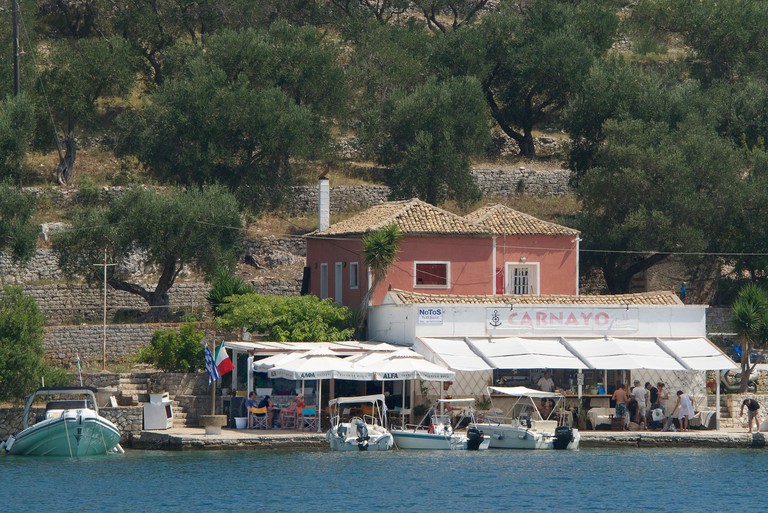 © David South / Alamy
Framed by olive trees, just a five-minute wander from the tranquil yacht-dotted seafront of Gaia, Carnayo is one of the unmissable addresses on the island for home-cooked Paxiot cuisine. It’s a traditional stone-and-wood creation, with a romantically lit garden courtyard, where you can sample delectable mezze platters (octopus with fava beans, courgette-and-feta fritters) before moving onto regional signature mains such as bourdetto (a spicy seafood-and-tomato stew). There’s also an impressive selection of Greek wines, along with live music several nights a week. 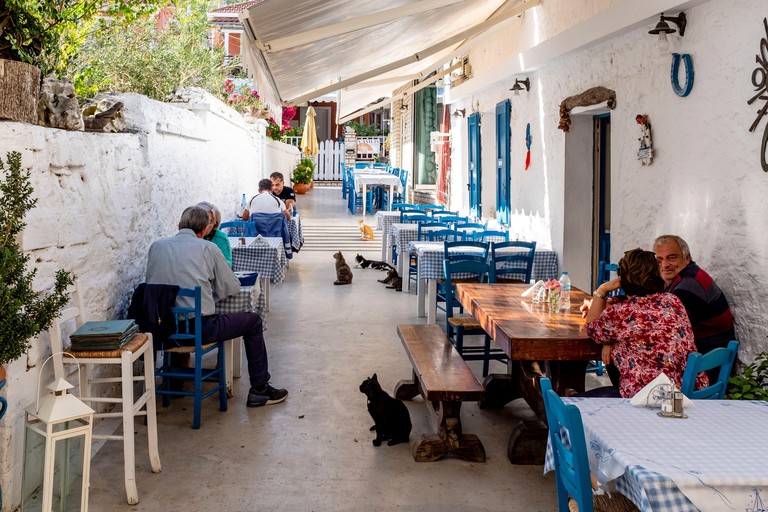 © GRANT ROONEY PREMIUM / Alamy
Family-owned Vasilis has been cooking typical Ionian delights near the waterfront in forest-fringed Loggos, in northeast Paxos, since the 1990s. Now, elegant taverna-inspired recipes are prepared with a splash of contemporary flair, including squid with mango salad, crunchy feta-stuffed aubergine rolls, and fresh grilled octopus with fava beans. Start with a bottle of Corfian white or assyrtiko from Santorini, and wrap up with an osmalieh pastry dressed with flower-water cream. 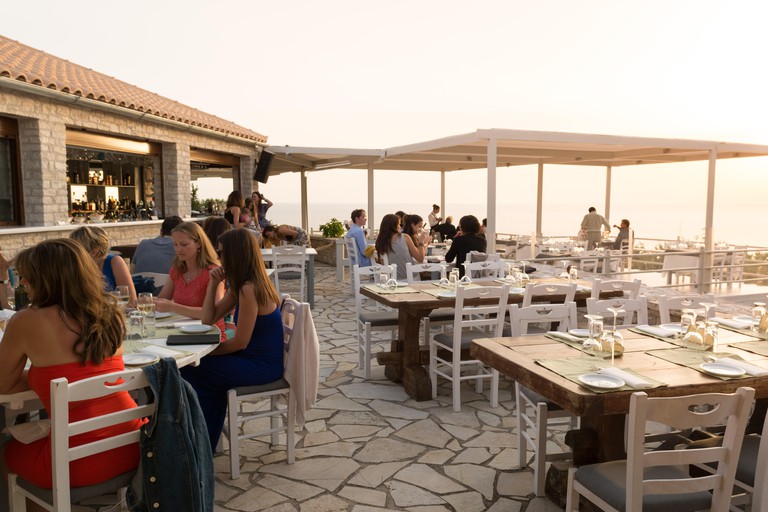 © Kay Roxby / Alamy
This glamorous west coast sunset-spying spot overlooks Erimitis beach, just outside Magazia village. Popular for serving creative cocktails on the deck and having smartly updated Paxiot-Mediterranean cuisine, it’s the long-running creation of a Greek-British couple. The seasonal menu wanders from tiger prawns with linguine to guinea-fowl pastitsada (pasta topped with a braised-meat-and-tomato sauce), with desserts devised by respected pastry chef Antonis Selekos. Arrive early to savour the sky blazing pink over the Ionian Sea with a glass of Santorini white.

Tables trickle down through olive trees towards Levrechio beach at this delightful seaside taverna known for terrific Greek staples, just east of Loggos. The fried courgettes, home-baked bread and fresh squid are worth a visit alone, but there are also perfect pastas tossed with lobster, grilled fish of the day and, for dessert, velvety Greek yoghurt with island honey. The shady setting, with views across the Ionian Sea, evokes all that’s wonderful about Paxos. 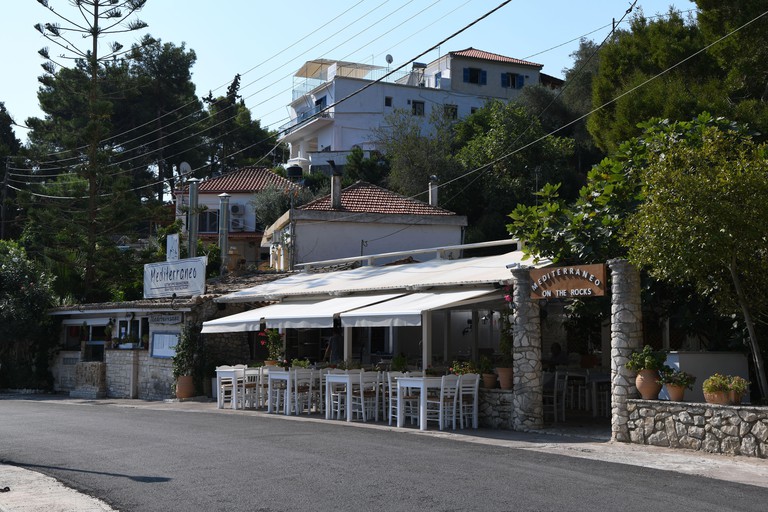 © Stuart Manktelow / Alamy
Gaia’s Venetian-village architecture, teal-toned channel and offshore islets provide the backdrop for this blue-and-white seafront tavern, with a family history going back to the 1990s. Many of the vegetables come from the restaurant gardens, while the fish and seafood is plucked fresh from the surrounding waters. Don’t miss local classics such as octopus with onions and fava (broad beans), cuttlefish risotto or bianco (a fish stew from Corfu with lemon and potatoes), or any of the tempting daily specials. 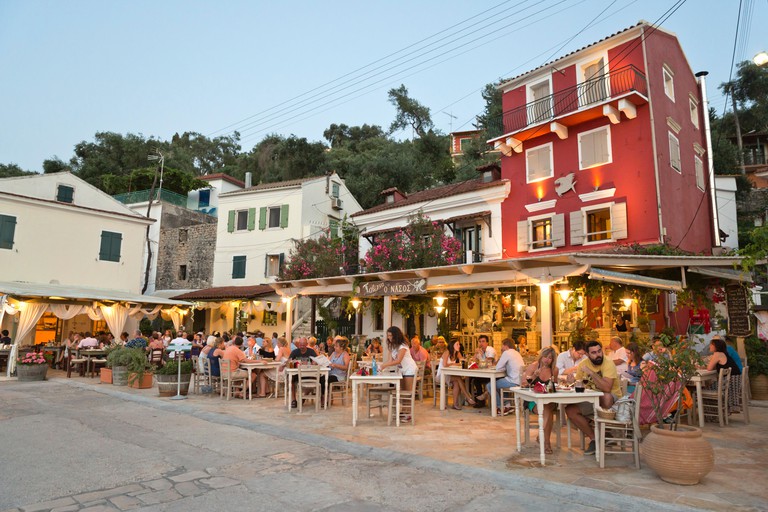 © robertharding / Alamy
Another well-established favourite for fresh seafood and Ionian staples, Nassos is a warmly welcoming taverna basking in coastal views from its harbourfront perch in Loggos. Dishes change daily depending on what the fishing boats bring in, with specialities including lobster spaghetti, spiced bourdetto and grilled octopus. It’s all paired with plates of honey-drizzled feta and house wines that arrive by the jug.

Both the magical waterfront location and the Greek-Italian cooking wow at this breezy lounge bar and restaurant on Mongonissi beach, just off the southern end of Paxos. Long lunches of grilled octopus, seafood spaghetti and feta-filled country-style salads are served on a sun-bathed deck overlooking the yachts. It’s also perfect for lingering over wines from the mainland and carefully curated cocktails.

A beloved address for waterside dining in go-slow Lakka that blends Italian cuisine with fresh Paxiot produce. It’s been going since the 1990s, with standouts on the menu including rich lobster spaghetti, risotto bursting with the fruits of the sea, traditional Greek prasopita (leek pie) and all kinds of grilled local fish, from snapper to sea bream. Marble-topped tables sit right on the harbour, with panoramas across the pine-lined bay.

The fresh seafood hauled in each day is the star of the show at this popular address on the buzzy main waterside square in Gaios. Blue-cloth tables huddle under terrace umbrellas and an ice bar displays your choice of squid, lobster and more. You can’t go wrong with a mixed-seafood platter to share (and a jug of house wine), or a few mezze dishes and a Greek salad followed by spaghetti with shellfish. 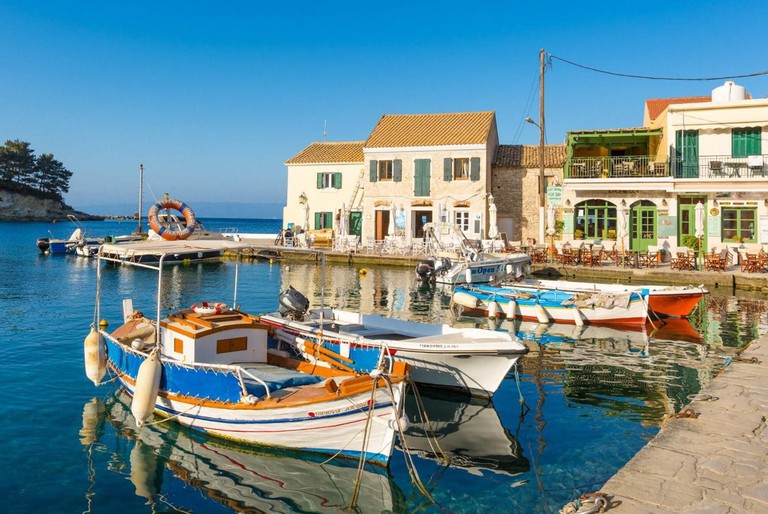 Courtesy of Spiros Jetty House / Expedia
Boating across from Gaios to the small, almost uninhabited, neighbouring island of Antipaxos is a highlight of any trip to Paxos. A couple of informal summer tavernas dot the two sandy northeast strands, where Taverna Spiros on Vrika beach is a favourite. After a few mezze dishes (stuffed vine leaves, cool tzatziki), rustle up a platter of fresh barbecued fish drizzled with lemon or a delectable spaghetti with mussels, and gaze out on one the prettiest beaches in the Ionians.

Want more? Browse our list of the best hotels on Paxos, all bookable with Culture Trip. Or there are many other beautiful Greek islands to visit, plus the most epic beaches. If you want to branch out further, visit Culture Trip’s ultimate bucket list destinations to satisfy your wanderlust.