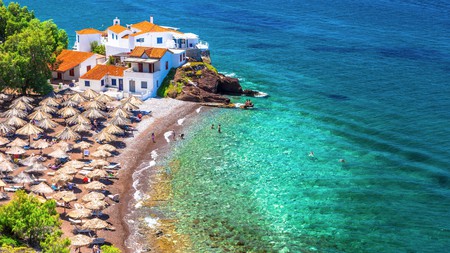 From hiking along mighty canyons in Crete to drinking ouzo in Kefalonia, there’s so much to do on the Greek islands; and just because summer is fading, it doesn’t mean they’re off limits. We’ve picked the sunniest islands in Greece to help you plan the ultimate winter adventure, away from the summer crowds.

When you think of the Greek islands, you probably picture beautiful beaches, sunny strolls and amazing food. What if we told you that this image can apply to wintertime, too? Some of these Greek destinations guarantee relatively warm temperatures and sun all year round, which makes them a delight to explore even during the quieter winter months. Pick one and start dreaming of your next sun-filled escape to Greece.

Floating partly in the Libyan Sea north of the African coast, it’s no wonder Crete is one of the hottest islands in Greece. Temperatures are relatively high here even during the winter, ranging from 13C to 17C (55F to 63F), with plenty of sunlight. Swimming in these dreamy waters might not be an option at this time of year, but Crete is full of natural treasures and historical wonders which can be best enjoyed when there are no other tourists around. From the ruins of the Minoan civilisation at the ancient palaces of Knossos and Phaistos to rugged canyons such as Samaria Gorge – try the six-hour hike for some spectacular views – wintery Crete does not disappoint. And if you still crave the sea, you can go surfing at Falassarna Beach. Don’t forget to check out the many cultural events taking place all year round, or taste divine food in the traditional taverns. 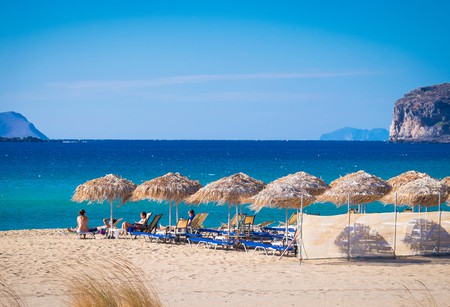 This cosmopolitan island never loses its charm or finesse, which can be largely attributed to its Venetian architecture, not even when it rains. Still, there are plenty of sunny days to be expected here in the winter, with temperatures rising to 14C (57F). Stroll along the winding alleys of the Old Town, amid beautiful monasteries and Byzantine churches, neoclassical houses and Venetian fortresses, before sitting by the fireplace at a local tavern by the sea, for a sip or two of the strong kumquat liqueur. Blessed with dense forests brimming with hiking trails, Corfu will appeal to naturalists and adventurers alike. Don’t miss the elegant palace of Achilleion (Elisabeth of Austria’s former summer residence) or the lush islet of Pontikonisi just across Corfu. Christmas here also feels special, with lots of festivities and children going from door to door singing carols. 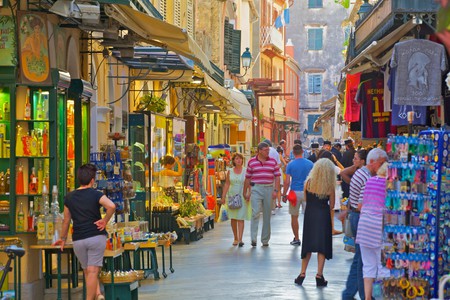 Even though Chios is not generally as warm as other Greek islands in the winter, temperatures can still reach 15C (59F) here on a sunny winter day. The island is dubbed the Mastic Island, since it’s famous for its large exports of mastic gum, or mastiha; the resin is excreted from the local mastíkha tree. Winter is also citrus season so there’s a gentle scent of lemons and oranges in the air this time of year. Apart from the local delicacies, you’ll be sure to find pretty villages and quaint churches, such as the Unesco-listed, 11th-century Monastery of Nea Moni, whose elaborate frescoes on the walls are among the finest examples of Macedonian Renaissance art in Greece. The most impressive of the villages has to be the medieval Pyrgi, known as the Painted Village – the facades of its houses are adorned with geometric patterns chiselled onto white plaster. 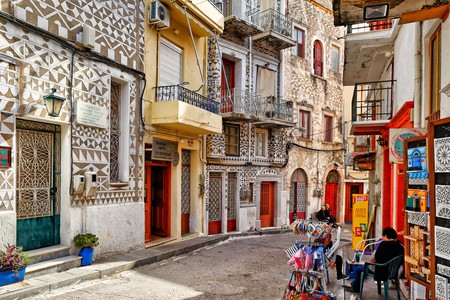 If you’re looking for a low-key winter escape, look no further than the islands of the Argo-Saronic Gulf. Lying just over two hours from Athens by ferry, the island of Poros may experience some downpours but it is generally sunny and warm during the winter months – temperatures range between 12C and 16C (54F and 61F). This tiny island looks nothing like the extravagant Mykonos or Santorini, yet it will win you over thanks to its nostalgic, quiet ambience and unassuming architecture. Walk around the charming port or sit in one of the many cafes that line it. It’s worth climbing to the gorgeous 1927 clock tower, the highest point of the island, to take a photo of the moored boats or simply take in the incredible sunset views, as a lemon and pine scent permeates the air. 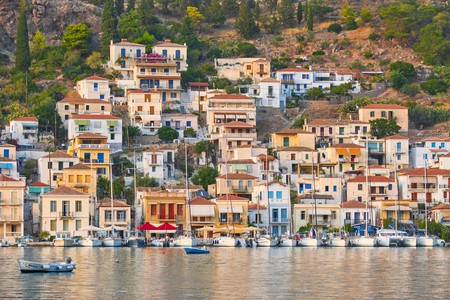 One more Argo-Saronic island worth putting high on your travel list is Hydra. Temperature here lies around 15C (59F) in winter and, with the exception of wet Decembers, there’s plenty of sunshine. Slightly more refined than Poros, yet just as naturally beautiful, Hydra is the home of artists and bohemians. Henry Miller, Pablo Picasso and Leonard Cohen are among those who’ve fallen in love with the island ever since the ’40s. In fact, Cohen bought a house here in 1960 that ended up being his home for seven years. Marvel at the 18th– and 19th-century stone mansions that dot the port – some look like fortresses with intricate frescoes on the inside – and bask in the silence stemming from the complete absence of motor vehicles, before visiting Hydra’s museums, which recount the island’s history that goes all the way back to 3000 BCE. Hiking enthusiasts will appreciate the 80km (50mi) of trails running across the island. 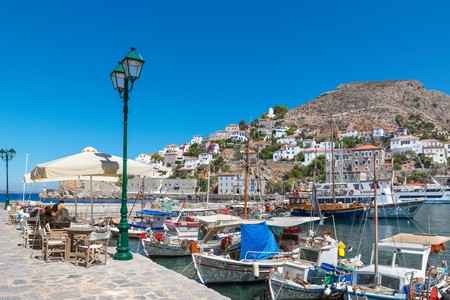 With the exception of a few rainy days, Kefalonia boasts clear blue skies and an overall warm climate in winter. Temperatures will probably not rise higher than 12C or 13C (54F to 55F) in January and February, but it is still a great time to take long walks and get to know the island when it’s at its quietest. Traffic slows down considerably in the capital of Argostoli, which allows for peaceful strolls along the pebbled promenade that surrounds the natural harbour – one of the few in the Mediterranean. It is still a pretty lively place, though, as a great number of markets and shops continue to operate here. Meet the locals at the cafes for a game of backgammon and enjoy a glass of the intense ouzo (or two, if you can handle it). Hiking trails, nature and wildlife abound; go bird watching along the 6.6km (4mi) Enos Trail, lined with wild flowers, and take a boat ride on the serene Melissani Lake. The picturesque villages of Fiskardo and Assos are a must – hike up to the latter’s castle for some of the best views on the island. 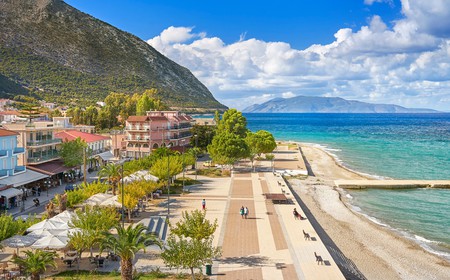 Hot summers and mild winters (up to 16C/61F in December) make this Dodecanese jewel an ideal destination worth visiting any time of the year. Besides, medieval castles, ancient temples and the awe-inspiring Acropolis of Lindos would look impressive no matter the weather. Stroll along the Street of the Knights, explore the 160 chambers of the 14th-century Palace of the Grand Master and make your way up the 300 steps of the Monastery of Tsambika to enjoy the view. If you’re more of a party animal, try bar-hopping in Faliraki village (recommended only for serious clubbers), and if you’re into wine tasting, pass by the various vineyards and taverns serving sweet wine in Embonas village, the centre of wine production in Rhodes. You can also try horse riding on a beach, with the help of organisations such as Kadmos or Elpida. 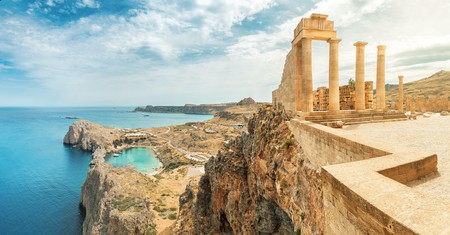 Temperatures on Karpathos can get scorchingly high in summer (think 40C/104F), so visiting the island during winter when it’s only 17C (63F) is actually a wise choice. Probably the least commercialised of the Dodecanese islands, Karpathos guarantees an authentic Greek island experience that involves picture-postcard villages and delectable cuisine, next to abundant, unspoiled nature. Follow the various trails on the island and hike your way through high mountains, pine forests and untouched valleys to reach ancient sites, secluded beaches or tiny villages such as Tristomo, and colourful ones such as Olympos; while here, try a patterned headpiece with golden details, sold by local women in traditional attire. 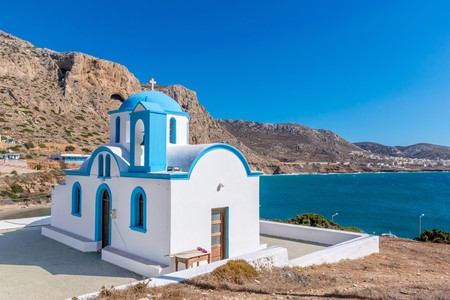 Holidaying in Greece on a budget? Read the Culture Trip guide to the most affordable Greek islands that you can visit. Alternatively, see the best Greek islands you can fly directly to.