Rembetika: The Blues Of Greece 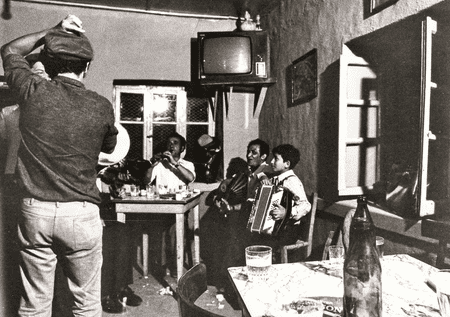 Rembetika (pronounced [reˈbetika]) is the plural of rembetiko. Rembetiko is beyond a genre of music; rather it is a state of mind. Culture, tradition and expression of social concerns are combined to form the lines and ideas behind the rembetiko song. We take a deeper look at the history of this special form of music and how it encapsulates the soul of Greece.

How it started: rembetiko’s journey to Greece

Rembetiko is a kind of Greek folk music which started in Asia Minor, more specifically, in Smyrna and Constantinople. After the 1922 occupation and destruction of Smyrna, the refugees who sought shelter in Central Greece, along with their few suitcases and memories, also brought with them their culture and music. This is the reason why rembetiko started expanding through Greece’s main ports, such as Piraeus, Thessaloniki, Volos and Syros, and around 1930 the dawn of rembetiko had begun. People would gather in small taverns with a few musical instruments and, along with a glass of wine, would openly express their pain, fears and nostalgia for the past. Although these individuals were homesick, a sense of hopefulness still resonated within their songs, like Sotiria Bellou’s ‘On Aeroplanes and Steamers’ which speaks about friendship, immigration and fate.

The etymology of rembetiko is not clear, but it is speculated that it may have come from the Greek verb relating to wonder (rembazo). The famous Greek linguist Georgios Babiniotis also posited that it may have derived from a name used for military camps in Asia Minor.

Rembetis refers to a person who embraces the whole lifestyle of rembetiko, also known as a mangas (pronounced [ˈma(ŋ)ɡas]). The rembetis lifestyle included a very particular code: wearing hats and growing mustaches, verbal mannerisms – such as cursing, using short phrases and slang words – and overall having different morals and ethics from mainstream Greek society. Rembetes, (plural of rembetis) were generally lower working class people with often destructive habits, such as drinking, smoking, gambling and drug use. The following song represents the mangas lifestyle. Its use of language is difficult to understand, even today.

Another song called ‘To Pitsirikaki’ is about a young mangas child.

‘A poor young child is lying on the grass, he is sad.

He is dying for a smoke, but has no penny to give.

He has this idea, to sit and wait ‘til someone comes along,

Whoever it might be, then ask them for a smoke.

But, this unlucky child, at the very next corner he runs

Into the policeman, waiting there.

Feigning innocence, he looks at him and says hello.

The kid keeps his cool, asks for a cigarette. ‘

The themes behind rembetiko music

Using several musical instruments that are easy to find and carry – such as baglamas, bouzouki, guitar, tambourine, violin, santur – the rembetes could create rhythm and melody wherever they ended up. The themes of the songs varied but often spoke about poverty, class struggles, life, love, addiction and immigration. War, exile violence, unemployment and death were also sources of inspiration. Although diverse, these themes represent universal subjects that embody human nature, hope and suffering, like ‘Drapetsona’ that talks about poor labor neighborhoods, social injustice and pain.

Rembetiko’s odyssey from prohibition to acceptance

Rembetiko is often referred to as notorious and scandalous, and around 1936 it began to represent a subculture of criminality, drugs, diverse and often anti-establishment political thought and lack of morals. At a later stage, it was censored due to its use of foul language and reference to drugs. Like the blues, it represented an urban culture that was underground and marginalized. Around 1960, after softening the edges, rembetiko transitioned from a coarse subculture to embrace a more liberal political and cultural background that formed the genre’s Renaissance. Eventually, rembetiko earned its acceptance into society and deemed as a form of tradition and philosophy. In the United States, the Greek immigrant societies made records dating as far back as the late 1800s and continue to sing, compose and record rembetika songs today.

Presently, rembetiko continues to be a fundamental part of Greek culture. In many places throughout Greece and its diaspora – from small taverns and smoky bars to village festivals and international concert halls – the tradition of rembetiko continues and serves as an event where people can enjoy music, dance, eat and drink and express their passions and woes. Many of the songs are recorded in different versions by contemporary artists, and it remains a topic of interest and study both at home and abroad. Discs are best-selling and rembetiko is still alive, embraced by many individuals, no matter their age, location or occupation.