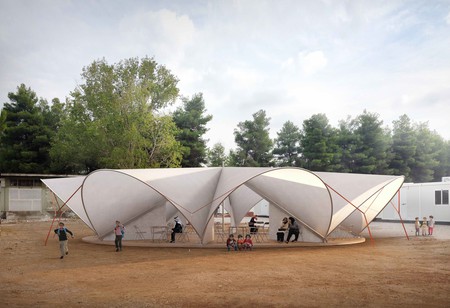 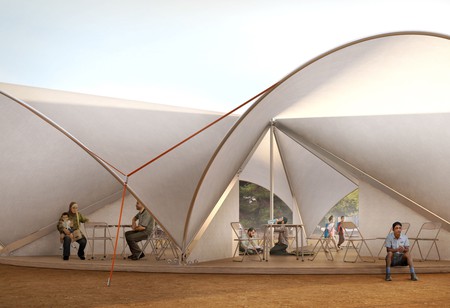 The Maidan Tent, which in Arabic means “square,” would function as a public indoor space for those currently living in refugee camps in Greece. The design by architects Bonaventura Visconti di Modrone and Leo Bettini Oberkalmsteiner is the “result of the strong will and determination of a group of people [who want] to provide an important contribution [and improve the] living conditions of refugees,” says the press release.

The designers felt an urgency to help with the Syrian refugee crisis, and made several visits to a Refugee camp in Ritsona, Greece in the spring of 2016. It was there they witnessed first-hand the psychological devastation of war and displacement. They were struck by the camp’s “total lack of daily activities and blatant inaction of the people,” and their “disorientation, uncertainty, and fear.” But the designers also realized how design could play a role in helping to alleviate this distress, especially in the form of a temporary community space. 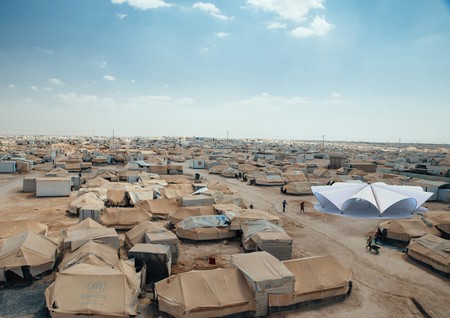 The tent’s design encourages socialization and shared activities – a place to foster community, a place to form new friendships, and a place of reprieve. The open-plan design is a “possible solution” to the alienation and isolation that occurs during traumatic migration. As a moveable structure integrated within the camp, it is also equipped for all weather conditions.

“We have chosen this camp amongst many others present in the country for various reasons: its smaller dimension, would have allowed all the residents to benefit from the tent, by taking turns and without the risk of any strifes (also because at the time, as at present, the funds raised did not allow to produce more than one),” says Visconti di Modrone.

Working with the patronage of the International Organization for Migration (IMO), the UN migration agency, and other like-minded professionals and donors to the project, they hope to have the Maidan Tent operating by summer 2017.

To help donate to the project here.