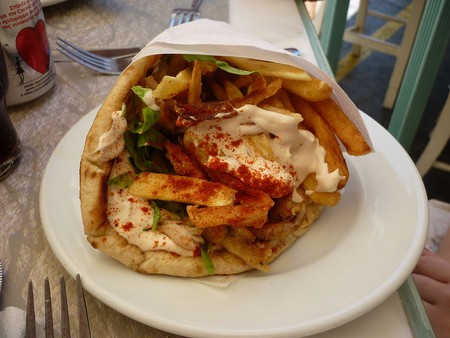 Widely known for its tasty cuisine and healthy Mediterranean diet, Greece also has its own street food. If you live in or have visited the country, you most likely have tasted the famous pita souvlaki or pita gyro once. These ‘fast food’ dishes are a staple of modern Greek cuisine, along with feta cheese, ouzo, and tzatziki. But who can actually explain the difference between a souvlaki and gyro?

Before diving into the difference between a souvlaki and gyro, one thing needs to be clarified. If you are ordering a gyro, you should call it YEE-ros. Say it again, yee-ros. Okay, now onto the ‘hard’ stuff.

The confusion between a gyro and souvlaki comes from the fact that in everyday language, souvlaki is used as a replacement term for gyro, due to their resemblance. However, simply put, gyros (literally meaning turn) are recognizable as cones of meat, cooked on a vertically rotating skewer.

Souvlaki is a take on the Greek word souvla (which means spit), and the origins of souvlaki date back to ancient Greece when people used to eat meat and bread the way pita souvlaki is served today. The dish was called kandaulos.

Even during the Byzantine era, references about street vendors selling souvlakia with pita bread in Constantinople/Istanbul have been found.

Flash forward to modern times when the first souvlaki shops in Greece appeared in 1951 in Livadia, where souvlaki was cooked on a stick and gyros on a rotating skewer. The meat (either pork, chicken, or lamb) was served on a skewer and was meant to be eaten on the spot, in hand, in a pita bread with sauce and a garnish or on a plate, usually with fried potatoes.

The souvlaki pita, therefore, is made with souvlaki meat, which is then dressed with tzatziki, garnished with tomatoes and onion, and served on grilled pita. Of course, other garnishes and sauces are available but are considered quite unusual.

The gyro pita is the same; however, the meat is replaced by gyro meat, consisting of beef, pork, chicken, veal or lamb, or even a mixture, which has been sliced off from the gyros cones. And now you know the difference between a souvlaki and gyro.