Discovery Of Shackled Skeletons From Ancient Greece Intrigues The World 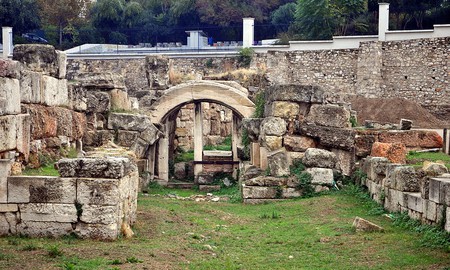 Archeologists recently unearthed at least 80 skeletal remains of what seem to be young men with their wrists bound in iron shackles. Experts argued that these may be soldiers executed after a failed coup in the 7th century BC. A sinister and mysterious discovery happening during the construction of the new national library and opera house between Athens and the Piraeus Port.

More than 1500 bodies are buried at the Falyron Delta necropolis, located in the coastal outskirts of Athens. Research points out that the majority of the graves there belong to average ancient citizens of Athens, unlike the downtown Kerameikos cemetery where the majority of the occupants were nobility or affluent ancient Greeks.

The interesting fact about these 80 recently unearthed skeletons, is that they seem to be young soldiers in good physical condition, all executed in the same manner but buried with respect. Indeed, the bodies were neatly lined in rows, their hands bound in iron shackles above their heads.

The specialists believe this is proof that these were not in fact slaves or criminals, but probably soldiers.

The burial site dates back to between the 8th and 5th century BC, a period of great turmoil in Athens, when the rich and the noble were fighting for power. A leading theory points to the Cylonian Affair, one of the earliest reliably dated historic events in Greece. In 632 BC former Olympic champion and nobleman Cylon, with the help of his father-in-law the tyrant of Megara, planned a rebellion against the elite in power in Athens. The coup failed and, even though Cylon managed to escape, his supporters were captured and detained.

According to historian Plutarch, the rulers of the city tricked the supporters into surrendering, which led to a massive execution – apparently a rather violent one at that.

Dr. Stella Chryssoulaki, head of excavations at the site, told Reuters that she hopes the DNA tests and anthropologists research will confirm how these young men died. The cemetery is host to over 1500 bodies, not all of them soldiers. Burial methods, such as children resting in clay pots, or adults buried in stone coffins, suggest that the majority of the people buried at the site were regular citizens of Athens.

The opportunity to study this newfound site is simultaneously thrilling and challenging for archeologists, as the excavation site is located in a 170,000 square meter park, right next to the construction site of the modern library and opera house, funded by the tycoon-owned Stavros Niarchos philanthropic foundation. Understandably, Chryssoulaki hopes to see an addition to this new project and so is petitioning for the construction of a museum on site, showcasing the daily lives of these ancient Athenians.