A holiday haven for many Europeans, Corfu is more closely associated with the sun and sea than it is arts and culture. However, away from the beaches is a veritable wealth of cultural venues that tell the story of this tiny island, including its traditions, food and typical clothing. Here are ten of the best exhibition spaces in Corfu. 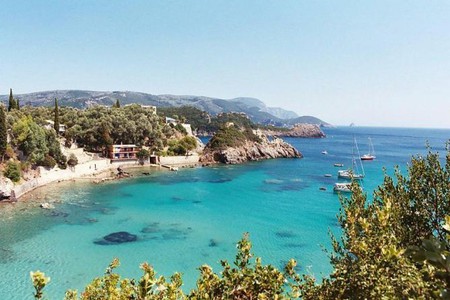 Art Gallery, School
Facebook
Email
Twitter
Pinterest
Copy link
Share
Map View
Inside the magnificent opulence of the Palace of St. Michael and St. George is a gallery that contains a large and impressive collection of art. Pieces inside the Municipal Art Gallery are mostly from Corfiot painters, but there are also some works from the 15th century Byzantine period. Artworks from Prossalendis and the Cretan Damaskina, who are of particular interest due to their visible Italian influence and sophistication, form the centerpieces of this gallery.
Open In Google Maps
Corfu, 491 00, Greece
+302661048690
Visit Website
Give us feedback 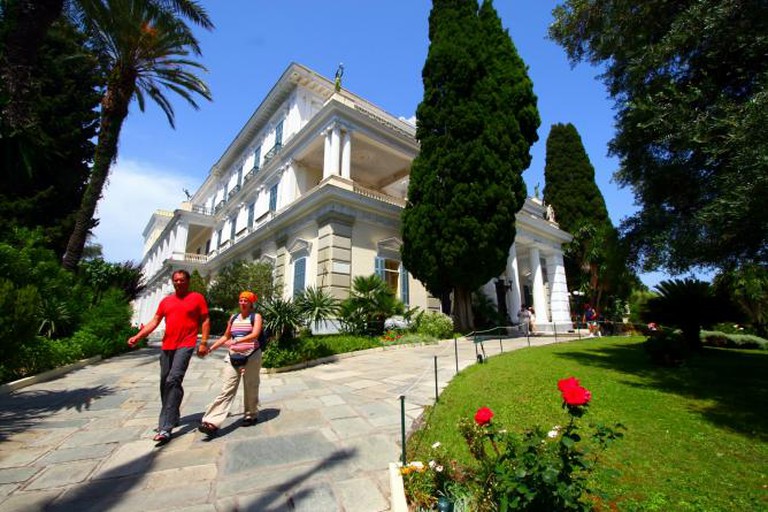 Achilleon Palace | © Marie Therese Magnan/Flickr
Built for Empress Elisabeth of Austria between 1890 and 1892, this magnificent stately home has a fantastical and enthralling history that envelopes two great leaders of European history. A grand building of neo-classical design, the Achilleion Palace was purchased by Kaiser Wilhelm II in 1907 as a place of relaxation, but he never truly got to enjoy all its splendor due to the outbreak of the First World War. Pillaged during the years of conflict, it has now been restored to its former glories, housing many statues, paintings and personal items from its previous owners and is surrounded by marvelously well-kept gardens.
Open In Google Maps
Achilleio, 490 84, Greece
+302661056210
Visit Website
Give us feedback

The Folkloric Museum of Central Corfu

Museum
Facebook
Email
Twitter
Pinterest
Copy link
Share
Map View
Established in 1982 by the Historical and Folkloric society of Corfu, and housed in the small village of Sinadres, the whole museum is a reconstruction of a traditional middle-class village home from the 19th century. With original decoration and furnishings alongside donated historical texts, this is a real window into life of a past generation on the island. The Folkloric Museum of Central Corfu also has traditional holiday outfits and instruments, farming tools, ceramics and a cobbler’s workbench, along with a children’s corner offering a puppet show and various educational tools to encourage public participation.
Open In Google Maps
Sinarades, 490 84, Greece
Give us feedback

Located in in the small village of Kynopiastes, and housed in a perfectly preserved oil mill from the early part of the 20th century, the Olive Museum pays homage to the fruit that is famously linked with the region. Displaying a rich collection of equipment used for the extraction, collection and elaboration of oil, this museum showcases the tools and resources which brought wealth and affluence to Corfu. This may not be the typical museum experience, but it does offer a fantastic insight into a trade that built the economic foundations of Corfu. 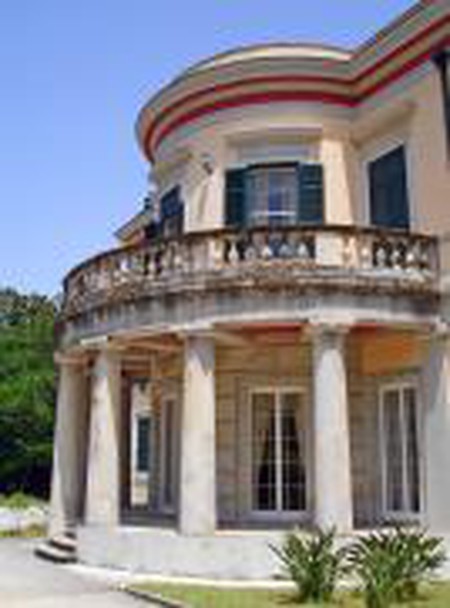 Museum, Ruins
Facebook
Email
Twitter
Pinterest
Copy link
Share
Map View
Built under British colonial rule, this magnificent neo-classical structure resides in the outer suburbs of Corfu. An estate of around 260 acres, it boasts impressive leafy gardens that once belonged to the Ionian academy. Delve further into the grounds and there are also ancient baths and ruins to explore and discover. Inside the palace itself is the Mon Repo-Paleopolis Museum, which houses authentic regency furniture and some of the first excavated artifacts found on the island under British rule, as well as artworks from the Byzantine period, lithographs and historical documents about the palace.
Open In Google Maps
16 Dairpfela, Kerkira, 491 00, Greece
+302661030680
Give us feedback 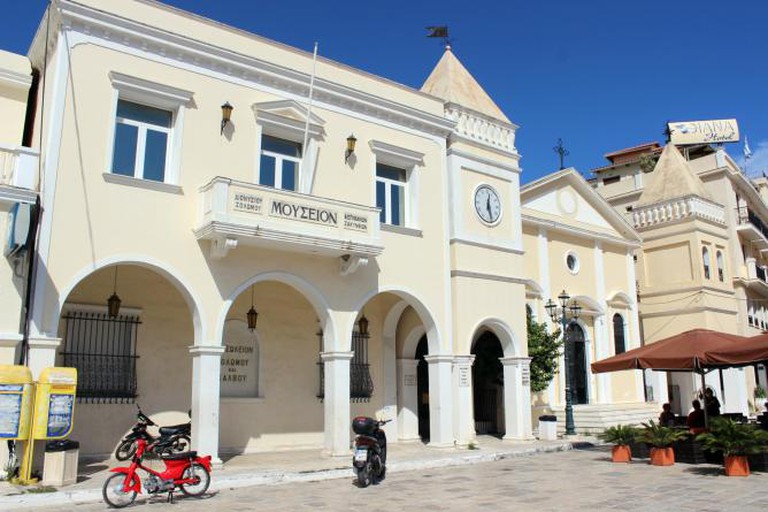 Museum of Dionysios Solomos | © Maesi64/WikiCommons
Based in the house where Greece’s national poet, Dionysios Solomos, lived for many years of his life (1798-1857), this collection of memorabilia includes his writing desk, manuscripts, personal photographs and an extensive library. The museum provides an in-depth and intensive look at the man who wrote the Greek national anthem, Hymn for Liberty, with many documents and materials about him collected together under an impressive array of portraits of himself and other great alumni of the Solomos School. A great personality of his time, the museum shows how he affected not only the Greek revolution, but the Italian one as well.
Open In Google Maps
1 Arseniou, Kerkira, 491 00, Greece
+302661030674
Give us feedback

Not necessarily what you would expect to find on a Greek island, this collection of military regalia, religious iconography, uniforms, flags, medals and other items are all sourced from the Serbian troops seeking refuge on the Island of Corfu during the First World War. Explaining and expounding on the link between these two countries and how it came to be that Serbian troops found themselves on the island, The Serbian Museum provides a fascinating insight into a little-known aspect of the war and how these two nations were intrinsically involved. 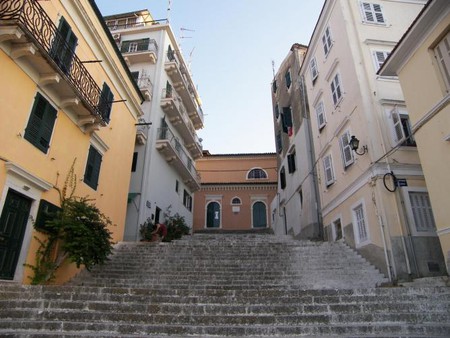 The Antivouniotissa Museum is nestled inside the awe-inspiring setting of a 15th century church dedicated to the Holy Virgin Our Lady of Antivouniotissa, and is a rather complete example of the Heptanesian basilica architectural style. The museum part of the building first opened in 1984 but since then has undergone major restoration works in 1994 and 1999-2000, making it an up-to-date exhibition of artistic representations of religious iconography and heirlooms of the Byzantine period. This ultra modern set-up complements the stunning historical surroundings with style and grace, and makes the museum a must-see for anyone in the area.

Museum
Facebook
Email
Twitter
Pinterest
Copy link
Share
Map View
The Banknote Museum of Greece is the only one of its kind in Greece, and one of only a few in the world. Holding a comprehensive collection of bank notes from different countries and different periods, it also shows the process of how the banknotes of a modern nation are produced. With printing inks and old note presses, along with some of the oldest currency to exist – including Chinese banknotes from around 1300 BC – this museum shows the historical basis of what modern nations are built on.
Open In Google Maps
32 Nikiforou Theotoki, Kerkira, 491 00, Greece
+302661041552
Visit Website
Give us feedback

Museum
Facebook
Email
Twitter
Pinterest
Copy link
Share
Map View
A private collection of traditional costumes from all over Greece, including the mainland and other islands, assembled over many years, this museum shows how clothing in the region has changed over time. Opening in 2008 and privately funded, the Museum of Traditional Costumes splits the costumes into regions, and provides a single room for each area of the country where you can see the traditional attire of men, women and children throughout the ages. There is also a small section about traditional folk music from various regions of Greece and how this has impacted Greek living.
Open In Google Maps
Corfu, Greece
Give us feedback
Give us feedback