Loukanikos on Riga Palamidou St., Psyrri. Work by Billy Gee, Alex Martinez & N_Grams | © Dimitris Kamaras/Flickr
In a country where public space belongs to no one, creative street artists have taken their art to the streets of Athens, covering the blank, concrete buildings with their visions. According to The New York Times, the city is a ‘contemporary mecca for street art in Europe,’ and it’s enjoying a new burst of creative energy thanks to the euro crisis. Discover some of the most vibrant street art in the Greek capital.

The colorful artwork on the walls of ILPAP, the bus depot near the Kerameikos archaeological area, was made by Brazilian street artists Os Gemeos. Their style is very distinctive and involves yellow-skinned characters. 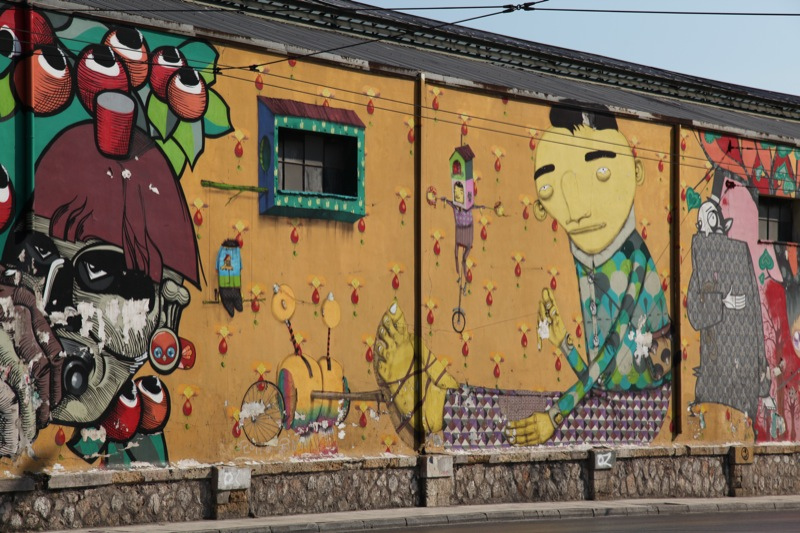 Another iconic piece of street art you can find in the main square in Psyrri is from Alexandros Vasmoulakis, who mixes collage, photography, paint, and digital media. 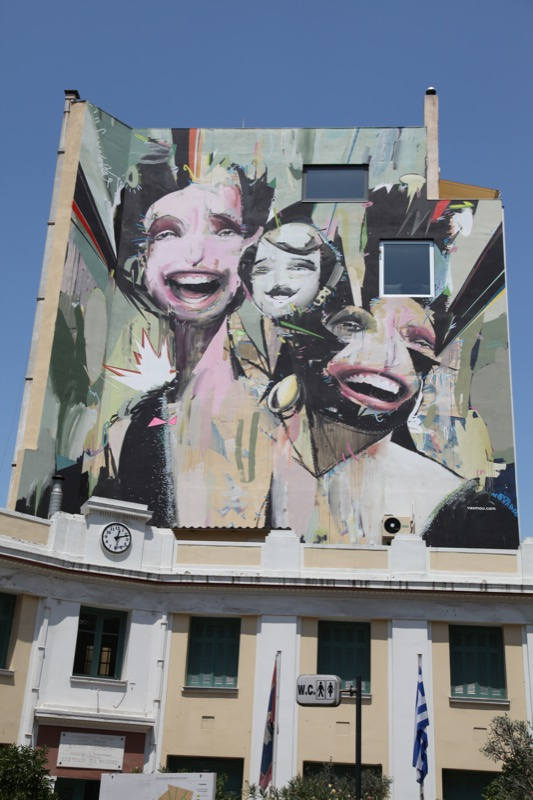 Woozy, aka Vaggelis Hoursoglou, along with Vasmoulakis, is a pioneer of street art in Athens. His particular style can be found not only throughout the city but also abroad in London and even China. 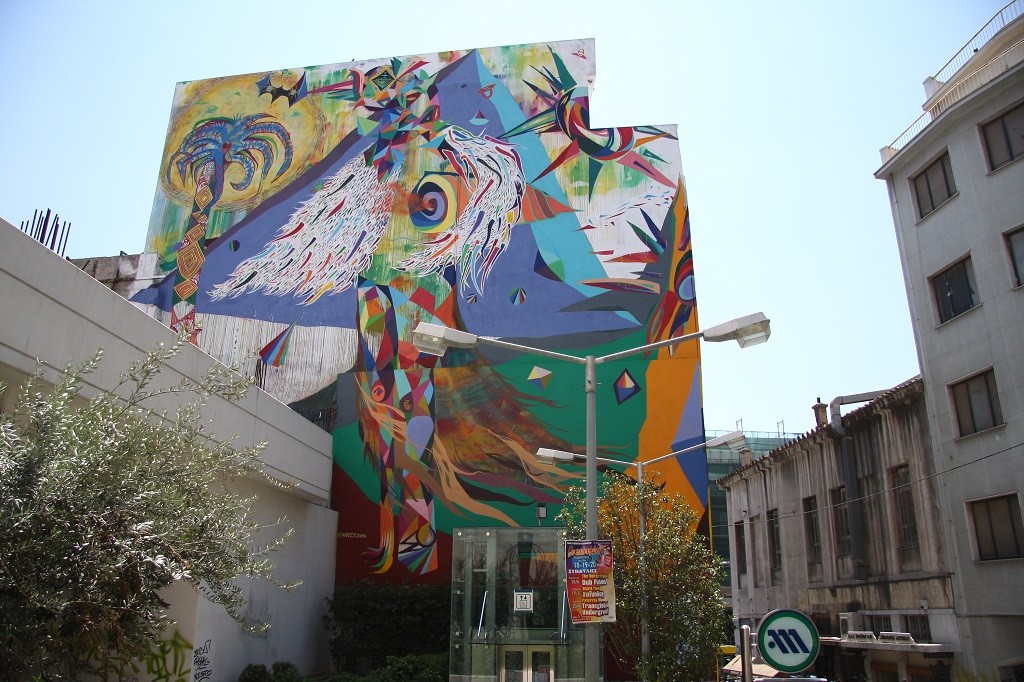 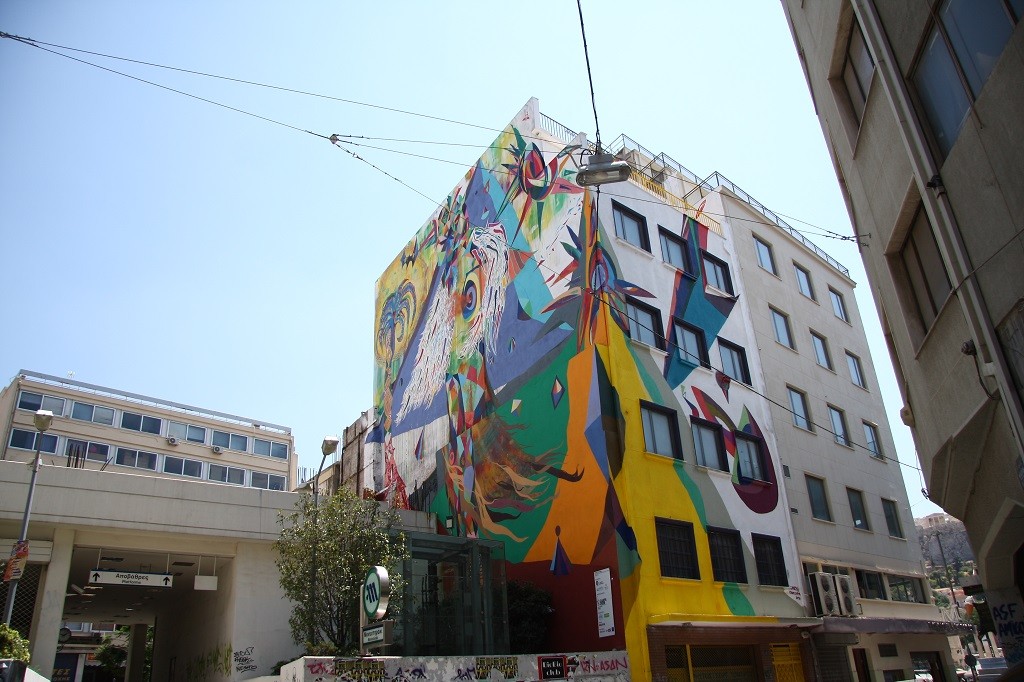 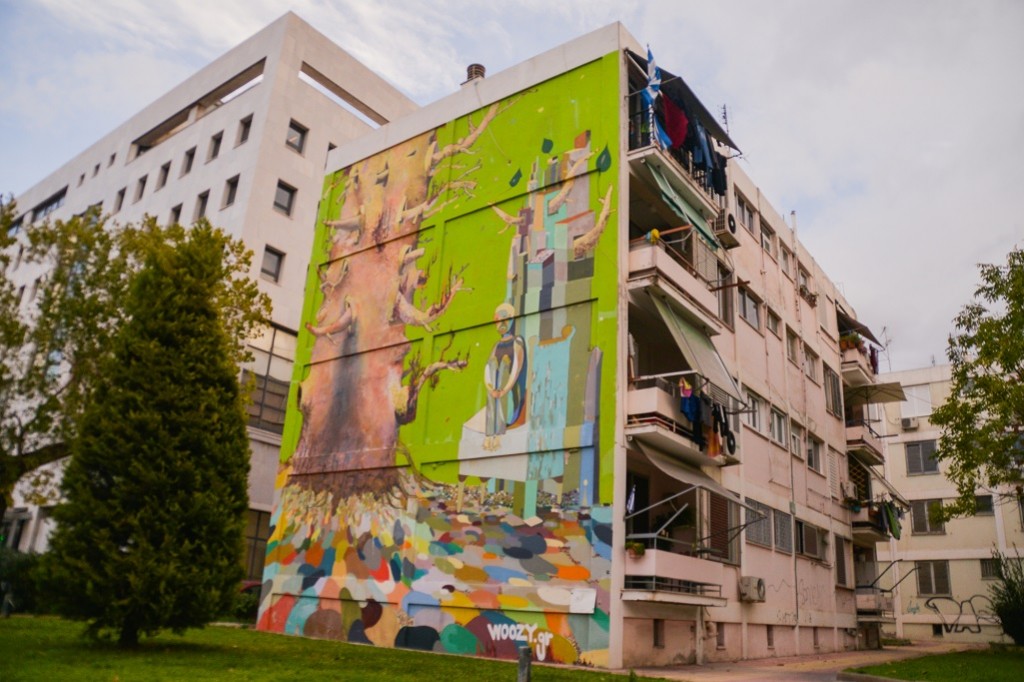 Another artist with a unique, minimalist style is Kez. You can find some of his work in Athens as well as in Volos and Preveza. 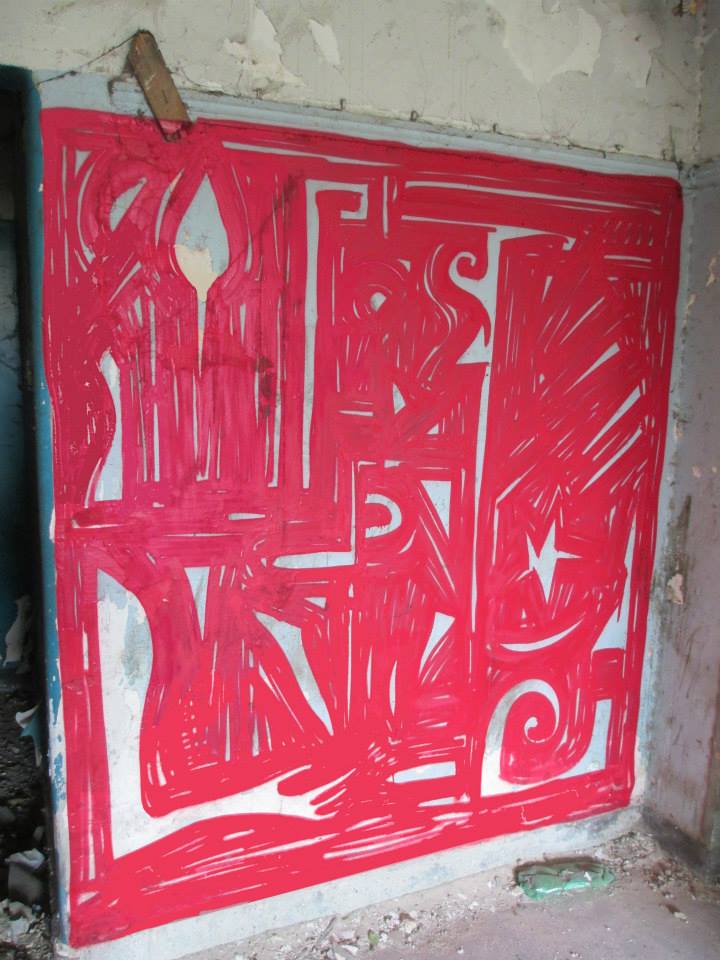 Filling the streets of the city with an iconic, melancholic female figure, Sonke is another local street artist whose work you will encounter virtually everywhere in Athens. 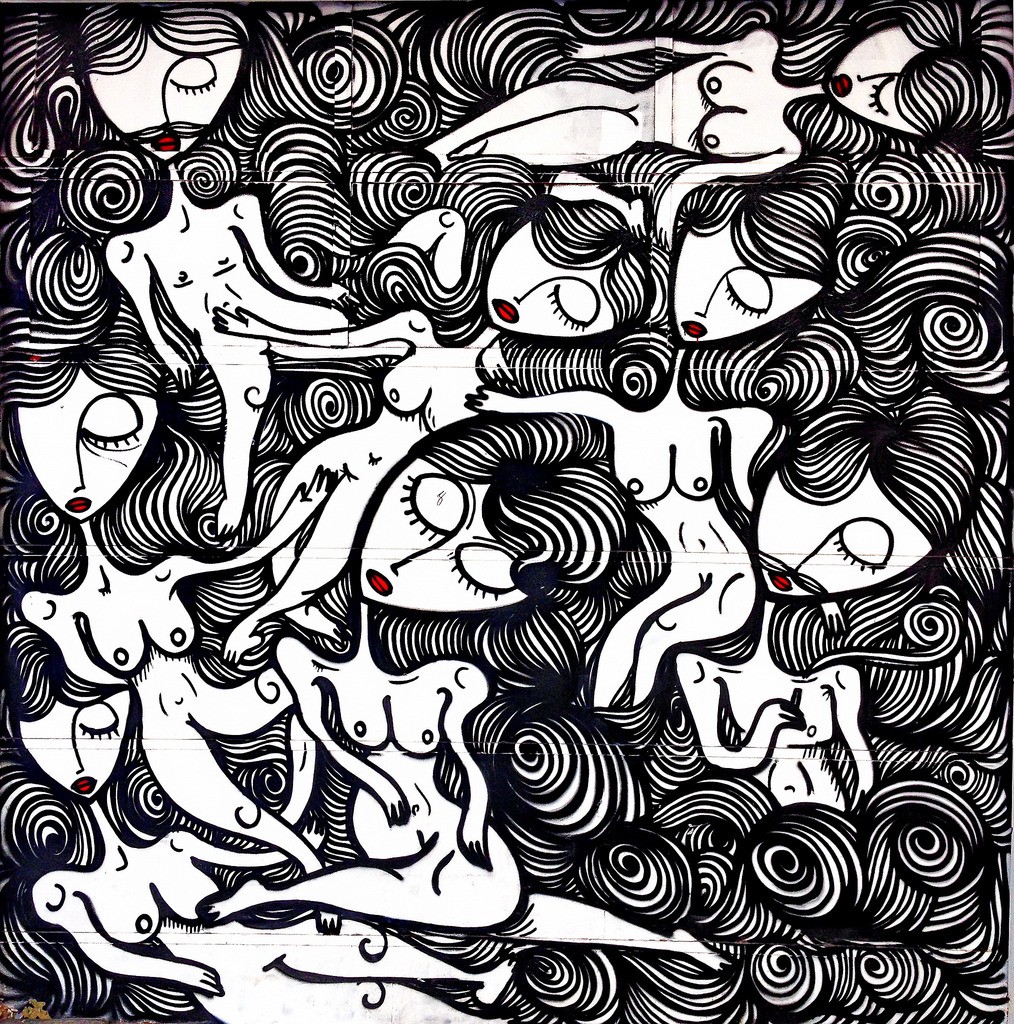 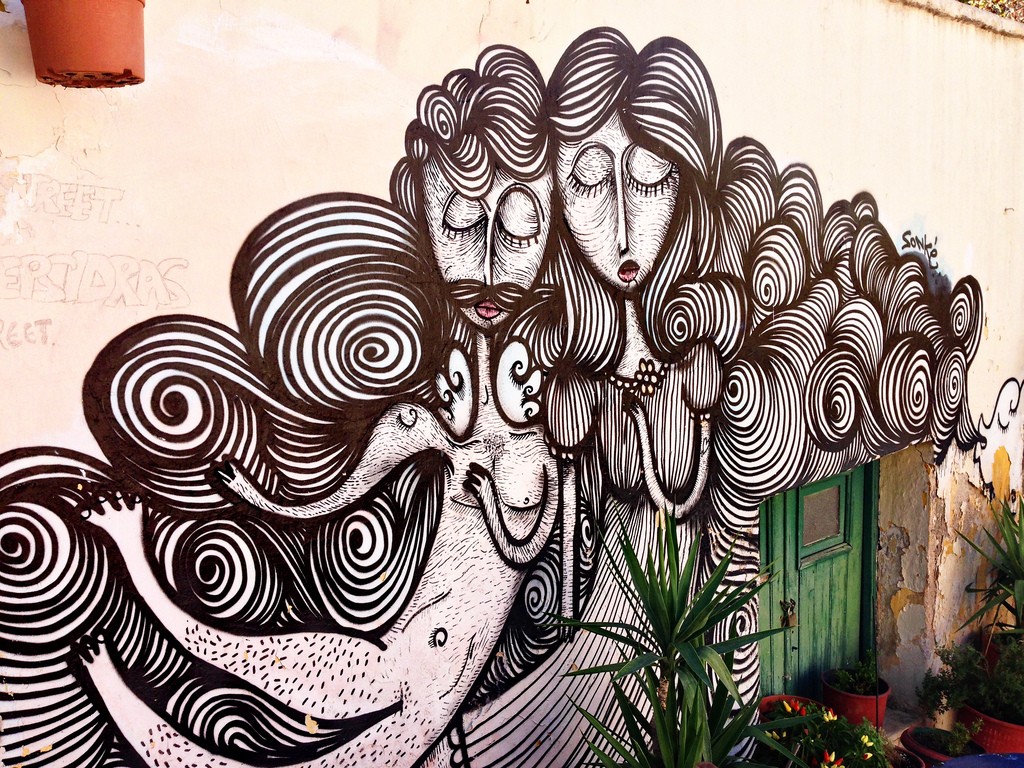 The colorful work below can be found in Exarcheia, one of the most vibrant areas when it comes to street art. 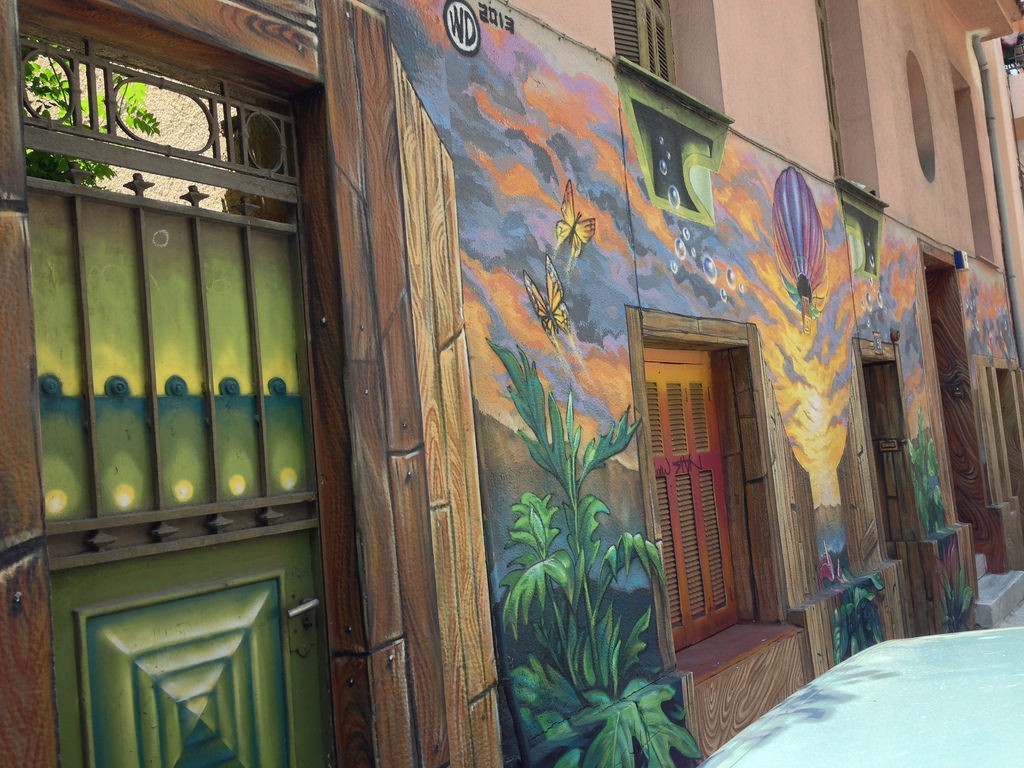 Just like anywhere else, street art is also a means of communication, with graffiti artists using it as a way to express their opinions, whether political, social, or not. The work below was created by Barcelona-based Jupiterfab, known for his social work projects. 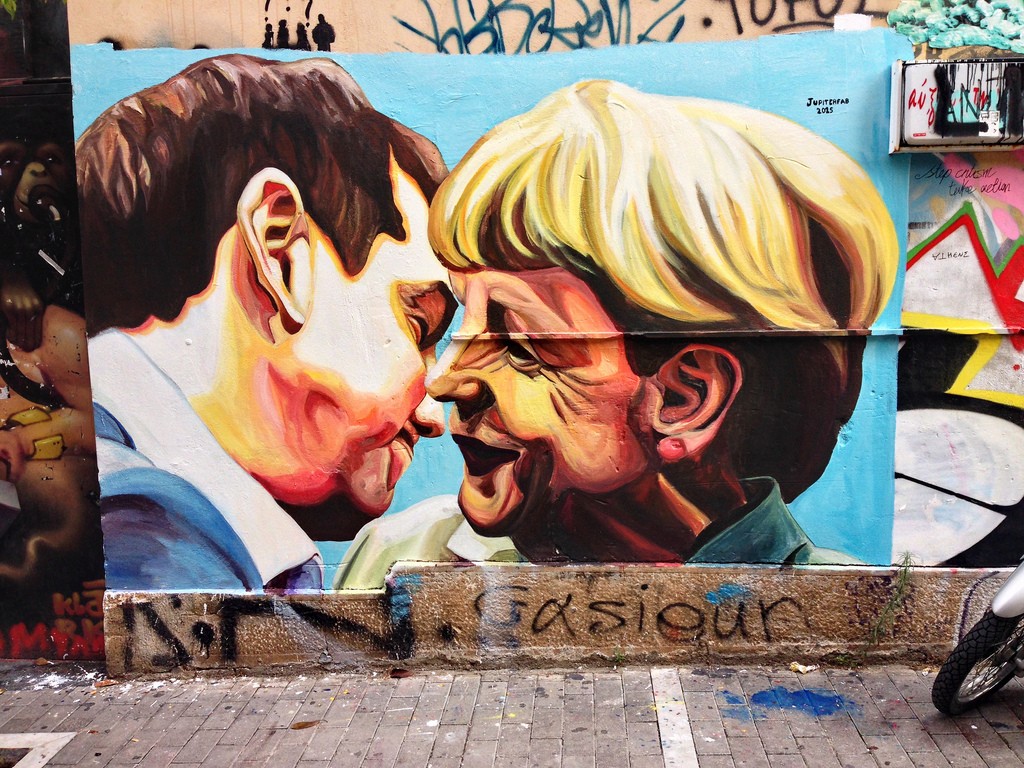 Street art has managed to put colors where the gray and decaying were once visible, as seen below in the mural by WD. 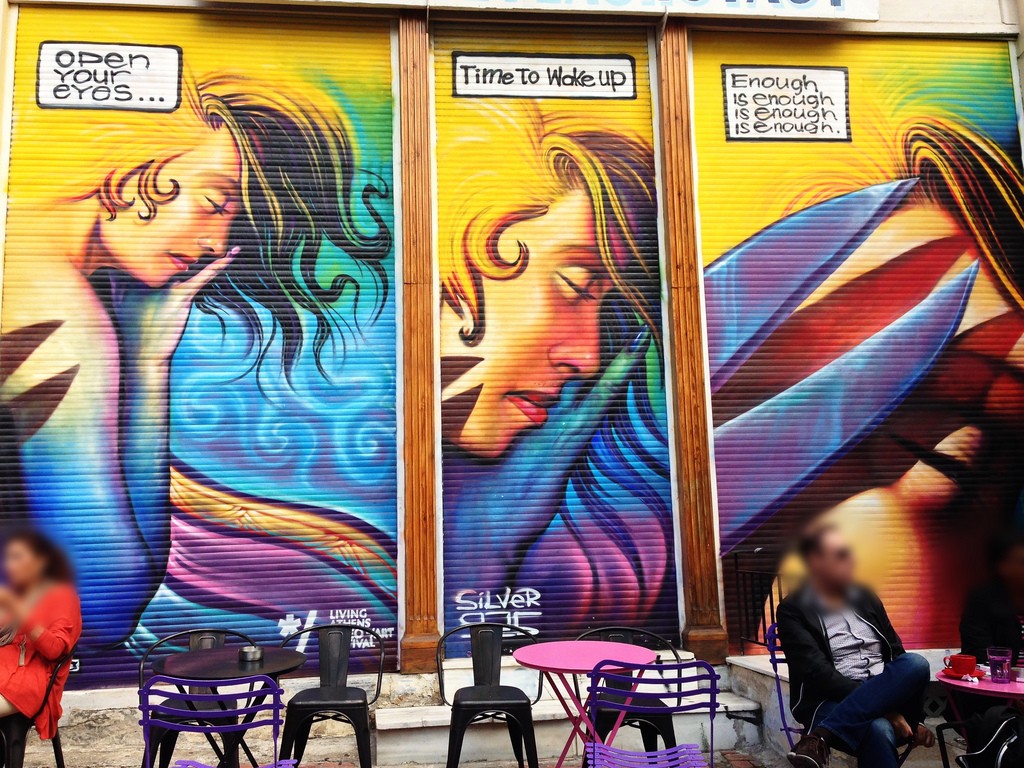 This portrait of a dog is not random. Loukanikos was also known as the Riot Dog as he was present at all the riots that happened in Athens, especially during the onset of the crisis. Loukanikos quickly became the symbol of Greek resistance against the IFM-prompted austerity measures. 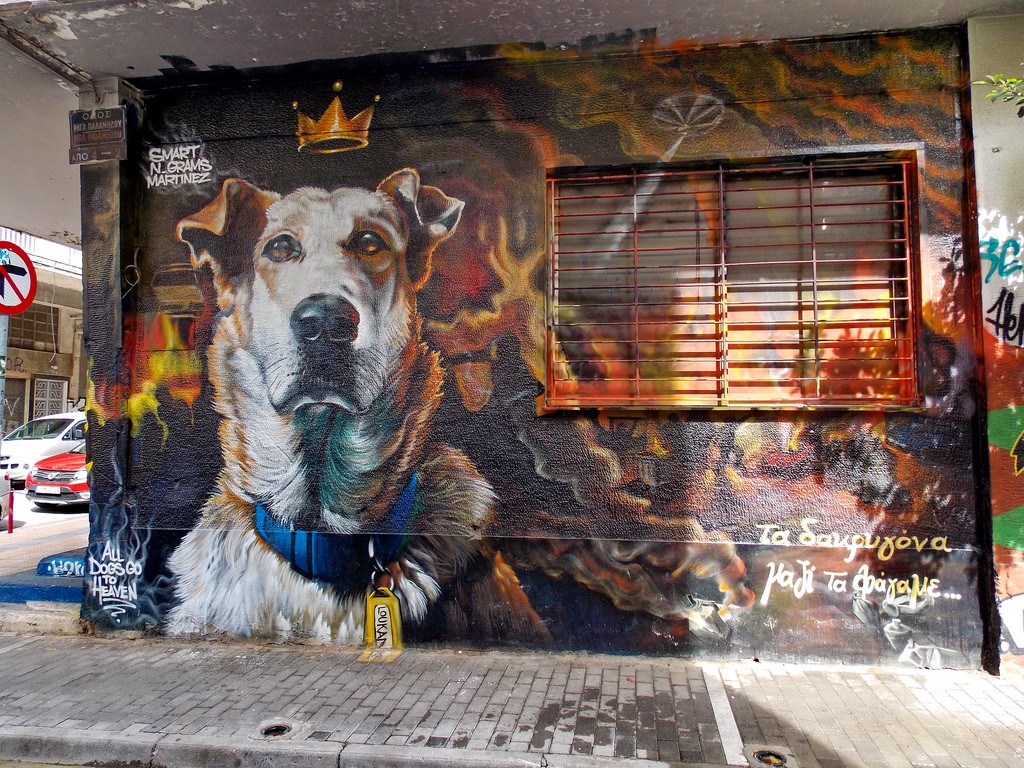 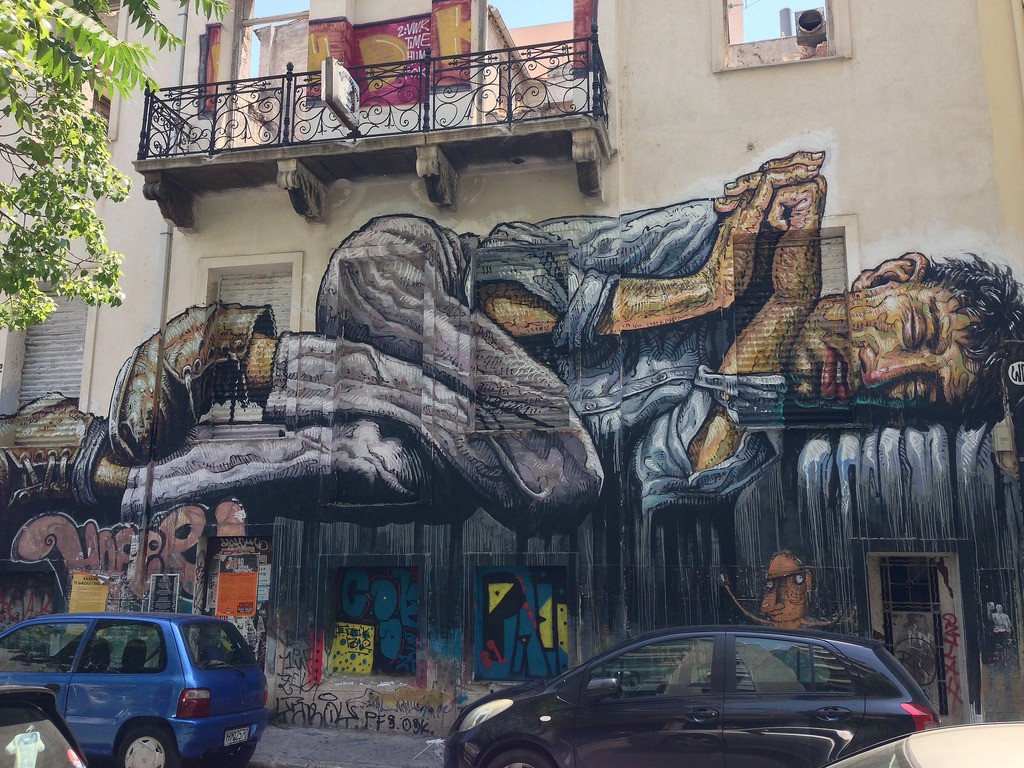 No land for the poor’ by WD. On Emmanouil Mpenaki st., Exarcheia | © Dimitris Kamaras/Flickr

Various organizations have set up Street Art Tours around the central neighborhoods, namely Metarxourgeio, Psyrri, Gazi, and Exarcheia, where the art form is blooming. 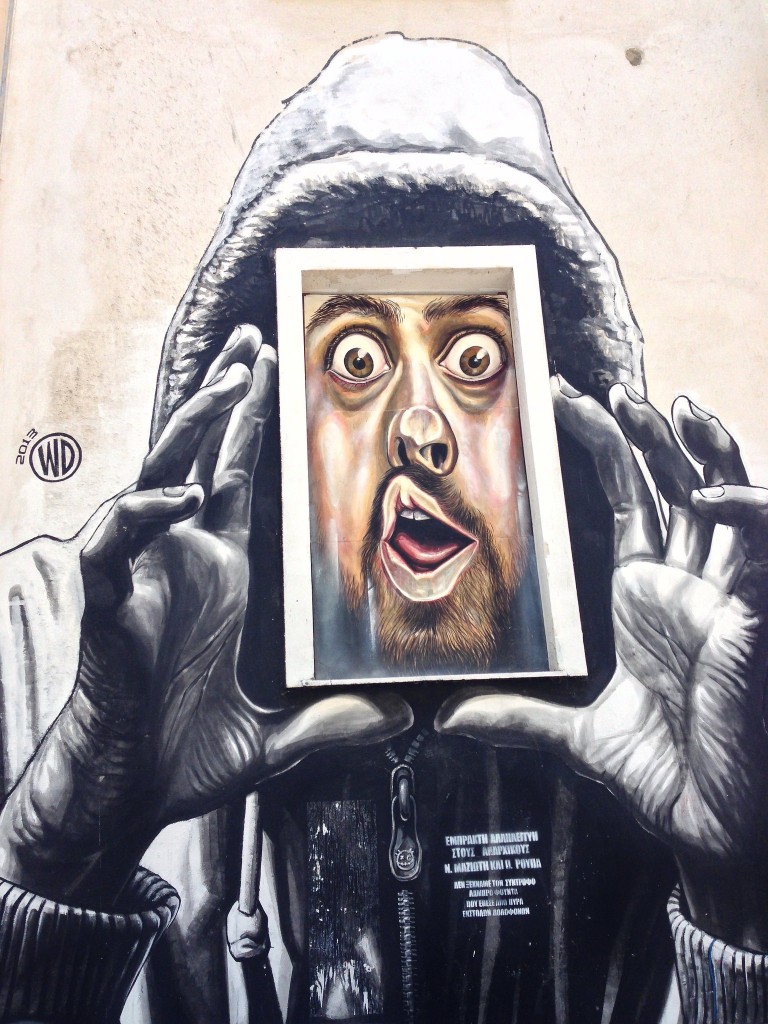 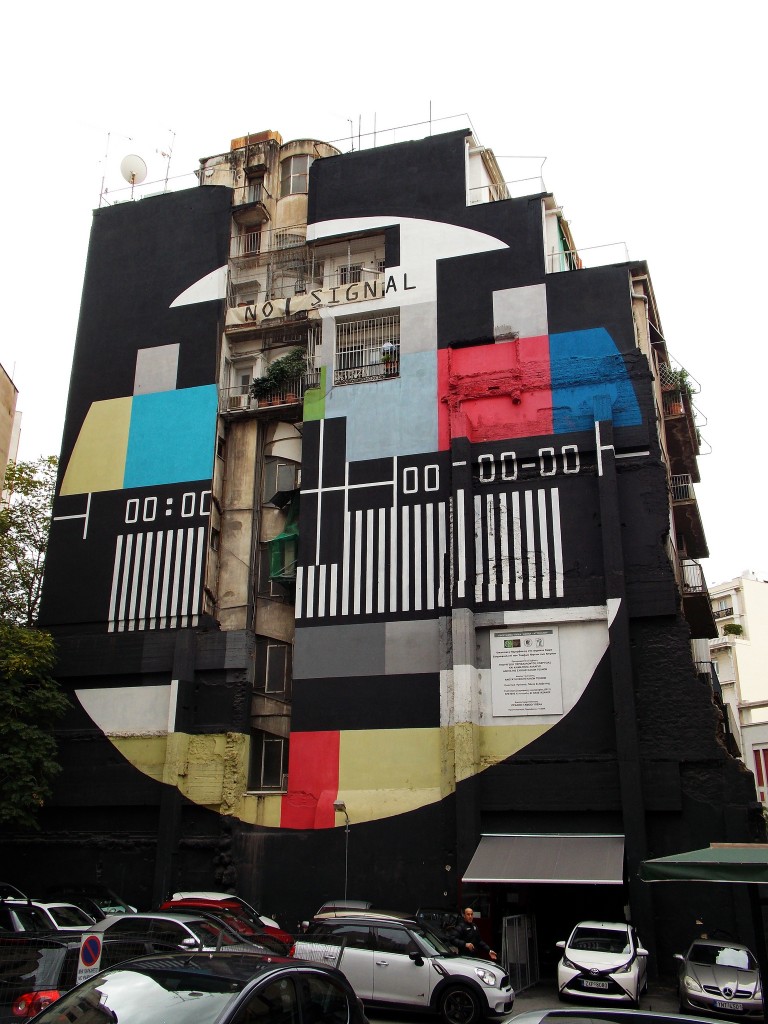 But you don’t need a guided tour to admire the amazing artwork readily available. And just like street artist INO once said in a New York Times interview, ‘if you want to learn about a city, look at its walls.’ 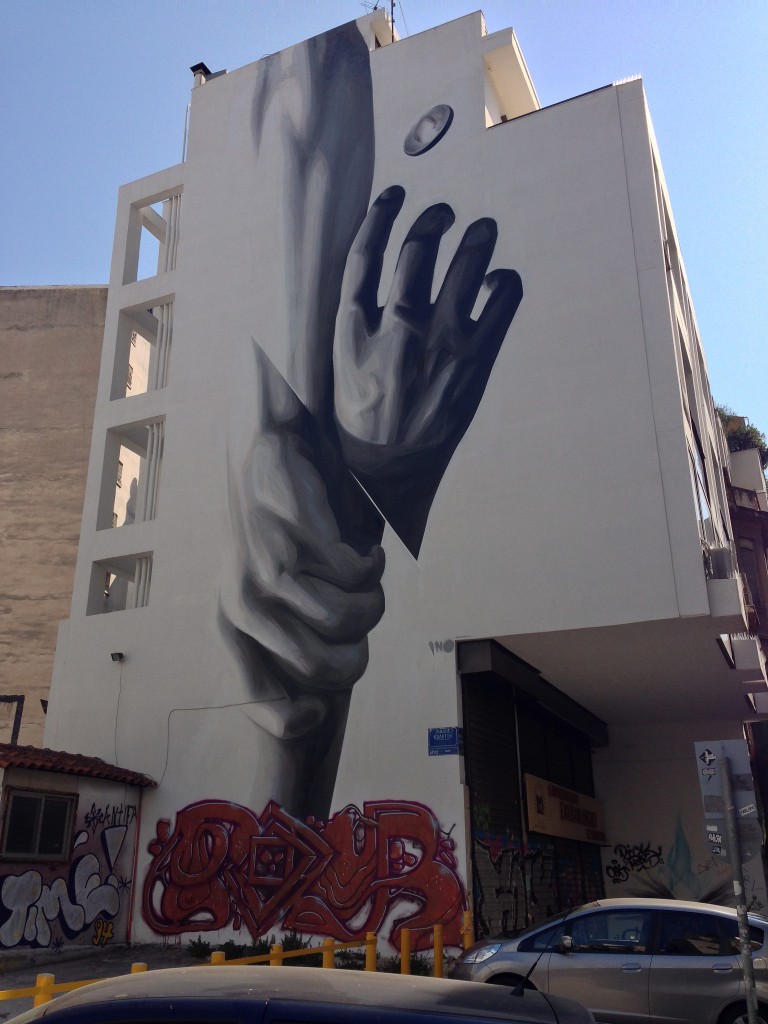 ‘Wake Up’ by INO | © Dimitris Kamaras/Flickr