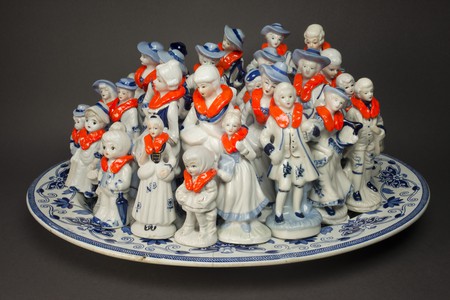 This October, Australian artist and ceramist Penny Byrne will present her first European solo show — “#EuropaEuropa” — at the Michael Reid Gallery in Berlin. We spoke with Penny about how the refugee crisis inspired this collection, ceramics conservation, and evolution of her career.

Congratulations on your first European solo show #EuropaEuropa — can you tell us how the opportunity came to fruition?

Australian gallerist Michael Reid approached me at the Auckland Art Fair back in 2013 and asked if I would like to have a solo show at his gallery in Berlin. The timing wasn’t right for me then, but late last year I got in touch with him again and pitched my idea for “#EuropaEuropa”. He loved it, so we locked in the dates for my first solo show in Europe for October 2017.

Your collection “#EuropaEuropa” centres on the refugee crisis, has this issue always been of interest to you?

I have been interested in the worldwide refugee crisis and the world geopolitics that it ties with for many years. It plays out on our TV screens almost nightly. The mass movement of people has been continuous throughout history; but increasingly countries try to manage, limit and control this movement, with varying degrees of success. Cold-hearted policies are often implemented, with dire consequences for those caught up in their reach. Ultimately the need to seek refuge will continue in spite of how particular countries react. 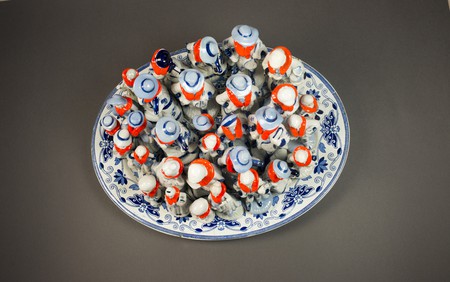 How did the refugee crisis shape your collection?

Seeing images taken by drones of overcrowded boats, the first thing you notice is the bright orange lifejackets. It’s such a lovely colour but has come to symbolise sheer desperation and deceit. Human desperation, people smugglers, unsafe boats, fragile boats.

In this work I am using vintage blue and white figurines juxtaposed against the bright orange of the life jackets. Sitting in fragile ceramic vessels, vulnerable, and full of hope for a better life in Europe. I’ve used any vessel possible – cups, bowls, gravy boats, platters. Just as the migrants use any vessel available, even flimsy blow up dinghies. 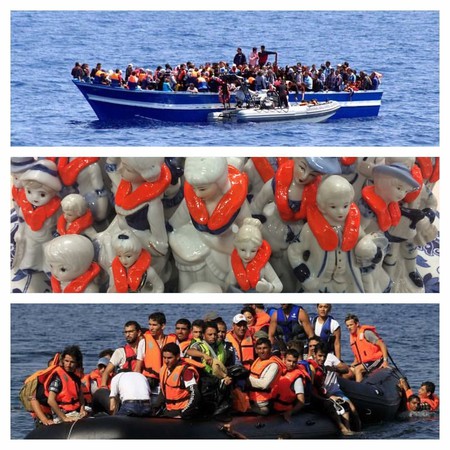 Tell us how you came to acquire the figurines?

I put a call out on social media. I asked my Facebook and Instagram followers if they would like to be part of the “Great Blue and White Figurine Hunt of 2017”.

I’ve had nearly 100 figurines donated by people. They love being part of the process of creating my work — they found them in thrift shops, or even discarded by their previous owners. I’m giving these figurines a new life in my art, the same way people are seeking a new life in Europe. 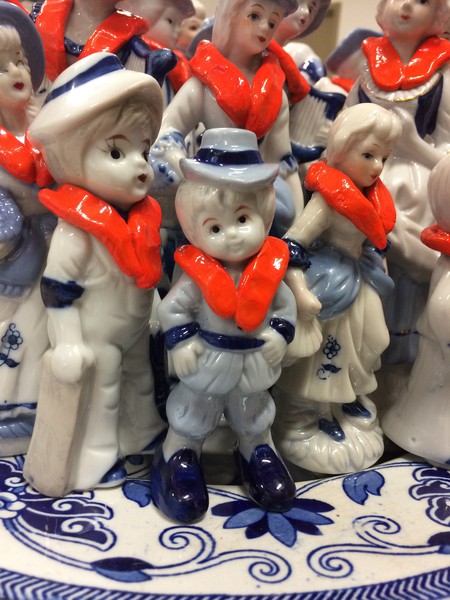 What do you hope people will take away from viewing this exhibition?

I’d like people to think about the ongoing crisis, and to muse on their privileged position. It’s a complex issue with no easy answers, but ultimately how we treat migrants, refugees, and asylum seekers is about our humanity.

Your art has always been politically charged, how do you think your work has evolved over the years?

I’ve never held back from confronting politically difficult issues. I’m privileged to be living in Australia where there is political freedom and free speech. I sometimes feel like it’s a responsibility to talk about political issues simply because I can.

When did you first become interested in ceramics conservation?

I’ve been interested in ceramics since I was a child. My mother had an antique shop for 30 years and I grew up surrounded by antiques. I was drawn to ceramics, studied ceramics at university and then ceramic conservation in the UK.

What’s next for Penny Byrne?

I’m planning my next large-scale sculpture with my collaborators Urban Art Projects. It’s under wraps for the time being, but it’s going to be amazing, if I say so myself!