The Best Boutique Hotels in Dusseldorf 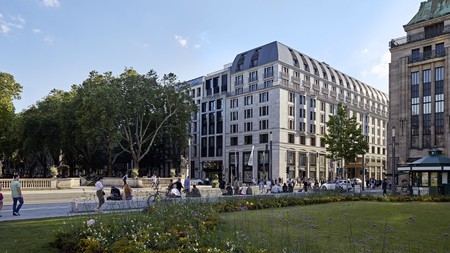 Fashion and culture underpin the German city of Dusseldorf, which dazzles with an array of architecture, nightlife and design. Even the rooms you’ll retreat to at the end of a day’s exploring are designed to impress. From star-studded spaces overlooking Königsallee, to plush suites dominating the skyline above Le Quartier Central, here’s our list of the top boutique hotels in Dusseldorf, all bookable on Culture Trip. 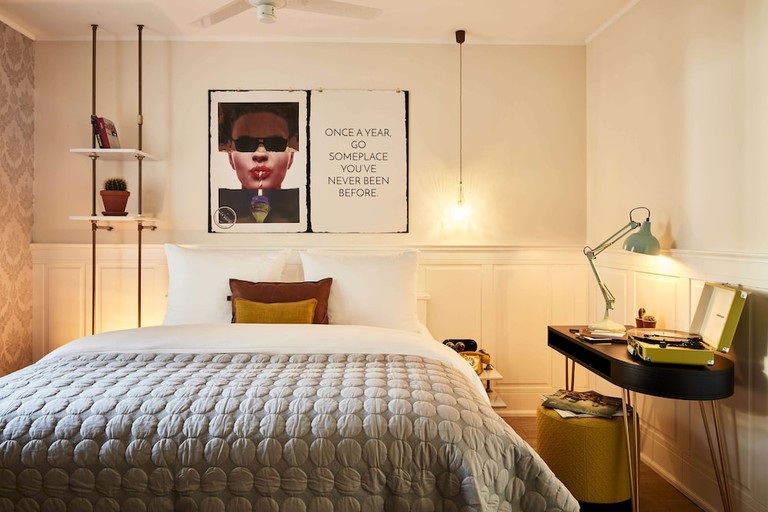 Wake up to the smell of fresh bread and coffee at Max Brown Midtown, which is located in the Japanese Quarter. If you can drag yourself out of the cosy interior, you’ll find a little slice of Tokyo waiting outside, plus the Königsallee shopping boulevard, and the restaurants, bars and clubs of the Altstadt (old town). Galleries K20 Kunstsammlung, Kunsthalle, Kunstpalast and NRW-Forum are also all within roaming distance. 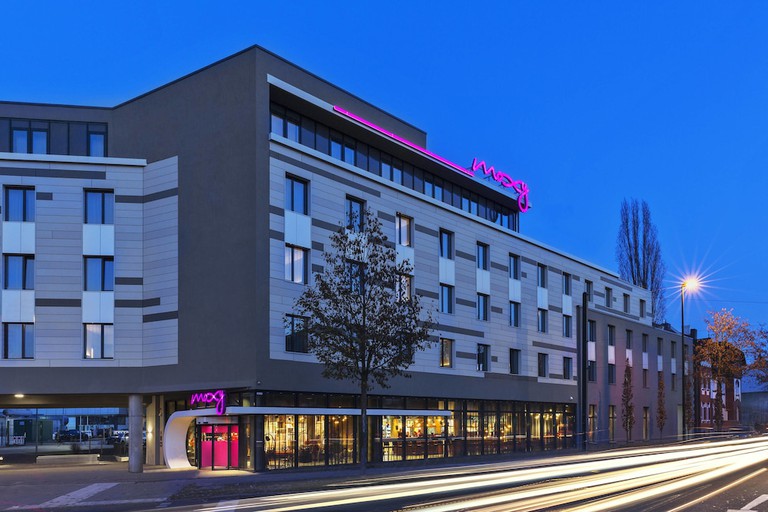 Chic industrial common spaces may be your first impression upon arrival at Moxy Dusseldorf South, but it’s the hotel’s indulgent rooms that make a lasting impression with high thread count sheets, bath amenities and ambient lighting. This stylish hotel is just a couple of minutes by car or train from Dusseldorf’s city centre. Venture 10 minutes in the opposite direction to find the striking Schloss Benrath, a pink baroque palace. 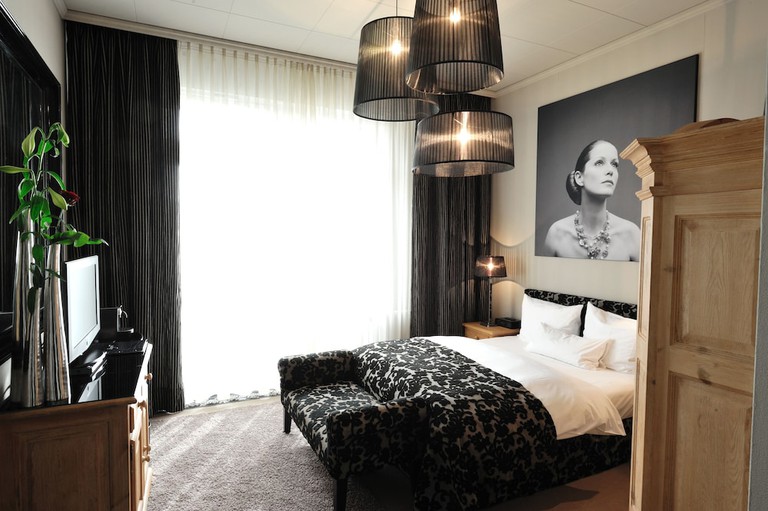 A favourite amongst artists and actors, Stage47 is full of character, with each of its rooms named after the stars that performed there. Spread out on a queen-size bed, enjoy coffee from the in-room Nespresso machine and get ready to explore everything Dusseldorf has to offer – the main train station and Königsallee shopping are just metres away. Next door, you’ll find the Savoy Theater and Atelier Kino Theater where you can unwind with a show after a day exploring.

Contemporary, chic, and central to the city’s sights, Hotel Dusseldorf Mitte has everything you might need spread across its 92 rooms. Inside you’ll find a luxurious lobby bar, a sun terrace to catch some rays, and a gym. Explore the city with ease on a hotel bike rental. Königsallee is located around the corner. 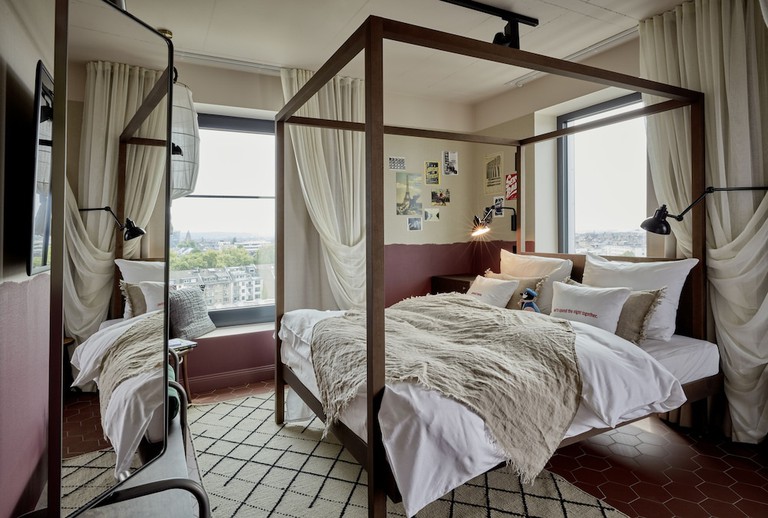 This hotel features high-end design that effortlessly combines German engineering with French artistic flair. Here, you can admire spectacular views of Dusseldorf from the chic Le Quartier Central. Recline in your four-poster bed amid the warm hues of your French chambre and watch the city go by, before heading out to see it all close up – whether it’s by hired bike, Mini car, or in jogging gear. Don’t forget to pick up a pastry from the ground floor cafe on your way out. 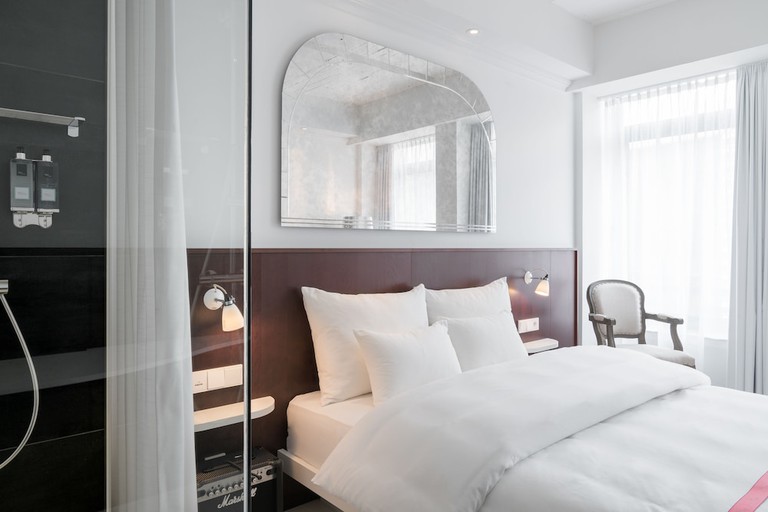 Step into a glamorous world of monochrome decor and playful high-fashion. Inspired by the legacy of designer Coco Chanel, there’s nowhere that embodies France’s high-end fashion house more than Ruby Coco. Spoil yourself with rainfall showers, breakfasts served up with barista coffee and a huge bed to lose yourself in – this hotel takes thought and care to the next level. 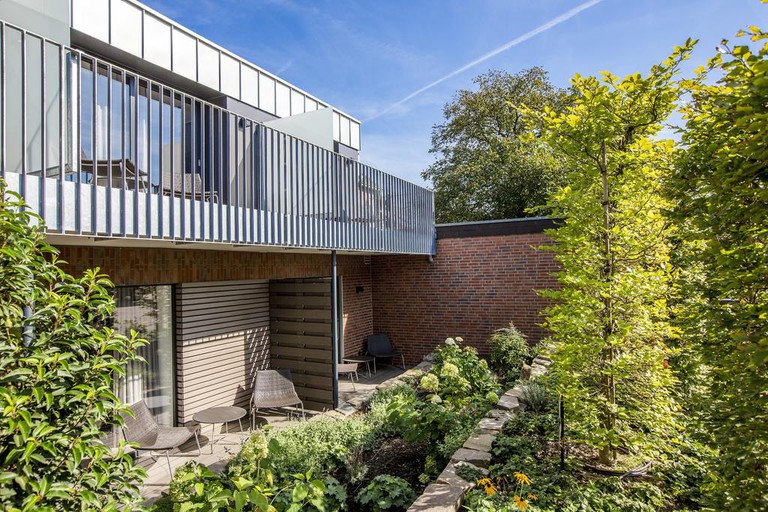 All five plush rooms at Gasthaus Stappen, which is located in Korschenbroich on the outskirts of Dusseldorf, overlook a beautiful garden. The hotel also has a fabulous restaurant that will please even the most discerning of connoisseurs. The menu changes with the seasons and regularly offers themed cuisine, from Italy to Mexico. Everything will be handled for you here, whether it’s airport shuttle service, room service or concierge assistance – you need not worry about a thing. 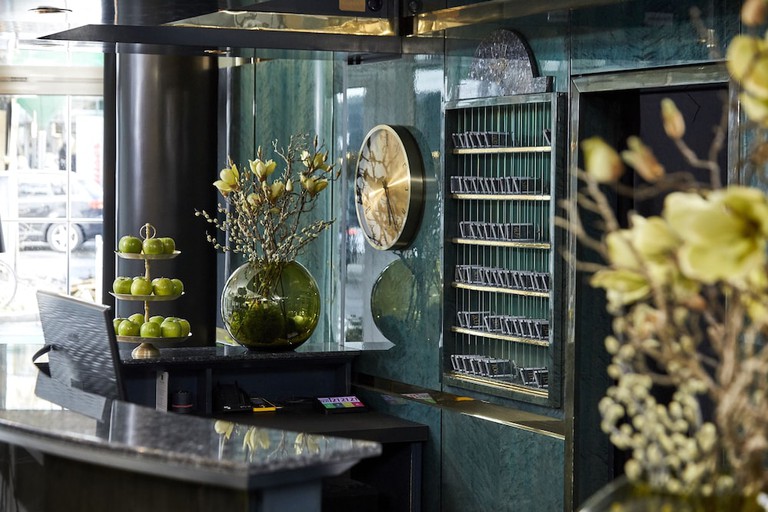 Das Carls is a stylish hotel situated footsteps from the River Rhine in Carlstadt, one of Dusseldorf’s most beautiful districts. Step outside the hotel from Monday to Saturday and you will smell the roses and fine local foods of the city’s favourite fresh produce market, Carlsplatz, which is opposite the hotel. The Heinrich-Heine-Institut cultural centre and Schumannhaus are stone’s throw away. 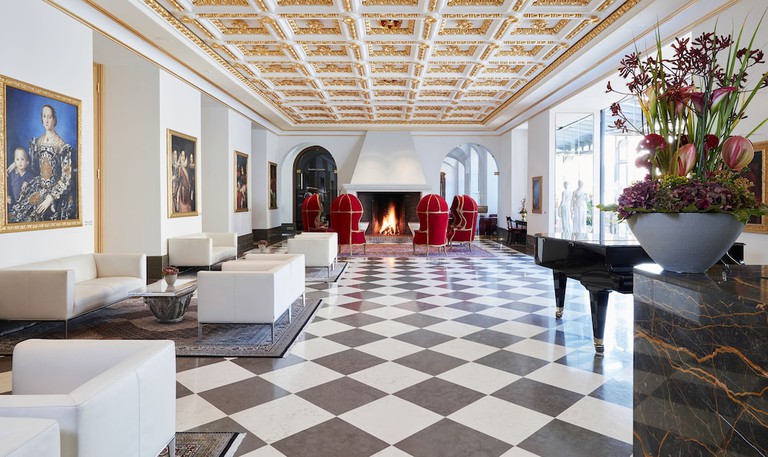 This elegant building, designed by Schinkel, was once a monastery, a college and a government building, before finally being redesigned into one of Dusseldorf’s most unique hotels. Named after the De Medicis, the dukes of Tuscany, the hotel is a treasure trove for art lovers. It houses precious artwork and antiques from the Middle Ages to the modern era. Light-filled rooms range from snug singles to the ornate Elector’s Suite with its carved ceiling and gilded mirrors. Downstairs, enjoy French cuisine at the Brasserie Townhouse. 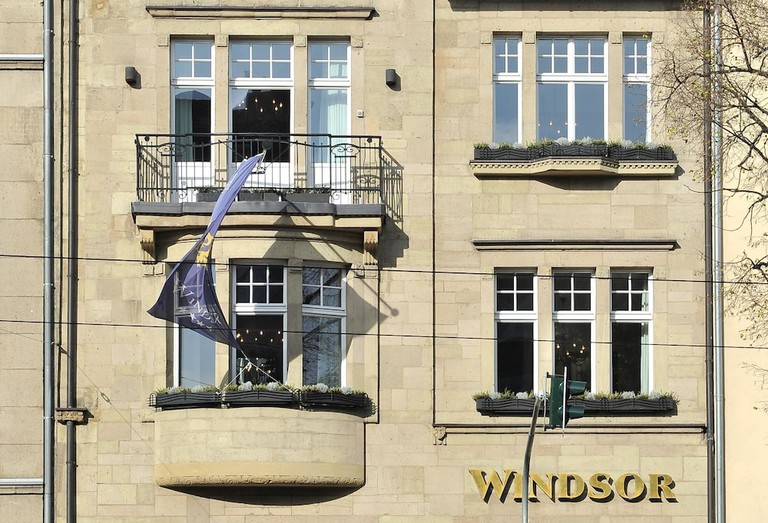 When a 100-year-old mansion is redesigned as a hotel, you can expect a royal stay. Admire the intricate stucco ceilings, winding stairways, antique furniture and art as you step inside. As the hotel has only 18 rooms, they are always in high demand and you can expect to receive personal attention. The hotel sports a classy British style with tartan wallpaper and four-posted beds in the business suites. While there is no restaurant on-site, the Aldstadt restaurants are only a short walk away. 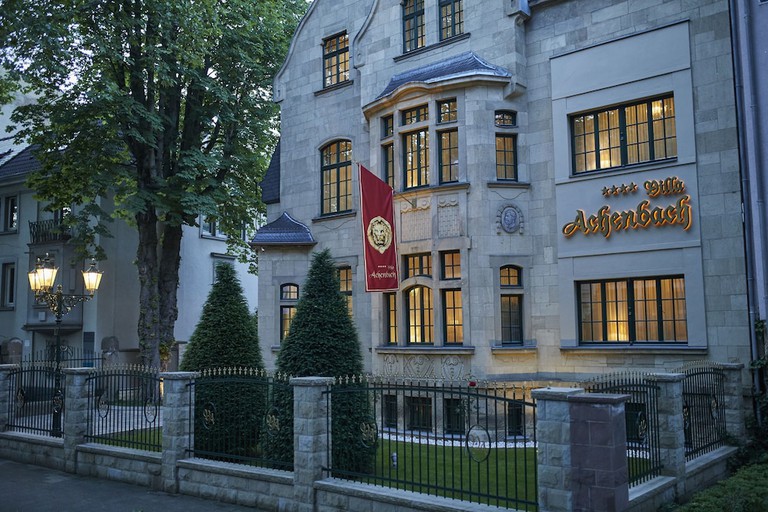 This historic villa was constructed in 1907 as a private residence before it was redesigned as a hotel. Each category of rooms has its own unique style, featuring 19th century mahogany furniture, four-poster beds, rain showers and balconies. Beyond the rooms, the ornamental Victorian-style gardens with towering trees and an illuminated fish pond add to the ambiance of the hotel. In Villa Achenbach, vintage luxury goes hand-in-hand with all the modern amenities that you might expect. 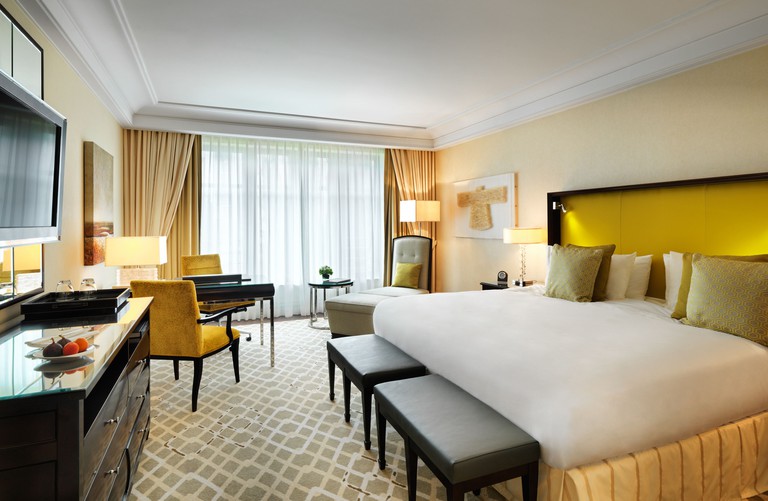 The Breidenbacher Hof has remained a top choice for visitors since 1812 with good reason. Old-world charm and modern architecture interweave to create a truly memorable stay. Marble vanities, superior linens and a tasteful array of fine art in the rooms never fail to wow. Enjoy a gourmet European meal at The Duchy, whipped up by head chef Philipp Ferber and his team. The hotel enjoys an enviable location in the Old Town, right on the Königsallee, Dusseldorf’s glamorous shopping street. 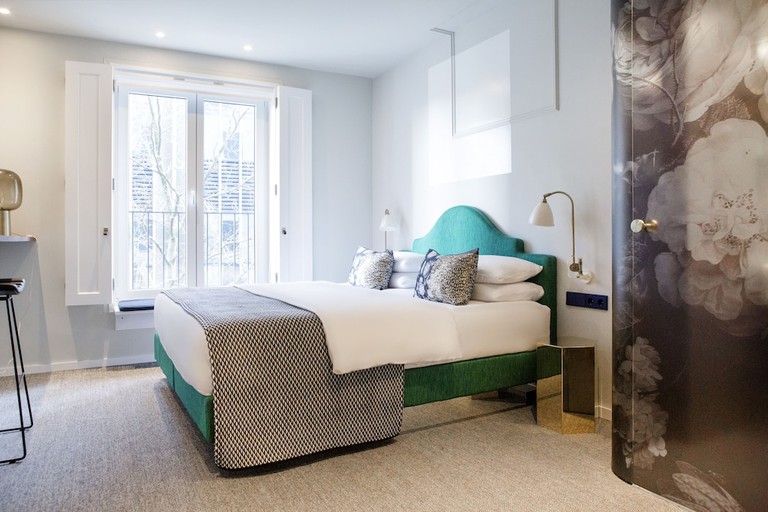 Designed by Dutch designer, Vivian van Schagen, The Fritz combines luxury and urban modernity with homely hospitality. Floor-to-ceiling windows illuminate the white rooms, which are punctuated with bright bed frames and geometric artwork. The Michelin-starred restaurant, Fritz’s Frau Franzi, has a playful design that’s echoed in the inventive dishes. Breakfast is especially good with an abundance of vegetarian options (still unusual in Germany). Konigsallee and the River Rhine are just a few minutes walk from here.

This is an updated version of an article originally by Anwesha Ray.