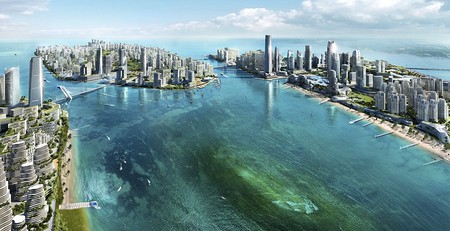 With all the recent advancements in digital technology and ‘smart thinking’, we often wonder what the world will look like in twenty years’ time. In the architecture world, Forest City will be the first multi-tiered urban living space featuring only plants, vertical tree skyscrapers and two underground layers for roads and parking. The project is set to be completed by 2040 across a span of four man-made islands between Malaysia and Singapore and is being envisioned as a ‘dream paradise for all mankind’—a prototype for utopian living environments of the future.

What is Forest City?

Forest City is an ambitious urban residential project by the Chinese development group Country Garden Pacific that will house 500,000 residents by 2050. It’ll also provide top international schools and hospitals, entertainment facilities, institutions for leading financial and tech industries and a high-speed railway to the neighbouring metropolises of Singapore and Kuala Lumpur.

The ‘forest-like’ environment will create a perfect ratio between nature and buildings with rooftop gardens, ample green spaces and vegetation growing on the exteriors of man-made structures to give the appearance of giant, sci-fi super trees. It will apply pioneering ideas in ecology and urban planning to enrich biodiversity and sustain Malaysia’s greenery as it develops. 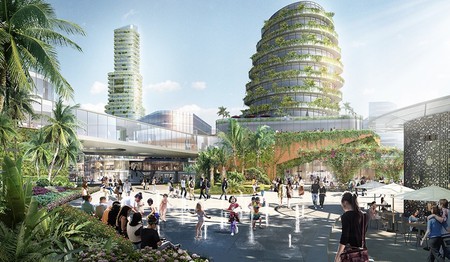 Forest City will be the first in the world to adopt underground roads and a further level below for automated parking to free its streets from traffic pollution and noise, and to allow pedestrians to walk about in an uncongested space. The only above-ground transport network will be made up of driverless electric trains.

Having won the United Nations Sustainable Cities and Human Settlements Award twice, this ‘innovative and sustainable base’ will create an ecosystem that harmonises modern life and environmental awareness. The plants in this urban forest will form a ‘natural barrier’ to clean the air from carbon emissions which currently form at startlingly high levels across some parts of South East Asia and the entire city will be equipped with rainwater conservation systems.

Catering to the needs of the future

By 2050, it is estimated that over 66% of the world’s population will live in cities as countries continue to urbanise and workers are attracted to these economic hubs. At the same time, urbanisation poses a great threat to the environment with issues such as carbon emissions and (in developing nations like Malaysia) deforestation that threatens to destroy the country’s natural beauty. There is a demand to address how the world can continue to modernise without having destructive effects on the planet.

There are currently no other cities in the world with a blueprint like Forest City. It would be impossible to create this 3D structure in any existing city because all of the groundwork, such as piping, that would need to be removed and completely redesigned. A city similar to Forest City would need to be built on a fresh piece of land.

The showrooms for Forest City are filled with potential residents buying into the dream of a ‘smart and secure future’ at a price of £1 million (almost $1.4 million USD) for a four-bedroom house. Each property uses the latest technologies to provide a built-in security system with facial recognition and 24-hour surveillance. Such Smart Cities focus on how digital technology can be best applied to make cities more liveable, convenient, connected and environmentally conscious. 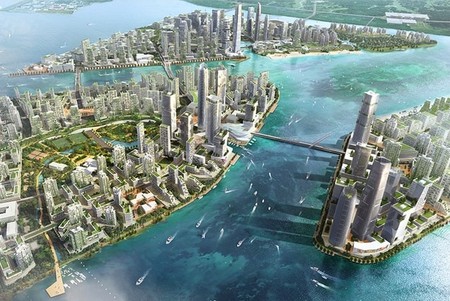 Forest City is meticulously planned on every level to provide the people of 2040 with the kind of harmonious life that we only see on Black Mirror episodes. With this kind of precedent for how the future should look, perhaps more places like Forest City will soon become a reality.