The Meanings Behind Georgia's 5 National Dances 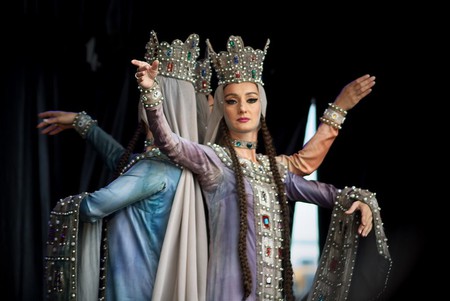 The evolution of Georgian national dances began as soon as the cities started to celebrate mass holidays in the Middle Ages. Military moves, sports games, and dances performed at those celebrations were the most popular types of folk art. What Georgians have today, though, underwent a long transformation during the different epochs.

Looking back at the history

The dances emerged in villages and were connected with agriculture. These dances preserved the pagan models together with its traditions, rules, and customs. The continuous invasions of the neighboring countries in Georgia gave rise to dances with a combat character.

Over the centuries, the nation has created more interesting and richer dance traditions, choreography, performance techniques, and synchronization of music and movement.

Georgians do not only perform the ancient dances, but also create new choreography. All the dances have similar characteristics – women’s dances are always distinguished by a sense of synergy, lyricality, and grace, while men’s dances show dignity, courage, nobility, and pride.

The 1940-50s became the new era of Georgian folk choreography, the time when well-known ensembles were created. In 1945, Nino Ramishvili and Iliko Sukhishvili established the National Ensemble Sukhishvilebi, which is still very popular today both in Georgia and abroad.

Kartuli, known as Georgian dance in English, is characterized by amorous content that represents a chivalric courtship ritual and the aesthetic ideals of the nation. The dance clearly shows the majesty of a woman, the feeling of freedom, and the pride of the man. It doesn’t belong to any particular region, it is a general, nation-wide performance.

The dance consists of two main parts. The first is called davla and is only performed by a man. From the right side of the stage, the man enters the arena and with dance moves approaches the group of women. He’s looking for his companion and when he finds her, with a series of steps gets closer to her and bows his head as the sign of an invitation for a dance.

A woman dressed in a traditional national garment accepts his invite and starts circling around. The happy man follows her from behind from the left side and tries not to get too close to her. The whole dance shows the feeling of sincerity and the demure rituals of love.

The roots of Khorumi lie in the ancient state of Georgian culture – Diaokh and Colchis. There are several variations of Khorumi that have been preserved up to today, with Adjarian, Gurian, and Lazian being the most important ones.

Georgian choreographers have gathered the elements of each and created the dance structure of Khorumi that is performed today. The dance has four parts: a search for the warrior’s camping place, the reconnoiter of the enemy camp, the fight, and the victory and its celebration. Traditionally, the dance is performed only by men with an odd number of dancers.

Khorumi is accompanied by the national folk music instruments known as doli and tchiboni and has a very different musical rhythm than any of the other Georgian dances.

Samaia is a dance for three women and is characterized by graciousness, kindness, and feminine beauty. The dance is accompanied by a song. Traditionally, the dance was performed by men and women, but over time it changed, and what you see today’s ensembles performing features only three women. The dancers move harmoniously – their movements are well synchronized as if only one person is dancing.

This dance was introduced in 1946 and was performed by a man and a woman. However, later on, it changed into a group dance involving more males and females. Scholars believe that the roots of Gandagana dance lie with the ancient cult of fertility. The characteristic humor and rhythmic movements of the dance are supposed to have derived from it.

The dance is a complex set of dance moves and swings. It starts with a slow rhythm and increases gradually as the dance progresses. Performed to a cheerful, humorous, and satirical song, the dance is one of the favorite dances to perform at gatherings of friends, weddings, and other celebrations.

Perkhuli is believed to be one of the oldest and most broadly performed rituals in the nation. There have been different types of Perkhuli performed throughout the country. However, what the audience can see today is the Guruli version that traditionally was performed by women. Involvement of the men in the dance is the result of modernization.