The Most Impressive Architectural Landmarks in Tbilisi 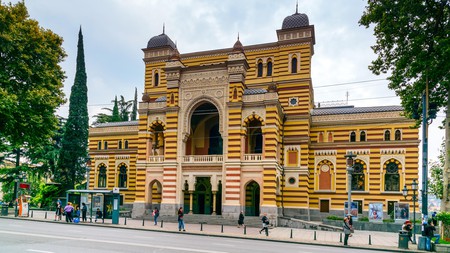 A characteristic of Tbilisi’s ongoing transformation is its sharply opposing styles of architecture. The old city, Abanotubani, is still in rubble – while traces of Georgia’s era as a former Soviet Union republic combine in the post-constructivist, 18-storey Bank of Georgia headquarters. A super-modern Peace Bridge pops up along those old facades. The juxtaposition between new and old in the Georgian capital makes for unusual sights – no matter which style you prefer.

Keen to visit Tbilisi? Let our Local Insider show you the best bits on a guided walking tour as part of our specially curated nine-day Georgia adventure. 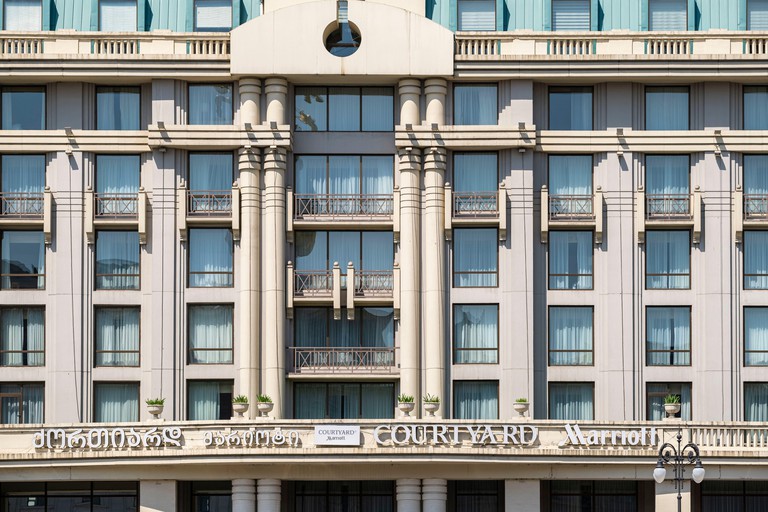 © Hemis / Alamy
Today a luxurious Marriott hotel located on Rustaveli Avenue, this building was once a residence of Mikael Aramyants, an Armenian oil magnate, financier, industrialist and a philanthropist. The construction of the building started in 1911, according to the plan of Russian architect Aleksander Ozerov, who used to live in Tbilisi. However, it was completed by Armenian architect Gabriel Ter-Mikelov in 1915. This Renaissance- and baroque-style building has five floors and still preserves its old architecture both outside and inside. 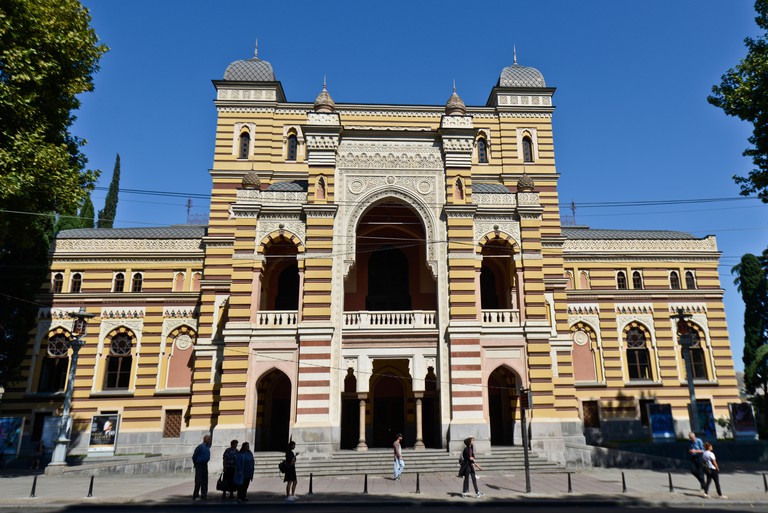 © Mariano Garcia / Alamy
The history of the State Opera House spans more than 165 years. The base of the so-called Caravanserai Theatre, which accommodated 800 spectators, was laid out in 1847 on the orders of Prince Mikhail Vorontsov, the Viceroy of the Caucasus. The first opera theater in Transcaucasia opened in 1851 – the interior, designed in Moorish style, is one of the most beautiful, fascinating and elegant theatrical constructions in Tbilisi. When the French writer Alexandre Dumas traveled to Tbilisi in 1858 and visited the opera, he wrote a whole chapter about its beauty in one of his books.

Since its opening, famous opera and ballet troupes from over the world have performed here, including an Italian group led by composer Francisco Asenjo Barbieri, and the St Petersburg Ballet Company. In 1874 the Opera House was destroyed by a fire, but a new one was constructed in 1896. Victor Johann Gottlieb Schröter, a leading architect of Baltic-German origin, built the new opera house in neo-Moorish style. Even though the decorations and style are Oriental, its layout, the main hall and foyers are typically European. The Opera House underwent major rehabilitation works in recent years where everything was modernised with an improved structure. 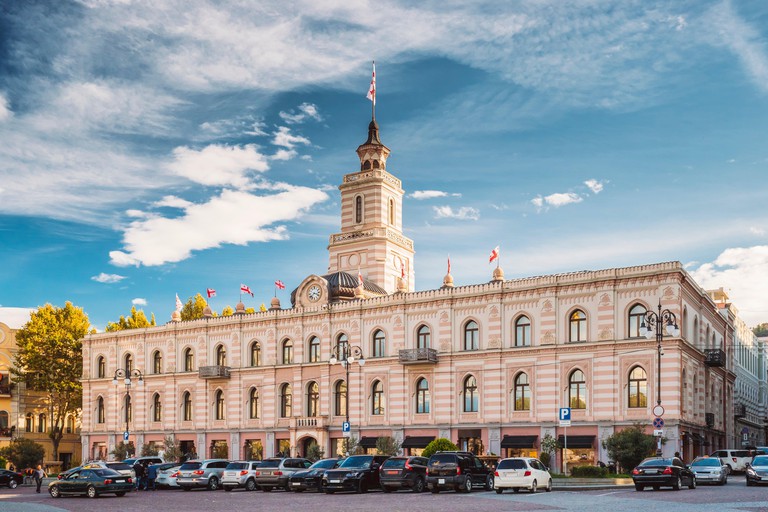 © Ryhor Bruyeu / agefotostock / Alamy
What now houses Tbilisi City Assembly is a result of a thorough and gradual reconstruction of a city police building from the 19th century. The original building was built under the Russian Empire in the 1830s, but was reconstructed several times – taking a different look over the last 200 years. It served as a Chancellery of Chief Policemaster and as a police department until 1879. A competition in 1878 for the remodel of the building into the City Hall was won by the architect Paul Stern. Its exterior architecture reflects the then-popular exotic style with neo-Moorish design. A tower was added in 1910, and the building was further expanded in 1912. 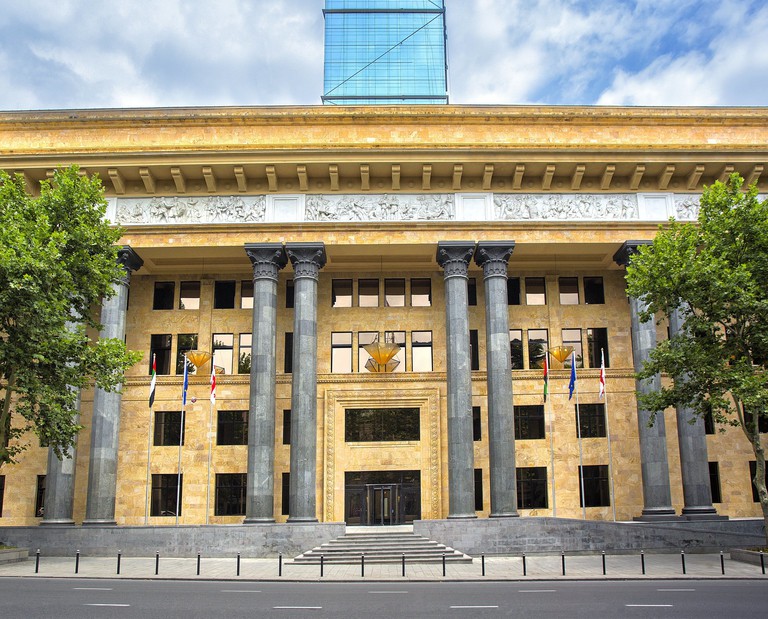 Courtesy of Biltmore Hotel Tbilisi / Expedia
The IMELI building, located on Rustaveli Avenue, is an example of Socialist Classicism style. Constructed between 1934 and 1938 by Soviet architect Alexey Shchusev, it was built to house a Tbilisi branch of the Marx-Engels-Lenin Institute. The name is a Georgian version of the Institute’s Russian acronym name IMEL, which prevailed in Tbilisi even after the end of the Soviet Union.

Shchusev’s design was intricate, featuring details of constructivism and Socialist Classicism. The exterior and interior are furnished mainly with metal and wooden works, as well as with different Georgian natural stones and marbles. After the collapse of the Soviet Union, IMELI was home to various government institutions, including the Parliament of Georgia, Constitutional Court of Georgia and the Central Election Commission Office. Georgia’s first post-Soviet constitution was also adopted here on 25 August 1995. Now the building is home to the five-star Biltmore Hotel. 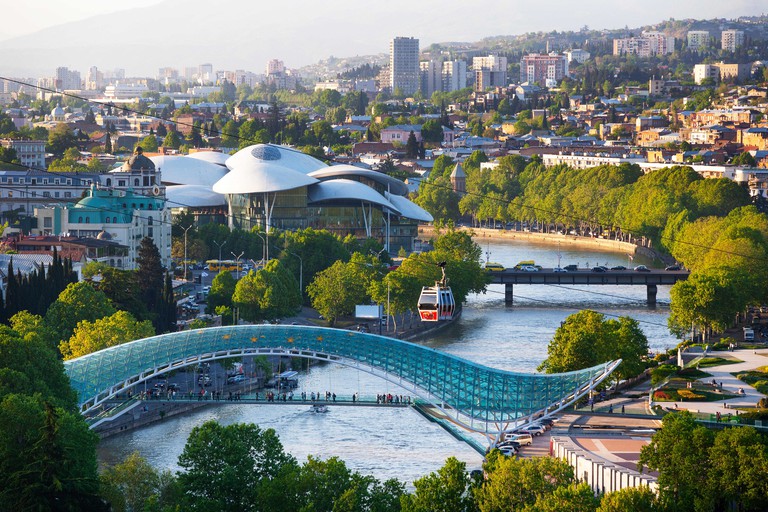 © Westend61 GmbH / Alamy Stock Photo
This is one of the first very modern buildings in Tbilisi. A bow-shaped pedestrian bridge, made from steel and glass, Peace Bridge connects Rike Park with Erekle II Street over the Mtkvari River. Thousands of LED lights illuminate the 150-meter long bridge at night, which are switched on 90 minutes before sunset. The bridge itself was designed by Italian architect Michele De Lucchi, while the lighting design is by Philippe Martinaud, a French lighting designer. The structure was built in Italy and transported to Tbilisi in 200 trucks. The lighting, though, was installed on site.

Building
Facebook
Email
Twitter
Pinterest
Copy link
Share
This educational institution is housed in the former Kobulashvili mansion, which was ultimately reconstructed and refurbished by Georgian architect Simon Kldiashvili in 1902. The organisation is one of the oldest educational facilities in the field, both in Georgia and the region. Considered a historic building, the State Academy of Arts is a unique monument of Georgia’s cultural heritage. The building features a mixture of European and Oriental architecture, and the main attraction is the so-called the room of mirrors, done by Iranian masters in Qajar art style. 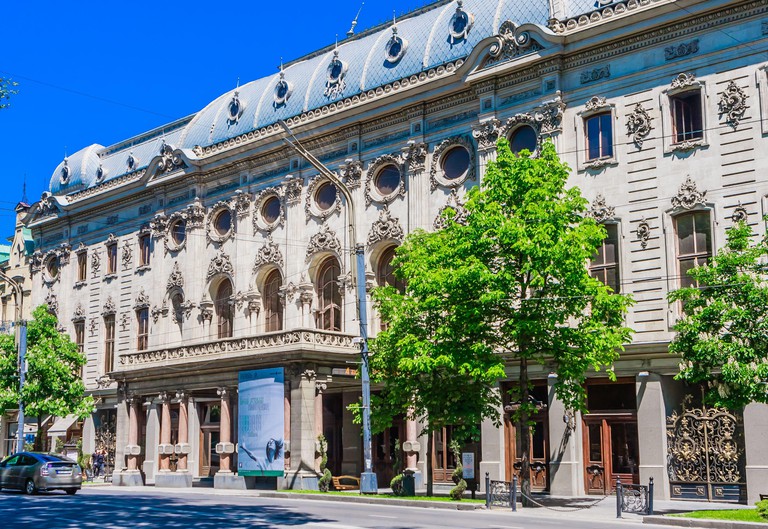 © Nikolay Korzhov / Alamy
The current theatre building was built in 1887 to house the Artist’s Society of Georgia. The design was created by Russian and Polish architects Cornell Tatishchev and Aleksander Szymkiewicz, who both worked and lived in Tbilisi. The facade features wide windows, risalitas adorned with large pilastros and frontons, big arch row windows and a porticus on the pedestrian side of the street. The design uses many elements of rococo style. The basement of the building housed a restaurant called Kimerioni, which used to be a meeting point for many local poets and artists. The walls of it were painted by famous Georgian artists like Lado Gudiashvili and David Kakabadze – unfortunately, those masterpieces were whitewashed during the Soviet era. The restoration process of the theater managed to restore only a small portion of those paintings. 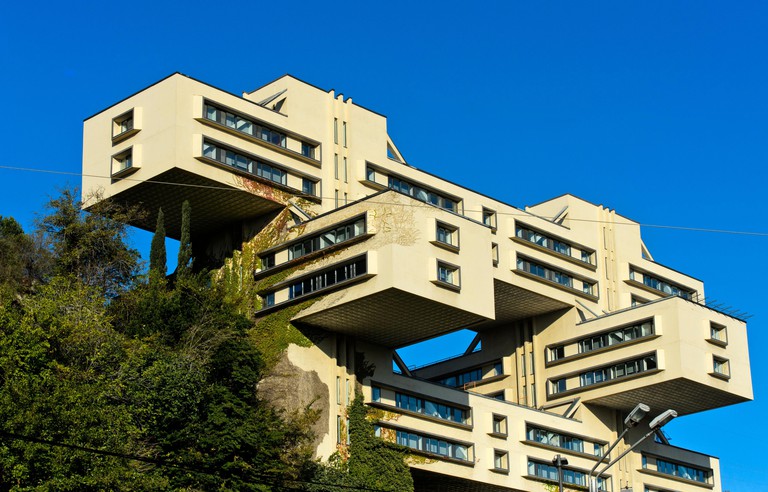 © GFC Collection / Alamy
The former Ministry of Highway Construction is now the Bank of Georgia headquarters. This 18-floor building was designed by Georgian architects George Chakhava and Zurab Jalaghania. The building is set on a steep hill, descending from west to east. Significant parts of the building are raised off the ground, and it has two entrances, both at lower and higher levels.

The structure consists of a grid of solid interlocking forms, where five horizontal parts seem to be placed on top of each other. Three pieces are adapted as an east-west support at a right angle to the hill; two are located along the slope. The building holds on and hangs from three cores. The design is based on a theory named Space City method. The idea is to use less area and give the area below the building back to nature. 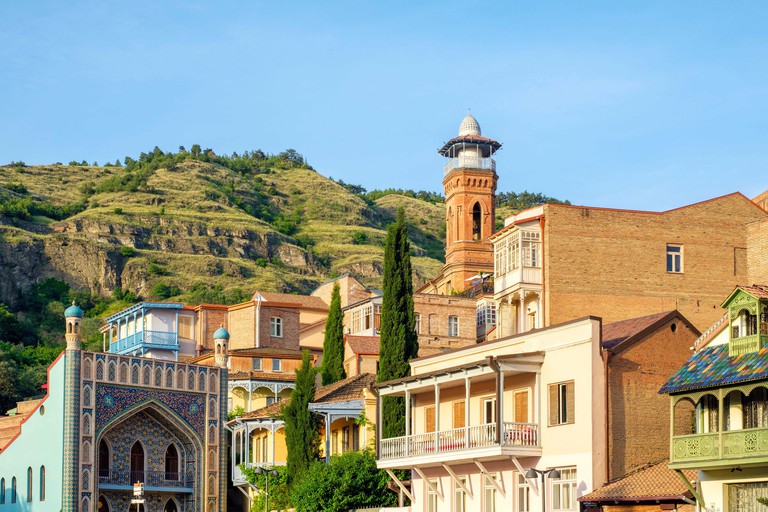 © Jason Langley / Alamy Stock Photo
Often called “colourful baths” due to the colourful mosaics that adorn the exterior of the Orbeliani Baths, this is one of the most impressive buildings of Abanotubani. Most of the bathhouses in Abanotubani date back to the 17th century and have a trace of Iranian architecture. Orbeliani Bath House was also transformed into an “Eastern” style in the 19th century.

Building, Cinema, Museum
Facebook
Email
Twitter
Pinterest
Copy link
Share
The building which today is home to the Georgian State Museum of Theatre, Music, Cinema and Choreography is connected to a love story. Designed by well-known architect Paul Stern in gothic and Islamic architectural styles, the building was commissioned in 1895. However, the design was changed before the completion of the project because German Prince Constantine Peter Oldenburg bought the building for a Georgian lady, Agrafina Jafaridze-Dadiani, in 1882. He met Agrafina in Kutaisi and fell in love with her, despite the fact that she was married to a Georgian nobleman. The prince was so impressed by her beauty that he ignored her marital status and confessed his love to her. Agrafina quickly forgot her commitment to her husband and left Kutaisi with Oldenburg to settle in Tbilisi. The palace was a gift of his great affection for her. A three-floor tower, beautifully decorated cornice, open terrace, high merlons and steep roofing blend to give the palace an exotic look that’s uncharacteristic of Tbilisi’s architecture.
Give us feedback