The Most Beautiful Georgian Towns 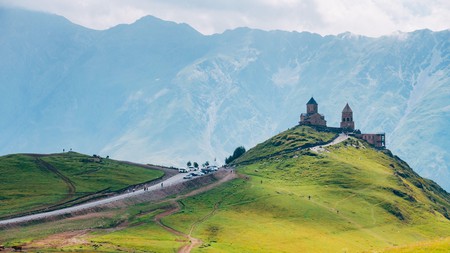 Georgia is a country of lush nature, medieval towns, good food, fantastic wine, one of the oldest languages in the world and hospitable people. Unsurprisingly, it’s caught the eye of many travellers. If you are one of them here’s a list of the most beautiful Georgian towns – besides Tbilisi.

Experience these beautiful Georgian towns with a group of like-minded travellers on Culture Trip’s nine-day, small-group Georgia tour, led by a Local Insider.

Mtskheta is one of Georgia’s most famous towns. The former capital is just a 20-minute drive from Tbilisi and is the one place every Georgian takes their visitors to see. The town was founded 3,000 years ago, but Mtskheta’s main attraction is the marvellous Svetitskhoveli Cathedral. This architectural masterpiece of the early Middle Ages is also known as the burial place of Christ’s mantle and has been named a Unesco World Heritage site. 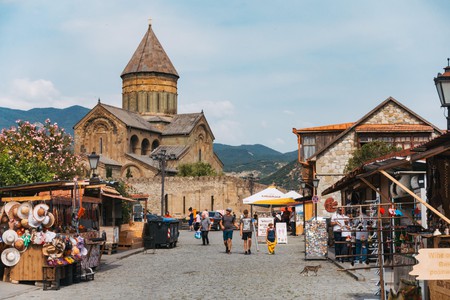 Gori is another city that’s close to the capital. The name comes from the Georgian word gora meaning a “hill” or a “heap”. The town is located on the main highway of the country that connects the western and eastern parts of Georgia. Gori is also famous for being the birthplace of Soviet leader Joseph Stalin. Here, you can visit his house-museum, get to know his childhood years and even see his private railway carriage. 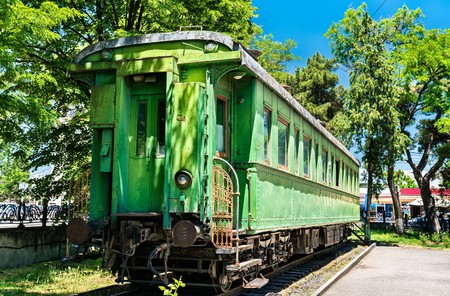 Just like Mtskheta, Kutaisi is a former capital and one of the oldest cities in Georgia. Its Unesco World Heritage Site, Bagrati Cathedral, is an 11th-century building that was built during the rule of King Bagrat III. During the various invasions, it was destroyed many times and was entirely reconstructed in 2012. Not far from Bagrati Cathedral, Gelati Monastery was founded in 1106 by King David IV, known as David the Builder. Historically, it was one of the primary cultural centres of the country and was recognised as one of the earliest educational institutions of the state. 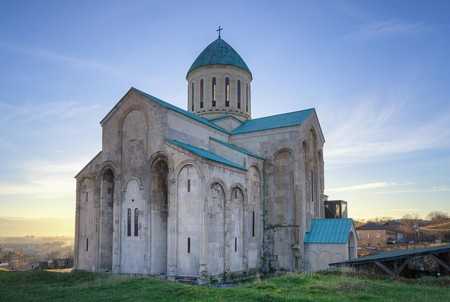 Located 157km from Tbilisi and 1,740m above the sea level, this small town was founded by a monk called Stephan, who built a hermitage here. The town’s name, Stepanstsminda is a combination of the two words, “Stephan” and “Saint”. Situated in the Greater Caucasus, the only road that leads to the town offers magnificent views. The town itself is not designed for tourists, but the reason it’s quite popular is because of the beautiful Gergeti Trinity Church, which sits at the base of Mount Kazbegi. 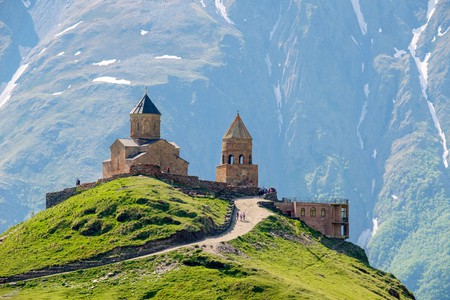 According to archaeological findings, Telavi has been inhabited since the Bronze Age, and it developed into a significant political and administrative town in the centre of the Kakheti region. Telavi is a fascinating place for fans of architecture and design. Since its existence, Kakhetian kings, Russian tsars, Georgian monarchs and Romans have all left their architectural marks. Among its more famous attractions are the old fortress walls, Dzveli Galavani, the fortress of the lord (Batonis Tsikhe) and a 900-year old sycamore tree. 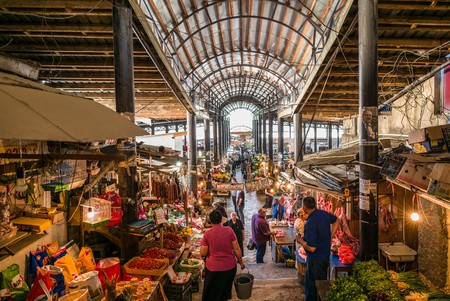 With its long history, archaeological treasury, beautiful town centre and breathtaking views of the Alazani Valley, Sighnaghi never leaves its visitors unsatisfied. Once here, a must-see destination is Bodbe Monastery. Located just 2km from Sighnaghi, the area is a prominent religious place as it houses the remains of St Nino, the saint who brought Christianity to Georgia. 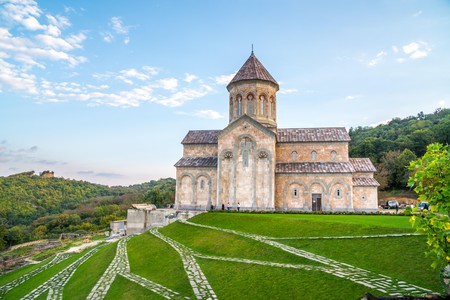 Borjomi is famous for its resorts and mineral water. The original water is a bit warm with a salty and sulfuric taste. The manufactured and bottled spring water tastes very different and is much more carbonated compared to European spring waters. The drink is still popular in former Soviet countries, and for Georgian men it’s the best drink to cure hangovers.

Besides sampling the water, you can visit the Borjomi-Kharagauli National Park. Or if culture is more your thing, head to the neighbouring village, Likani, to explore the Romanov summer palace. Another great option is to take the Borjomi-Bakuriani railway – Georgians call it “Kukushka” – for magnificent views of lush forests. On the way, you might come across the masterpiece Eiffel Bridge, a bridge that connects Tsagveri to Tsemi. In 1902, the Russian royal family ordered the bridge to be built in France and brought Georgia. 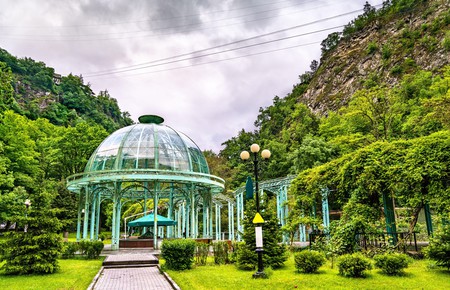 Located 318km from Tbilisi, Zugdidi is a central city of Samegrelo region. Historically, it was a capital of the Principality of Mingrelia until 1867, when the Russian Empire abolished the principality. Zugdidi was home to the Mingrelian royal family and Dadiani was their palace. Two of the most significant artefacts in the Dadiani Palace Museum is Napoleon’s death mask, and the holy robe of Mary, the mother of Jesus. In Zugdidi, you might also visit its Botanical Garden and city boulevard. Besides its architectural landmarks, the Samegrelo region is also known for its unique cuisine. 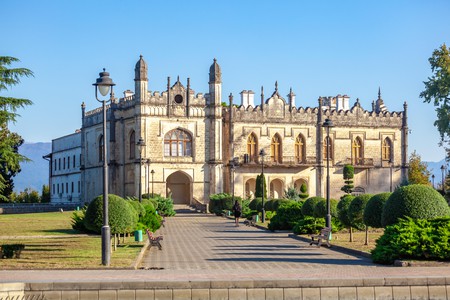 Mestia is a central city in the Svaneti region. Located 128km from the capital, it’s a good idea to make a stop here if you’re already heading to Zugdidi. Even though flights operate from Natakhtari to Mestia’s Queen Tamar Airport, your trip might be cancelled last minute due to weather conditions. One of the most remote regions of Georgia, Svaneti has managed to retain its medieval defensive towers, traditions and treasury. For adventure lovers and hikers, Mestia is an excellent town to base yourself. Svaneti offers some of the most beautiful lakes and hiking opportunities in the whole country. 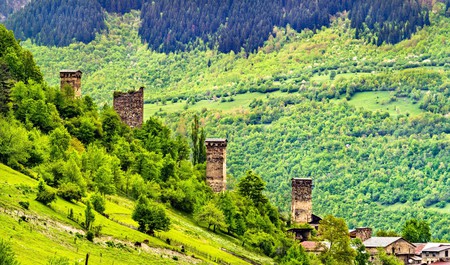 Check out the Svan Towers in Mestia | © Leonid Andronov / Alamy

A coastal city and leading summer destination for locals, Batumi has also become quite popular internationally. The bustling nightlife, modern architecture and wide range of dining opportunities are what makes Batumi an exciting destination for tourists. The main attractions are all located within walking distance along the boulevard. You can also explore the city by bike. 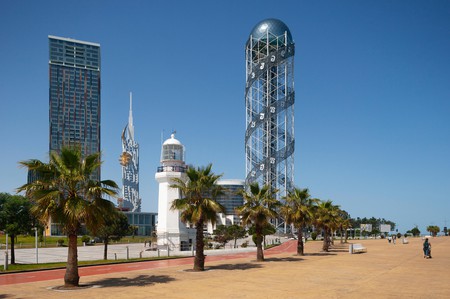