Everything You Need to Know About Georgian Wine 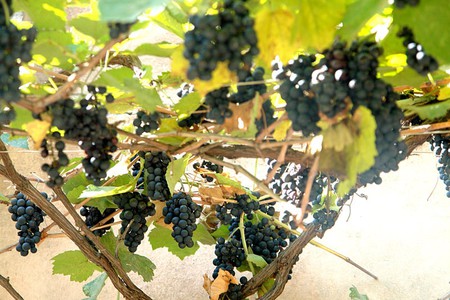 The lush valleys and shielding slopes of Transcaucasia have been home to vine cultivation and winemaking for at least 8,000 years. Due to this, the traditions of wine are weaved into Georgia‘s national identity. Here are all the essential facts and information you need to know about Georgian wine.

What are Georgia’s leading wine-producing regions?

The whole country produces wine, and the particular grape varietals all have their specific micro-zones scattered across the national territory. However, the most well-known region for producing Georgian wine is Kakheti, divided into the two micro-regions of Kvareli and Telavi. Then comes Imereti, Kartli, Svaneti, Adjara, Racha-Lechkhumi and Kvemo Svaneti, and Abkhazia.

The traditional winemaking method Georgia uses calls for egg-shaped clay jars called qvevri. This technique caught the eye of UNESCO, which has listed it as part of the Intangible Cultural Heritage of Humanity.

How big is Georgia’s wine market?

After Moldova, Georgia is the second country in terms of the volume of grape production in ex-Soviet states. Georgian wines have always been highly praised in the former Soviet countries. Today, the beverage is produced by hundreds of small farmers, monasteries, and factories using both traditional and European methods.

Georgia’s climate and territorial conditions are perfect for wine production. Here, extreme weather is very unusual; summers are sunny, while winters are mild and frost-free. The country is rich with natural springs that come from the Caucasian Mountains and flow into the valleys. 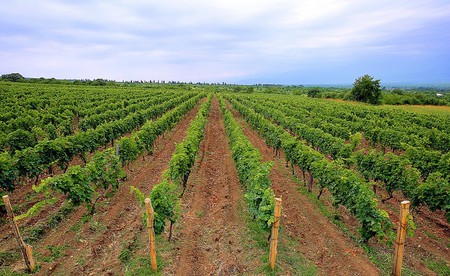 Georgia’s mild climate and humid air, affected by the Black Sea, provide the best conditions for vine cultivation. Here, you can see grapevines growing up the stocks of fruit trees and hanging down. This method of farming has its own term and is called maglari.

Traditional Georgian grape varietals are less known in the world. Even though the country has almost 400 different types of grapes, only 38 are grown for commercial winemaking.

What are some of the most important grape varietals and wines in Georgia?

Ojaleshi is grown on the mountain slopes above the banks of the Tskhenistskali River, particularly in the Samegrelo region of Western Georgia.

Saperavi produces rich dark red wines suitable for extended aging – up to fifty years. It can provide high alcohol levels and is used widely for mixing with other lesser types. Saperavi is one of the essential grapes used in Georgian red wines.

Mtsvane, or green in English, is another very essential grape varietal in Georgian winemaking. It is often mixed with Rkatsiteli to add an aromatic, fruity balance to the wine. 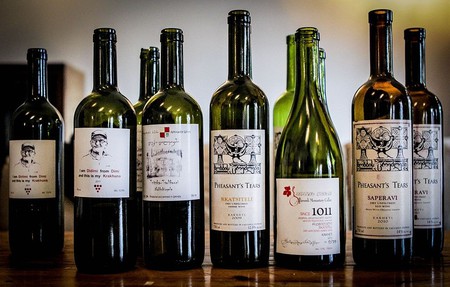 Usakhelauri translates into English as “without name” or “nameless” and is an indigenous grape varietal. The name translates with the meaning of “priceless” or “beyond words” and perfectly describes the exceptional and unparalleled quality of the grape. Grown on the mountain slopes of Lechkhumi, the cultivation process is quite difficult and is characterized by a low harvest volume. Each year, only three tons of grapes can be harvested, leading to Usakhelauri wines being very expensive.

This is another very important grape varietal highly used in Georgian winemaking. Rkatsiteli also grows outside of Georgia, particularly in former Soviet countries.

Alexandreuli is considered to be one of the oldest grape varietals in Georgia.

Chinuri, or Chinebuli, translated into English as “excellent” is grown in the Kartli region. It reaches full maturity in late October and is usually used in sparkling wines by mixing Goruli Mtsvane and Aligote.

What are the most common Georgian wines?

1. Tsinandali is a white wine made from a combination of Rkatsiteli and Mtsvane grapes from the micro-zones of Kvareli and Telavi in the Kakheti region.

2. Tvishi is a naturally semi-sweet white wine made from the Tsolikauri grape.

3. Alaznis Veli is a white semi-sweet wine made by mixing Rkatsiteli, Tsolikauri, Tetra, and other grape varietals grown in Western and Eastern parts of the country. The wine has a straw color and a harmonious taste.

4. Mukuzani, a dry red wine made from only Saperavi grapes grown in Mukuzani and Kakheti, is matured for three years in oak to give it flavor and complexity. It is one of the best dry red wines made from Saperavi.

5. Kindzmarauli is a high-quality naturally semi-sweet wine with a dark red color and is made from Saperavi grapes grown on the slopes of the Caucasian mountains in the Kvareli district, in the Kakheti region.

6. Khikhvi is a white dessert wine made from the Khikhvi grape cultivated in Kardanakhi, which has been producing wine in Georgia since 1924. The wine is an amber color and has a delicate taste.

7. Akhasheni is a naturally semi-sweet red wine produced from the Saperavi grape cultivated in Kakheti. The dark pomegranate color wine has a velvety taste with a chocolate character.

8. Khvanchkara, a high-end, naturally semi-sweet red wine is the blend of Mudzhuretuli and Alexandria grape varietals grown in the Khvanchkara vineyards in Racha. The wine has well-balanced tannins with a raspberry flavor. This dark ruby color wine is one of the most famous Georgian semi-sweet wines.