A Regional Guide to Georgian Khachapuri 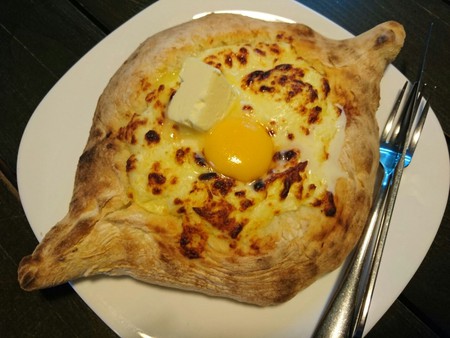 After khinkali, khachapuri is a favourite national dish in Georgia. This pizza-like cheese pie got its name from two Georgian words: khacho and puri (cottage cheese and bread). The pie is made from a mozzarella-like cheese called sulguni, a salty alternative to its Italian cousin. Khachapuri is an integral part of Georgian cuisine and can be found on every Georgian family’s dinner table. Each region of the country has its own version of khachapuri that can be distinguished by the shape or the ingredients used.

Imeruli khachapuri comes from the Imereti region and is the most common version you’ll see at Georgian feasts. It is circular in shape and is made from imeruli cheese, not sulguni. The dough is either yeast or yogurt based.

Often called khabizgina, the ossetian variety of khachapuri is similar in shape as imeruli, but it uses a mixture of boiled potatoes and cheese.

Adjaruli khachapuri is the most distinguishable of all the others by its shape. This boat-shaped pie is baked in a brick oven and topped with a nob of butter and a raw egg. To eat it correctly, you must mix the filling and dip the crust in the gooey mixture.

Adjaruli Khachapuri – Khachapuri (Georgian: ხაჭაპური) is a traditional Georgian dish of cheese-filled bread. The bread is leavened and allowed to rise, and is shaped in various ways, usually with cheese in the middle and a crust which is ripped off and used to dip in the cheese. The filling contains cheese (fresh or aged, most commonly sulguni), eggs and other ingredients. It is Georgia's national dish #GeorgianFood #Khachapuri #AdjaruliKhachapuri #GeorgianCuisine #Foodie

The only difference of svanuri khachapuri from other varieties is that the cheese filling is mixed with millet flour, which results in a dough that is a bit grey, rather than white.

Megruli hails from the Samegrelo region and is similar to imeruli and ossetian in shape. The only difference is that megruli uses sulguni cheese, both inside as the filling and as a topping.

Abkhazian khachapuri is called achma and looks like lasagna. It’s made from multiple dough layers with cheese in between. Preparation of achma is also different compared to other types of khachapuri; similar to lasagna sheets, the layers of the dough are boiled before the dish is assembled and baked. Once all the layers are cooked, they are transferred into a baking dish, commonly a rectangle one and layered with cheese and melted butter.

Often called bachulebi, the only difference between rachuli khachapuri and the rest is its shape. Instead of a circle, it’s a rectangle. Once the dough is rolled out, the cheese filling is placed in the center, then the sides of the dough are folded into an envelope shape. Last, the top is brushed with egg wash.

This type of khachapuri is so unique, few locals call it khachapuri. They call it a ‘guruli pie’. It originated in the Guria region in western Georgia, where it is made on the 7th of January, the Orthodox Christmas holiday. Gurians call it a ‘Christmas Pie’. The dish looks like a calzone in shape and is filled with cheese and boiled eggs.

Mkhlovani is not considered official khachapuri, but it looks and tastes the same. A staple food of Georgia’s eastern mountain regions, mkhlovani calls for beet leaves and cheese as its filling.