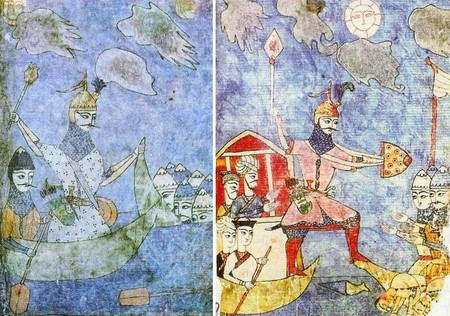 Georgian art has evolved over millennia and has grown along with the development of the country. The geographical location of Georgia, being on the crossroads of Europe and Asia, brought merchants, conquerors, and travelers of all kinds, which inadvertently defined the country’s artistic and cultural heritage. Therefore, Georgian art has experienced influences of a variety of art styles, especially in the nineteenth century. If you appreciate art and love learning about artists from different countries, then you’ll appreciate this guide to Georgia’s most acknowledged painters.

Often referred to as Nikala, Pirosmani was a primitivist painter who posthumously rose to prominence. Flawless simplicity, elegance, sincerity, and natural happiness are words used to describe his work.

Born in 1862, Nikala spent all his life in extreme poverty. He painted the signboards and walls of local restaurants for a living. Most of his paintings show festive occasions, as well as merchants, workers, shopkeepers, noblemen, and peasants. His pictures of animal figures are similar to those children would draw. He never aimed to depict nature perfectly and didn’t pay attention to details. 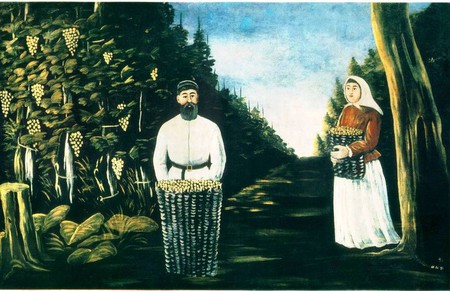 The international reputation and fame for Nikala came after his death in the 1950s, when he became respected as a “naive” artist in Paris and abroad. Impressed by this works, Pablo Picasso even painted his portrait in 1972.

Elene Akhvlediani’s work is full of color and warmth. Her paintings clearly show signs of modernism and the union of national traditions. She is known for her architectural landscapes depicting slanted houses on the slopes with colorful roofs, balconies, uneven stairs, mottled carpets, and more. This is how Akhvlediani depicts Tbilisi. Her works are so remarkable that “Akhvlediani’s Tbilisi” was coined as new concept art by enthusiasts.

She studied art in Paris and Rome in the 1920s, which influenced her works. Pure colors, geometrical objects, and hard lines echo different forms of western art, especially post-modernism.

Besides painting landscapes, Akhvlediani has worked as a graphic artist and a theater decorator. She has illustrated books of famous Georgian writers and designed props and backgrounds for plays in the Marjanishvili Theater in Tbilisi.

Petre Otskheli, born in 1907, created a new world of scientific superheroes. He worked as a costume designer in a Georgian theater, as well as in Moscow, briefly.

He was charged with treason and executed during Stalin’s Great Purge, but his work left a precious impact on theater stage production. Many of this designs for the theater became graphic art masterpieces.

Gudiashvili was born into a family of railroad workers, but he was given the opportunity to study at Ronson’s private academy in Paris in the 1920s together with Akhvlediani. His works were influenced by Niko Pirosmani and were filled with the beauty of Georgian life. His earlier paintings were of dramatic grotesque images mixed with the appeal of romantic mystery. Upon his return to Georgia, the traditions of old Persian and Caucasian art intensified in this works. The colors became warmer, while his perception of the world as a theater grew stronger. Many of his paintings were inspired by ballets, operas, and plays.

Similar to Akhvlediani, besides painting, he worked with the Kashveti Church in Tbilisi, illustrated books, and decorated Georgian cinemas and theater scenes.

Gabashvili became known for his vivid portraits of noblemen, peasants, and townsmen together with multi-figure scenes of Georgian and Asian life based on his earlier sketches of his journey through Central Asia in 1894. 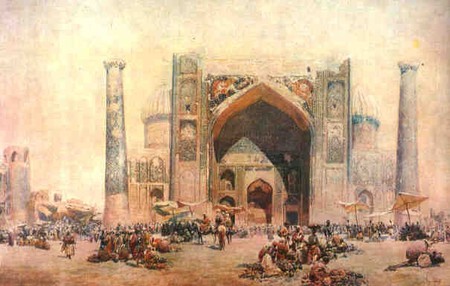 He is considered as one of the earliest representatives of realism. His works were known for showing a wide range of subjects, landscapes, and scenes of everyday life. Even though he is not widely known, his art is profoundly valued. For instance, The Bazaar in Samarkand, originally commissioned by U.S. diplomat Charles Richard Crane, was sold for $1.36 million (£1 million) in 2006.

As a painter, poet, and calligrapher of the seventeenth century, Tavakarashvili’s most famous piece of art depicted scenes from the famous, 1646 Georgian medieval poem, The Knight in the Panther’s Skin. The poem has 39 miniature illustrations that seem to have been influenced by Georgian folk art.

Mamuka Tavakalashvili. Miniatures of The Knight in the Panther’s Skin | WikiCommons

Varazi is known for being one of the first Georgian artists to apply the collage technique to his works, thus he holds a significant place in Georgian art of the twentieth century.

His creative works perfectly merge three-dimensional subjects and pictorial elements, as well as materials like plastics and typographic signs. He used a variety of techniques and artistic applications. Additionally, he was one of the first artists to work in Pop Art style, where he depicted the problems of the time. Today, his works are displayed in famous museums around the world, such as the MoMa and Zimmerli Art Museum at Rutgers University.

When she was one year and ten months old, Petviashvili started to paint. She held her first exhibition at the age of six. In her works, she uses a unique one-touch technique – drawing without taking the brush from the sheet. Petviashvili’s works are among the private collections of Eduard Shevardnadze, Margaret Thatcher, George Bush, and Ilham Aliyev.

Petviashvili has illustrated many books, including The Knight in the Panther’s Skin and The Georgian Folk Tales. Together with other artists’ groups, she created miniatures for the most significant handwritten Bible in the Old Georgian language exhibited at the Holy Trinity Cathedral in Tbilisi.

Now living and working in New York City and Kingston, Jamaica, Chkadua shows a thirst and passion for life in her paintings. Most of her personas are her alter egos making viewers believe that a single person can encompass the whole world within themselves.