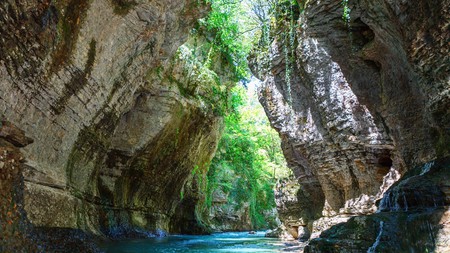 Diversity reigns in the landscapes of Georgia. The west has lowland marsh and temperate rain forests, swamps, permanent snow and glaciers, while the east has a small portion of semi-arid plains and dramatic mountain ranges dominate the skyline. The result? Some of the most beautiful scenery on the planet. If you’re ready to explore, here are the most picturesque natural landscapes in Georgia.

Feeling inspired? You can now visit Georgia with Culture Trip as part of a small group of culturally curious travellers on our specially curated nine-day Georgia trip.

Natural Feature
Facebook
Email
Twitter
Pinterest
Copy link
Share
The Alazani Valley, in the Kakheti region, sits 200m-470m (656ft-1,542ft) above sea level. Mountains surround this 160km (99mi) long valley from both sides and the best way to enjoy the spectacular landscape is to visit the town of Sighnaghi, situated 790m (2,592ft) above sea level. From there, you’ll get panoramic views of the valley and the Greater Caucasus mountains. 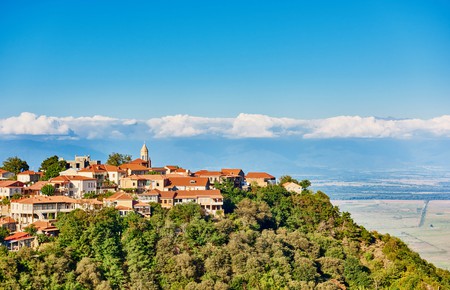 Monastery
Facebook
Email
Twitter
Pinterest
Copy link
Share
This rock-hewn Orthodox monastery in the Kakheti region is set on the half-desert slopes of Mount Gareja and borders Azerbaijan. It was founded by one of the 13 Assyrian monks who spread Christianity throughout Georgia in the sixth century. The area around the complex – including the nearby Mravaltskaro Colorful Mountains – is incredible, and offers beautiful views of the desert and canyons. 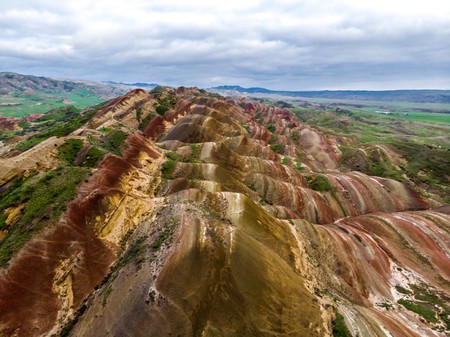 Natural Feature, Hiking Trail
Facebook
Email
Twitter
Pinterest
Copy link
Share
The Abudelauri Lakes are three distinctly coloured bodies of water near the village of Roshka in Khevsureti. You can set aside a whole day to hike between the three – which are appropriately named the Blue, Green and White lakes – or you can take it easy and pitch up a tent by the Green Lake. 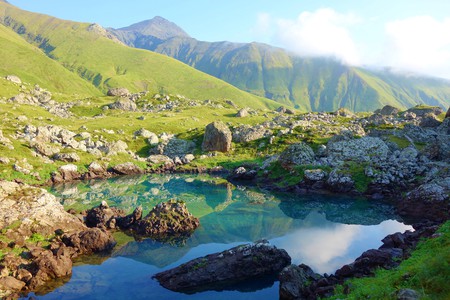 Church
Facebook
Email
Twitter
Pinterest
Copy link
Share
The impressive Gergeti Trinity Church – often named among the most beautiful churches in the world – sits around a 6km (4mi) drive outside the rather pretty town of Stepantsminda, in the northeast region of Mtskheta-Mtianeti. While the spired towers and ancient stone work are certainly picturesque, it’s the spot on the crest of a hill at the foot of Mount Kazbek that makes this attraction stand out. You can visit Gergeti Trinity Church on a guided Caucasus Mountains hike as part of Culture Trip’s epic nine-day Georgia adventure, led by our local insider. 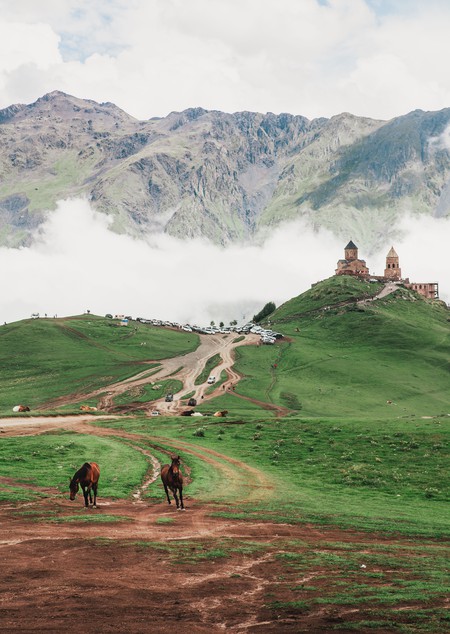 Built in the 14th century, Gergeti Trinity Church has a reputation for being one of the most beautiful churches in the world | © Shutterstock

Natural Feature
Facebook
Email
Twitter
Pinterest
Copy link
Share
Looking for a wild adventure in Georgia? The Black Rock Lake is a natural beauty well off the tourist trail. It sits within an alpine region, and getting there will take a bit of planning. The journey involves a two-day hike (at least) through Lagodekhi National Park. But we guarantee your effort will be well rewarded with gorgeous views. 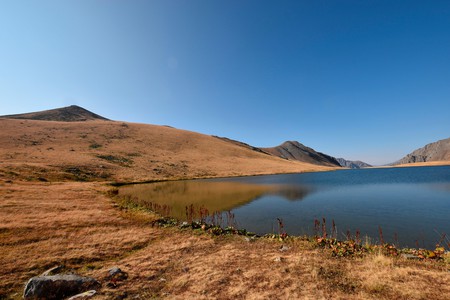 Carved into the side of Erusheti Mountain is Vardzia, a cave monastery complex dating from the 12th century. It was first founded as a fort by King Giorgi III, but his daughter Queen Tamar added the monastery complex to his original plans. It has 13 levels, 15 churches and around 400 rooms. In 1283, a large earthquake badly damaged Vardzia, but you can explore the (still remarkable) site today on a monk-led tour. 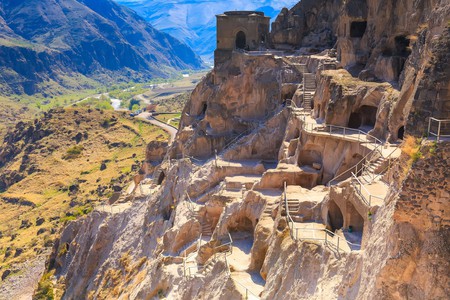 Natural Feature, Park
Facebook
Email
Twitter
Pinterest
Copy link
Share
Considered one of the most impressive natural landmarks in Georgia, Martvili Canyon lies in the Samegrelo region. It has the emerald-green Abasha river running through it and plenty of splendid scenery to accompany a small – or long – hike. Alternatively, you can take a boat ride on the river and walk up to the waterfalls. The underwater world here is as beautiful as the on-land scenery, and there are plenty of diving opportunities for those keen to try some sub-aquatic exploring. 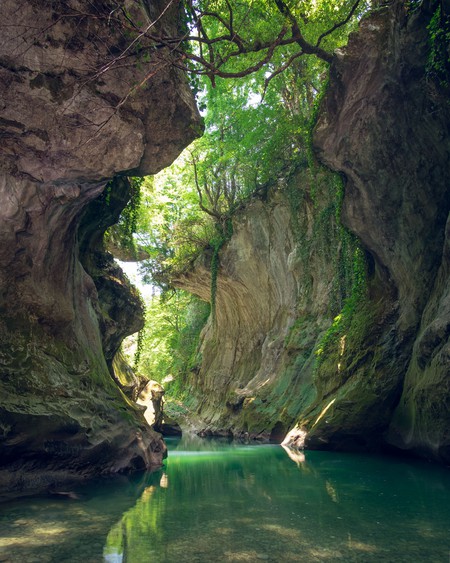 Natural Feature, Hiking Trail
Facebook
Email
Twitter
Pinterest
Copy link
Share
Mestia is a central town of the Svaneti region, 128km (80mi) from Zugdidi, and has played an essential role in Georgian culture for many centuries. This Unesco World Heritage Site is considered a leading community of the Zemo (Upper) Svaneti province, and has medieval defence towers, churches and picturesque mountain views. 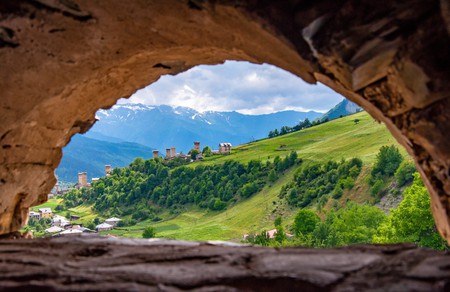 Natural Feature
Facebook
Email
Twitter
Pinterest
Copy link
Share
Tobavarchkhili Lakes, Toba for short, is a lesser known destination only reached by a (sometimes gruelling) three-day hike. However, the scenery on your way there and back is well worth the effort. Located in the Samegrelo region, the lakes get their name from the Megrelian language spoken here – tobavarchkhili means silver lakes. 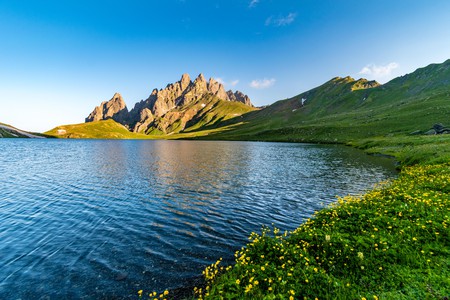 In need of a get-away-from-it-all break? Head to remote Ushguli in the Svaneti region, a collection of four villages embraced by rippling mountains and jagged peaks. Recognised as the Upper Svaneti Unesco World Heritage Site, Ushguli is the highest continuously inhabited settlement in Europe. And from here, you can admire the highest summit in the country (and the third highest in Europe), Mount Shkhara. 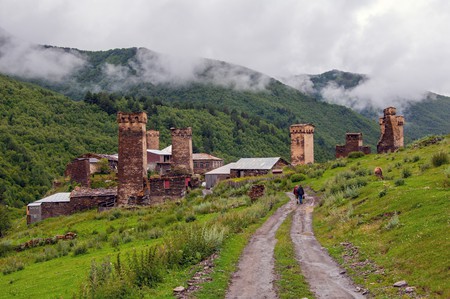 A heritage village in the Tusheti region, tiny Dartlo is dominated by medieval defence towers. Beautiful, yes, but Dartlo is deserted for most of the year. Due to the harsh climate, the village inhabitants head into the lowlands during the winter months and only return in summer. 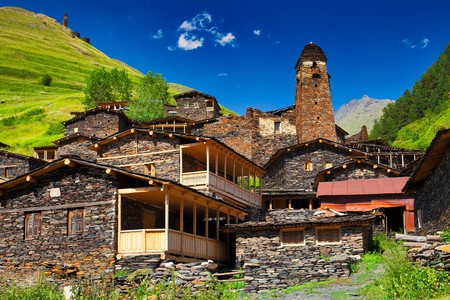 The Dashbashi Canyon, home to a rich biodiversity, is formed by the Khrami river cutting through the Dashbashi volcanic plateau. The flora on the steep slopes of the canyon and impressive waterfalls have created several micro-landscapes and photo-worthy vistas. Better yet, it’s just two hours’ drive from Tbilisi. 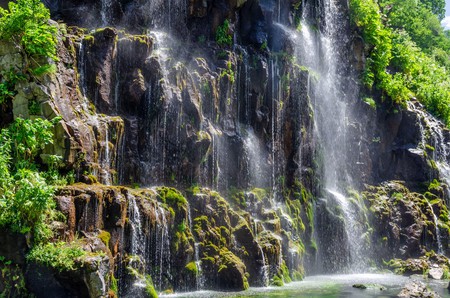 Abastumani, a small town on the Meskheti Range, is a perfect spot for a romantic break. The coniferous forests are gorgeous, but if you want an out-of-this-world view, visit the Astrophysical Observatory. It was opened in 1932 and built here to take advantage of the stable weather conditions and absence of air pollution. You can now visit the museum and gaze into space using the old telescopes. 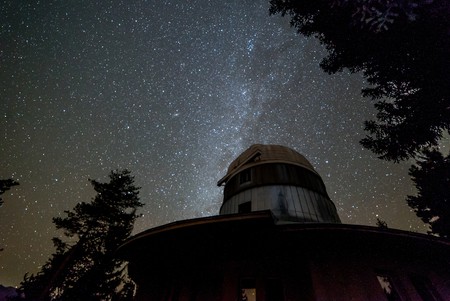 The Astrophysical Observatory in Abastumani is hidden in the depths of the Georgian mountains | © Beka Mamukashvili/Shutterstock.

Natural Feature, Park, Hiking Trail
Facebook
Email
Twitter
Pinterest
Copy link
Share
Borjomi-Kharagauli in the Lesser Caucasus is a vast national park with impressive landscapes along 12 well-marked hiking trails. And when night rolls in, you can stay in a local cottage or pitch your tent in a campsite. Be sure to try Borjomi mineral water, too, it’s said to have healing properties. 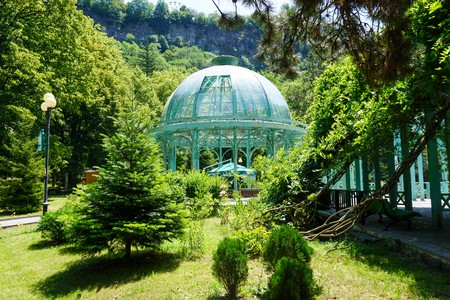 Bakhmaro is a small mountainous resort in the Guria region with dark pine forests and sun-dappled alpine meadows. Its unique climate of sea and fresh mountain air is said to have healing properties, while the untouched nature of its surrounds are a true treasure of the region. It’s also as great for skiing as it is for incredible sunsets, with powdery peaks and sensational views over almost the whole of the country, including the Black Sea. 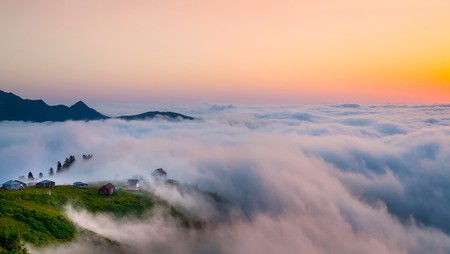