Olivier Rousteing looks more like a model than a fashion designer. He has revolutionized French fashion and has given his fans a key to the backstage of haute couture. The youngest creative director of a French fashion house since Yves Saint Laurent, Rousteing has charmed both critics and global buyers. How did he do it? 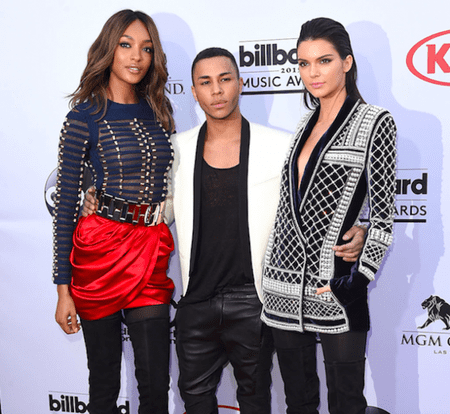 The story of Olivier Rousteing is full of surprises: the youngest and first black creative director of a major French couture house, Rousteing hails from unlikely origins. The prodigy of Balmain speaks openly about his past – placed in an orphanage at seven days old, he was adopted by a childless couple from Bordeaux. A white couple raising a mixed-race child in Catholic and conservative 1980s Bordeaux proved quite a challenge. Constantly bullied at school, Rousteing recalls, ‘Classmates would call me a bastard and would call my mother a prostitute.’ At sixteen, he tried to find out more about his biological parents but learned that French law protects the decision of a mother to remain anonymous. Luckily for him, his adopted family proved to be extremely supportive, especially when it came to letting him abandon law school in favor of fashion studies.

Rousteing’s explosive success is in many ways the luck of being in the right place at the right time. After a successful internship and five-year stint at Roberto Cavalli in Italy, he was accepted as Head of Women’s Prêt-à-Porter Collections at Balmain in 2009. Two years later Balmain’s Creative Director, Christophe Decarnin, stepped down after collapsing from severe burnout – prompting Rousteing to the helm, at the age of just 25. All eyes of the fashion world now turned to the youngest and only black creative director French fashion had ever seen. With critics ready to devour him, Rousteing diplomatically paid homage to his predecessor through his first collections, which were executed with the chaotic elegance and rock spirit typical of Decarnin creations. Over the years he has stayed loyal to the traditional Balmain’s baroque’n’roll style, enhancing it with audacious details: heavy embroidery, color-blocks, ornate beading, tapestry inserts, and devoré (velvet burnout).

But in a sea of talented, established designers, what makes Olivier Rousteing so wildly popular? Undoubtedly it is because Rousteing is the loud, unapologetic manifestation of youth, diversity, and the millennial generation. ‘Fashion is an extremely elitist milieu, it has to start opening its doors a little to the people,’ Rousteing asserted in a recent interview with Vanity Fair France. ‘I realized that fashion was a battlefield in which you had to fight to impose your ideas.’ Those ideas, he loudly asserts, include diversity and women’s empowerment. The designer calls his fans the ‘Balmain army’: diverse in origin and skin-color, and clad in clothes that carry a message of the future. Rousteing has followed up on his promise through Balmain’s recent collaboration with H&M, which opened couture to the masses… selling out in just a few hours!

‘All good art is political.’ – in an Interview with The Telegraph

‘Being modern means having a view or a vision of what the world is today. I want to show a vision of my world, what I see and what I want to see in the future.’ – in an interview with The Telegraph