There's a Chapel Hidden Inside This Incredible Oak Tree 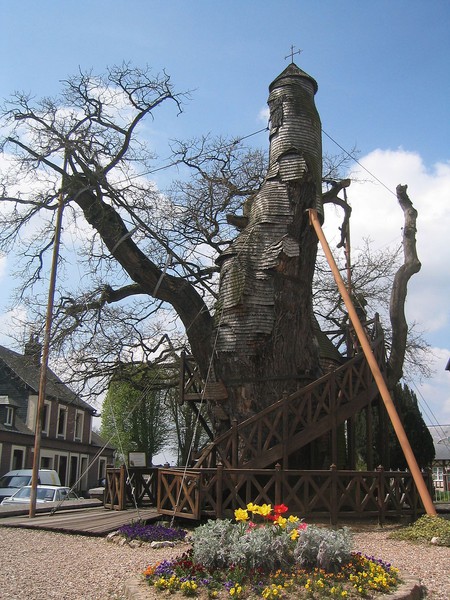 Nestled in the tiny French village of Allouville-Bellefosse, this incredible oak tree is neither a figment of the imagination nor the relic of an old film set. Its ancient hollows shelter two small chapels, reached by a spiral staircase that winds around the trunk.

This fascinating tree lays claim to being the oldest in France. Its two chapels were built in 1669 and baptised under the name of Notre Dame de la Paix (Our Lady of Peace) and the Chambre de l’Ermite (Hermit’s Room).

Having survived the terrors of the French Revolution, The Black Death, Reformation, two World Wars, Louis XIV’s reign, and the Napoleonic era, the towering structure has come to symbolise a fierce stoic resilience.

The exact age of the tree remains the subject of debate, with many locals speculating that its ancient bark actually dates back to Charlemagne’s reign in the 8th century. The spiral staircase around the trunk provides access to the two chapels.

It wasn’t until the 1600s that this tree gained biblical status. Hailed as a blessing in disguise, a lightning strike hollowed out the trunk and the charred remains quickly drew the attention of Abbot du Détroit and village priest Du Cerceau. They claimed that the event happened ‘with holy purpose’ and deemed the tree ‘miraculous’, placing a shrine to the Virgin Mary in the hollow.

However, the tree hasn’t always been adored like it is today. During the French Revolution, for example, it became a symbol of the old system of governance and tyranny. It attracted an angry crowd who were intent on burning it to the ground. Thankfully, a local renamed the tree ‘The Temple of Reason’, encouraging the crowd to see it as a symbol of modern thinking that meant the tree was spared.

Twice each year, mass is celebrated inside the oak tree, as it still functions like any other chapel. It’s also the site of a pilgrimage on August 15, drawing crowds from across France and beyond.