The History of the Delicious Macaron 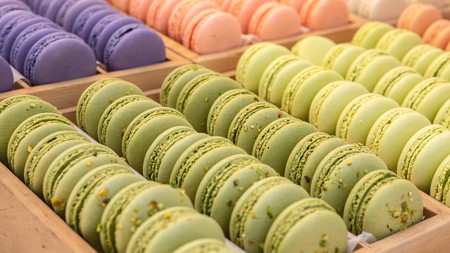 Colourful, pillowy and delicate, macarons are one of the most treasured desserts in France. These meringue-based sweets may now be a near art form – just visit Ladurée or Pierre Hermé pâtisseries in Paris – but they were not always so glamorous. Ever wondered how the macaron came to be? Read on to find out.

Who invented the macaron?

First things first, macarons are not to be confused with macaroons. Macaroons are small and slapdash coconut haystacks, and are often dipped in chocolate.

Macarons are elegant little sandwiches that are made with meringue, almond flour and buttercream filling.

The first known appearance of the macaron in Europe was during the Middle Ages. At the time, it was a small sweet made of almonds, egg white and sugar, and was crunchy on the outside and soft inside. Even though the French are often given credit for the macaron, Catherine de’ Medici likely brought the maccherone to France in the 1500s from Italy, where it had been produced in Venetian monasteries since the 8th century. Back then, they were rather humbly called “priests’ bellybuttons” due to the shape of the pastry.

Nevertheless, France is where the confection became popular. The first written macaron recipe appeared in France in the 17th century, with a number of versions emerging since.

How the macaron became popular

In 1792, two Carmelite nuns in Nancy, who became known as the Macaron Sisters, baked and sold the sweets to survive during the French Revolution. In 1952, Nancy honoured the pair by renaming the spot where they produced the macarons after them. Over time, different regions in France adopted the recipe as a local specialty.

However, the macaron as we know it now (with two meringue cookies brought together by a light, flavoured filling) was a creation of the French capital. In the 1830s, Parisian confectioners introduced the world to the macaron parisien. The recipe was popularised by pâtisserie Ladurée, a company created in 1862 by Louis-Ernest Ladurée, a gentleman who clearly knew how to make a great sweet.

The macaron has endured a never-ending process of reinvention and an unceasing emergence of new flavours and colours. At the beginning of the 21st century, confectioners started offering macarons with a difference in flavour between filling and cookie. Recently, pastry chefs have been revamping the traditional recipes using savoury inspirations (basil mint or Thai curry, anyone?).

The sweet has since spread across the world, thanks in part to Sofia Coppola‘s 2006 film Marie Antoinette, in which the queen is surrounded by luscious pyramids of multicoloured macarons (which were provided by Ladurée). The macaron has since experienced a surge in popularity in North America and Asia.

Last but not least, the macaron has a special day of the year: 20 March. It was introduced in 2005 by Pierre Hermé, another famous French confectionary house. On Macaron Day, participating macaron shops offer free samples to their customers. Save the date.