The Best Markets in Paris: From Flowers to Food 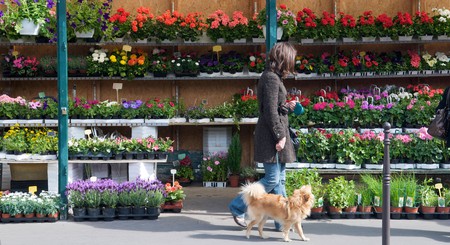 As far as shopping goes in Paris, some of the best finds and hard-won bargains can be found at one of the city’s many markets. Whether you’re looking for food, clothes or accessories, you’re bound to find it at the best markets in Paris.

They seem to be ephemeral, popping up magically overnight for a few days before shutting down until the next appointed rendezvous. In fact, some of the oldest existing markets in France have been run this way, operating only for a few days each week – or even each year. 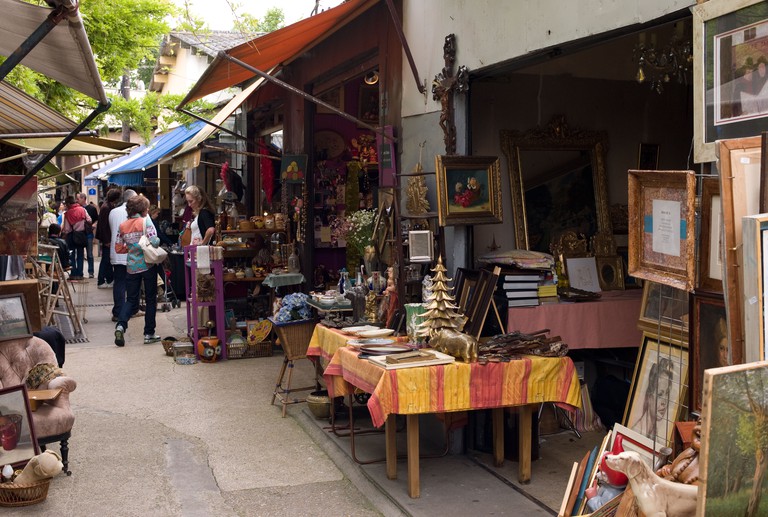 Paris’s flea markets, or marché aux puce as they’re called in French, are some of the most famous in the world. The one at Saint-Ouen is the world’s largest and oldest; established officially in 1885, it stretches over seven hectares and is home to over 2,000 stalls. The marketplace itself is actually a group of many smaller markets, roughly categorised into three themes: vintage and antiques, clothing, and professional markets (which are closed to the public). Haggling is expected here, however, a little bit of French will go a long way, as will a smile.

Open In Google Maps
Saint-Ouen, Île-de-France, 93400, France
Give us feedback

Gastronomes and gourmands will love Rungis. It’s the largest fresh produce market in the world, covering 234 hectares just outside of Paris. At over 2,000 years old, it’s also one of the oldest continuously run markets in the world. It is the modern incarnation of the ancient Parisian marketplace that used to sit on the site of the Les Halles commercial centre near Rue Montorgueil. It’s split into five individual sections: dairy and gourmet products, meat products, seafood, freshwater products, fruits and vegetables, and horticulture and decoration. Visitors are welcome, however, they are strictly limited to authorised guided tours. 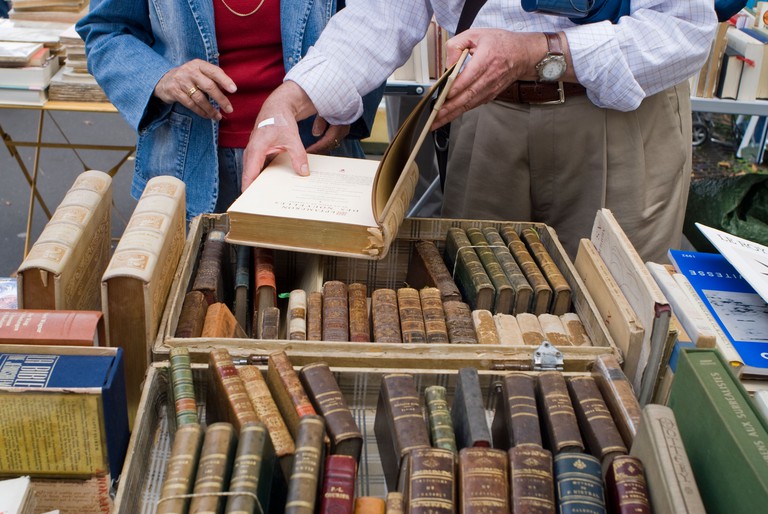 Le Marché du Livre – or the book market – is a specialty marketplace dedicated to antique and second-hand books. Open every weekend, it’s a must-visit for bibliophiles and book lovers. Around 50 booksellers make up the market, specialising in everything from antique, out-of-print editions to contemporary, modern tomes. The market regularly posts rare, unusual, or highly priced books on their website, and often organises events with literary critics, experts, and authors. As far as markets go, it’s also one of the most photogenic that you’ll find in Paris! 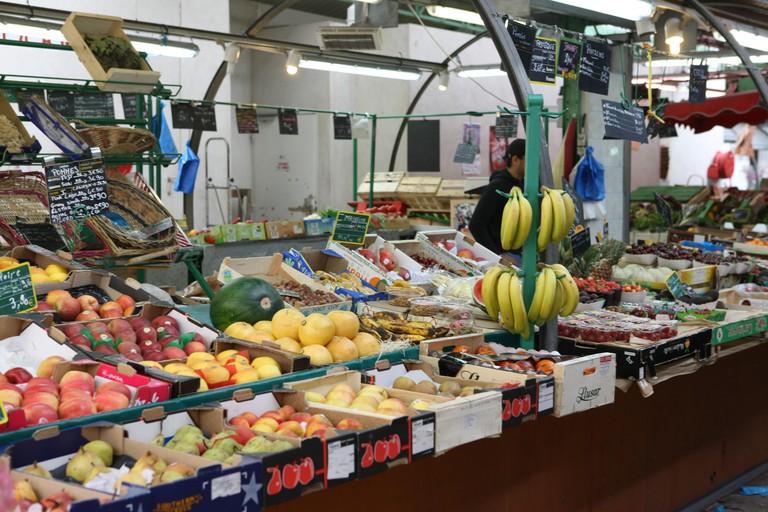 Marché des Enfants Rouges 39 Rue de Bretagne was established in 1618 | © Photo 12 / Alamy Stock Photo
This tiny marketplace is a favourite among locals and tourists alike. Created in 1618, it’s the oldest covered marketplace in Paris. The name comes from the nearby orphanage, l’Hospice des Enfants-Rouges, so-called after the red uniforms that were provided to and worn by the children. Twenty traders gather every Tuesday to Sunday to man their fresh produce stalls. There are several restaurants on-site, including the particularly popular Du Pain et des Crêpes (the line can often take 40 minutes on weekends), and some truly tasty manouche from the Lebanese traiteur.
Open In Google Maps
39 Rue de Bretagne, Paris, 75003, France
Visit Website
Give us feedback 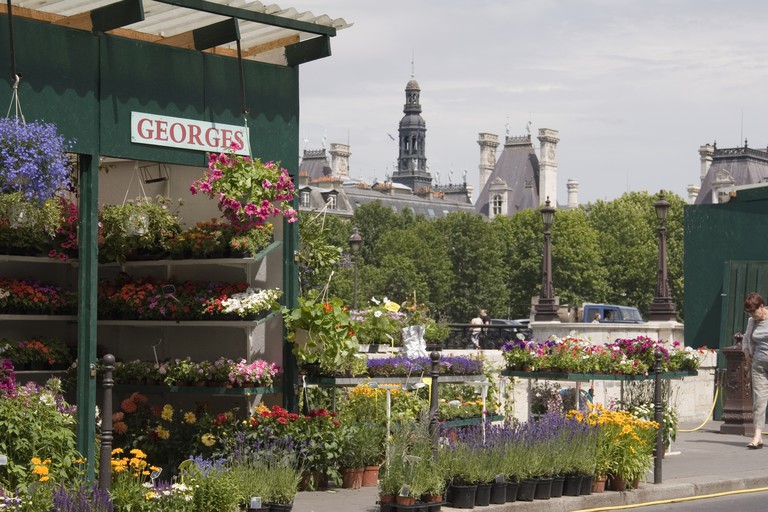 Marche aux Fleurs flower market, Paris | © Chuck Pefley / Alamy Stock Photo
Since 1830, this tiny oasis in the middle of l’Ile de la Cite has been attracting green thumbs from all over the world. The metal and glass pavilions lend an old-world feeling to the stalls, which are stocked floor-to-ceiling with plants of all varieties: from flowering shrubs to tropical plants stored in the on-site hothouses with a red and yellow neon glow. Each pavilion contains several stores without clear boundaries, and it’s easy to accidentally cross from one store to another. The best way to organise your visit is to wander slowly through the market, taking note of any potential purchases before returning for each item – accidental thievery is much too easy here!
Open In Google Maps
Allée Célestin Hennion, Paris, Île-de-France, 75004, France
Visit Website
Give us feedback 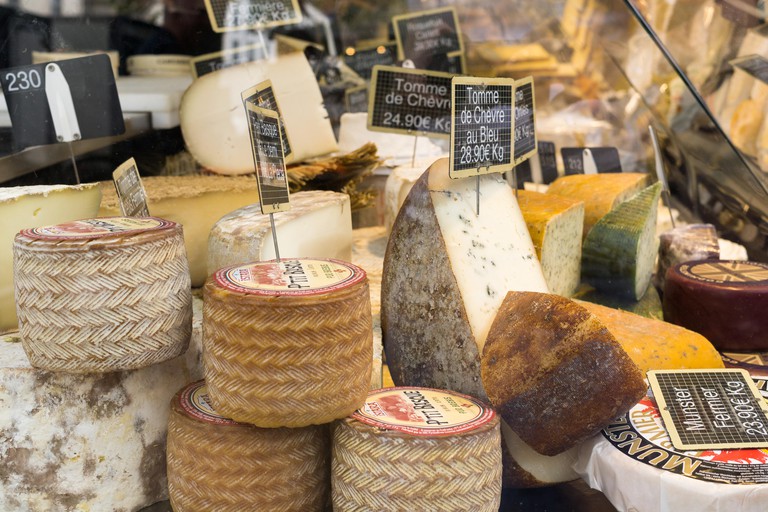 Pick up some cheese at the Marché Bastille | © Soma / Alamy Stock Photo
If you only have time to visit one market in Paris, make it Le Marché Bastille. Open every Thursday and Sunday until 3pm, this is the biggest public market in Paris with over 100 stalls of fresh French produce, including bread, fresh fruits and vegetables, seafood, meats, and international groceries sold directly by their producers. Every few stalls there is a traiteur, a takeaway food stall cooking a variety of cuisines fresh from all over the world. You’ll also find a few non-food stalls selling leather goods, cooking and kitchen supplies, artworks, and antiques.
Open In Google Maps
8 Boulevard Richard Lenoir, Paris, Île-de-France, 75011, France
+33143247439
Visit Website
Give us feedback

Every other month, l’Hôtel Bohème in the 11th arrondissement opens its doors to ecstatic customers. The market, which was established for creators, is usually only accessed online, making it a desirable spot. The team behind the concept consider themselves to be talent scouts of a kind, with strict requirements designed to showcase only the very best. Around 40 designers are showcased at each market, specialising in fashion, jewellery, textiles, and even lingerie and cosmetics. The tea room in the heart of the venue brings a conviviality to the space, and the mini creche with creative workshops designed for little hands allows parents and caregivers a moment of respite to enjoy child-free browsing.

Hidden away in the streets of the Marais is a tiny town within the big city, a maze of paved courtyards that contains Le Village de Saint-Paul. With several subtly marked archways that lead into the main square, the village is quiet, an alluring little oasis of vintage and antique shops, art galleries, and a charming flea market popular with those who know their stuff. The best day to visit is Sunday when all the exhibitors are set up and the terraces lining the marketplace welcome visitors laden with wrapped packages and full bags. During warm weather, these restaurants set up tables and chairs outside so patrons can enjoy un bain de soleil with some nibbles and a cool drink.