Re-Creating Paris With the Cast of ‘Fantastic Beasts: The Crimes of Grindelwald’

The second instalment of ‘Fantastic Beasts’ moves the action to Paris | Courtesy of Warner Bros. Pictures

The second instalment of the Fantastic Beasts saga sees the magical action move from New York to Paris. We speak with the cast about how the movie manages to re-create one of the most beautiful cities in the world.

Just like with the first Fantastic Beasts movie, The Crimes of Grindelwald was shot predominantly at a studio in Leavesden, England, but this time the sets were used to re-create Paris. There were also a handful of scenes that took place in London, but these too were shot in the Warner Bros. studio in Leavesden. 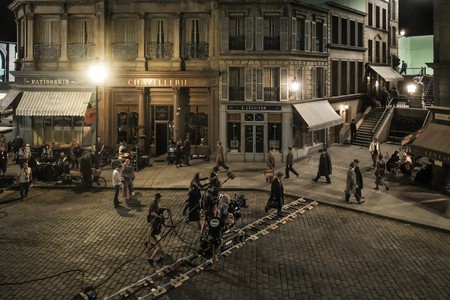 Most of the scenes in ‘Crimes of Grindelwald’ were shot at a studio in Leavesden, England | Jaap Buitendijk © 2018 Warner Bros. Entertainment Inc.

Jude Law, who joins the series as a younger version of Dumbledore, explains what it was like to film these scenes, while Eddie Redmayne, who reprises the starring role of Newt Scamander, highlights the amazing detail that went into transporting the Harry Potter world to France.

As The Crimes of Grindelwald opens, we discover that the hunt for powerful wizard Credence Barebone is still ongoing. Barebone (played by Ezra Miller) was last seen destroying a large portion of New York and was believed to be deceased. However, it’s clear to see that the evil sorcerer is very much alive… if not all that well.

The eponymous Grindelwald is played by Johnny Depp, who escapes from detention and sets off to find Barebone and use him for his own malevolent purposes.

Miller and newcomer Claudia Kim talk to Culture Trip about the emotional journeys of their characters, as well as the experience of bringing Paris to life.

Elsewhere in the movie, we see the return of Jacob Kowalski and Queenie. Dan Fogler and Alison Sudol speak to Culture Trip about their on-screen relationship and what it was like to portray some real-life, relatable emotion at the heart of such a fantastical film.

Also joining the cast for this instalment is Callum Turner, who takes on the role of Newt’s more ambitious brother.

Three more films are planned for this series, and with New York, London and Paris ticked off the list, we’re left wondering where the world of Fantastic Beasts will take us next…

Fantastic Beasts: The Crimes of Grindelwald is out now