How Paris Got Its Nickname, ‘The City of Light’ 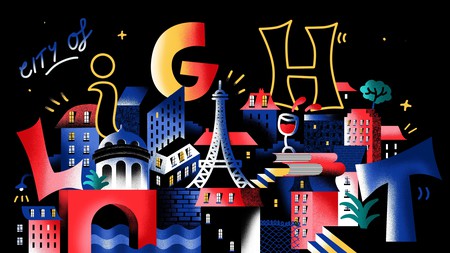 Paris is no stranger to nicknames, ‘Lutèce’, ‘Paname’, ‘Pantruche’ and even ‘the City of Light’. But have you ever wondered why? The reasons behind this sparkling nickname are a lot more different than you might expect.

There are many misconceptions about the ‘City of Light’ nickname

Before moving forward, let’s tackle any misconceptions about the aforementioned nickname. Most people assume that Paris is called ‘The City of Light’ because of its dazzling boulevards and bridges, and it’s easy to see why.

Today, there are over 296 illuminated sites in Paris, if you count everything from hotels and churches, statues and fountains, national buildings and monuments, and out of 37 major bridges in Paris, an impressive 33 of them are illuminated to full glory each sunset.

The city is especially well illuminated during the festive season, when over 2.4km of lights stretch from the Place de la Concorde right down to the Arc de Triomphe. It’s made even brighter with its 450 decorated trees along the avenue and on the pavement.

However, it’s Paris’s most famous landmark, the glittering Eiffel Tower, that’s mainly to blame for the misinterpretation. The monument shines like a beacon each night with 40km of illuminated garlands made up of 20,000 light bulbs.

How Paris really came to be called ‘The City of Light’

The real reason for the city’s name actually stems from the mid-17th century, when Louis XIV, otherwise known as Louis the Great (Louis le Grand) or the Sun King (Roi Soleil), was on the throne. After a prolonged period of war and domestic civil strife, the king was committed to restoring the public’s faith in law and order.

On March 15, 1667, Louis XIV made Gabriel Nicolas de la Reynie the Lieutenant General of Police, entrusting him with the task of making Paris more safe. In addition to quadrupling the number of policemen in the city, one of the measures was to install more lighting. Lanterns were placed on almost every main street and residents were asked to light their windows with candles and oil lamps. The idea was to prevent lawbreakers from dodging the police or hiding in dark alleys, therefore reducing the crime rate. From here on, the city gained the nickname La Ville-Lumière (‘The City of Light’).

At the time, Paris was one of the first European cities to adopt street lighting, but the nickname really gained the most traction during the Age of Enlightenment that followed.

Whilst some historians date the Age of Enlightenment between 1715 (the year that Louis XIV died) and 1789 (the beginning of the French Revolution), others say the movement was already present in Paris from the 1620s with the start of the scientific revolution.

From the late 18th century to the 19th century, the city of Paris became increasingly known as a centre of education and ideas throughout the whole of Europe, inspiring poets, philosophers, engineers and scientists galore. As well as the gradual increase in wattage, this context of innovation and enlightenment is what helped reinforce the symbolic significance of Paris as ‘The City of Light’.