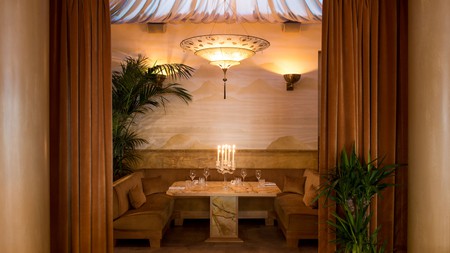 French food culture runs deeper than croissants and steak frites. We have curated these hotels in Paris so that you won’t just discover classic brasseries and tourist haunts but also neighbourhood neo-bistros, traditional traiteurs (takeaway establishments) and no-frills Michelin-star restaurants. Here’s our pick of the best – bookable with Culture Trip.

Food is central to Parisian life, but the best gourmet experiences aren’t just found in fine-dining restaurants and the boutiques of celebrity pâtissiers (pastry chefs). These hand-picked spots will place you in neighbourhoods with graffiti-scrawled vans that open their doors on market day to stack trestle tables with artichokes, garlic and heirloom tomatoes, blow-the-budget restaurants where locals really eat and streets where you’ll find classic corner brasseries and crêperies alongside Syrian cafes and tiny udon joints. Bon appétit! 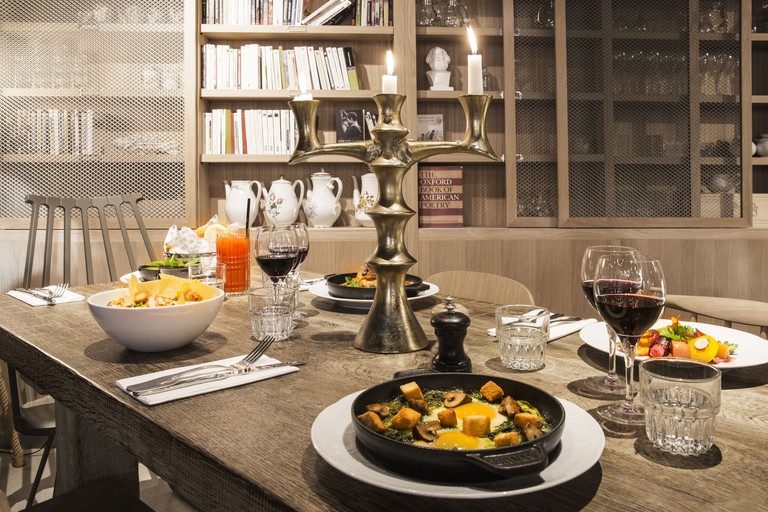 Great neighbourhoods for dining in Paris are no longer just inside the Boulevard Périphérique that surrounds the city centre. Head to Saint-Ouen in the suburbs, where you can visit the famous Marché aux Puces (flea market) before settling into the Parisian outpost of Brooklyn-born Mob group. This super-cool, affordable hotel does on-site dining with a difference – and a conscience. Ingredients for the veg-centric menu (still a rarity in France) are sourced locally and from organic co-ops wherever possible. In summer, it’s worth staying for its outdoor barbecues alone. 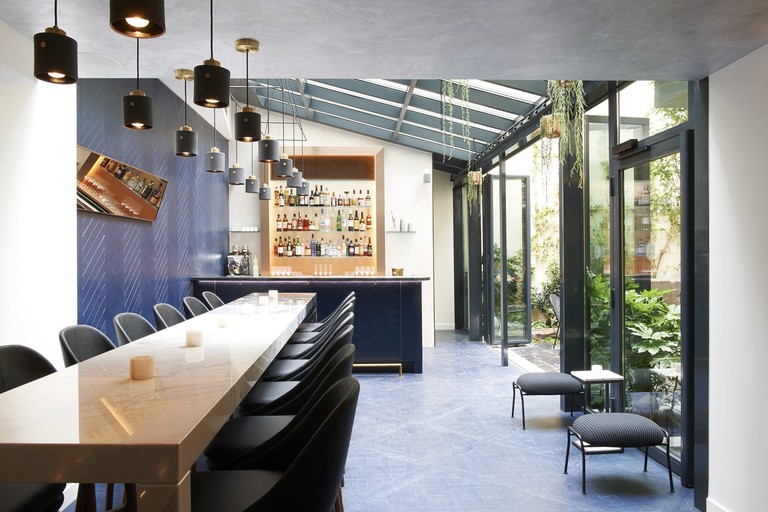 Looking for serious cocktails and fine dining? Head for Parisian pied-à-terre Amastan, just off the Champs-Élysées. Once you’ve sipped a cherry-infused gin and tonic in the hotel’s celebrated cocktail bar, Anouk, head out in search of culinary enlightenment. Five Michelin-star restaurants are within a 10-minute walk; try L’Arôme, where Thomas Boullault’s tasting menus famously feature wild turbot in a coffee sauce. For something a little more relaxed, nearby bar-restaurant Le Mermoz was one of the first places to bring natural wine and small plates to this side of Paris. 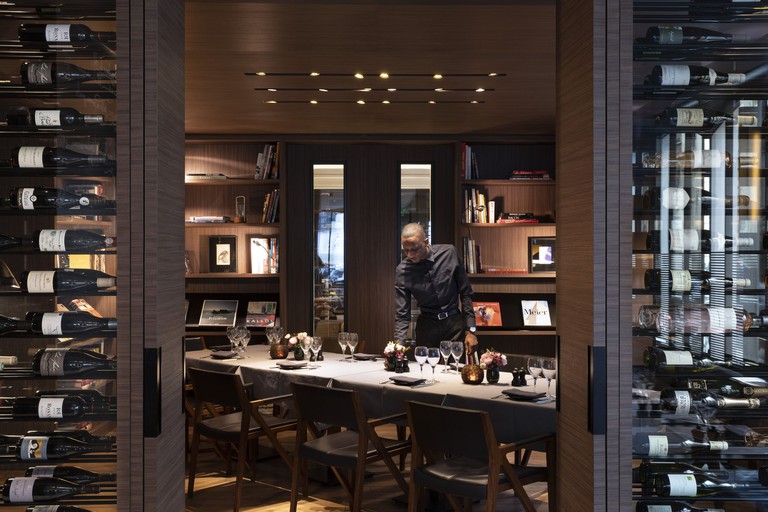 Business-chic boutique Hôtel de Nell has an unbeatable location for exploring the 9th and 10th arrondissements. At least one of your meals should be in the hotel restaurant, where the service might be fitting for a five-star establishment, but a perfectly executed three-course menu comes at a reasonable price. Having meze at Le Daily Syrien is another must while you’re in town. Time to spare? Take a walk to picturesque Rue des Martyrs for a quintessentially Parisian experience, and stop to pick up everything from organic cookie mixes at Marlette to fruit-laden pavlovas at La Meringaie Martyrs. 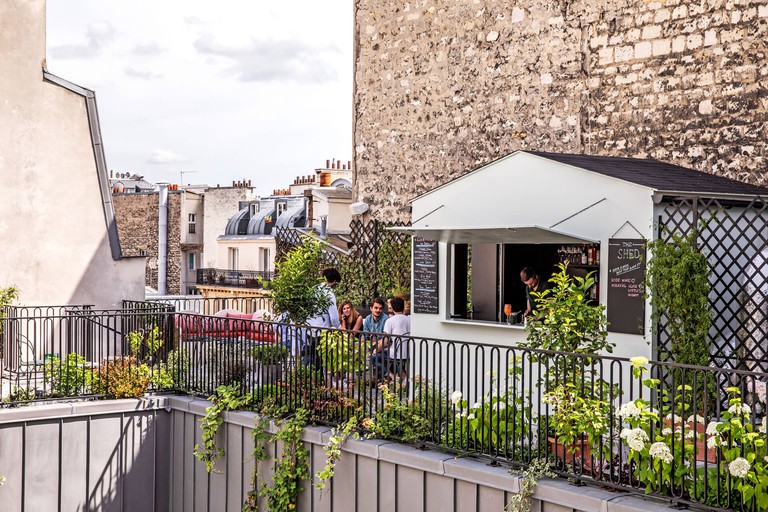 Run by the Experimental Group (hospitality royalty that’s also behind La Compagnie des Vins Surnaturels in London), this uber-central townhouse hotel celebrates French style with Italian passion. Chef Giovanni Passerini heads up the Grand Restaurant, where his spin on Franco-Italian country cooking runs the gamut from beef tartare with smoked ricotta to linguini with calamari. There are also two superb cocktail bars on-site: the whimsical Shell and the Shed, a summer-only rooftop spot. If you need even more marvellous mixology, Le Syndicat, officially one of the World’s 50 Best Bars, is just around the corner. 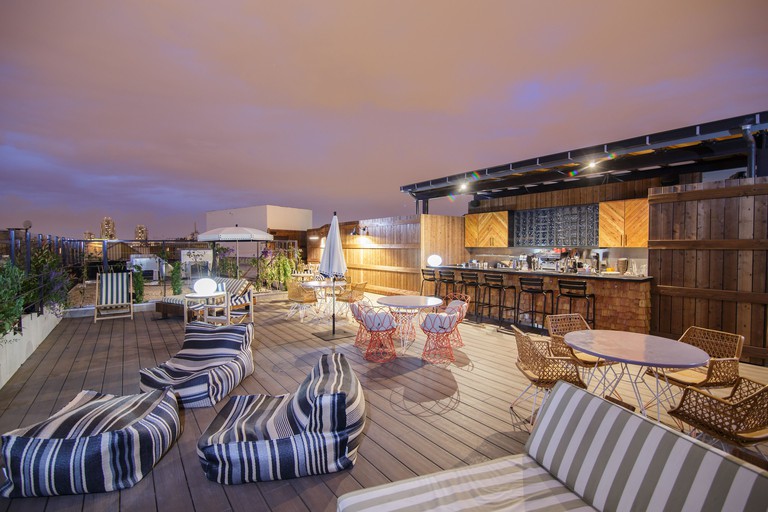 Few hostels have a rooftop with Sacré-Cœur views so spectacular it gets booked out for private events, but Generator doesn’t fit the budget-travel mould. Rooftop rosé at apéro hour aside, this flashpacking option is a budget-conscious foodie’s dream. Take a short stroll to the Canal Saint-Martin to visit cult bakeries Du Pain et des Idées and Boulangerie Utopie for flaky croissants, followed by rustic lunch dishes at Le Verre Volé’s Formica tables. Walk in the other direction for superb pho, dim sum and Korean hotpot around Belleville’s Chinatown. 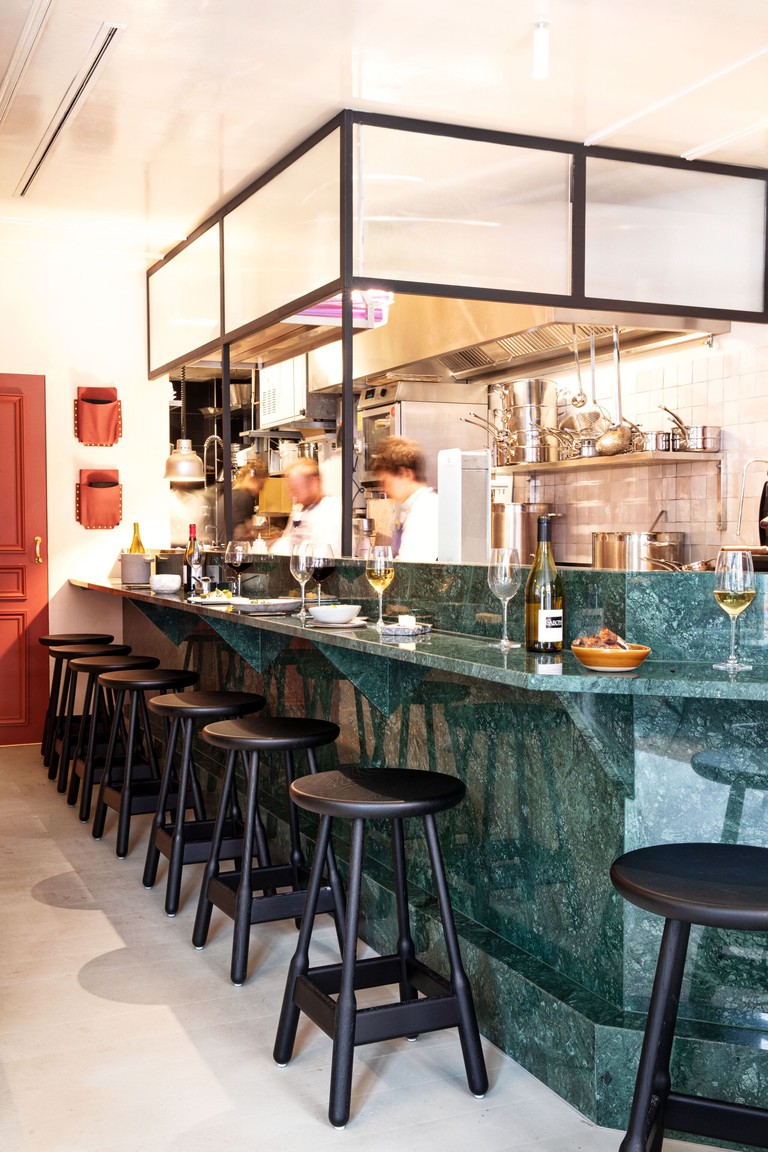 Another creation from the ever-inventive Experimental Group, this classy boutique hotel has some serious pedigree. If you can bear to leave the Dorothée Meilichzon-designed rooms, a negroni in the ground-floor cocktail bar is the perfect way to start an evening exploring Pigalle’s restaurant scene. In the past few years, some of the most exciting places in the city have opened here, with the budget-friendly brasserie Bouillon Pigalle and too-cool-for-school Italian trattoria Pink Mamma among them. Alternatively, see if you can score a table at the smash-hit Israeli restaurant Balagan, a 25-minute walk away. 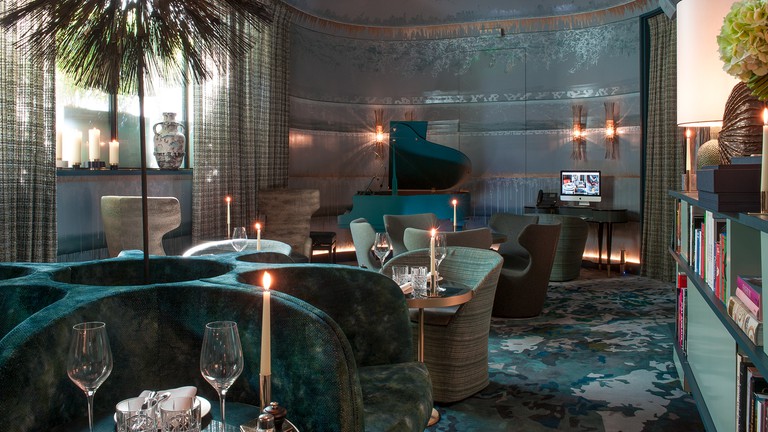 No luxury is spared at the Nolinski Paris, just a short walk from the Palais Garnier, the Louvre and the Palais Royal. The hotel’s Nolinski Le Restaurant is helmed by Philip Chronopoulos, who runs nearby Michelin-star Palais Royal Restaurant. Expect creative cuisine with Mediterranean accents. The dimly lit cocktail bar also serves up delectable snacks – from mini foie-gras brioche burgers to truffle pizzetta. Those in the know will also wander down the adjacent Rue Sainte-Anne, the heart of Paris’s Little Tokyo, where you’ll find great udon, okonomiyaki, ramen and more. 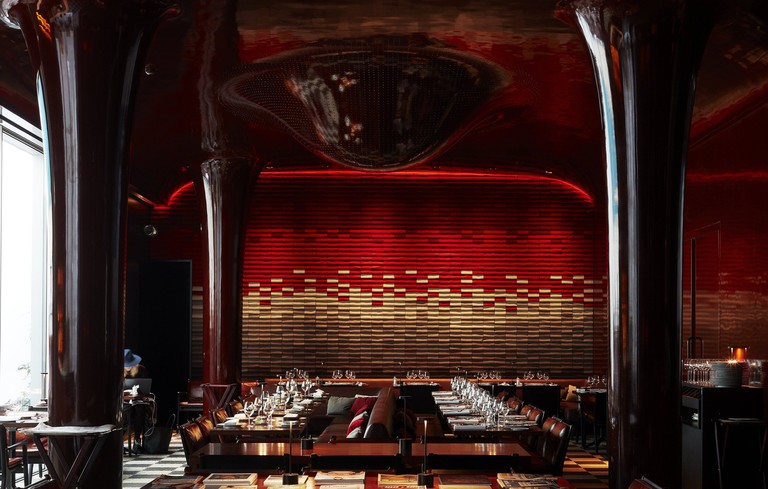 If your idea of a foodie pilgrimage is following in the footsteps of Andy Warhol, David Bowie and Mick Jagger, book into Les Bains. This epicentre of the ’80s club scene was reborn as an uber-glitzy club and hotel. In the sultry Brazilian restaurant Roxo, chef Bruno Grossi (who has worked with Marcus Wareing and Guy Savoy) devises sharing plates perfect for see-and-be-seen snacking – perhaps broccolini with ponzu dressing, tuna tataki or quail with baba ganoush. After a night out, there’s no better way to shake off a hangover than with crêpes at the nearby Marché des Enfants Rouges – the heart of the food scene in the hip Marais area. 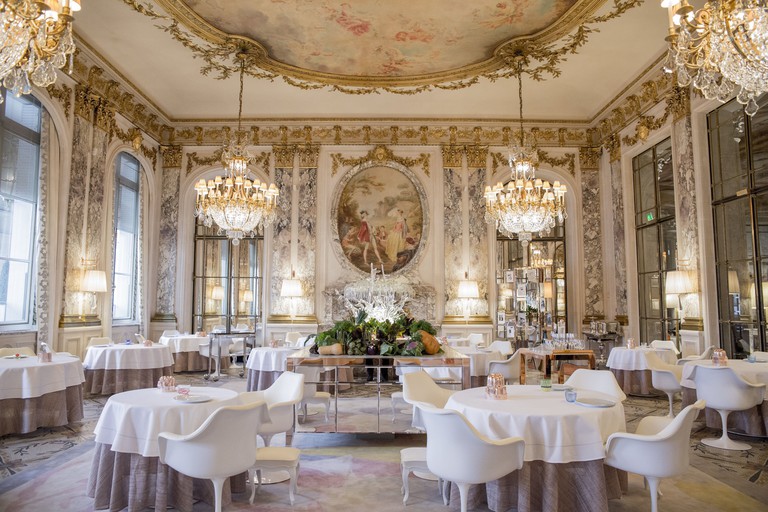 Considered one of the most famous hotels in Paris, Le Meurice has been frequented by notable guests over the years, including Salvador Dalí, Andy Warhol and Bob Dylan. The hotel’s extravagant in-house restaurant is fronted by multiple Michelin-star chef Alain Ducasse, with the award-winning Cédric Grolet serving as the hotel’s executive pastry chef. Dining at Le Meurice is a memorable experience, with a menu featuring a fascinating reimaging of traditional haute cuisine. 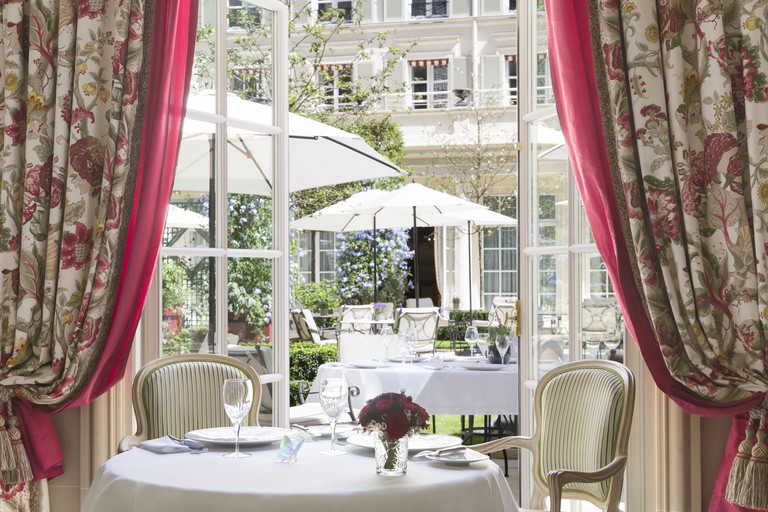 Welcoming guests for nearly 100 years, Le Bristol Paris is a wonderful mix of the city’s classic charm and the modern conveniences of a contemporary hotel experience. Head chef Eric Frechon has overseen the hotel’s restaurant, Epicure, for the past 20 years. It holds a whopping three Michelin stars for its typical French cuisine, while the chic 114 Faubourg holds another. 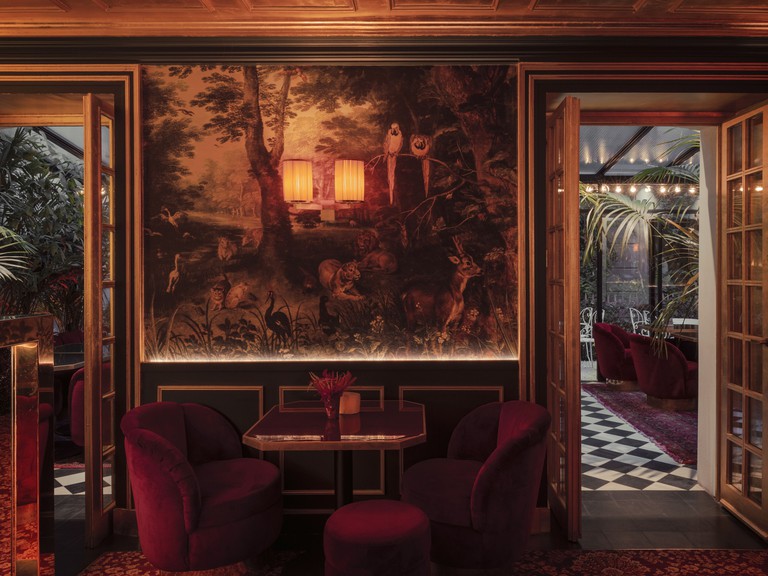 Hôtel Particulier Montmartre is one of the smallest hotels on our list, but what it lacks in size, it more than makes up for with its sleek aesthetic and exceptional dining experience. Head chef Gabriele Faiella uses only the freshest ingredients in the Grand Salon’s seasonal menus – the Sunday brunch here is an absolute must-try. 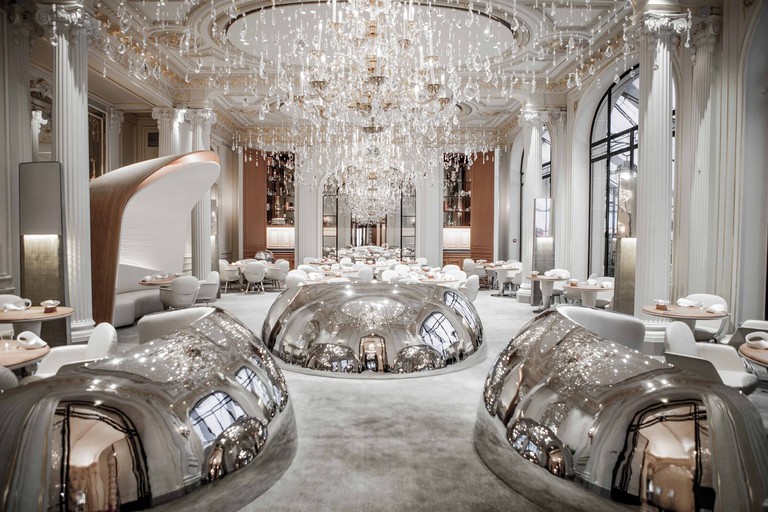 First opening its doors in 1913, the Hôtel Plaza Athénée still has the lavish interiors you would expect from one of the few palace hotels in Paris. Alongside Le Meurice, Alain Ducasse also oversees the three-Michelin-star restaurant here, run by executive chef Romain Meder. He takes a natural approach to the menu, with most of the sustainably sourced ingredients taken straight from the queen’s garden on the grounds of Château de Versailles. 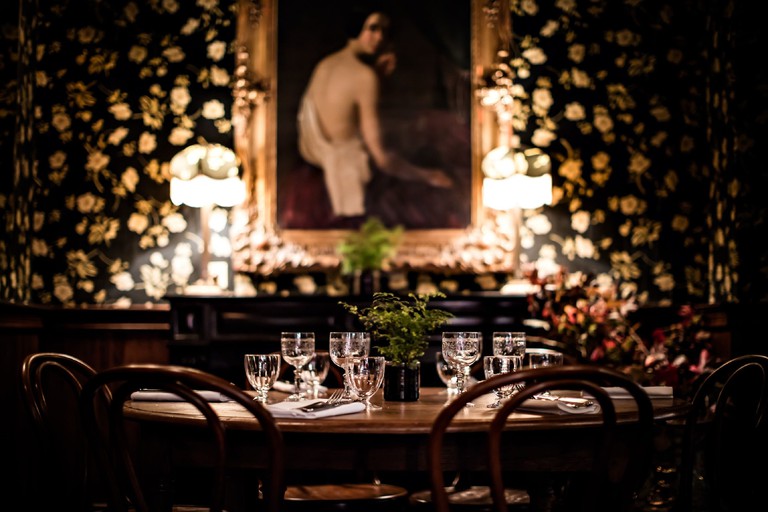 Courtesy of Hôtel Providence Paris / Expedia
Found close to Paris’s lively theatre district near Porte Saint-Martin, the Hôtel Providence, sitting inside a building from 1854, provides the quintessential Parisian experience to its guests. Each room has a classical design, with mosaic walls, rich velvets and even an in-room bar, complete with a cocktail set. On the ground floor, the in-house restaurant serves a delicious range of world-inspired dishes cooked in a traditional wood-fired oven. Stop by the garden terrace for an after-meal espresso.
Open In Google Maps
90 Rue René Boulanger, Paris, Île-de-France, 75010, France
+33146343404
Visit Website
Give us feedback 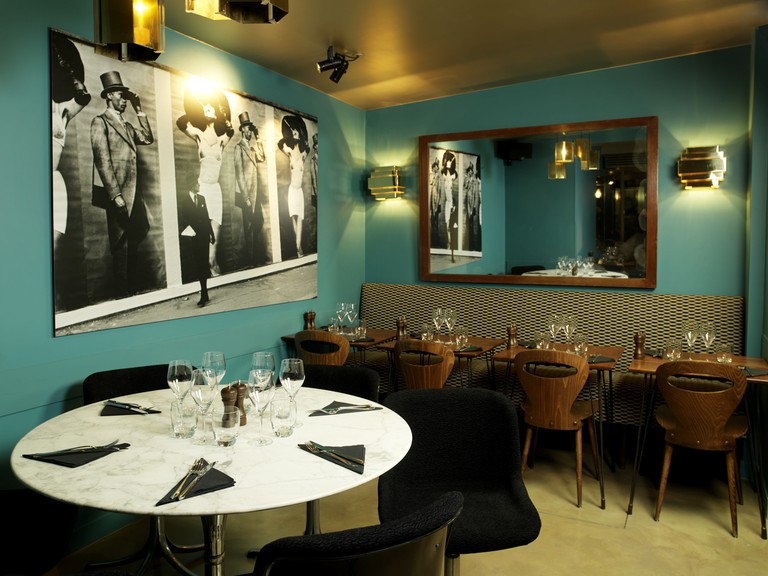 Overlooking a quaint wooded square, the Hotel and Restaurant Edgar is a quirky property in central Paris. Once a former workshop, it was lovingly restored by owner Guillaume Rouget-Luchaire. Each vibrant guest room is centred around a theme, including the Elegant Sixties, Cocoon and In the Mood for Love. Across the road, the Edgar opened an Italian bistro, Barretto di Edgar, serving excellent authentic pizzas with various toppings, including burrata and truffle.