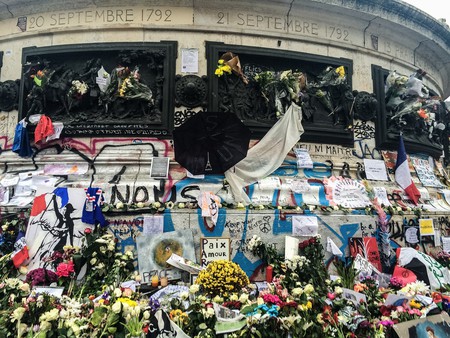 The Mairie de Paris cleaned the statue of Marianne in the Place de la République, in a 10-day operation that occurred in August 2016. In doing so, they have removed the densely layered graffiti, posters, flowers, and candles which formed a temporary shrine to the victims of terrorism in the French capital and across the country since January 2015.

The famous square located between the 3rd, 10th and 11th arrondissements became a center of memorialization following the attacks on the Charlie Hebdo offices, a police officer in Montrouge, and a kosher supermarket in Porte de Vincennes at the beginning of last year that claimed the lives of 17 people. On Jan. 11, 2015, two million people marched through the city streets, passing by Marianne — a French national symbol of liberty and reason — in a show of solidarity and support of free speech.

The square continued to be the unofficial site of mourning in the aftermath of the November 13th attacks, where the city lost the lives of 130 people between the Bataclan concert hall, terrace restaurants and cafés, and the Stade de France. In the following months, residents and visitors alike laid tributes in their thousands.

Nevertheless, perhaps due simply to the passage of time or perhaps in response to the square being adopted as a site of demonstration for activists campaigning against French labor reforms, the so-called Nuit Debout movement, the city council decided to restore the monument to its pre-attack state earlier this year. The work was undertaken by workers and technicians from the Direction de la propreté et de l’eau (Department of Cleanliness and Water) and restoration experts. They used power hoses and other techniques to clean the stonework and bronze statues and reliefs which make up the statue.

All of the tributes, many of which have survived almost two years out in the elements, were collected and will be stored in the city’s archives. The most poignant of these will be displayed at the Musée Carnavelet, which is dedicated to the city’s history.

Those who still wish to pay their respects can continue to do so at the memorial oak tree in the Place de la République in January 2016 — planted to commemorate the first anniversary of the initial wave of attacks in Paris.