In The Footsteps Of The Flâneur: A Literary Tour Of Paris

Paris is the literary city par excellence, its fabled avenues, bars and bistros having long provided shelter and inspiration for writers. Whether it’s fin de siècle figures or foreign writers who came to Paris to escape the stifling conformity of their worlds, all have reimagined Paris in their works, endowing the city with the lustre and profundity it still possesses. 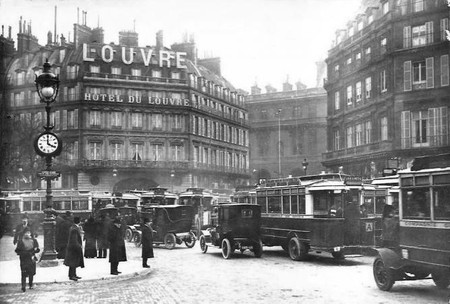 It was in Paris that the figure of the flâneur was created, the prototypical modern individual who wanders the labyrinthine urban sprawl, navigating through the morass of human existence. This figure first appeared in the scandalous poetry of Baudelaire, who found in Paris both a muse and a means for depravity. Baudelaire paved the way for other writers who would find both inspiration and shelter in the Parisian streets, from French icons such as Zola, Rimbaud and Proust, to expat writers like Hemingway, Gertrude Stein, Fitzgerald, Joyce and Beckett. Their literary struggles, lives and deaths are traced throughout the city streets, as literary travelers can still discover. 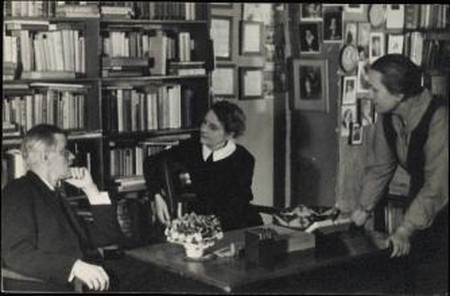 There are few bookshops with as much literary and cultural significance as Shakespeare and Company, which has become a Left Bank institution over the course of its long history. The original incarnation of the legendary bookshop was opened by American expat Sylvia Beach in 1919 at 8 rue Dupuytren, before moving to a larger location at 12 rue de l’Odéon in 1921. Beach’s shop opened on the cusp of a literary and artistic explosion in Paris and the expat writers who flocked to Paris would find a second home in Shakespeare and Company. The store was regularly visited by such luminaries as Hemingway, Joyce, F. Scott Fitzgerald, Ezra Pound and Gertrude Stein, and Joyce’s Ulysses was published by Beach after he had failed to find an English publisher. The original store closed in 1940 but a new incarnation was opened by George Whitman in 1951 at 37 rue de la Bûcherie. This store has remained true to the roots of the original bookshop. Whitman’s daughter Sylvia Beach Whitman now runs this indispensable part of literary Paris, which resounds with the unique history of this city. 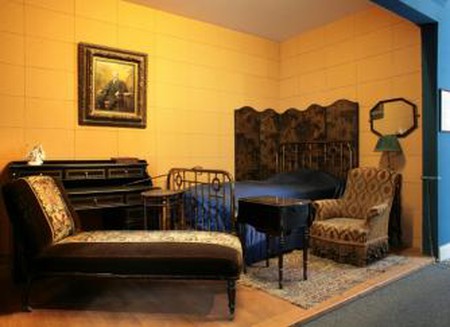 Marcel Proust’s magnum opus A la recherche du temps perdu is a beautiful evocation of the vagaries of memory and an elegy for lost youth. The seven volumes of this work record the recollections of a younger life seen through the prism of bitter old age and tangible regret. This deeply autobiographical work is an expression of Proust’s own anxieties about the course of his life. He famously spent the last few years of his life in a cork lined room, to alleviate his highly sensitive lungs, and as a means of absorbing the noise and confusion of the outside world. This room has been recreated in the Musée Carnavalet using furniture from Proust’s original bedroom, including his bed and writing equipment, which he used to compose the last volumes of A la recherche du temps perdu. The cocoon like atmosphere in this room offers a unique insight into the late life and mentality of one of the greatest French writers 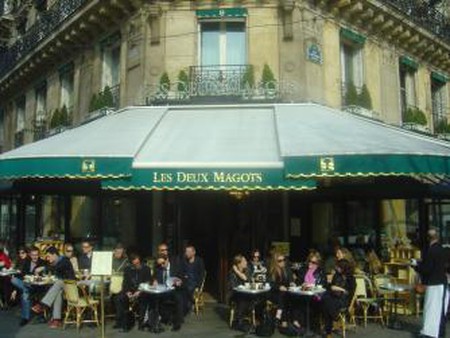 Part of the charm of Paris for writers was its nightlife; this was a city of legendary debauchery and depravity and the writers who lived here found solace and sustenance in its bars. Hemingway’s famous absinthe fuelled drinking habits in particular have inspired a host of imitators and have given an excuse for bars throughout the city to claim that Ernest once got drunk at their establishment. One bar which can claim to have hosted most of the literary icons of Paris home is Les Deux Magots, the Saint-Germain-des-Prés bar which opened in 1912. The bar has served drinks to Verlaine and Rimbaud in the late 19th century, Hemingway, Breton and Picasso in the 1920s and Camus, Sarte and de Beauvoir in the 1950s. Such a literary and artistic heritage is unrivalled even in Paris, and the café’s links to both the Surrealist movement and the Existentialist movement are celebrated. The nearby Café de Flore is another historic literary hang out, and the two compete for both customers and historical kudos. 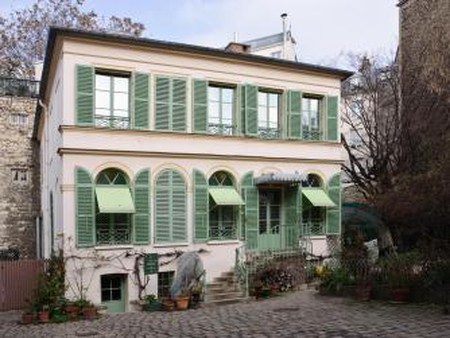 The most prominent female novelist of the 19th century, George Sand, whose real name was Amantine Lucile Aurore Dupin, is celebrated for her extensive literary legacy but is best known for her tumultuous personal life. Her bisexuality, cross dressing and love affairs made her a pioneering figure but also brought her unwanted notoriety. A floor of the Musée de la Vie Romantique, at 16 rue Chaptal in Monmartre, is devoted to this fascinating figure and has collected a variety of her possessions including family portraits, furniture, jewellery and memorabilia. The building was once home to Ary Scheffer who would hold salons attended by famous artists and writers, and Sand was often present with her then partner Frédéric Chopin; plaster casts can be seen Musée de la Vie Romantique in a somewhat ghostly remembrance of their lives. 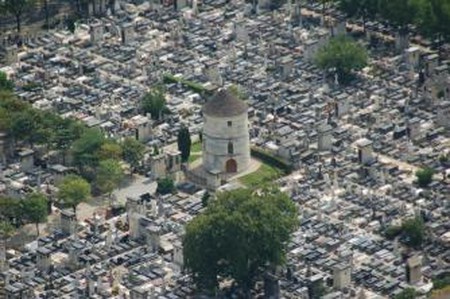 Paris’ cemeteries are surreal places in which mourners often have to contend with crowds of tourists looking for the graves of literary, artistic or musical icons. The Cimetière de Montparnasse is one of the most significant as it holds the graves of Samuel Beckett, Jean-Paul Sartre and Simone de Beauvoir, as well as those of writers and artists such as Marguerite Duras, Joris-Karl Huysmans, Carlos Fuentes, Julio Cortázar, Guy de Maupassant, Susan Sontag, Serge Gainsborough, Man Ray, Tristan Tzara and Charles Baudelaire, for whom an impressive tomb has been erected. The cemetery is thus the site of many literary pilgrimages and the graves of these writers and artists are rarely ever lacking in adornments. Montmartre Cemetery and Père Lachaise Cemetery also hold the graves of various cultural luminaries and allow admirers a sorrowful, but profound, form of remembrance. 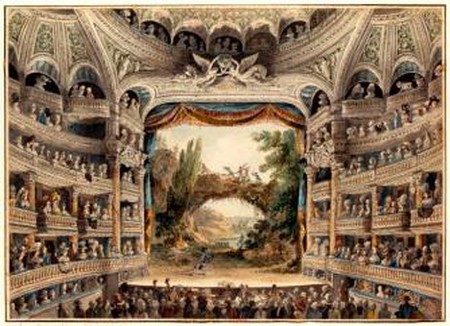 French theatre is an important part of its literary culture, and Paris has been at the centre of this theatre world since its inception. The works of Molière, Racine, Stendhal, Balzac and Zola are an indelible part of France’s canonical literature and all of them first found expression in the theatres of Paris. The most famous of these theaters is the Comédie-Française, also known as the Théâtre-Français, which has existed in various incarnations and locations since 1680. It currently sits in the grand environs of the Palais-Royal at 2 rue de Richelieu. The theatre was founded by Louis XIV as a means of merging the main acting troupes then operating in France, and is often known as La maison de Molière, the house of Molière, due to his importance for actors and for French theatre in general. The legendary theatre is a grand setting in which the rich history of Parisian literature and society become evident. 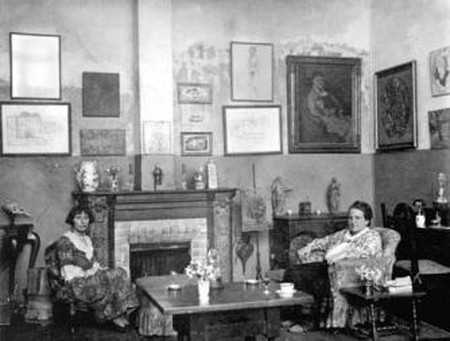 Gertrude Stein came to Paris before many of the more famous American literary expats, first visiting the city in 1903, and her cultural impact was far broader since she was a significant influence on the early development of such iconic artists as Picasso and Matisse. Along with her brother Leo Stein, and later her partner Alice B. Toklas, she was an early exponent of these artists who at that time were largely ignored by the artistic mainstream. She created a salon in her house at 27 rue De Fleurus which was frequented by these icons and later became a site of pilgrimage for the next generation of American expats, including Hemingway and Fitzgerald. The extraordinary life of Gertrude Stein is recorded in her book, The Autobiography of Alice B. Toklas, and 27 rue De Fleurus remains a site of pilgrimage for those interested in the cultural life of the early 20th century. Some of Stein’s acquisitions now hang in the nearby Musee D’Orsay and Pompidou Centre, where they receive the reverence they deserve. 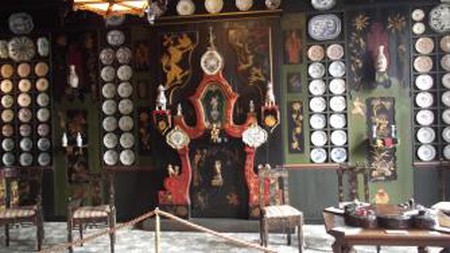 Author of such works as Les Misérables – which, as the recent film adaptation proves, still draws the crowds – Victor Hugo remains one of the most read writers of the 19th century. The house in which he lived from 1832 to 1848 at 6 Place des Vosges has been transformed into a museum in his honor and it offers a tantalizing insight into the personal life of Hugo, as well as revealing his work habits. The museum has also preserved Hugo’s Salon Chinois, a room dedicated to Chinese art and artefacts, which he created when Asian art had started to become hugely fashionable in France. The various periods of Hugo’s life are also documented in the house, which he lived in both before and after his exile in Guernsey, where he fled to escape political persecution. 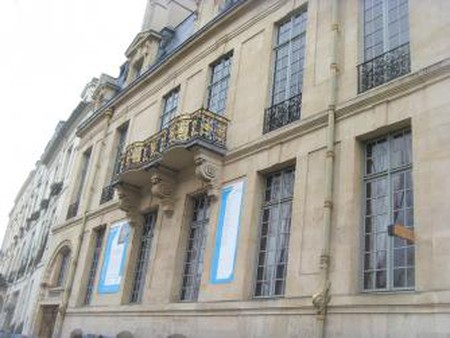 Baudelaire was Paris’ most passionate literary exponent, and his exploration of the flâneur figure remains one of the most potent evocations of urban experience. His tumultuous life saw him traverse the more debauched elements of the Parisian night and his masterpiece Fleurs du Mal is both a depiction of his dissolute lifestyle and an exploration of the fringes of social conventions and morals. Baudelaire wrote most of this work at the Hôtel de Lauzun on the on the quai d’Anjou, Île Saint-Louis. This hotel, which was built in the era of Louis XIV, has retained its aristocratic charm throughout the centuries. Baudelaire rented the upstairs apartments in 1843 and used them to write, as well as founding the Club des Hashischins (Club of the Hashish-Eaters) in the apartments, a group of writers dedicated to exploring drug use, whose other members included Victor Hugo, Alexandre Dumas and Honoré de Balzac. 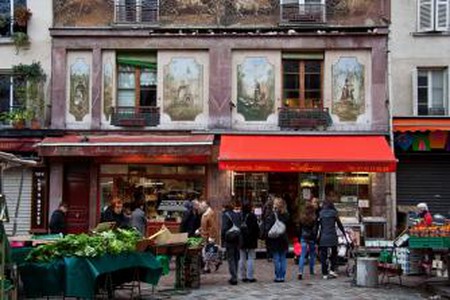 Musée du Montparnasse and Mouffetard Quarter of the Left Bank

The area of Paris most associated with literature and the art is the Left Bank, and Montparnasse in particular, and whilst the area is no longer the thriving cultural hub it once was, it still retains echoes of its heyday. This is especially evident in the Mouffetard Quarter, in which the streets surrounding the thriving market street rue Mouffetard are redolent of the time when legendary writers and artists would cross paths in the cafes and bars of the district. The Musée du Montparnasse documents the history of the area and gives an insight into what made it such an artistic inspiration for so many iconic works to the extent that, as one of its most famous residents Ernest Hemingway wrote, ‘If you are lucky enough to have lived in Paris as a young man, then wherever you go for the rest of your life, it stays with you, for Paris is a moveable feast.’