How to Experience Paris' French Revolution in 48 Hours 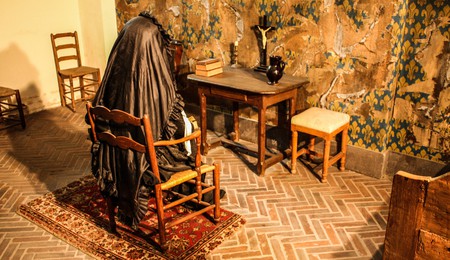 The French Revolution gripped Paris for more than a decade and yet few traces of it are visible on the city’s streets today. Our guide, which focuses on four key dates, shows you exactly where to look to experience one of European history’s longest and bloodiest periods of civil unrest in just two days.

Day 1 – Two raids and an execution

We begin at the Palais Royal and two days before the storming of the Bastille. Its arcades were a popular hangout for radicals and on July 12, riled by the sacking of Chief Minister Jacques Necker the day before, Camille Desmoulins gave a rabble-rousing speech from a tabletop outside the Café Foy at 57-60 Galerie Montpensier that set the next few days’ events in motion. There’s no plaque to mark its spot – nor outside 177 Galerie Valois where a certain assassin bought the knife that changed the course of the Revolution – but the courtyard remains almost exactly as it was in 1789. 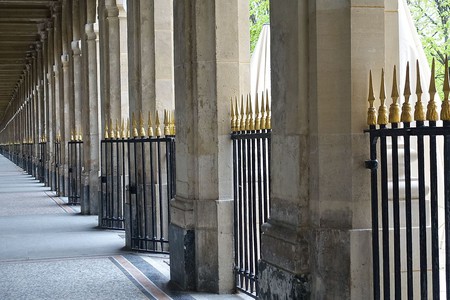 Heading south out of the Palais Royal, pass through the Louvre and into the Jardin des Tuileries. Here, on July 13, disgruntled citizens seized a royal store of weapons and rained stones down on the palace guards – the first of many brutal skirmishes the garden would witness. Following the river west on either side will bring you to Les Invalides in half an hour. 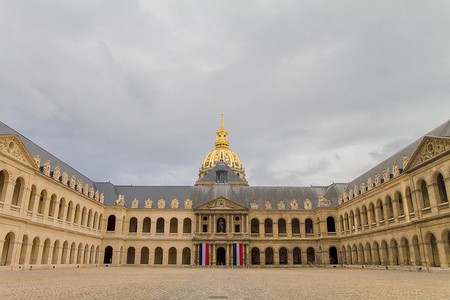 On the morning of July 14, with the city in a state of panic, several thousand men plundered the military complex’s store of 30,000 muskets. However, days before, 250 barrels of gunpowder had been moved to the Bastille for safekeeping. After a tour of the relevant exhibits of the Musée de l’Armée, it is here that our guide heads. You can either follow in the mob’s footsteps for an hour, or hop on the 87 bus at Saint-François-Xavier and arrive at the Place de la Bastille in half the time.

Surprisingly, it’s not the 170-foot (51-meter), gold statue-topped July Column that is of interest to us here (it commemorates the Revolution of 1830) but the brown brick outlines on the Boulevard Henri IV and Rue Saint-Antoine that show the perimeter of the fortress prison. After a brief negotiation and a four-hour battle, its governor, Bernard-René de Launay, surrendered to the crowd at 5:30PM. 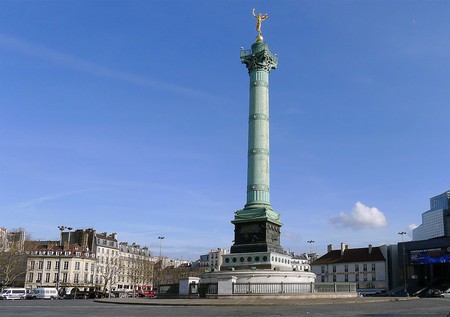 His bad day then took a turn for the worse. He was dragged to the Hôtel de Ville, under a hail of abuse, where he was beaten to within an inch of his life. (You can get here far more comfortably on the M1 in just six minutes.) Finally, having screamed ‘Enough! Let me die!’ and landed a kick squarely in the crotch of one of his attackers, de Launay was stabbed to death and his decapitated head was paraded around the square on a pike.

With this unsavory image in mind, pop over the Pont d’Arcole to the Île de la Cité and the Square Jean XXIII for a spot of lunch. The garden offers great views of Notre-Dame, which was transformed into the Temple of Reason and later a wine storehouse during the Revolution.

After lunch, we fast-forward three years to Marie Antoinette’s execution. Her last day started at the Conciergerie, a palace-turned-prison that became known as a ‘vast antechamber of death.’ The grim misery of the Revolution seeps out from the walls of this museum, which contains fascinating rooms and objects, like the queen’s eleven-by-six-foot (3.3 by 1.8 meters) cell, and the bell that announced the arrival of her tumbrel in the May Courtyard.

You can retrace her final journey by exiting the Conciergerie, crossing the Pont Neuf and, after a few blocks, turning left onto the Rue Saint-Honoré. Block out the luxury boutiques and imagine how she must have felt that day – the back of her head shaved, hands tied behind her back, and the people she once ruled cursing her from the roadside. As she passed by his balcony, the Revolutionary artist Jacques-Louis David sketched the queen staring off into space. What must have she been thinking?

A left turn will take you onto the Rue Royale and the Place de la Concorde, the square which didn’t claim the most heads but definitely the most famous ones, including those of Louis XVI, Madame du Barry, Robespierre, and poor Camille Desmoulins, who helped get the whole show going. The fountains and the obelisk, 19th-century additions, substantially alter the feel of the square, but the Pont de la Concorde that leads off it was, remarkably, built with stones from the Bastille, so that ‘the people could forever trample the ruins of the old fortress.’ 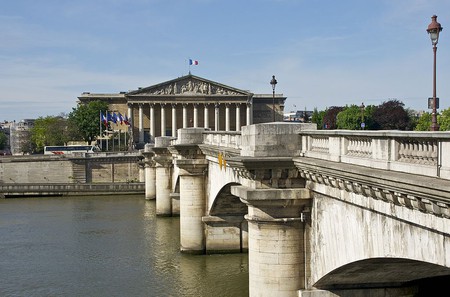 For dinner, head back on foot or on the M1 to the Rue Saint Honoré and Au Chien Qui Fume. Opened in 1740, this seafood restaurant retains many original features and is the perfect place to absorb a sense of Paris during the Revolution. 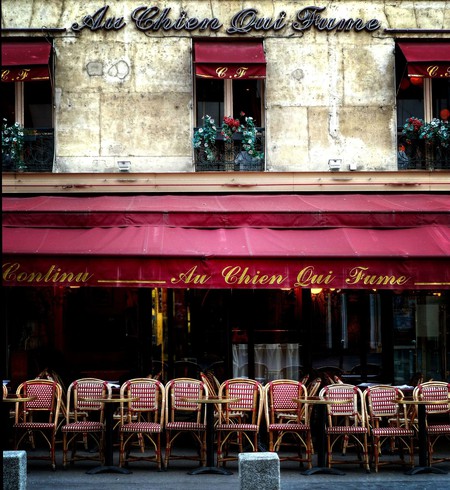 Our second day starts as many a Parisian day at the end of the 18th century would have done – with a dramatic assassination. The Musée Grévin, Paris’ museum of celebrity wax works, might seem like an odd place to go looking for the French Revolution but, in fact, hardly anywhere allows you to get closer to genuine artefacts from this time – namely the shoe-shaped, copper-lined bathtub in which pamphleteer Jean-Paul Marat was murdered and the knife Charlotte Corday used to do it.

One of the most radical voices of the day, Marat had to retire from public life due to a terrible skin disease and spent most of his days writing in a medicinal bath. On the day of his death, he permitted Corday to enter because he believed she had sensitive information for him. At the end of their 15-minute meeting, Corday drew a five-inch (12-centimeter) knife from her corset that she’d bought that day at the Palais Royal and plunged it into Marat’s carotid artery, killing him in seconds. Four days later, Corday was guillotined on the Place de la Concorde. 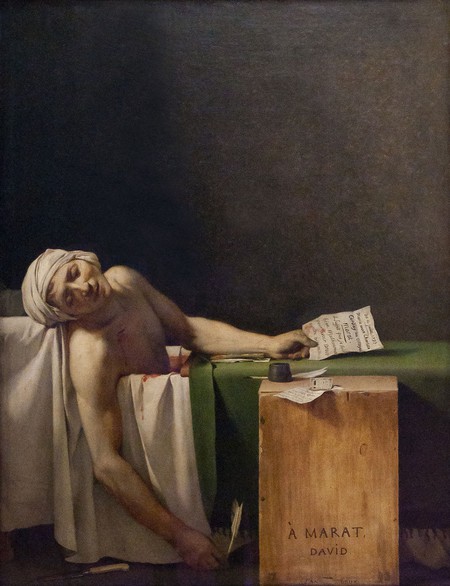 After passing through various private owners, the tub came into the possession of the Musée Grévin in the 1880s, where it is displayed with a wax work of Marat inspired by David’s famous (and romanticized) painting.

From the recreation of the crime, we head to its real location, 18 Rue de l’École de Médecine, either by walking 35 minutes, taking the M9 and M4 in 29 minutes, or on the 85 bus in under 25 minutes. Marat’s apartment was just three doors down from the Couvent des Cordeliers where he and his fellow revolutionaries had a base. His rapidly decaying body was displayed here in the days after his death and he was buried (for the first time) under a weeping willow in the garden with the entire National Convention in attendance and the Marquis de Sade delivering the eulogy.

On November 25, his remains were transferred the 12 minutes along the Boulevard Saint-Michel and Rue Cujas to the Panthéon, which had been finished in 1790 as the Abbey of Sainte-Genevieve and shortly thereafter converted into a mausoleum for great citizens of the Republic. 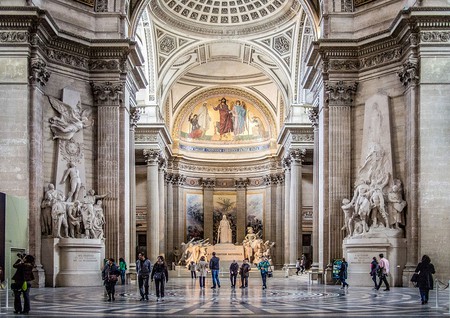 Only a few months later, Marat’s reputation was tarnished and his coffin was removed from the Panthéon and laid to rest (for the third and final time) in the cemetery of the church of Saint-Étienne-du-Mont next door.

To mull over this unusual fate and enjoy a picnic lunch, walk the six minutes downhill to the Jardin du Luxembourg, the palace of which, now the Senate, was a makeshift prison during the Revolution.

The last period to discover is the final weeks of the Reign of Terror. To do this, take the half-hour journey from Luxembourg to Nation on the RER B and RER A, and walk the short distance to the Cimitière de Picpus. This small, private cemetery contains two mass graves in which the bodies of 1306 people are interred. They were the last victims of Paris’ bloodiest chapter, which ended when Robespierre, its architect, was himself beheaded on the Place de la Concorde on July 28. 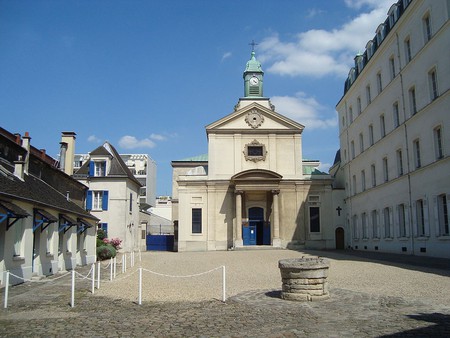 The graveyard is also the final resting place of Général Lafayette, who is known as the ‘hero of two worlds,’ referring to his involvement in the revolutionary wars of both America and France.

To finish this 48-hours immersion, jump on the 86 bus at Nation for the 15-minute ride to Odéon, where you’ll find the Café Procope at 13 Rue de l’Ancienne Comédie. Opened in 1686, it was here that Voltaire, Rousseau, Danton, and Marat did their drinking and debating, and among its incredible artefacts is a postcard signed by Marie Antoinette. 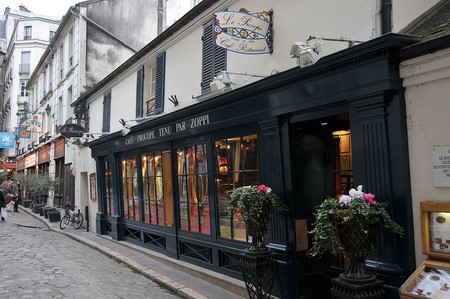 If you have more time in Paris, consider checking out the Louvre’s collection of 18th-century paintings, sculptures, and furniture. The museum officially opened on August 10, 1793, to mark the first anniversary of the royal couple’s arrest on August 13, 1792, and the abolition of the monarchy a month later.

The Musée Carnavalet, which is dedicated to the history of Paris, features incredible Revolution-era paintings, documents, and relics, including Louis XVI and Marie Antoinette’s few possessions during their imprisonment. The museum is closed for major renovation works until the end of 2019 but extra-mural exhibitions, which are advertised through its Facebook page, are regularly held.