15 Reasons Why We Love Paris, France 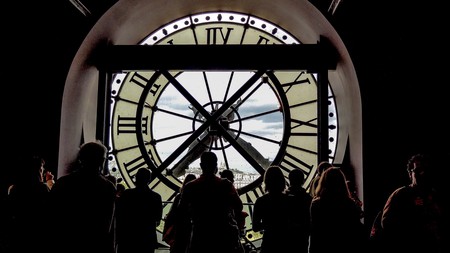 Paris’s modernité lies in the art of capturing a fleeting experience of life within its bustling urban metropolis. It is for reasons like these that Paris is such a beloved city. Read on and discover the other 15 things we adore about The City of Light.

Breath-taking panoramic views of Paris are always exciting to discover. Luckily, Paris is chock full of views from above, offering undisputed thrills. Enjoy a sweeping view over the City of Lights with a taste of the view at the Jules Verne Restaurant situated in the Eiff; Paris’ beacon of tourism. Pricey luxury department store (grand magasin), Printemps’ rooftop also has sensational views of Paris. If you find yourself craving even more beautiful views of the city, check out our best spots for beautiful views of Paris. 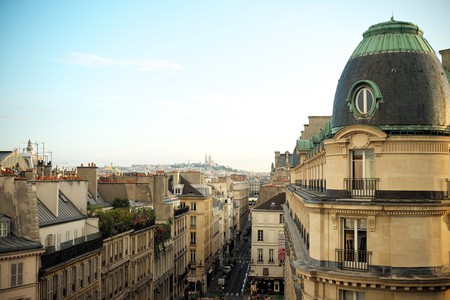 Paris has been the scene for great cinema classics for years. Whether it is the Audrey Hepburn and Fred Astaire classic, Funny Face or Vincente Minnelli’s Gigi set at Maxim’s de Paris, there’s no shortage of movies set in the city. Award winning films such as Amélie, was also framed in a Parisian backdrop with its whimsical depiction of contemporary Parisian life set in Montmartre. Woody Allen’s Midnight in Paris captured the Golden Age of Paris in the roaring 1920s. The Paris Film Office has said; ‘Filming in Paris offers a huge variety of prestigious or evocative locations with a profusion of talented and highly experienced cinema professionals.’ We agree! Our list of the best movies set in Paris sheds light on a few movies shot on location in Paris. 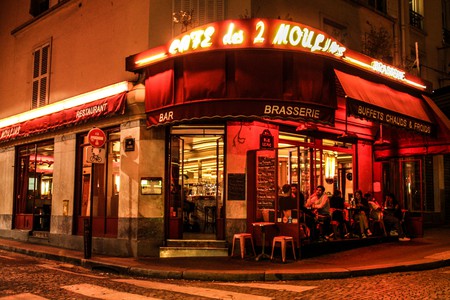 Visit the cafe Amelie was filmed in | © Amélie/Flickr

French are renowned for their approach to nudity in advertising. There are more naked people on billboards in France than in any other country. French brands such as Guerlain, Etam, Miss Dior‘s Chérie, Chanel, and department store Galeries Lafayette are famous for their somewhat ‘scandalous’ adverts. While some may be offended by this, others believe that it normalizes nudity. Whatever your opinion is, you can be sure to see plenty of racy advertisements all over Paris. 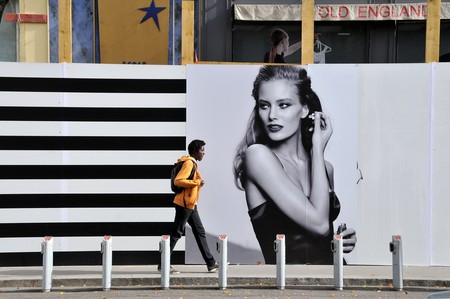 A stroll in Paris and a cobblestone street go together like a horse and carriage, you can’t have one without the other. Cobblestones aglow in the setting sun are by far one of the most beautiful sights, especially in Paris. Stroll along the medieval cobblestone streets of the Left Bank where you can find the oldest tree in Paris planted in 1601, and where Hemingway once sat, scribbled and slowly drank his signature cocktail; absinthe and champagne. Experience ‘Old Paris‘ in Montmartre where you can enjoy a quaint village-like atmosphere with its little cafés that line cobblestone streets. Author Victor Hugo once said, ‘The highest symbol for the people is the cobblestone, one walks on it.’

The first café in Paris opened in 1672 and the most famous of all of them is the Café Procope which opened in 1686. Café Procope still exists today, during its earliest years it was a meeting place of the French Enlightenment; Voltaire, Rousseau and Denis Diderot would gather at this place. Not a coffee drinker? Try the famous hot chocolate at Angelina on Rue de Rivoli. A kaleidoscope of colors tickle your fancy? Head on over to La Durée on the Champs-Elysées for a multitude of macarons. In the mood for intellectual atmosphere? Meander over to Café Flore in Saint-Germain-des-Prés where Sartre and de Beauvoir passionately engaged in intellectual chatter. You’ll soon become an expert of Parisian café culture. 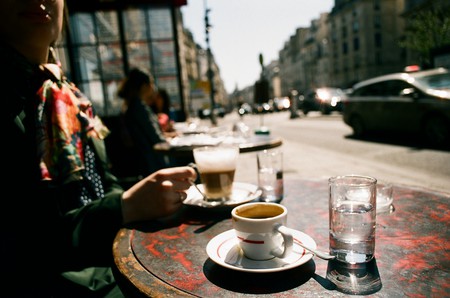 We can’t talk about Paris without mentioning the amazing fashion. The term ‘trendy’ has become so ubiquitous in contemporary culture that here in Paris, fashion trends transition frequently given the numerous and ultra glamorous fashion shows that are held each year. Saunter your way over to Colette on Rue Saint-Honoré which offers a never ending assortment of fashion, high-tech, arts, street wear, beauty and waters. Well-loved French names such as Isabelle Marant and Repetto offer quirky emerging fashion with unique clothing lines. Opting for a Parisian ‘bobo’ (bohemian bourgeois) look? Le Marais it is then! Boutiques stock Parisian classics to complete that effortless look. Stores in the 11th arrondissement offer the latest trends in boutiques like La Fée Maraboutée, So We Are, Sessùn, Les Fleurs.

To escape the feel of an ‘asphalt jungle’, urban eye-openers were created by France’s leading botanical scientist Patrick Blanc. Blanc is the modern innovator behind the green walls considered to be Paris’ precious emerald jewels. Buildings in Paris have their facades transformed into luscious green gardens, also known as living walls or vertical gardens. Featuring an integrated water delivery system, completely covered with greenery and a growing medium, such as soil and polyamide felt, the plants are then chosen for their ability to grow in this type of environment and depend on available light. A few of these beautifully landscaped man-made gardens can be admired at the Musée du Quai Branly, the Pershing Hall hotel, BHV Home, L’Oasis d’Aboukir and Rue D’Alsace. Discover more through our article: Patrick Blanc: The Hanging Gardens Of Paris.

The Biggest Flea Market in the World

After Emperor Napoleon III and architect Baron Haussmann’s complete overhaul of the city in the 19th century, Paris suddenly was a city full of beautiful façades and wide boulevards. Alleys and slums were demolished, which disgruntled most of their residents who took refuge in the north of Paris. These merchants continued to sell their goods in stalls erected near Porte de Clignancourt, and then became the ‘marché aux puces’, meaning flea market. The flea market still exists today. This caverne d’Ali Baba (Ali Baba’s cave) has the highest concentration of antique dealers and second-hand furniture dealers in the world, the flea market is held every Saturday, Sunday, and Monday for an ideal flânerie Parisienne (Parisian stroll). 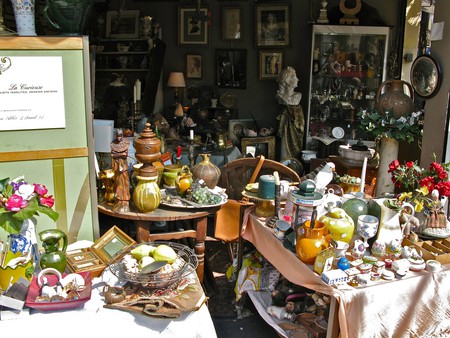 Luxury is a word that many would associate with Paris. Scattered across Paris hides a handful of 5-star luxury hotels, fit only for the most elegant among us. In the heart of Faubourg Saint-Honoré, a paradise for fashionistas, is hotel Le Bristol. A few steps from one of the world’s most beautiful avenues, the Champs-Elysées, lies Le Four Seasons Hotel George V. Possessing architectural blends of the traditional Louis XVI style is none other than Le Meurice. A jewel, Le Park Hyatt Paris Vendome, sparkles on Paris’ jewel avenue, Rue de La Paix. On Avenue Montaigne close to the biggest fashion houses is where Le Plaza Athénée is resides. Satisfying the most refined of palates Le Royal Monceau serves delicious food at its restaurant. Near the Louvre and closely linked with the elegance of haute couture is Le Mandarin Oriental. Le Shangri-La, former home of Prince Roland Bonaparte is listed as an historical monument since 2009.

A famous icon of France and the world, the Eiffel Tower is adorned with golden lights that sparkle for 5 minutes every hour on the hour, every evening. Its beacon shines over Paris with a reach of 80 kilometers. The golden lighting dates from 1985 and this illumination signals the starting point of a nocturnal revival of monuments in Paris as well as in the cities of France and the world. 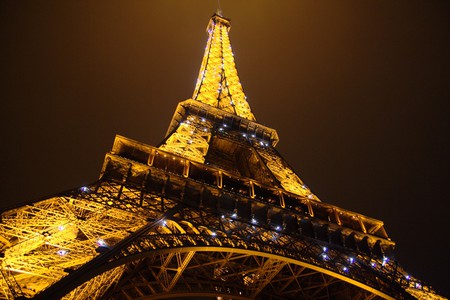 Paris possesses a rich and attractive cultural scene with shows and activities, festivals, expositions, new gallery openings, performing arts, art shops and 250 museums happening all year round. Paris reinvents itself and moves forward with much of the energy of the city’s artistic life existing beyond the center. Some of the most exciting work is taking place in popular music, fashion design and literature. Notable cultural attractions are these emblematic museums; Le Louvre, Le Musée Picasso, Le Musée Rodin and Le Musée d’Orsay which hold regular exhibitions and events.

Picnics Along the Seine

Grab your picnic basket filled with French delights such as saucisson, baguette, wine, cheese, fresh fruit and veggies and picorez à la Parisienne (nibble like a Parisian) on the banks of the Seine whilst enjoying the spectacular views. Great picnic spots can be found on the Quai de la Tournelle with a view of Notre Dame. Enjoy 2.3 km of renovated quaysides between the Pont Royal and the Pont d’Alma; a haven of sunny terraces, floating gardens, games for children, an athletics track and a gigantic set of steps leading down to the Seine. Along the Seine there are no shortage of locations with unrestricted views of the capital’s bridges and the pleasure boats on the Quai St. Bernard. Le Square du Vert-Galant on an island in Paris, l’île de la Cité, is situated near the extremely romantic Pont Neuf. The Pont des Arts, it’s backdrop highly appreciated by painters, is also an unmissable spot. The Ourcq canal, where petanque lovers like to meet, and the Saint-Martin canal, where the atmosphere is young and relaxed and less touristy than on the banks of the Seine, can also be appreciated with a picnic. 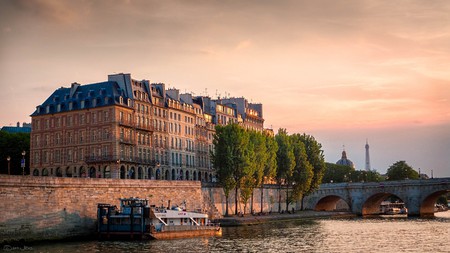 Walks in the Woods and in Historical Gardens

Paris is surrounded by greenery, with the most famous park being the Bois de Boulogne. Comprising more than 809 hectares (2,000 acres), the wood boasts walking trails, lakes for boating, two courses for horseracing, a children’s amusement park, an area for puppet shows, a miniature golf course, cafés and restaurants, a giant doll’s house, and a small zoo. Another famous garden is the Tuileries, located in front of the Louvre museum. At the Place des Voges in the Marais is a quaint park featuring the famous author Victor Hugo’s house. On the left bank are the Luxembourg Gardens, impressive fountains and beautiful statues representing Greek and Roman gods decorate this park. Another huge parkland is the Bois de Vincennes. It is comparable to the Bois de Boulogne with a racecourse and a zoo. 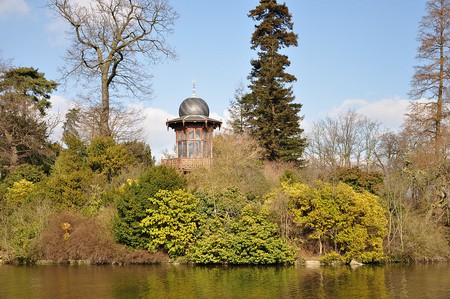 No keeping mum about libraries in Paris, where you can learn all about Paris’ history. In 1537, a copyright law was passed that required every published French work to be in the National Library. At the Bibliothèque Historique de la Ville de Paris, discover the collections of manuscripts and other works of art by French writers and philosophers, pertaining to Paris. Founded in the Middle Ages, The Bibliothèque Nationale (National Library) has many annexes and houses collections by French writers (native to Paris), old manuscripts, engravings and photographs, maps, music, and printed books. To discover more, make sure to check out our article on the 10 most beautiful libraries in Paris.

Tragedy struck in the form of a terror attack on the people of France in November 2015. Love and solidarity were Paris’ response to this act of hatred. The city’s constant idea of freedom shows this multicultural society will never be torn apart. Paris’ resilient motto “Fluctuat nec mergitur”, meaning ‘tossed but not sunk’ in Latin, has been around since before the year 310. While Paris has had a history of ups and downs, the city continues to hold her head high. 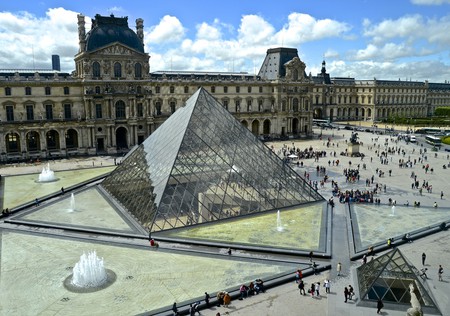 © David McSpadden/Flickr
Give us feedback