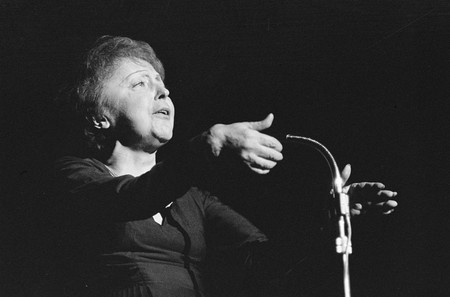 Marlene Dietrich once described Édith Piaf’s voice as the soul of Paris. Her songs about life on the capital’s streets, imbued with sadness and resilience, resonate with their audiences today as they did on her death in 1963. For some, they are and always will be the soundtrack of the city. But, we ask, do they still reflect its spirit? And would the Little Sparrow of Belleville even recognize her hometown today?

The story goes that Édith Giovanna Gassion came into the world on the doorstep of 72 rue de Belleville on December 19, 1915. (Her birth certificate states she was born at the Hôpital Tenon, but let’s not argue with legend.) As a child, she performed with her father on the streets of Belleville to earn money for food and rent. The neighborhood, straddling the 19th and 20th arrondissements, has historically been working class and a point of entry for immigrants. In recent years, Paris’ northeasterly wave of gentrification has washed over the area, transforming it, at least in part, into another hipster paradise. Some relics of the 1920s remain like Aux Folies, where Piaf first performed indoors. 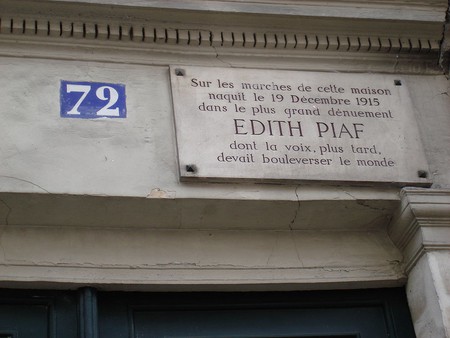 At 15, Piaf was busking with a friend around Pigalle, Ménilmontant, and the suburbs, earning enough between them for a room at the Grand Hôtel de Clermont in Montmartre. They were joined by Piaf’s boyfriend, Louis Dupont (reputedly a pimp), and in February 1933, their daughter Marcelle was born. At 17, Piaf was ill-equipped to care for her child, and before long, the young couple split. Dupont took custody of Marcelle, but she died of meningitis at two. At the time, this desperate tale was indicative of life in Montmartre, known then as Paris’ seediest hill. Today, the Boulevard de Clichy retains a few of its sex shops, but by and large, the neighborhood has been thoroughly sanitized.

In October 1935, Piaf was approached by Louis Leplée while singing on the corner of rue Troyon and avenue Mac-Mahon in the upmarket 17th arrondissement. He owned Le Gerny’s nightclub off the nearby Champs-Élysées, and upon recognizing her talent, he took her under his wing. For her diminutive stature (she was only four feet, eight inches tall) and nervous disposition, he gave her the nickname La Môme Piaf, The Little Sparrow, and established her trademark look of a simple black dress. The area where Piaf got her big break remains Paris’ glitziest corner.

Less than a year later, Leplée was murdered. Piaf then hired Raymond Asso, a former lover, to manage her, and together they rebranded her Édith Piaf and decided she should begin singing songs about her life experiences. Their strategy worked, and she began working in clubs across the city. Piaf’s career didn’t falter one bit during the Nazi occupation of Paris. She played the bars, concert halls, and brothels frequented by German soldiers to such an extent that she was accused of being a collaboratrice. Au Agile Lapin in Montmartre, one of her few haunts from the 1930s and 40s, is standing today.

After the war, she successfully toured Europe, the United States, and South America as the new voice of France, and in 1946, she released ‘La Vie en rose,’ arguably her most famous song. However, tragedy struck again in 1949 when the love of her life, Marcel Cerdan, died in a plane crash. This led her to alcoholism and the abuse of pain medication prescribed first for arthritis and subsequently for injuries sustained during her three near-fatal car crashes.

Nevertheless, some of Piaf’s finest musical accomplishments came during the 1950s. Her five concerts at the Paris Olympia produced recordings that have never been out of circulation. The song ‘Non, je ne regrette rien,’ which she debuted at the concert hall in 1961 in a bid to save it from bankruptcy, became an instant classic. The Olympia has survived the decades and is still one of Paris’ most popular venues.

On October 10, 1963, Piaf died at her villa in Grasse on the French Riviera, aged 47. Her weight had dropped to 30 kilograms. More than 100,000 people trailed her coffin through the streets of Paris on its way to Père Lachaise, the famous cemetery just a mile from where she was born. 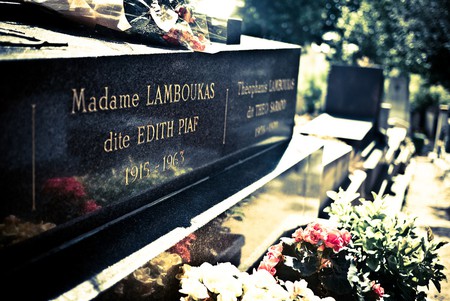 Since her death, Piaf has been the subject of songs, television shows, musicals, and films, most notably Olivier Dahan’s La Vie en Rose for which Marion Cotillard won her Oscar, and the current sellout show I Love Piaf.

While Piaf’s lyrics have stood the test of time, as have some of the Parisian institutions that made her famous, what are in danger of being lost are the working class neighborhoods that informed them. If Paris is allowed to become a reserve of the wealthy, this might just be something we live to regret.