A Glimpse of the Legacy of Paris' Romantic Tourist Attraction 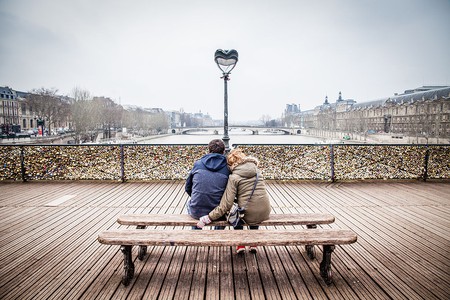 For nearly a decade, millions of padlocks of love on Paris’ bridges, railings, and street lamps were the city’s most controversial attraction, pitting amorous tourists against locals, heritage experts, and even art critics. In the end, their removal and sale to raise funds for migrant and refugee charities has given (almost) everyone the chance to remember this fad in a positive light.

At some point in 2008, padlocks, most with lovers’ initials engraved or scratched on their surface, began to appear on Paris’ bridges, first the Pont des Arts, which crosses the Seine just downstream from the Île de la Cité, and then the Pont de l’Archevêché, which joins the Left Bank to the island at the back of Notre-Dame, and others along the river. 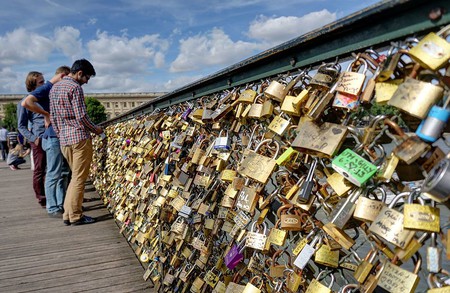 Soon hundreds of thousands of visiting couples were squeezing their padlocks onto the bridges and throwing the keys into the river as a symbol of their everlasting love. Then it went global: the Brooklyn Bridge, the Great Wall of China, and the Millennium Bridge in London were all adorned with tokens of touristic affection.

The residents at the epicenter of this new travel craze, ever the aesthetes, weren’t too pleased about the sudden transformation of Paris’ UNESCO-protected riverscape, now heavy with lumps of once luminous, rapidly rusting metal. In January 2014, two US expats, Lisa Anselmo and Lisa Taylor Huff, founded the No Love Locks campaign to fight on behalf of Parisians to have them removed.

Their calls were echoed by architectural heritage specialists who raised concerns about the bridges’ structural integrity given the extra weight of the locks. These fears were confirmed in June 2014 when a portion of the Pont des Arts collapsed.

A year later, the local authority began removing the estimated one million padlocks from the bridge—45 tons of metal was hauled away toward an uncertain fate—and installing plexiglass barriers to prevent them reappearing. The removal team then went to work on the Pont de l’Archevêché.

Writing in The Guardian at the time, the art critic Jonathan Jones praised the move, describing the tradition as “one of the shallowest, stupidest, phoniest expressions of love ever devised.” Going further, he argued: “It is a wanton and arrogant act of destruction. It is littering. It is an attack on the very beauty that people supposedly travel to Paris or Rome to see.”

Other voices were less supportive, suggesting the City of Love was becoming a little too cynical. 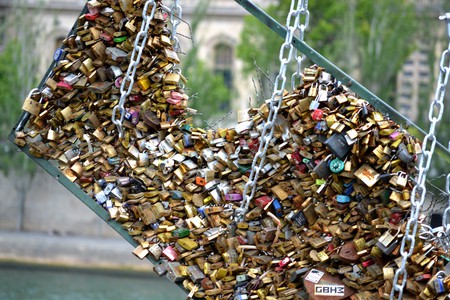 In December 2016, it was announced that some of the love locks would be auctioned and the rest melted down and sold as scrap to raise funds for charities in the capital working with migrants and refugees, large numbers of whom arrived in October that year following the closure of the Calais “Jungle” camp.

Speaking at the time, Bruno Julliard, First Deputy Mayor of Paris, hoped that over €100,000 would be raised. The No Love Locks group were among many delighted by the plans, tweeting: “Now that’s a REAL expression of love.”

The auction was conducted by the Credit Municipal de Paris, a local government-managed bank that provides loans and funding support to disadvantaged Parisians, in May 2017. A 90-page catalog listed the 165 batches up for grabs, the smallest consisting of just five locks and the largest, a complete section of the Pont des Arts, weighing in at 470kg.

Describing them, auctioneer Mathilde Belcour-Cordelier said: “When we see the result, we get the impression that each person has shared a part of their story and, ultimately, this is a collective piece of art.”

Given the state of decay of many of the padlocks, only 7% were deemed fit for sale. It’s also thought that much of the leftover metal may be too toxic to recycle. It thus remains to be seen what will be done with the remaining 93%.

In the end, $369,647 was raised, with the chunk of the Pont des Arts fetching the top price of $25,175. The money will be split between three charities: The Salvation Army, Solipam, and Emmaüs Solidarité.

“It was obvious that if we organized an auction, the proceeds from this auction could only be used in a charitable manner,” said Julliard. “[I]n an act of generosity, to symbolically pursue the message of affection and love that couples from all over the world wanted to share when they came to Paris and installed these locks.”

Whatever becomes of the remaining love locks, few disagree with the argument that selling them to benefit the least fortunate in society has done more good for Paris than they ever could have done hanging from its bridges. The only remaining voices of opposition belong to far-right activists, like those who briefly interrupted the auction, who object to the presence of migrants and refugees in the capital.

Thankfully, their divisive tactics will be forgotten in an instant; the coming together of previously discordant groups—tourists, locals, architects, politicians, and appreciators of art—to find solutions to Paris’ problems will be remembered forever.