8 Sculptures By Giacometti That You Should Know 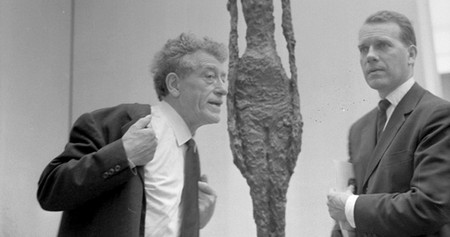 Courtesy of the Kunststiftung Poll/Wikicommons

Alberto Giacometti, the man who created a tribe of slender bronze aliens, now to be seen in museums around the world, also created at one point surrealist sculptures and labyrinth-like architectural spaces. Discover the eight pieces that will help you understand the modern master’s evolution.

Giacometti arrived in Paris at the age of 20, and was quick to absorb all the rich influences that the capital offered at the time. Although he was trained by Bourdelle in classical sculpture, the works of the Cubists and Brancusi interested him as well. It was through the discovery of African art, which was being regularly exhibited in Paris then, however, that he finally broke away from Western influences and appropriated the frontality, symbols, and metaphors of this type of art. In Spoon Woman, one of the most famous of his early sculptures, woman stands as a symbol of fertility, as seen by the Dan people of West Africa. In it we can see too influences of cubist shapes, and the beginning of an ever-lasting interest in the female and male types. 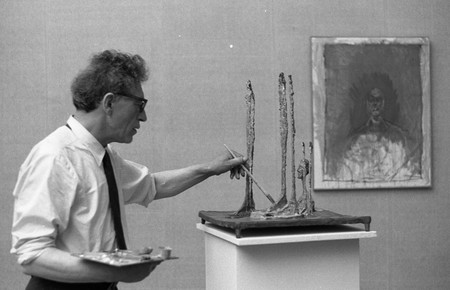 Giacometti had become frustrated, beginning in 1925, with his inability to express his particular, inner vision of anatomy. To get away from this frustration, Giacometti had begun to work from memory. In the summer of 1927, he worked on a series of heads inspired by his mother and father. Flirting with the latest trends in sculpture and experimentation, with Oceanic and African influences, he created the Gazing Head in 1928, his ‘first entirely original invention.’ A flat, rectangular plaque in tension, which is at once figurative and abstract, it was the piece that caught the sharp attention of the surrealist group. He would be part of the group until 1935, when he decided to work from models again, ready to pursue his quest of externalizing his vision.

More than ten years after Giacometti had been kicked out of the Surrealists because of his need or impulse to sculpt after real heads and models, he became a world-famous, original, and eccentric artist, represented by Pierre Matisse in New York, where this sculpture would be taken for an exhibition in 1947. Le Nez still has surrealist traits and a menacing aura, but we are now in the middle of Giacometti’s defined vocabulary – and at the moment where he starts to develop ‘the cage.’ An eerie, decapitated Pinocchio-like head hangs from an iron cage, its nose protruding the space delimited for the work, ‘the nose further extending beyond the confines of its prison.” The facial expression is one of anguish, and indeed this piece can be seen as one linked to its context – that of post-war existentialist France, where Sartre (one of Giacometti’s best friends) has written extensively on the modern man’s angst, and which had so often been extended to the artistic production of the time. 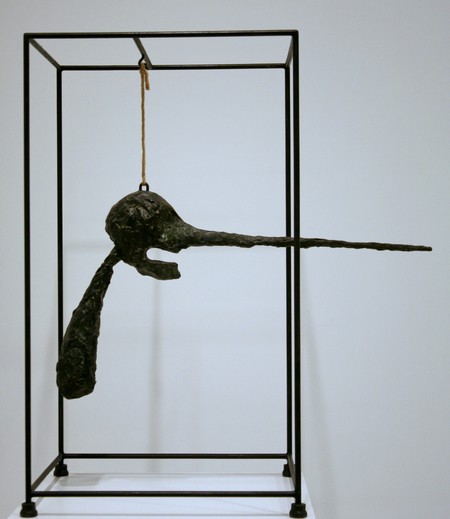 As we have seen with The Nose, during his stay in Switzerland through the war years, Giacometti had started integrating structures and sculptures. The Chariot depicts a goddess atop a chariot with very large wheels. We know by know that he was inspired by arts of other cultures and periods, and this one is reminiscent of the Egyptian Chariots which he had seen in Florence’s Archeological Museum. However, this is not simply Giacometti playing with the art of antiquity; if his slender women were not slender enough, light enough, Giacometti was searching for a way to ‘position a figure in empty space’ – a rudimentary suspension if we compare it to The Nose, but a fun and daring feat of equilibrium and movement. 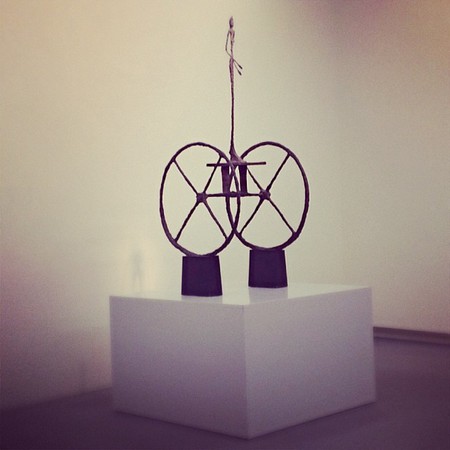 The Chariot | ©Mark B. Schlemmer/Flickr

Giacometti had been immersed in the surrealist world for two years, and he had been creating, in his words, ‘sculptures that presented themselves to my mind entirely accomplished. I limited myself to reproducing them . . . without asking myself what they could mean.’ With this piece, Giacometti is giving his formal language, the possibility of materials, a protagonism of their own. Giacometti saw a ‘sharpness’ in reality, bodies ‘were never for me a compact mass but like a transparent construction.’ It is the product of Giacometti’s affair with a woman named Denise, with whom he built a ‘fantastic palace at night” – the imaginary world of their enigmatic relationship, being given shape as an architectural skeleton.

Piazza features a group of figurines who, although petrified, seem to advance towards each other. Yet knowing Giacometti, they are unlikely to speak or acknowledge each other – something which only highlights the emptiness already spoken about. They are absorbed in their own space, once more, about to disappear. As the artist explains it: ‘In the street people astound and interest me more than any sculpture or painting. Every second the people stream together and go apart, then they approach each other to get closer to one another.’ From the 1940s onwards, Giacometti worked ceaselessly on these figures, but the figures’ inherent loneliness becomes much more direct. 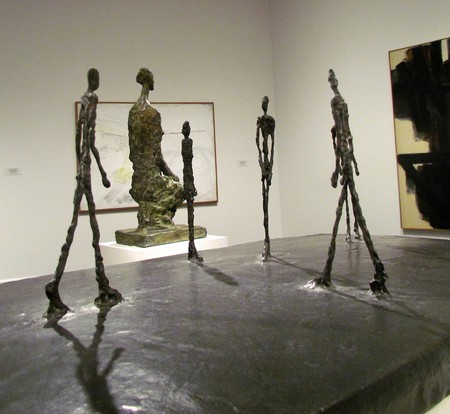 Cast in 1961, it was exhibited a year later at the Venice Biennale. It was created at the pinnacle of his career, where his experimentation with human anatomy had given way to the solidification of his style. Without a doubt the most emblematic of Giacometti’s practice, it integrates staticity and movement, heaviness of subject and lightness of matter. In his well-known melancholy, slender and alien walking men ‘appear to have been eaten away by the very atmosphere that surrounds them.’ Whether of his own accord or not, the artist’s bronze men have been taken as emblems of the crude reality of life in the second half of the century. A friend of existentialists, and a rather dark individual himself, Giacometti’s art shed light on human absurdity and fragility: ‘Emptiness filters through everywhere, each creature secretes his own void.’ 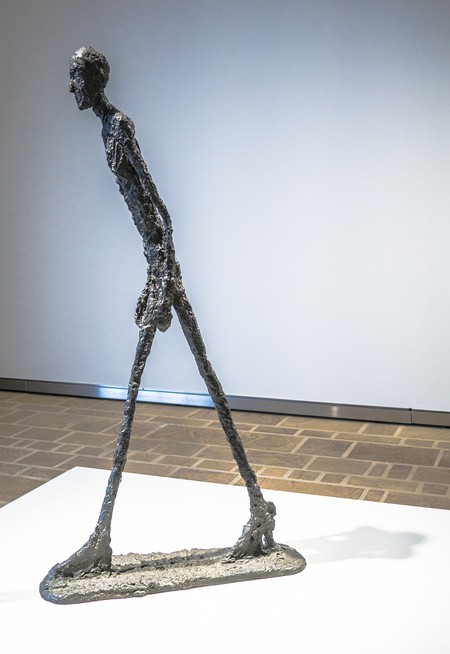 It was when Giacometti returned to Switzerland as a refugee in 1942, that he met Annette Arm, who was working for the Red Cross. She would then move to his tiny, decrepit apartment in Montparnasse in 1946, and finally the couple would get married in 1949. Until his death in 1966, Annette would become his main female model, became the rights owner of his work and built the Fondation Giacometti in Paris. Giacometti, relentlessly seeking to capture his internal vision of his wife in bronze, created a series of eight busts of her. Again, as happened with Diego, Giacometti explains how ‘after three days of working she doesn’t resemble herself any more.’ 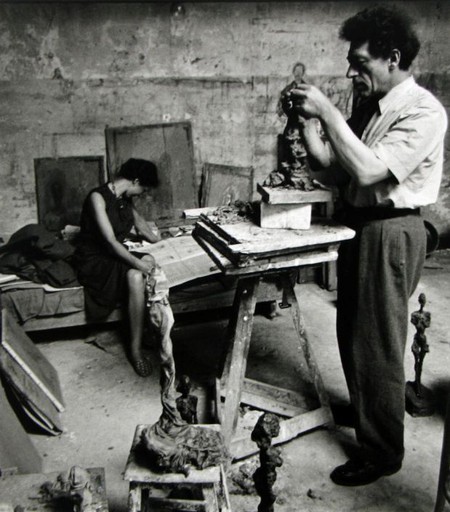