10 Of The Most Beautiful Art Nouveau Metro Stations in Paris 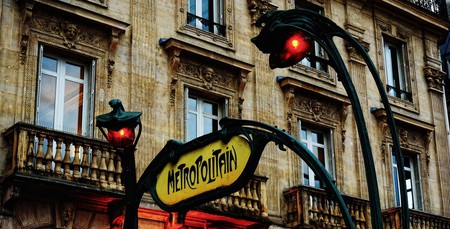 When the Paris metro system opened 116 years ago, Art Nouveau was at its peak. By this point, Parisians had wearied of identical Haussmannian boulevards and were ready for something new. In 1898, Hector Guimard’s Castel Béranger, an upmarket apartment block in the 16th arrondissement, provided just that. The success of this project made this Lyonnais architect the top pick for designing the gateways to the capital’s new subterranean world. 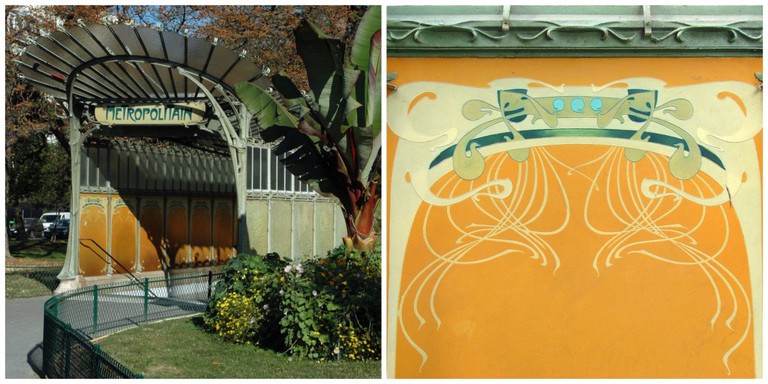 Port Dauphine metro station | © Maureen ; Porte dauphine metro station detail │© Jean-Pierre Dalbéra
Guimard created his metro entrances according to two principal styles: those with roofs and those without. The former, known as édicules,or kiosks, also featured a fan-shaped glass awning to the fore and, in some cases, opaque paneling with floral motifs. The only remaining example of this style, what Guimard called his ‘dragonfly design,’ can be found at Porte Dauphine, which is unchanged since it opened in 1900. In fact, only two original kiosks remain in the city and the most elaborate, those at Étoile and Bastille, were unfortunately dismantled in the 1960s.
Open In Google Maps
Paris, Île-de-France, 75016, France
Visit Website
Give us feedback 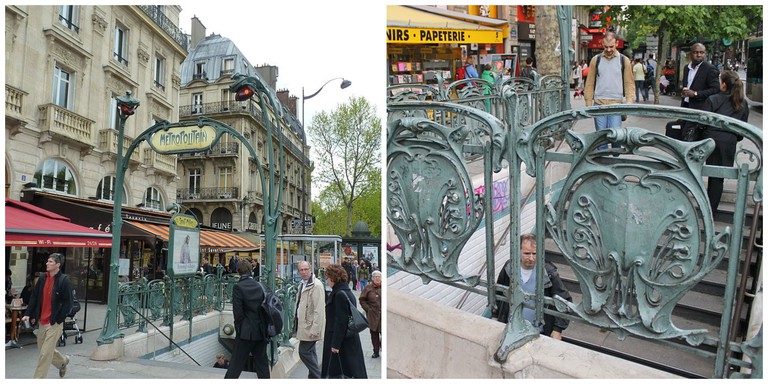 Saint-Michel metro entrance │ | © ctj71081 ; Saint-Michel metro entrance detail │| Connie Ma
Saint-Michel in the Latin Quarter was opened towards the end of the style’s prominence in 1910. The most remarkable thing about these entrances is that they should never really have seen the light of day. In 1899, the Paris Metropolitan Railway Company launched a competition to determine the designer of the metro’s street architecture, and this was won by Henry Duray. However, the CMP’s president wasn’t so keen on Duray’s proposal, preferring that of Jean-Camille Formigé, the municipal architect. As a compromise, Guimard was offered the job, given how enthusiastically the public had reacted to the Castel Béranger.
Open In Google Maps
Quai Saint-Michel, Paris, Île-de-France, 75005, France
Visit Website
Give us feedback 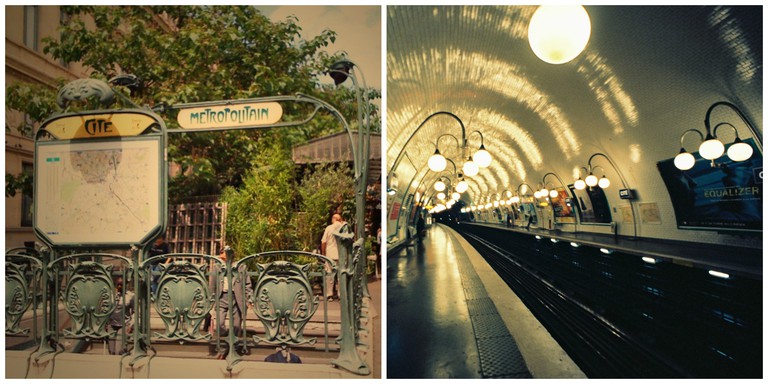 Cité metro station │ | © Yuko Honda ; Cité metro station platform │| Blowing Puffer Fish
The Île de la Cité is served by only one metro station, the Art Nouveau wonder Cité. The entrance can be found on the edge of the flower and rare bird market that is held on the island every weekend. It is also worth going down onto the platform of the station to get a feel of what Paris might have been like at the turn of the last century. It’s high-arched ceiling and globe light fixtures giving the place a unique feel when compared to the rest of the system.
Open In Google Maps
Paris, Île-de-France, 75004, France
Visit Website
Give us feedback 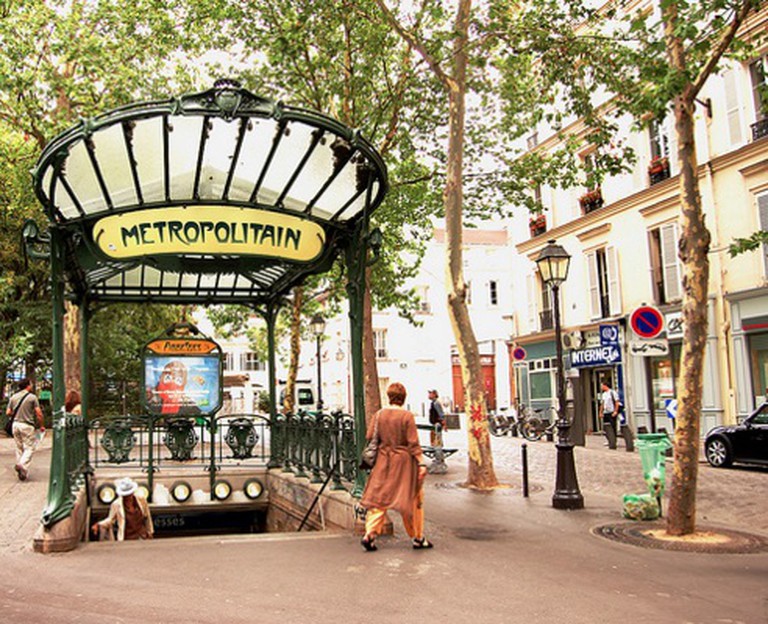 Abbsesses | ©Andrea, Flickr
The second surviving édicule can be found at Abbesses in Montmartre. While the station opened in 1912, the entrance was only moved here in 1974 from its original site by the Hôtel de Ville. Another interesting feature of this station is its long spiral staircase, the walls of which are painted with scenes from the surrounding neighborhood. Once covered in graffiti, the murals make for a pleasant descent, but only attempt to see them on the way up if you are in shape – the platform is one of the deepest in the city!
Open In Google Maps
Paris, Île-de-France, 75018, France
Give us feedback 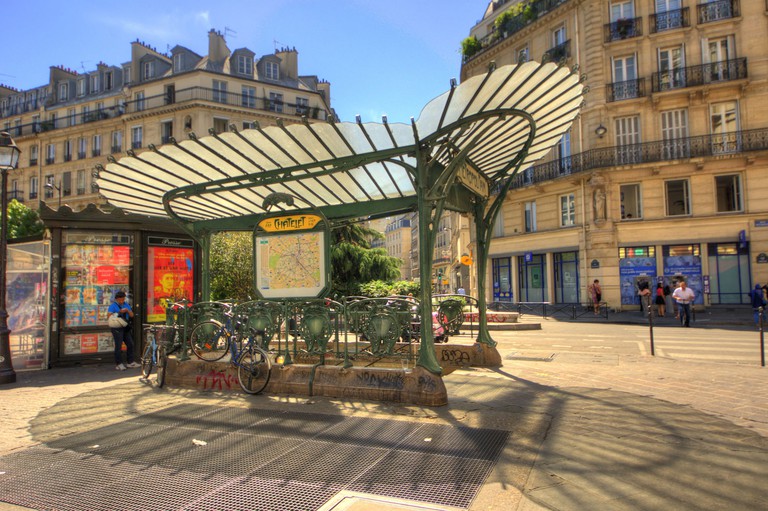 Chatelet metro entrance │ | © Claude Attard
There is actually another kiosk in Paris but it is a modern replica. In 2000, one of the entrances to Châtelet, which is part of the largest underground station in the world, was replaced with a Guimard-style entrance to celebrate the system’s centenary. A fraction of the 750,000 travelers who pass through the station every day do so through this entrance, and an even smaller proportion realize that it isn’t an original.
Open In Google Maps
Paris, Île-de-France, 75001, France
+33890177598
Visit Website
Give us feedback 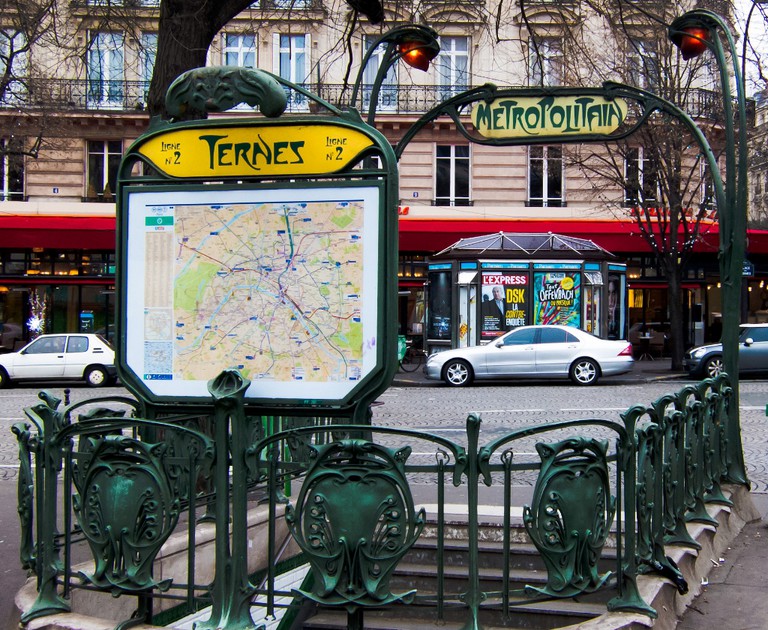 Ternes metro station │ | © Mark Fischer
Ternes was among the second wave of Paris metro stations to open in 1902. From their earliest days, while many loved Guimard’s designs, there were also those who had nothing but criticism for them. According to these detractors, the lettering on the signs was illegible and the flower-shaped lights gave the appearance of a monster glaring into the night. Love for the designs experienced an overall dip in appreciation during the middle of the 20th century, but since 1999 renovations of the city’s 303 stations have reflected their original design principles.
Open In Google Maps
Place des Ternes, Paris, Île-de-France, 75008, France
Visit Website
Give us feedback 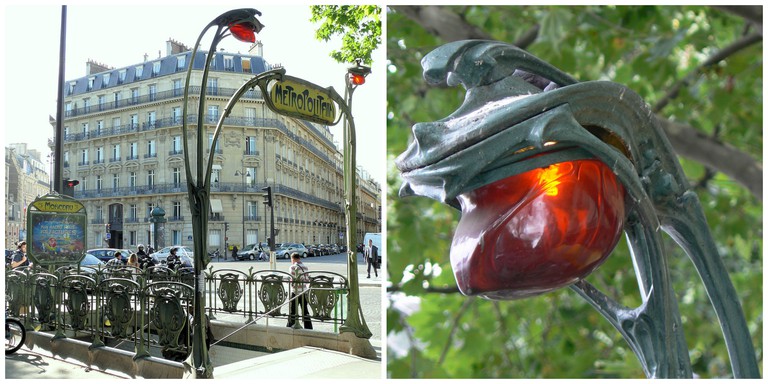 Monceau metro entrance │ | © MOSSOT ; Art nouveau metro station light │| youflavio
Monceau shares its name with the park that it is located right beside it, which just so happens to be one of the most beautiful in Paris. Parc Monceau was conceived and built by the eccentric Duke of Chartres as a place where he could display his wild tastes and enthusiasm for the globe’s architectural heritage. Amongst the trees, grassy knolls, and play areas, you will find Roman colonnades, an Egyptian pyramid, and a Chinese fort.
Open In Google Maps
Paris, Île-de-France, 75008, France
Visit Website
Give us feedback 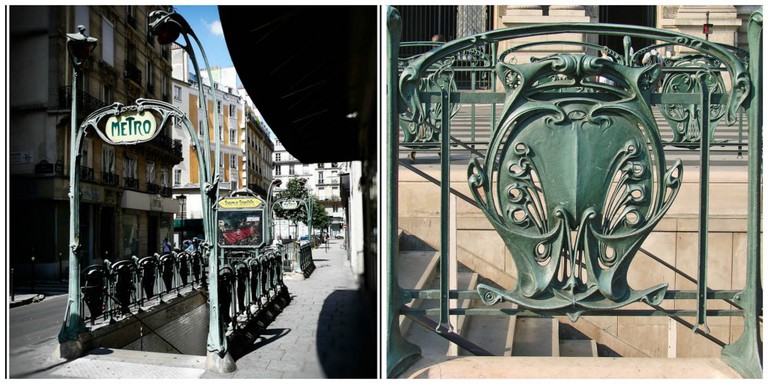 Reaumur-Sébastopol metro entrance | © Randolph Croft ; Metro entrance detail │© Jean-Pierre Dalbéra
When it first opened in 1904, Réaumur – Sébastopol went by the name Rue Saint-Denis, until it was rebranded three years later. In a slightly narrower form, it is a good example of Guimard’s second, roofless design. The Métropolitainsign is held between two ornate lampposts, whose fluid, ornate curves represent the stem of a plant. The orange lamps at their tops are enclosed by leaves similar to those of the brin de muguet, or lily of the valley, which is the flower traditionally given on Mothers’ Day in France.
Open In Google Maps
Paris, Île-de-France, 75002, France
Give us feedback 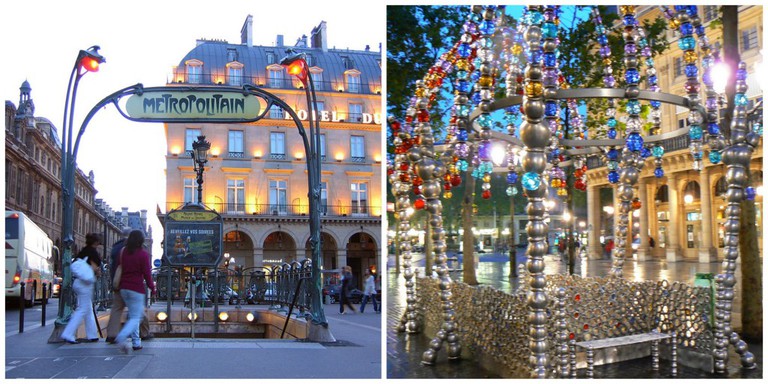 Palais-Royal – Musée du Louvre Guimard entrance | © Simon Law ; Kiosque des Noctambules © dierk schaefer
Palais Royal – Musée du Louvre is one of the eight original stations on the M1 line. The station has five entrances, four of which are in the original Art Nouveau style and one which is rather different. Again, to mark the metro’s 100th birthday in 2000, the entrance at Place Colette was replaced with a contemporary work of art, the Kiosques des Noctambules by Jean-Michel Othoniel. It is an arched structure, composed of many strands of differently sized and colored glass beads. Like Guimard’s designs when they first appeared, it split opinion amongst critics and the public.
Open In Google Maps
Paris, Île-de-France, 75001, France
Give us feedback 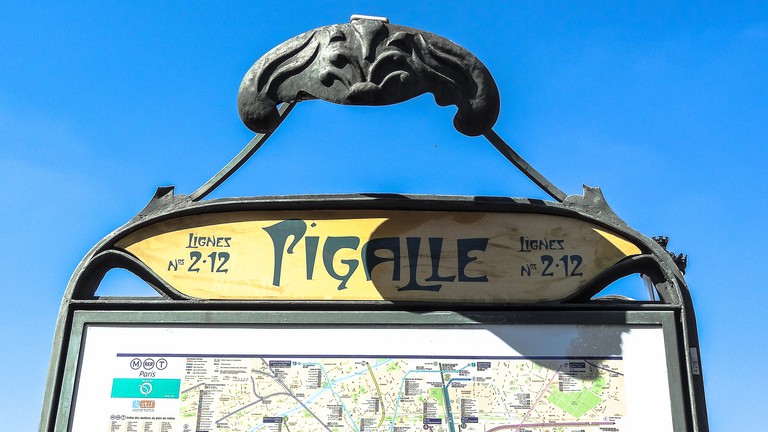 Pigalle metro │ | © Yann Caradec
Of the 141 entrances that Guimard installed around Paris between 1900 and 1912, Pigalle is one of just 86 that can be seen here today. Many were destroyed as tastes changed over the 20th century and before they became historic monuments in 1978. Others were shipped around the world as gifts from the city and as emblems of the Art Nouveau movement. You can find a Guimard entrance in numerous North American cities including New York, Chicago, and Montreal.
Open In Google Maps
Paris, Île-de-France, 75018, France
Give us feedback
Give us feedback