Bike tour across the Pont Vieux | © Karoly Lorentey/Flickr
Though less famous than the medieval Citadelle of Carcassonne, La Bastide offers many historic sights away from the more touristy hype of the La Cité. Built in the 13th century by Saint Louis, from whom it takes its name, La Bastide is a sweet, walkable district of narrow, twisting cobbled streets built on a grid around the main square, Place Carnot. Once completely surrounded by fortified walls like the Citadel, these have since been totally destroyed and replaced by bustling boulevards. La Bastide is the type of neighborhood built for a day of leisurely exploration on foot, so get your walking shoes on (or grab your bike) and check our list for the top ten things to see and do as you stroll through this precious part of Carcassone.
Bike tour across the Pont Vieux © Karoly Lorentey/Flickr

Pont Vieux literally means ‘old bridge’, and it goes over the river called Aude. It dates back to the 14th century, and until the 19th century it was the only link between la Bastide and the medieval city, forming a crucial connection between the higher and lower areas of the Carcassonne. Therefore, Pont Vieux was also the central point of many encounters and negotiations among the citizens of the two sides, which were often in conflict. At the entrance to the bridge, the chapel of Notre-Dame de la Santé is the sole surviving trace of the city’s oldest hospital. On the contrary of the new bridge, Pont Vieux is only for pedestrian use, and it is still perfect to quickly access the old medieval citadel. 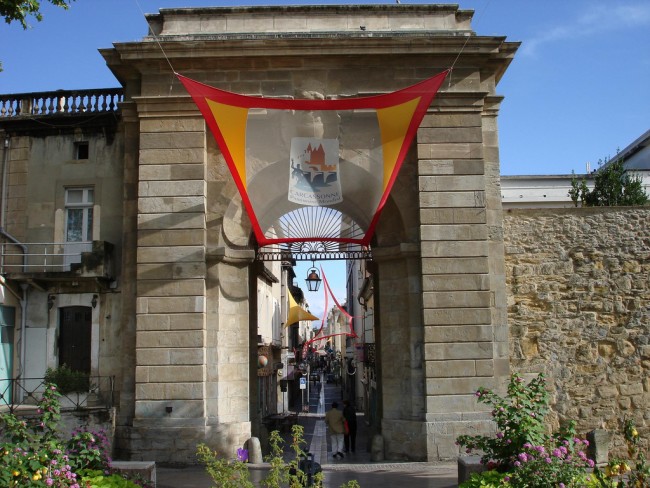 After crossing Pont Vieux, and turning left, you will find yourselves in Boulevard Pelletan. This boulevard, like many others in la Bastide, was designed when the defensive walls that used to surround this quarter were destroyed, smoothing over the ditches that once served as a defense from exterior attacks. Not far from Boulevard Pelletan you’ll find Porte des Jacobins, an 18th cenutry portal which was created to replace an ancient entrance to la Bastide that was equipped with drawbridges. It is the sole surviving example of the four gates of the city fortifications which used to surround the lower city, built between 1355 and 1359. First constructed in 1778, the gate was then rebuilt in its present position a year later in 1779. 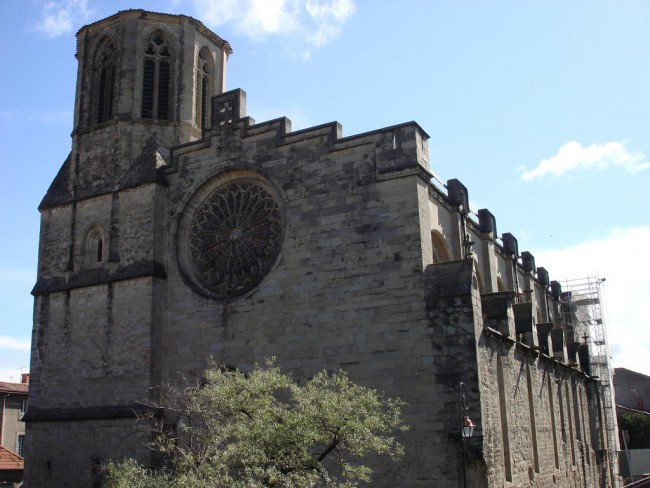 Cathedral
Saint Michel Cathedral was built in the 14th century in a Gothic style with clear influences of the Languedoc region. However, it wasn’t recognized with the title of cathedral until 1803. It was partly destroyed by a fire in 1849, and it was the first of Carcassonne’s monuments to be renovated by the famous architect Viollet-le-Duc. Highlights to look out for exploring this cathedral include the gorgeous stained glass display to the side of the choir, dating back to the 14th century, and a statue of Notre Dame de la Rominguière from the same era situated inside the cathedral. In the exterior, some remnants of the defensive walls are still visible on the side of the cathedral facing the boulevard, where you can also examine arches that once belonged to the old Maison Grassalio, dating back to the 14th and 15th century.
More Info
Open In Google Maps
52 Rue Voltaire, Carcassonne, Occitanie, 11000, France
+33468251448
Visit website

Maison du Sénéchal was built in the 14th century, and it was one of the few buildings of la Bastide that was not damaged by the fire of 1355, which was allegedly created by the so-called Prince Noir (the Black Prince), an ominous moniker for Edward of Woodstock (of the House of Plantagenet). Of particular beauty are the twin large windows of Maison du Sénéchal, as well as its ogival portal with a Gothic style arch.

Situated in rue de Verdun, which heads towards place Carnot, is the Hotel de Fornier-Dupré, built in 1768. Among the people who inhabited this building, the most renowned is the poet and writer Joë Bousquet, who lived here at the beginning of the 20th century. Bousquet withdrew from the world after an injury in the First World War left him paralyzed in near-constant pain, but from his bedside in Carcassonne, he produced a prolific body of haunting surrealistic work as well as correspondences with many famous artists of the era. Those interested in Bousquet’s life and work will also find a permanent exhibition honoring him at the Maison des Memoires in the center of town. 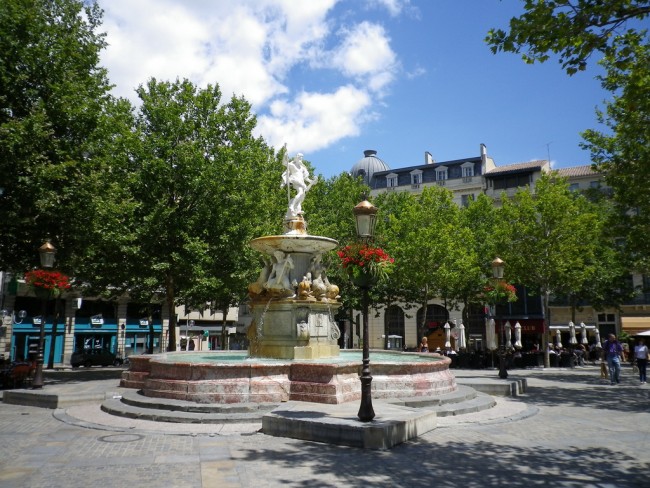 Place Carnot is the central square of the city around which the gridded plot of la Bastide branches out. It’s also the favorite meeting point of locals and of famous literary personalities such as Balzac and Stendhal, who both loved this market square. At the centre of this magnificent square you’ll see the Neptune fountain, which was crafted in the 18th century by the Italian father and son duo Barata. Come to Place Carnot on a Tuesday, Thursday or Saturday morning to explore the weekly local market. Here you can also have a cup of coffee or tea in one of the many welcoming cafés dotting the square, many of which have their own terraces for lazy hours spent people watching.

Canal du Midi was realized in the 17th century by Pierre-Paul Riquet, and it is listed as a UNESCO World Heritage site since 1996. The path alongside the canal makes Canal du Midi a perfect spot for a romantic promenade, or for an invigorating biking tour on a bright summer day. If you’d rather stay stationary and let the river do the moving for you, there are also resources for a relaxing boat ride down the canal.

Built in the 18th century, this building was the residence of the Murat family until the French Revolution. The Murat were a family of magistrates and one of the richest houses of Carcassone, able to afford their very own palace in la Bastide. The building was confiscated by the State in 1792, and in 1826 became the Episcopal palace, which was its function until 1906. Today it is home to the Chamber of Commerce and Industry. Through it all the building as maintained its stately, fine façade, which overlooks a beautiful courtyard and a large old carriage entrance on the street. 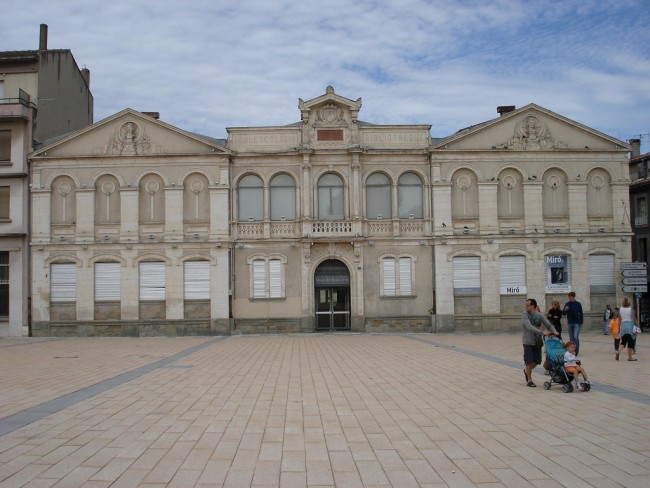 The Old Présidial – Museum of Beaux Arts and City Library

The Old Présidial is situated in boulevard Pelletan, and it was built in the 17th century. This building used to be the local courthouse, but today it houses the Museum of Beaux Arts and the city Library, which were both established in 1836. Gallery-crawlers will find a collection of European paintings and sculpture ranging from the 17th century to present day inside the museum, while architecture buffs might pause outside to take in the neo-Gothic façade, which was built after Carcassonne’s defensive walls were destroyed.

The Market Hall was built in 1768, on the former site of the old ecclesiastical courts and the Sainte-Marie church. Today, it’s the bustling venue for Carcassonne’s biggest and busiest indoor market, which operates daily from Monday to Saturday. You’ll also find the Grain d’Aile Media Resource Center here, which offers an informative look at the old Corn Exchange where grains and cereals were once traded in the marketplace. Today, shoppers at the Market Hall will find a range of enticing regional produce from the region, from farm-fresh fruits and vegetables to local meat, charcuterie, fish, and poultry. This is a smart stop for anyone visiting Carcassonne who has a kitchen built into their hotel or hostel accommodations.